Wonderkids are a regular feature of modern football, and the conveyor belt of players touted as England’s next top star often sees those hot prospects come and go in the blink of an eye. On occasion, though, a gem will emerge from the plethora of overhyped stars. When analysing the Class of 2015/16, Tottenham’s Dele Alli stands out as the one graduate that will go on to fulfil his potential by becoming a key member of the Three Lions setup.

It can be very easy to get carried away with upcoming prospects. We live in an era where youngsters can be built up before they’ve even hit secondary school. Highlight reels and documented success at youth level can manifest itself in huge expectations; if that’s followed by an impressive introduction to senior football, forecasts will surface from fans and media outlets alike. In many cases, though, those prophesies will be overblown to excessive proportions.

This phenomenon of overhyping academy graduates has become increasingly common over the past decade. Worse still, the emphasis on short-term achievement that dominates modern football makes creates an even tougher playground for young blood to earn a fair crack at the whip. John Bostock, Micah Richards and Scott Sinclair are just three names on a long list of players that stepped into the limelight early on only to fall away after severe underachievement. While the excitement surrounding most young English prospects is unnecessarily inflated, Alli has the chance to be different. His roots at MK Dons are a vital aspect.

Unlike the bulk of talent across the Premier League academies, Alli has been learning his trade in a senior environment since the age of 16. By the time he arrived at Tottenham, following an initial loan spell back to Milton Keynes, the youngster had already amassed 88 senior appearances. That’s more than many of the current crop makes by the age of 25. Moreover, playing at League One level has developed physical and mental attributes that simply can’t be taught at youth level. Those two and a bit years served as the perfect breeding ground in preparation for his Premier League bow. Meanwhile, his starring role against Manchester United in the Capital One Cup gave a clear insight into the level of quality he possesses.

Unless you are Wayne Rooney, who was built like a man even when he breaking onto the scene at 16, time in the Football League is arguably the greatest apprenticeship available. In addition to inspiring confidence on the pitch, it also instills a level of maturity that is perhaps lost on those that are brought through the ranks of the academies. Premier League apprentices are a far cry from what they were 15 years ago. Young stars at big clubs are given too much, too soon; if the mentality of the individual isn’t right, this position of privilege can have a truly damaging effect. Alli is void of those negative influences, which shines through in the humble and aspirational person that is seen in post-match interviews.

Perhaps more importantly, playing senior football at an early age has fast-tracked Alli’s developed understanding of the game. In his first half-season of Premier League football, the 19-year-old has performed to equally high standards regardless of whether he’s occupied a defensive role or a more attacking berth. The marriage between advanced awareness and natural ability provides him with all the tools to reach the very top, and he couldn’t be at a better place to achieve it.

Having the tools to succeed is one thing, but the importance of being allowed to hone those skills at the top level is another altogether. Mauricio Pochettino has gained a fantastic reputation for trusting young talent. After seeing Harry Kane rise from the peripherals in 2014/15, this season has been all about the emergence of Alli. Racking up Premier League minutes is a fantastic foundation, but it’s the manner in which the Argentine coach has utilised his brightest star that truly sets White Hart Lane as the perfect place for the former MK Dons man to develop.

Alli has been allowed to enjoy a degree of creative freedom. Playing on instincts has resulted in a number of skills and dribbles for the highlight reel; most notably, though, his goal against Crystal Palace at Selhurst Park underlined the fact that he feels confident about trying exciting things. Holding a young player on a leash can be stifling, but Pochettino has no qualms with trusting his youngsters. Nevertheless, his direction and guidance play an equally crucial role. 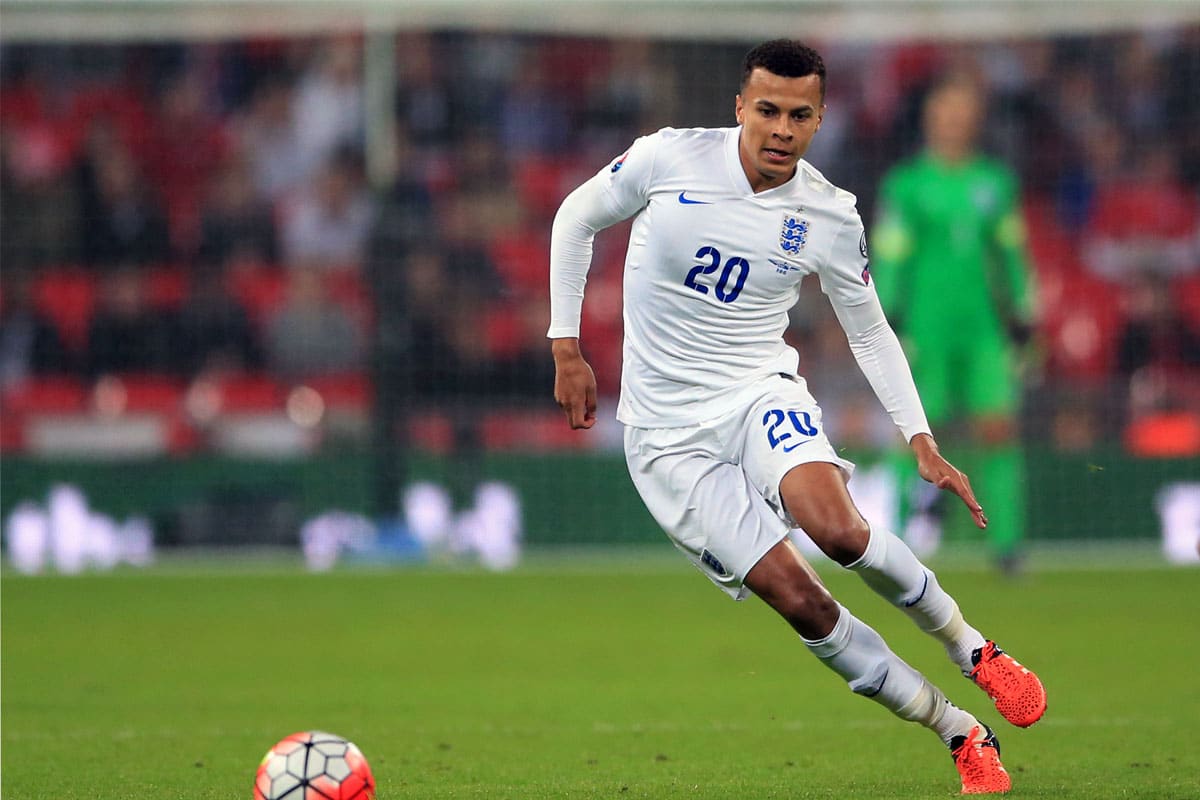 In its purist form, football is a simple game. Whether it’s an Andres Iniesta pass or a ghosting Frank Lampard arrival into the box, the unostentatious can show the beautiful game at his best. Despite his tender years, Alli is already showing clear indications of reading play in a way that allows him to achieve great results from a straightforward tactic. By capitalising on the space vacated by Kane’s attacking movement, the midfielder is able to break and latch onto any balls over the top. While there is plenty more to his game than this, the goal at Goodison Park personified how this one string can strengthen his bow to dramatic effect.

The most pleasing element of Alli’s increasing ability to exploit space is that it underlines his ability to take orders and learn from the week’s training routines. This suggests that he’ll only get better with age and experience. Meanwhile, his 6ft2in athletic build will only benefit as he gains strength of a fully grown adult. Physically and mentally, the midfielder already shows a maturity beyond his years. First and foremost, though, a footballer requires technical prowess to reach the top. Thankfully, that’s something the Spurs man boasts in abundance – as has been shown on multiple occasions in 2015/16.

Alli can defend and attack. He can pass, shoot, dribble and tackle. Above all else, he is a game-changer. Post-Golden Generation rising midfielders will always gain instant comparisons to Lampard and Steven Gerrard. For most, it’s a weight of expectation that can suffocate, especially when the player in question doesn’t possess the same skill set. While the PFA Young Player of the Year favourite is his own man, those links to the former England duo don’t feel too ambitious. Of course, he’ll have a long way to go before emulating their standards. However, his first impressions on the international stage couldn’t have been any greater.

As far as full debuts go, scoring a long-range screamer against France at Wembley is the stuff of dreams. When added to the significance of that night due to non-sporting reasons, that goal epitomised Alli’s invincibility to becoming overawed by the occasion. That signal of intent and self-confidence is a key asset that all top players need to achieve. At a similar age, Cristiano Ronaldo was adamant that he could become the world’s greatest.

Wayne Rooney played with a similar sense of assurance during those early years, whether it was scoring against Arsenal for Everton, netting a hat-trick on his Champions League debut or bullying the Turkish defence in one of his fist international appearances. Alli has shared this trait of actually delivering the goods rather than showing glimpses of promise; if he continues to channel those confident energies in the right manner, there’s no limit to what he can achieve in football.

Another common feature shared by the likes of Gerrard, Rooney, David Beckham, Ashley Cole and other top stars of the 21st century is that they all played at the top level from an early age. Under Pochettino, Tottenham are poised to seal their return to Champions League football for 2016/17. Elite European competition can only encourage further development, particularly in regards to cultural adaption. This could be a crucial enhancement to boost his international credentials. Tottenham’s gain will be England’s gain too.

And while many youthful talents of the last 10 years have fallen victim to the barometer of Gerrard and Lampard, Alli may be the beneficiary of Roy Hodgson’s failure to cement a winning midfield combination since the international retirements of those two players. Injuries have played a major part but, at this moment, it would be difficult to argue against the Tottenham man’s inclusion in England’s starting XI plans – even if he did manage just 25 minutes in the side’s perfect qualification campaign.

Hodgson has shown an eagerness to bed young blood into the fold too. The failure in Brazil two years ago won’t prevent the head coach from adopting this philosophy this summer. Should Alli repay any vote of confidence by replicating the fortunes of Rooney 12 years ago, it could set the midfielder on the road to a hugely successful career at the heart of England’s midfield.

Irrespective of his obvious talents, suggestions that he will definitely become a future England captain are a little premature. In truth, it will be hard to tell until he reaches an age where leadership skills and experience will come into play. But even if he doesn’t become the Three Lions skipper, there’s every chance he could become king of the pride.