That has been the career motto for Werder Bremen’s central midfielder Thomas Delaney, who moved to the Weser-Stadion in January 2017 from FC København.

The 26-year-old is a do-it-all modern box-to-box midfielder, one who can break up an attack in his own penalty area with a crucial tackle, play a great out ball and then run the length of the pitch to finish the counter attack.

With quotes such as “the Bundesliga feels like the Champions League” mentioned in one of his first interviews in Germany, Delaney quickly won the hearts of the Werder faithful.

Yet, he’s always been clear about his dreams of playing in Champions League and in England.

He made his Champions League debut for the club against Barcelona during the 2010/11 season but it was only a one-minute cameo. And it wasn't until he matured in senior football did his career being to take off.

“I went from being a very dominant player that could dribble and tackle to starting from scratch. All the things that I managed to do before didn’t work anymore.”

Such self-awareness took the Frederiksberg native from a youth player who needed three years to crack the København first team, to club captain and Danish international.

But it was the Champions League is where Delaney made a name for himself, and specifically with a stunning strike against Club Brugge in September 2016.

That was scored during his final six months with København, for whom he was named Danish Player of the Year in 2015/16.

During that season his club, in partnership with a betting company, produced a superb 45-minute documentary based on the previous six-months of his career. It painted the portrait of a humble, honest and driven man who was able to pull off the difficult task of relishing the spotlight while managing to stay grounded and genuine.

The search for new motivation took him to Bremen – a northern club with a rich history that had fallen on hard times. Delaney’s assessment that the Bundesliga’s high-tempo, all-action games would suit his “fly in the bottle” style was once again spot on and he’s thrived.

What are Delaney’s strengths?

Delaney’s the ideal midfielder for a side that plays counter attacking football. The Dane is known for scoring and creating goals, with his 5.55 expected goal contribution (expected goals assisted plus expected goals) the seventh highest total of Bundesliga midfielders.

From driving runs forward, set-pieces and shots from distance, the 26-year-old has many different ways of hurting a team.

He’s also one of the league’s best pressing players, his total of 72 successful tackles is the ninth highest total of Bundesliga midfielders.

Additionally, Delaney is a threat in the air with 3.7 aerial duels won won per 90 only bettered by two other midfielders in the German top flight. A sizeable portion of those come from corners, where his presence is felt in both his and the opposition's penalty area.

Due to his excellent mobility and great footballing intelligence, he’s often involved in quick combinations that see him get down the left-wing. The goal that he set up against Eintract Frankfurt is a perfect example: 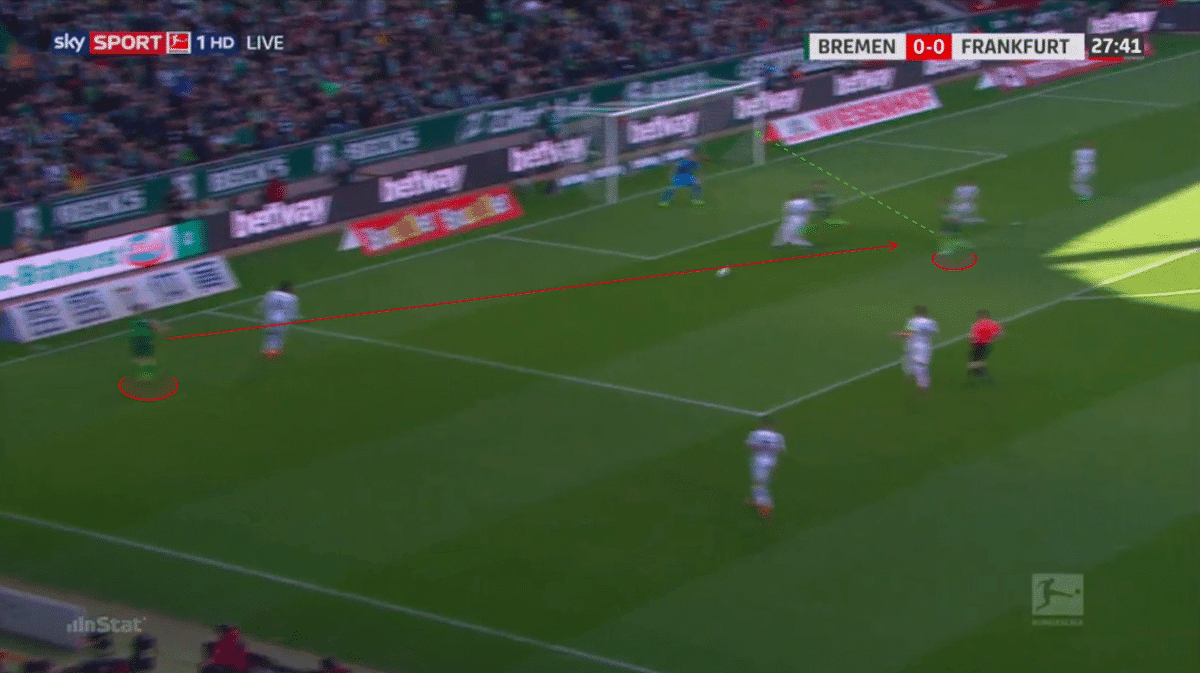 Having smartly spun behind the Frankfurt defence earlier in the attack, Delaney now has time to pick a pass. A perfect low-driven cross finds his teammate Zlatko Junuzovic and he fires into the corner.

It was an excellent assist and highlights the Denmark international's awareness. This season he has played 26 open play key passes the fifth highest total of Bundesliga midfielders.

What are Delaney’s Weaknesses?

There are only a couple of noticeable weaknesses in his game.

The first is that he attempts shots he shouldn't. No Bundesliga midfielder has had more scoring attempts this term than his 53 and yet he xG per shot is just 0.07, a figure bettered by 39 midfielders.

Earlier this season his overeagerness was exacerbated by former Werder coach Alexander Nouri’s ultra defensive 5-4-1 system. By the end of October Delaney had registered 27 shot attempts, 20 of which did not make it on target.

Under Florian Kohfeldt, who took over in early November after Nouri’s ten-game winless run resulted in the sack, Delaney has taken just 24 shots in 19 matches.

He has collected four assists in that time suggesting that he’s successfully channeled his energies into creating more efficient chances for his teammates.

There are also question marks over his passing accuracy, which this season stands at just 72 per cent. He is completing just 29.57 passes per 90 but that can partly be explained by the fact he's playing for a side that doesn't dominant possession.

According to ESPN, Werder, who historically have been prepared to cash in on their stars, will be demanding a fee in excess of €12million for Delaney.

Brighton and Hove Albion were interested last summer and, per Bild, offered the figure Werder will demand 12 months on. A deal wasn't agreed but the Seagulls' interest is set to be revived.

Bremen’s sporting director Frank Baumann has reiterated Delaney wishes to eventually play in England and with the club failing to qualify for Europe, it’s hard to imagine the Green and Whites rejecting bids that match their asking price, a great return on their €2million investment.

Brighton would be smart to seal the deal before the World Cup, however, as Delaney is set to be a key figure for Denmark alongside Tottenham Hotspur star Christian Eriksen.

Spurs, and Everton, have too been linked with the midfielder in the past so the race could be on once the current campaign ends.