Bottom of the table Degerfors go in search of the 3pts that will hopefully take them above GIF Sundsvall and Helsingborg this weekend but that could prove easier said than done as they face the current top six side, Kalmar. The visitors have a good record against their hosts and have impressed so far this season, so really, only 3pts will satisfy Kalmar on Saturday.

Kalmar have outperformed Degerfors in all departments this season and sit 10 places and 16pts clear of Saturday's hosts with both teams having played 15 games in the Allsvenskan this season. Kalmar have won each of their four previous encounters with Degerfors, securing a 2-0 win at home earlier this season and earning the domestic double over them in the previous campaign. The hosts have lost four of their last six league games, while Kalmar have won three of their last six competitive and non-competitive fixtures.

While we're confident that Kalmar will win, we don't believe that there will be many goals in this game judging by the recent results for both teams and their head-to-head record. Kalmar needed just one goal to win away at Degerfors last season and only won 2-0 in their own backyard back in April. Under 2.5 goals have been produced in five of Degerfors' and five of Kalmar's last six matches in all competitions.

All you need to know ahead of Degerfors vs Kalmar

Degerfors hoping to move off the bottom of the table

Degerfors were away at Mjallby last weekend where the two sides played out a goalless first forty-five minutes. Both teams gave as good as they got in this match with Degerfors taking the lead in the 77th-minute through Vukojevic. However, Mjallby got back onto level terms 5-minutes from time and then went on to score a winner in the 88th-minute, undoing all of Degerfors' hard work.

Kalmar would have been expecting a tricky game at home to mid-table Elfsborg and that is just what they got. The two sides went in at the break goalless but Kalmar did manage to break the deadlock early in the second forty-five through Berg. Elfsborg always looked like they could snatch a point but the visitors clearly tired towards the end of the game, probably due to their midweek European qualifier against Molde.

Degerfors: Joseph-Claude Gyau will miss out this weekend through suspension.

Kalmar: the visitors arrive with a clean bill of health and no suspended players. 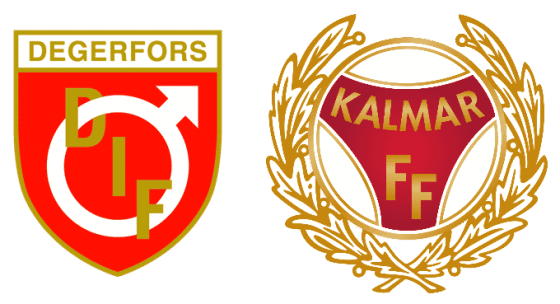