Grégoire Defrel’s big move did not quite work out. After an impressive 2016/17 season with Sassuolo, the French forward joined Roma in a €15million deal and felt prepared to make the step up.

“It means a lot to me to play for Roma,” he said. That much was clear. Defrel had worked his way up from Parma’s youth ranks, joining third tier Foggia in 2011 and impressing enough to earn a move to Serie B Cesena.

By the age of 26, his hard work had paid off. Three seasons at Cesena were followed by a switch to Sassuolo in 2015, and it was with Modena-based club that Defrel began to make a name for himself. He scored 16 goals from 38 appearances in the 2016-17 campaign, enough to convince Roma’s scouts.

Monchi, Roma’s reputable sporting director and transfer guru, had identified Defrel as a prime target. And the Spaniard’s track record suggested the move would be a success.

“I’m really happy to finally add Gregoire to our squad,” Monchi, said. “He was a priority for us because he is exactly the type of forward we were looking for. He can play in three different positions, he’s quick, he plays for the team, he gives us depth and he has a great nose for goal.”

Those traits remain but, unfortunately for Defrel, he struggled to find consistency in his first season with Roma. One goal in 20 appearances was not the return Monchi had envisaged, and so the Frenchman found himself on a season-long loan at Sampdoria.

And it seems he is comfortable there. Defrel has again excelled, scoring six goals in 18 Serie A appearances so far this season. And that form has led, once again, to interest from other clubs.

This time, though, the 27-year-old could be set for a move abroad. He has been linked with several Premier League clubs during the January transfer window, including Watford, Fulham and West Ham United. 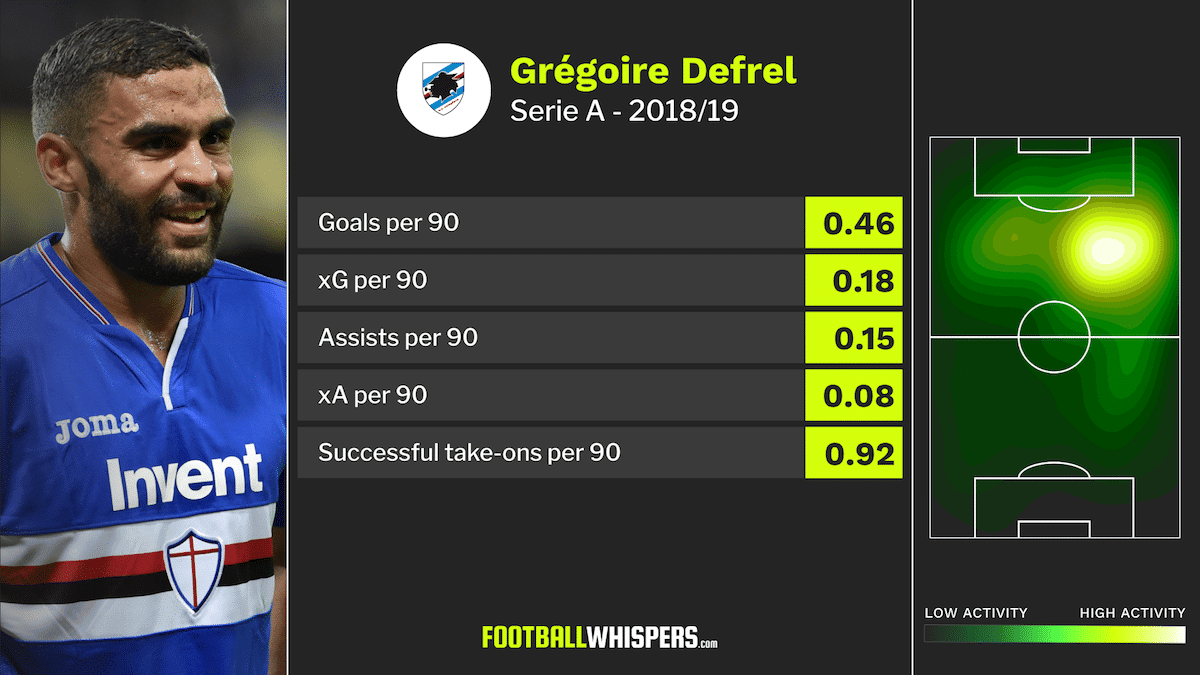 Defrel is a talented player and would offer plenty to improve each of these clubs. But he is not prolific. This season, he is scoring at a rate of 0.46 goals per 90 minutes, it's impressive but not quite good enough to put him amongst the division’s best goal scorers.

There is more to his game than just goals, though. Defrel is quick and powerful, an accomplished dribbler and adept at bringing attacking team-mates into the game. He is capable of holding the ball up and playing with his back to goal, but equally effective when running at defenders.

That is evident when looking at his stats: Defrel averages 0.92 successful take-ons and 3.46 touches in the opposition box per 90 minutes. He also plays an average of 10.29 backward passes per 90, amongst the highest in the division and an indication of his effectiveness as a focal point from which he brings others into play. Only 12.6 per cent of his passes go forward.

Defrel, then, certainly has strengths which could prove helpful for those Premier League clubs interested. He is not likely to take the goalscoring charts by storm upon his arrival, but he will make his presence felt.

The interested parties must now decide whether Defrel is worth the outlay required to bring him in. At 27, he is no longer a young player. But he is in his prime, finding his best form again and proving his doubters wrong after a difficult spell at Roma.

It may be that Defrel is a relatively inexpensive, risk-free option. He is a more well-rounded player than many out-and-out strikers, and he will have benefited from his recent experience with one of Italy’s biggest clubs.

For relegation-threatened Fulham, in particular, Defrel could prove a valuable addition.