Looking just above them, Burnley will see Arsenal, last season's champions Chelsea and the Champions League places. Look below and they will see Liverpool. Yes, the Clarets are sixth, with 12 points from seven games including trips to Chelsea, Liverpool, Tottenham Hotspur and Everton.

There is no two ways about it: it's been an exceptional start.

But, of course, and Sean Dyche would be the first to remind you, it is just that: a start. There are 31 games left. However, nobody can deny the manner in which Burnley have conducted their business this season, particularly on the road.

To put it bluntly, they've been excellent. James Tarkowski has been inspirational at the back, Jeff Hendrick has stepped up recently, while Chris Wood has already suggested that he was a shrewd acquisition, even with the club-record fee the club paid Leeds United to sign him.

However, credit must be given to Burnley's midfield, namely Steven Defour and Jack Cork, another astute piece of transfer business conducted in the summer.

Burnley's sense of togetherness, work ethic and discipline is encapsulated by that midfield duo and it is remarkable to think that, while Defour's future seemed to hang in the balance for much of the summer, Cork was deemed surplus to requirements by Swansea City.

Defour and Cork got off to a flyer against Chelsea in their first game together. As Burnley recorded a momentous 3-2 win over the champions at Stamford Bridge, the pair found themselves in the strange position of dictating the tempo in midfield following Gary Cahill's early red card.

Both players notched an assist, while their accurate passing and tactical nous helped shore up Burnley's midfield and create chances to score.

Defour's pinpoint cross to the far post set up Sam Vokes for his second, Burnley's third, to put them in dreamland after Cork had slipped in Stephen Ward for their side's spectacular second.

The Belgian's passing clocked in at 94 per cent, while Cork's was slightly less at 83 per cent. Between the pair of them, they completed 11 out of 13 long balls, illustrating their confidence and range in possession.

Indeed, operating as the two deeper midfielders in a 4-2-3-1, Defour and Cork immediately gelled as a partnership in a sign of things to come.

One of Cork's most appealing attributes to Dyche is his tireless work-rate. The 28-year-old, who spent a18 months on loan at Turf Moor between 2010 and 2011, has duly proven his worth as one of the hardest-working players in the Premier League.

Cork leads the entire league in distance covered with 85.10km, so it's not difficult to see why the Clarets were keen to snap him up. Remarkably fit, Cork has played every minute of Burnley's league campaign.

But not only does Cork have a lot of miles on the clock; he is alert, astute and effective in breaking up play and shutting down potential counter-attacks. Against Everton, for example, he was effective in stopping Tom Davies, a quick player fresh off the bench, from launching a counter-attack for the Toffees.

Forcing Davies wide, Cork was determined to defend the space behind him. Sticking with his man, he timed a tackle to perfection and scooped the ball away from the Everton midfielder, showing an impressive combination of strength, aggression and timing in the process. 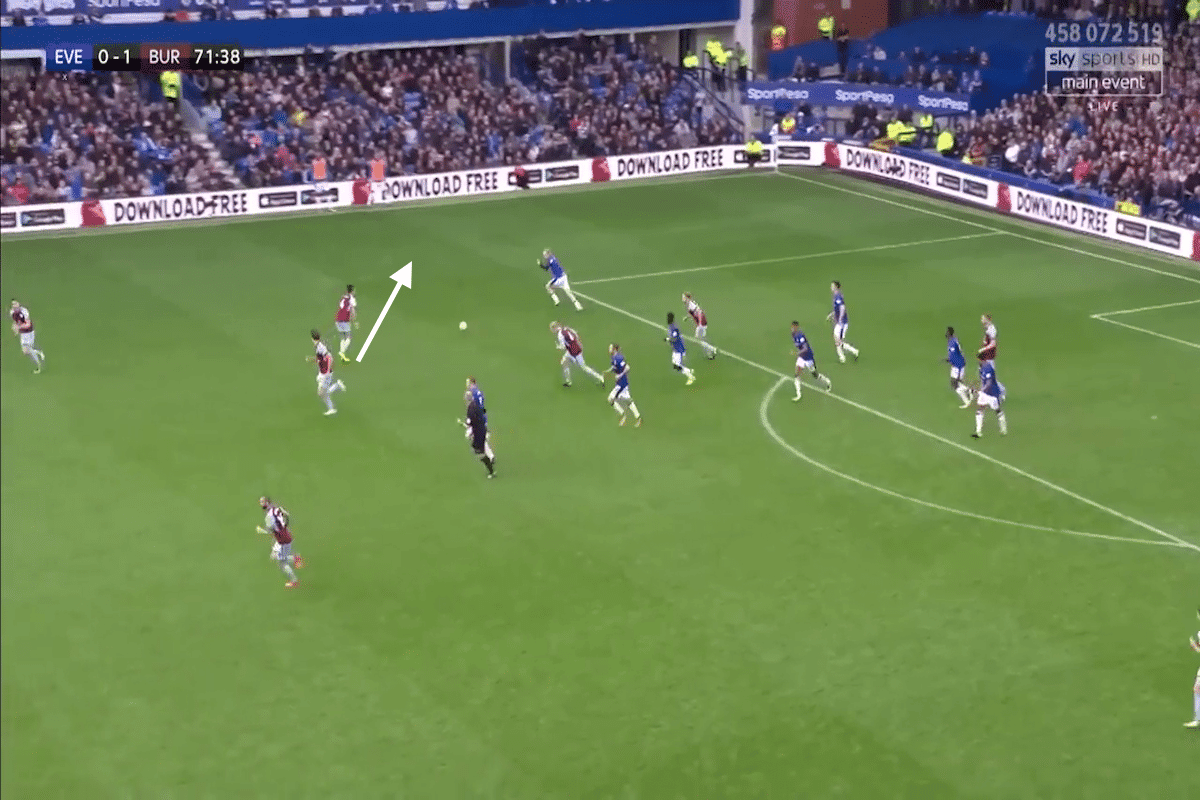 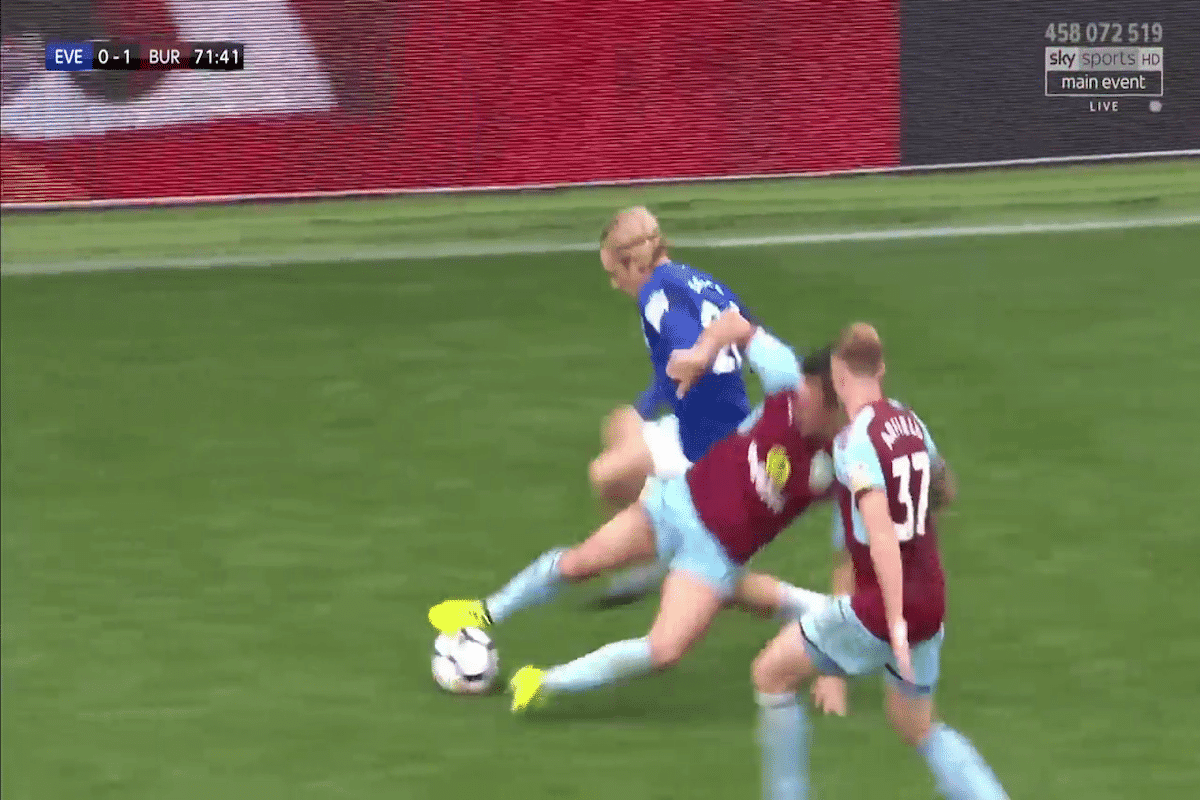 Beyond his work-rate, though, Cork has slotted seamlessly into Dyche's structured unit, which is built around solid, organised defending and midfield protection. Cork is currently third in the most blocks stats this season with 12.

The two players above him are his teammates Ben Mee and James Tarkowski, so Cork has evidently had no problem committing himself to the Burnley way. He is brave, dilligent and, importantly, gets his body in the way (Burnley have blocked more shots than any other team with 61). They're important parts of a skillset that Dyche looks for in a holding midfielder.

Dyche values such contributions very highly, which is why Cork has become such an important figure for him already.

However, Defour is not to be outdone. The former Porto and Anderlecht man, who has 51 Belgium caps to his name, has transformed his fortunes at Turf Moor to become a vital instrument in Dyche's midfield.

Signed in August 2016 for £8million, Defour struggled with form and fitness last season. He didn't kick a ball in February or March and, after spending most of his time on the bench after a return to full fitness, many speculated that he would be headed for the exit door in the summer.

However, Burnley struggled to find a buyer for him. In response, Defour got his head down and worked hard through a gruelling pre-season and is now reaping the benefits.

Indeed, following the Chelsea win, Dyche hailed Defour's renewed appetite for the Premier League after focusing on adapting to the league's physical demands.

“There are no guarantees but he looks like he's fitter, he's adapted better, he understands the tempo of the game better and that it's physically demanding, particularly here; they (Chelsea) have got some very powerful players, they're a big, athletic side,” Dyche said.

“We know he can play, his ball for the goal is absolutely fantastic, so we know that. I think he's mentally adapting as well.”

Against Crystal Palace, Defour showed how he is reading the game better. Below, you can see him reacting to Jason Puncheon being left in space. If the ball reaches Puncheon, he has time to turn and pick a cross, but the Belgian closes him down before the ball even reaches him, pre-empting the danger. 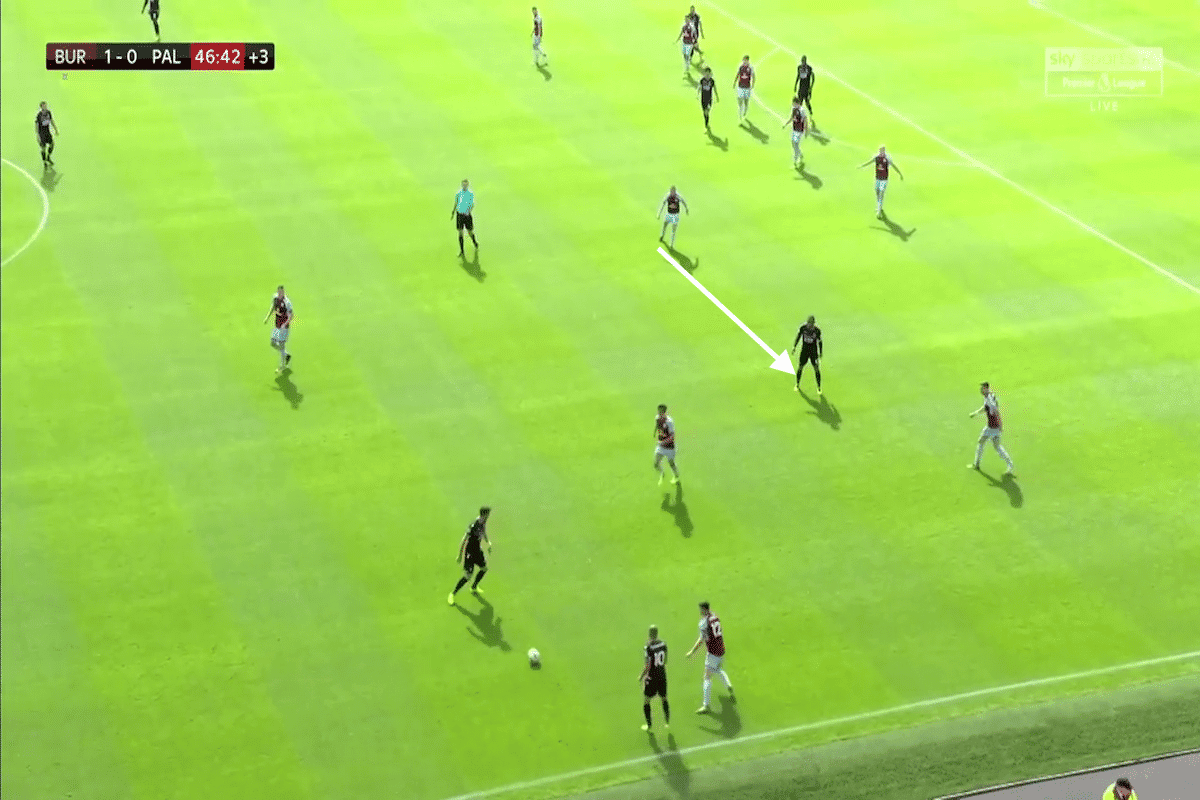 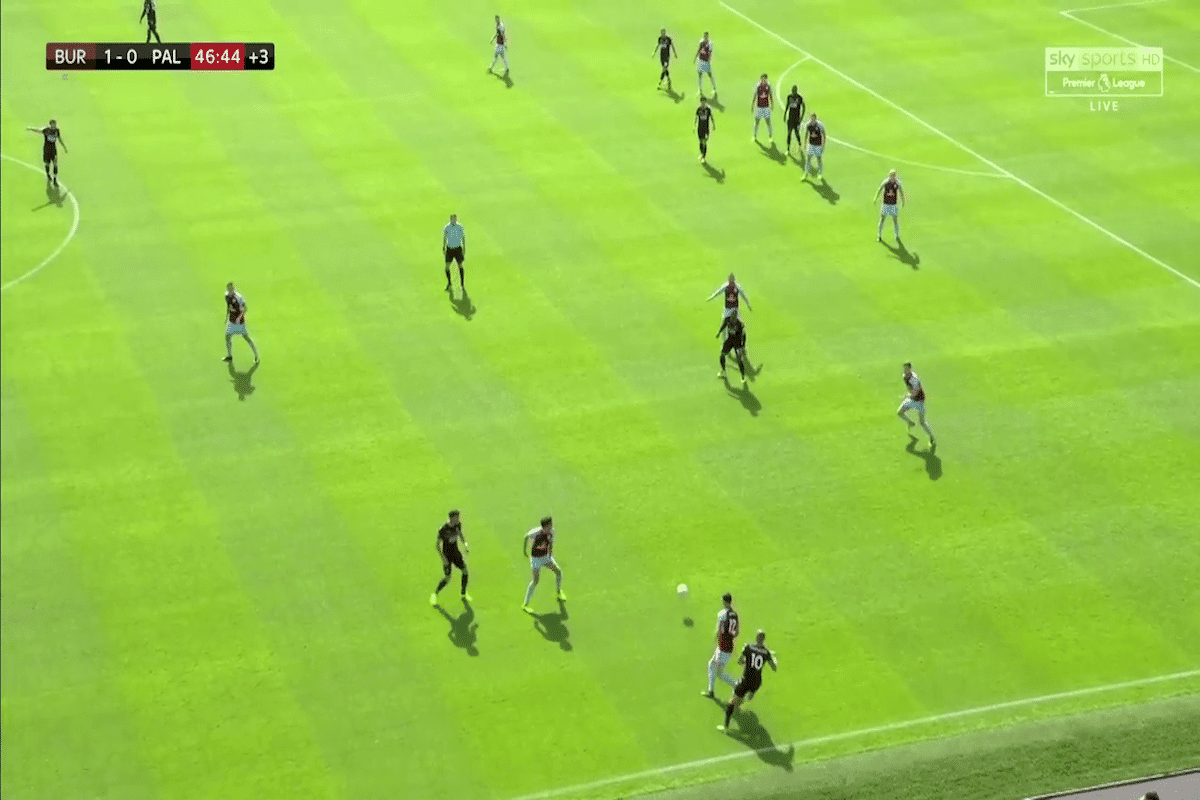 Not only does Defour win the ball cleanly, he drives into space ahead of him and picks out a forward pass to turn defence into attack. 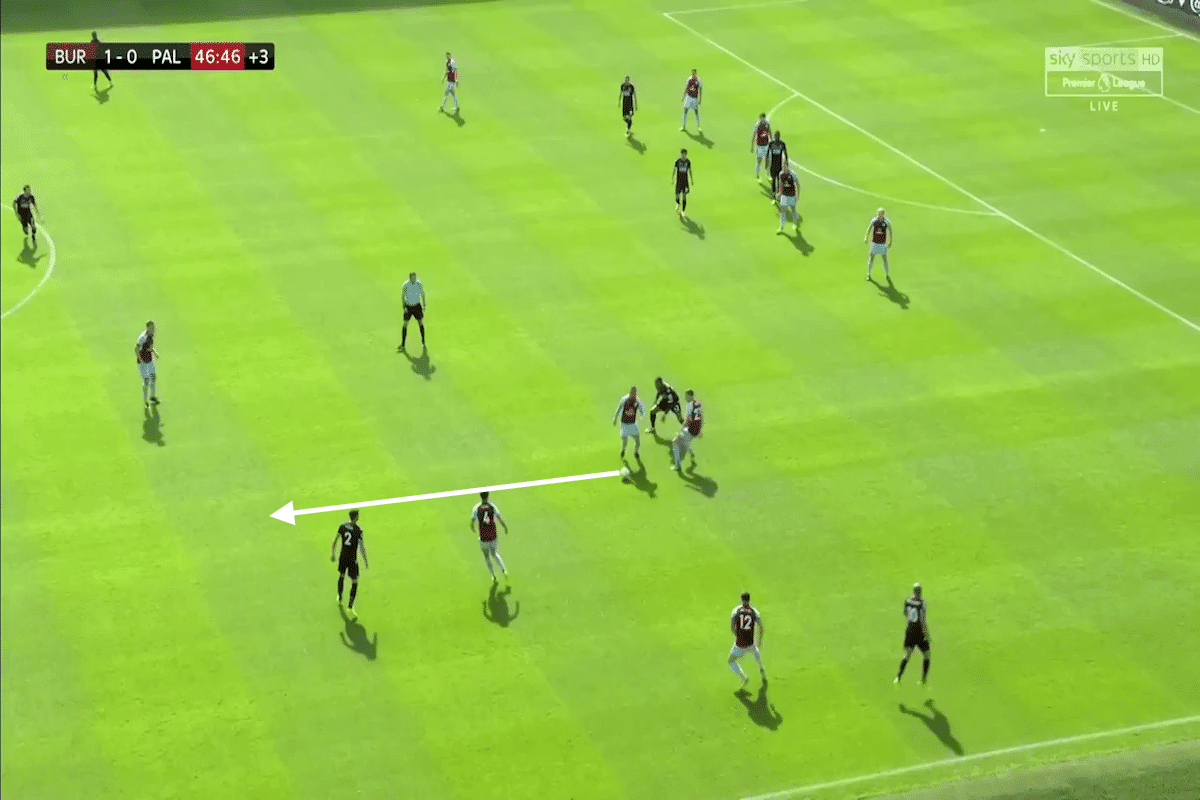 This was not an isolated incident. With 22, Defour has made more interceptions than any other player this season – a numerical indicator of his ability to read the intentions of the opponent and cut off attacks at the source.

With a passing accuracy of 83 per cent, four key passes made and 100 per cent of dribbles succeeded (four out of four), Defour knows how to use the ball: when to play a short pass, a long ball, backwards, forwards, or take the defender on.

Dyche has praised Defour's ability to play intricate pass combinations that create space, a measure of the midfielder's increased confidence. Against Spurs, Defour created a chance through a simple pass-and-move, playing a one-two with Robbie Brady to make a yard for himself. 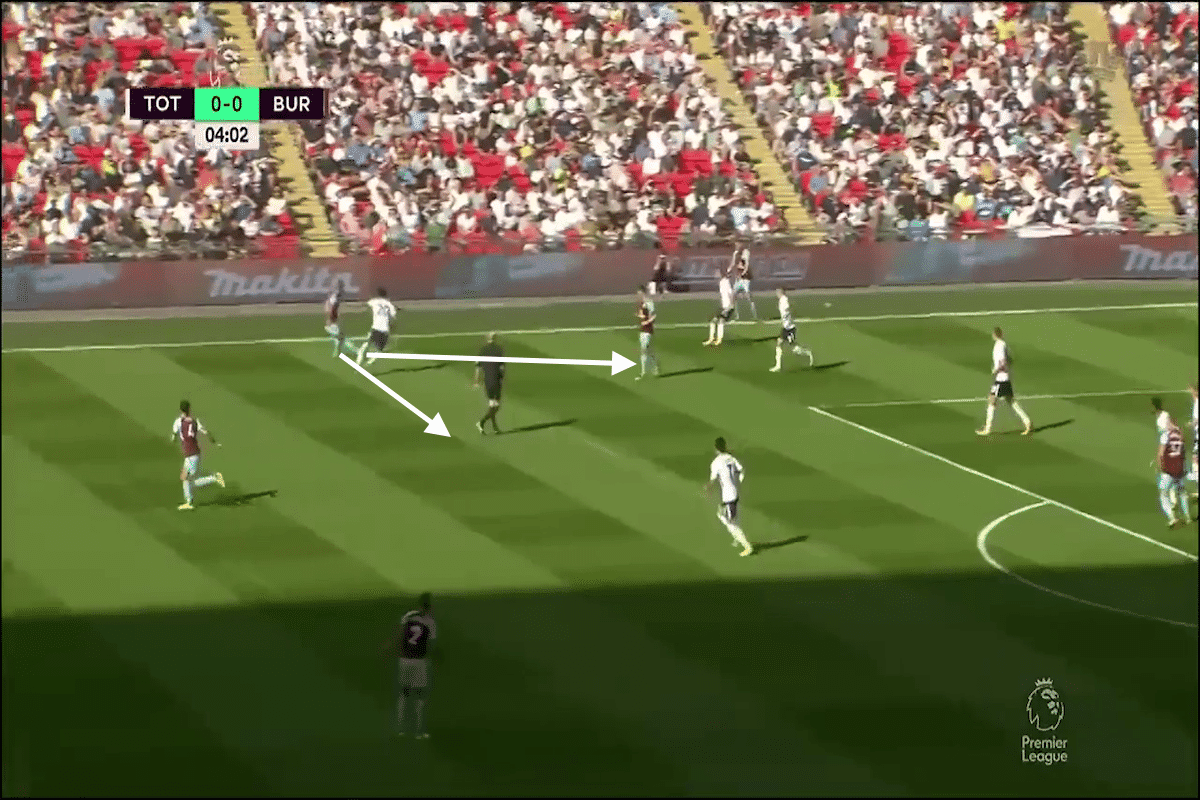 Having skipped past Dele Alli, Defour gets his head up, assesses his options, spots Wood's run into space on the edge of the area and plays a disguised reverse through ball to the striker, showing how he brings vision and craft to this Clarets side. 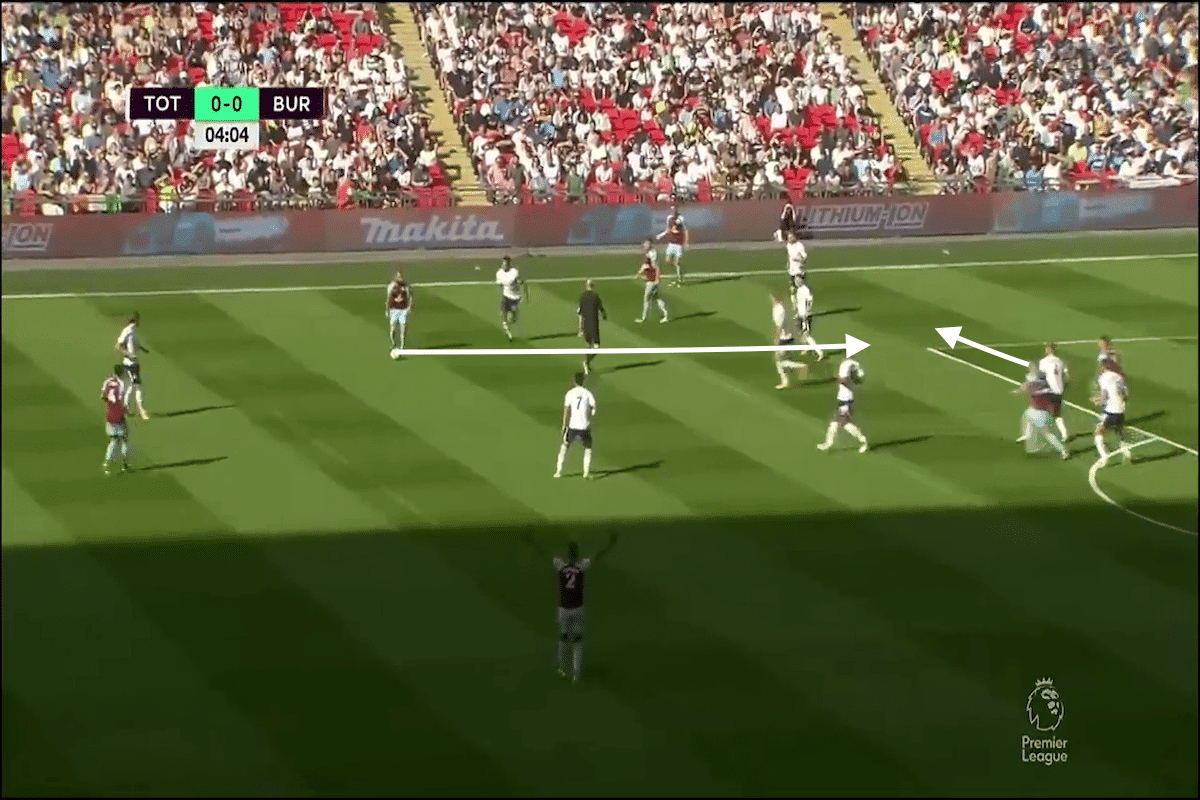 Burnley are hoping to maintain their bright start to the season when they entertain West Ham United on Saturday. Tough games against Manchester City and Newcastle United loom after that, and if the Clarets are to continue to be the anomaly in the Premier League's top-six, their dependable midfield duo of Cork and Defour will be crucial to their success.