Much has been made of Chris Wood's 24 goals for Leeds United this season. The Kiwi leads the race for the Championship's Golden Boot but he has taken the headlines from the Whites' impressive backline.

Garry Monk's side head to the Madejeski Stadium on Saturday for what is sure to be an ill-tempered and fiercely competitive clash against play-off rivals Reading.

When the two sides met at Elland Road in December Leeds ran out 2-0 winners despite seeing just 23 per cent of the ball. Afterwards, Royals manager Jaap Stam said the hosts' style of play was “not my cup of tea”.

Reading striker Yann Kermorgant poured further fuel on the fire ahead of Saturday's teatime clash when he told the Reading Chronicle this week that the Whites had “no plan B”.

“We know it’s going to be a tough test. We could end up facing Leeds in the play-offs,” Kermorgant said.

“They have one striker who scores almost all of their goals. It’s good for him but it’s dangerous for the team because if he gets injured they have no plan B.”

Kermorgant and Reading might get the chance to test that theory on Saturday. Wood returned early from international duty with New Zealand with a knock.

The extent of the injury is not known but even if he does miss the trip to Berkshire, Reading will have to find a way through United's imperious backline – the third-tightest in the Championship with just 36 goals conceded in 38 games.

And therein lies the issue Stam failed to acknowledge after a Wood-inspired Leeds triumphed in the first meeting between the sides at the end of 2016.

Despite having 77 per cent of the ball, the Royals mustered just two efforts on target.

Leeds, on the other hand, had less than a third of the possession enjoyed by their visitors, just two shots on target and clinched three points regardless. 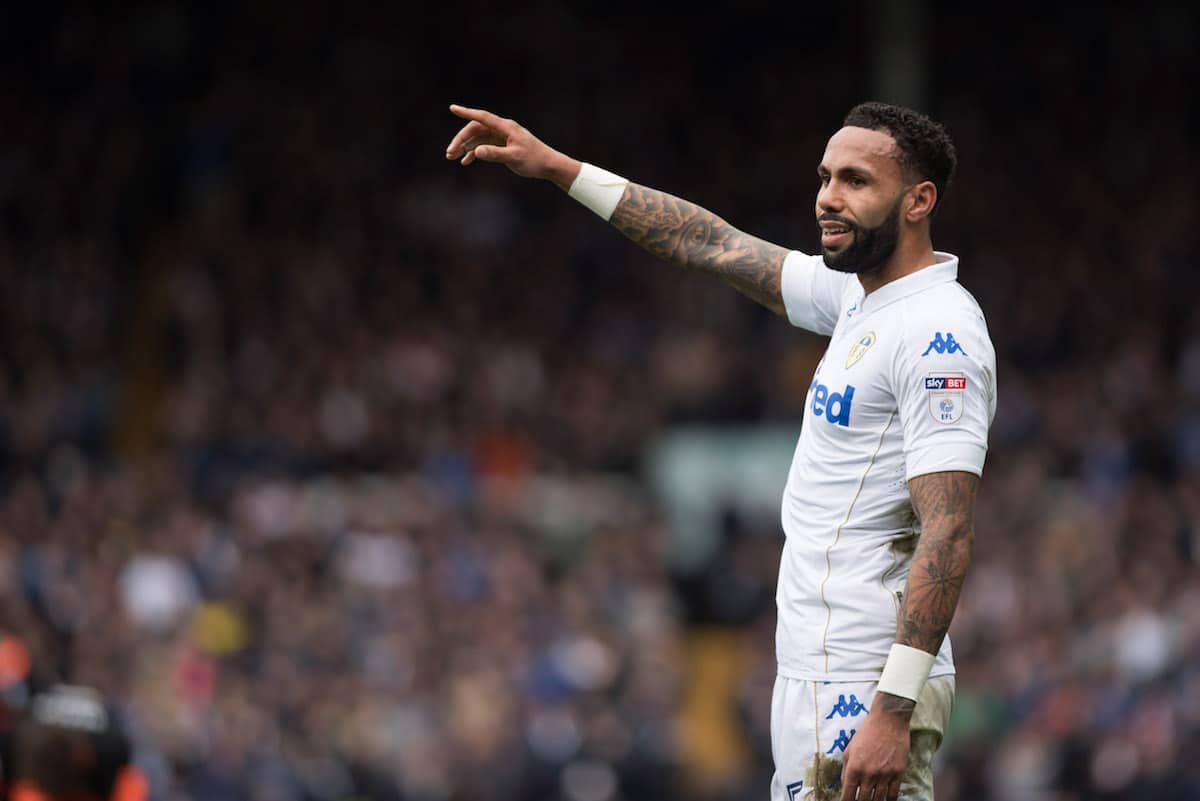 READ MORE: IS THERE MORE TO LEEDS THAN CHRIS WOOD'S GOALS?

How've they done it?

There is nothing particularly nuanced about the way Leeds set up. Monk's favoured 4-2-3-1 system means two deep-lying midfielders protect the back four. Skipper Liam Bridcutt is usually paired next to the more adventurous Ronaldo Vieira or Republic of Ireland international Eunan O'Kane.

Former Chelsea youngster Bridcutt is a tireless ball-winning midfielder who snaps about all over the field winning possession for his side before allowing the more creative players to play forward. 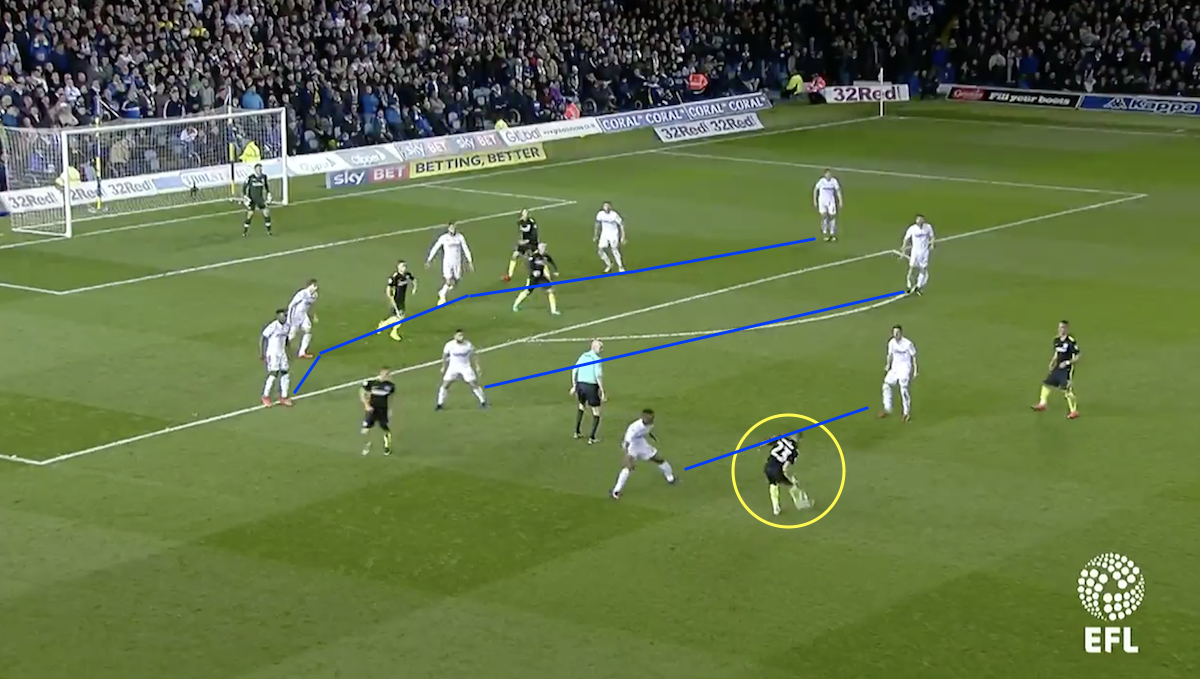 But the rest of the Leeds side work hard too. Monk evidently has them well drilled and when they are out of possession the Whites quickly press to win the ball back.

In the example below, taken from their 2-0 win over Brighton & Hove Albion prior to the international break, Leeds have conceded a throw deep in their half. Albion return to the ball to play but are quickly hounded into going back towards their own goal. 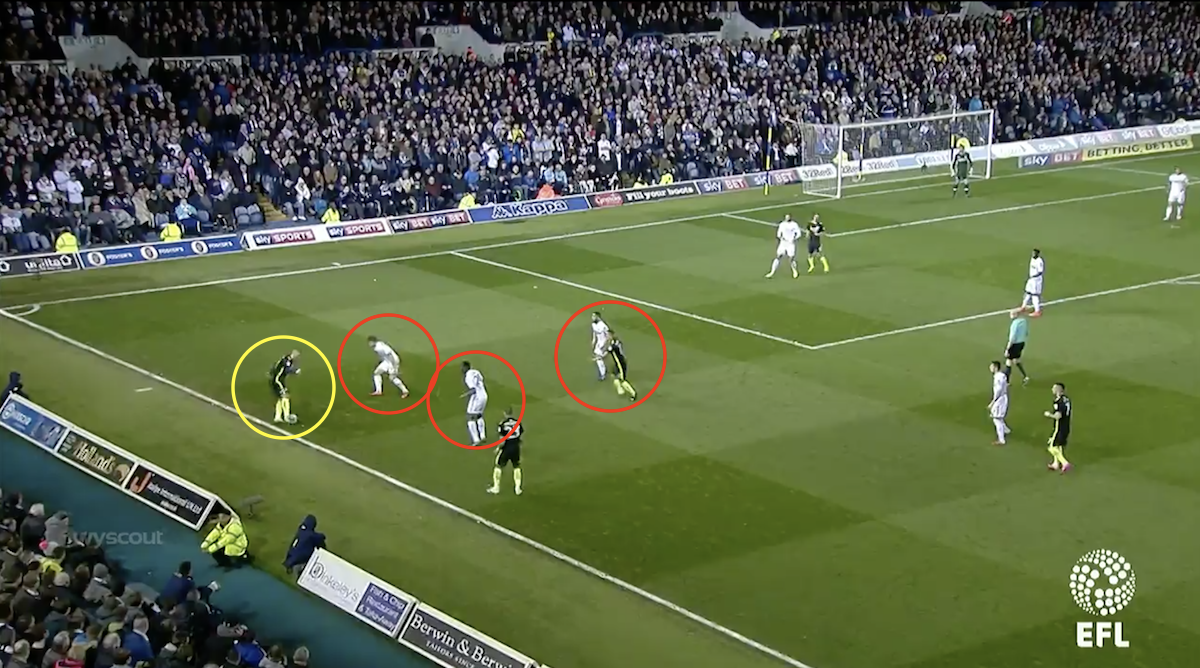 Leeds force Brighton back into their own half leaving Lewis Dunk with a square ball to his right or a more risky ball out the right flank. 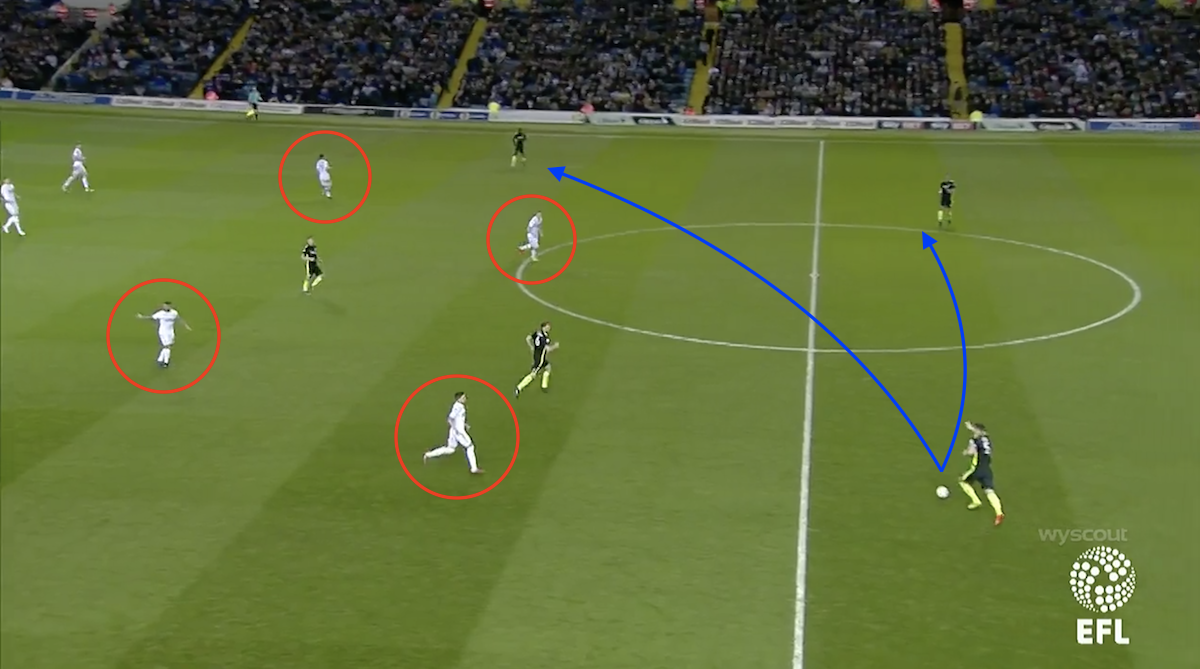 Later in the same game, Brighton striker Sam Baldock picks up possession 25 yards from goal. With six Leeds United bodies in front of the ball restricting his options Baldock decides to shoot. He fails to trouble Rob Green and United's job is done. 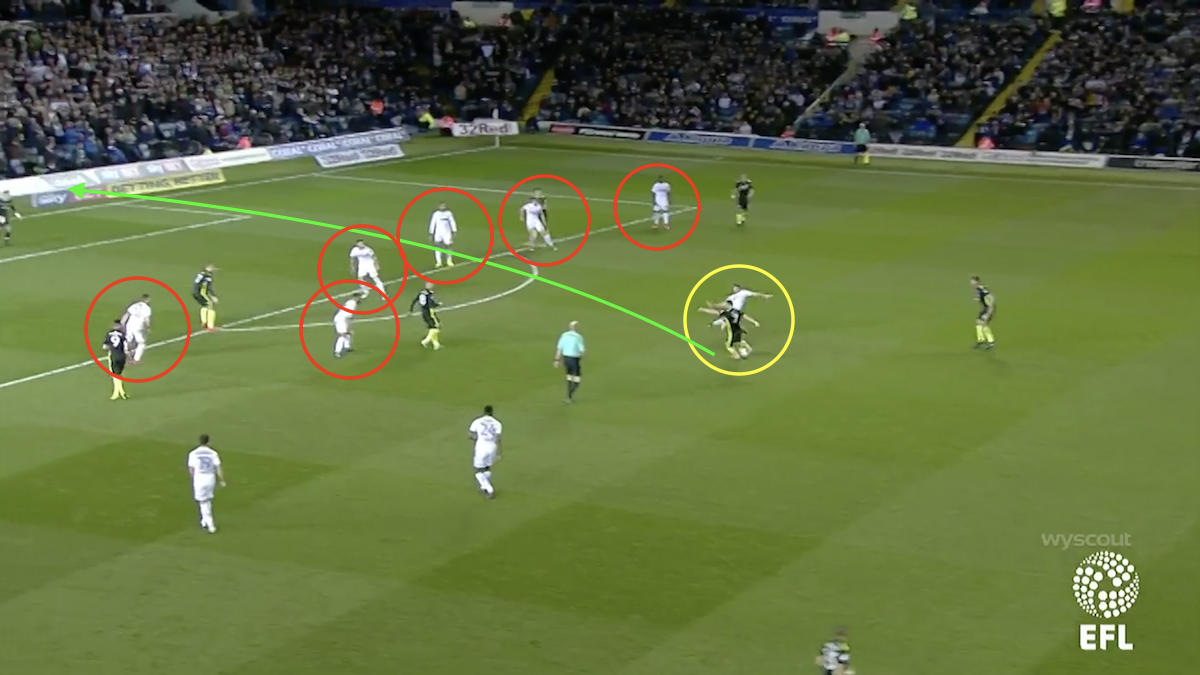 On the occasions Leeds are broken down their opponents find a rigid back four in the way.

Right-back Luke Ayling has been one of the unheralded stars of the season while the centre-back pairing of Kyle Bartley and, in particular, Pontus Jansson has won plenty of plaudits.

Jansson has already agreed a permanent move from Torino for the end of the season but Southampton are among those linked with the Sweden international.

Left-back is the one spot not sewn up with Charlie Taylor and the underrated Gaetano Berardi juking out it for the number three shirt. Homegrown prospect Taylor has made the most appearances this term, however. 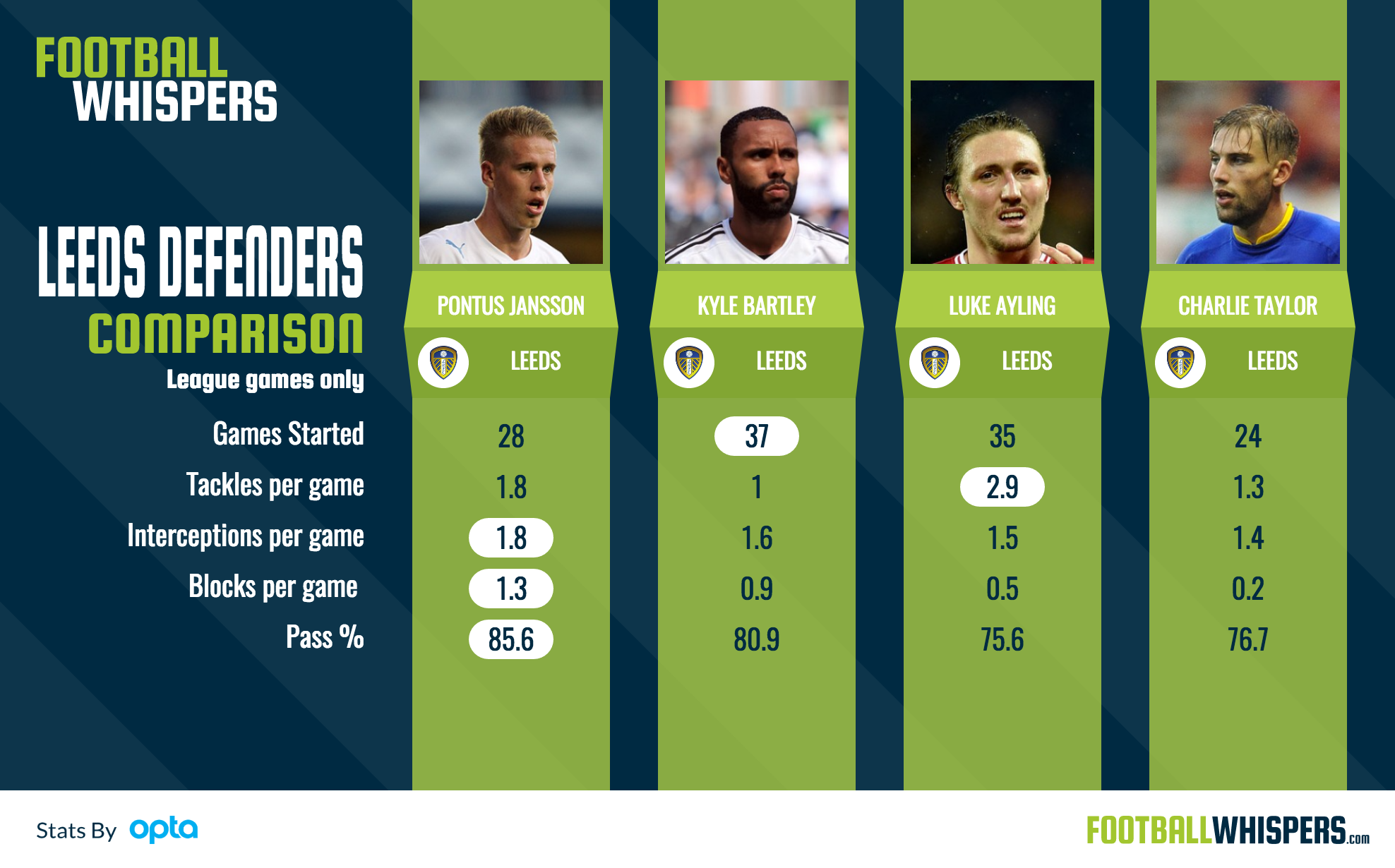 NOW READ: HOW GARRY MONK HAS LIFTED THE CLOUD OVER LEEDS UNITED

Former Leeds defender Sol Bamba, now at Cardiff City, averages 3.6 interceptions – the most in the Championship. The fact Jansson leads the way for Monk's men with just 1.8 tells you the Whites engage their opponents to try to win the ball instead of sitting back and waiting to pick off interceptions.

The recipe for success

With Wood spearheading their attack and in the form of his life Leeds have a reliable source of goals. At the back they are more than solid and in Green they have one of the most reliable and in-form goalkeepers in the second tier.

That combination is everything needed for a successful team. Of course, more players chipping in with goals is desirable, in line with Kermorgant's critique, but the Royals forward should worry about the real matter at hand: finding a way through Leeds' defence on Saturday evening.