No-one better encapsulates Watford‘s decline this season than captain Troy Deeney. The battering ram forward has, like his team, seen his star wane dramatically. Now he finds himself out of form, out of favour and, maybe, out of time at the club.

Deeney, unlike those inside Vicarage Road, could see what was going to happen when he set off in the 33rd minute of Watford's defeat to Huddersfield Town on December 16.

Already trailing to goals from Elias Kachunga and Aaron Mooy, the Hornets skipper was clearly frustrated. So when he flew into a full-blooded and ill-advised challenge on Collin Quaner out on the touchline, near halfway, it was out of frustration more than anything.

The 29-year-old had more than earned his crack at the Premier League when Watford were promoted in 2015. After scoring 20 plus goals in three consecutive seasons in the Championship, Deeney was ready to make his top-flight bow.

A return of 13 Premier League goals led to some – admittedly internal – calls for an England cap.

He followed that up with ten in the Hornets' second season in the top tier – no mean feat given the lack of support he received and the dire style of football played under unpopular head coach Walter Mazzarri.

But this term he has scored just twice in the league and is yet to find the back of the net from open play. Deeney's moment of frustration against the Terriers resulted in a red card. The club's subsequent appeal was thrown out by the FA, ruling him out of the Christmas period.

With £18.5million club record signing Andre Gray breathing down his neck and the previously persona non grata Stefano Okaka now back in favour, we ask whether Deeney's time as Watford's first-choice forward is coming to an end.

When Deeney missed the opening-day draw with Liverpool through injury Watford fans got a glimpse into the future. Okaka led the line that day with Gray, fresh from his big-money move, coming off the bench late on to stretch the Reds. Okaka duly scored and was a nuisance the visitors' defence could not handle.

But that was to be the Italian's last Premier League start until he was given the nod against Swansea City on December 30, having come off the bench to change the game in the Hornets' favour against Leicester City four days prior.

If the baseball scouting principle of ‘looking like a player' were to be applied to Okaka then the former Fulham and Roma man would never have turned pro. Despite standing at just 6ft 1in the four-cap Italian international is ungainly. Barrel-chested doesn't quite do his frame justice.

It shouldn't work but it does. Okaka knows how to use his body effectively, how to occupy defenders and he can play a bit too. His link-up play is underrated and he possesses the much-mocked ‘good touch for a big man' a la Stoke‘s Peter Crouch.

Whatever the reasons for his expulsion from the starting XI, Silva has finally seen sense and restored the hulking hitman to the first team in recent weeks.

Gray, meanwhile, has been in and out of the side in rotation with Deeney, never stating more than four games in succession as he struggles to live up to his hefty price tag.

What he does offer, however, is more pace and movement than either Deeney or Okaka. While question marks remain about his finishing – only heightened by a horror miss against Swansea City after going through one-v-one to meet Łukasz Fabiański – he is by some distance the most mobile of Watford's striking options.

So if Okaka is the targetman and Gray the poacher, what does Deeney bring to the Hornets' starting XI? 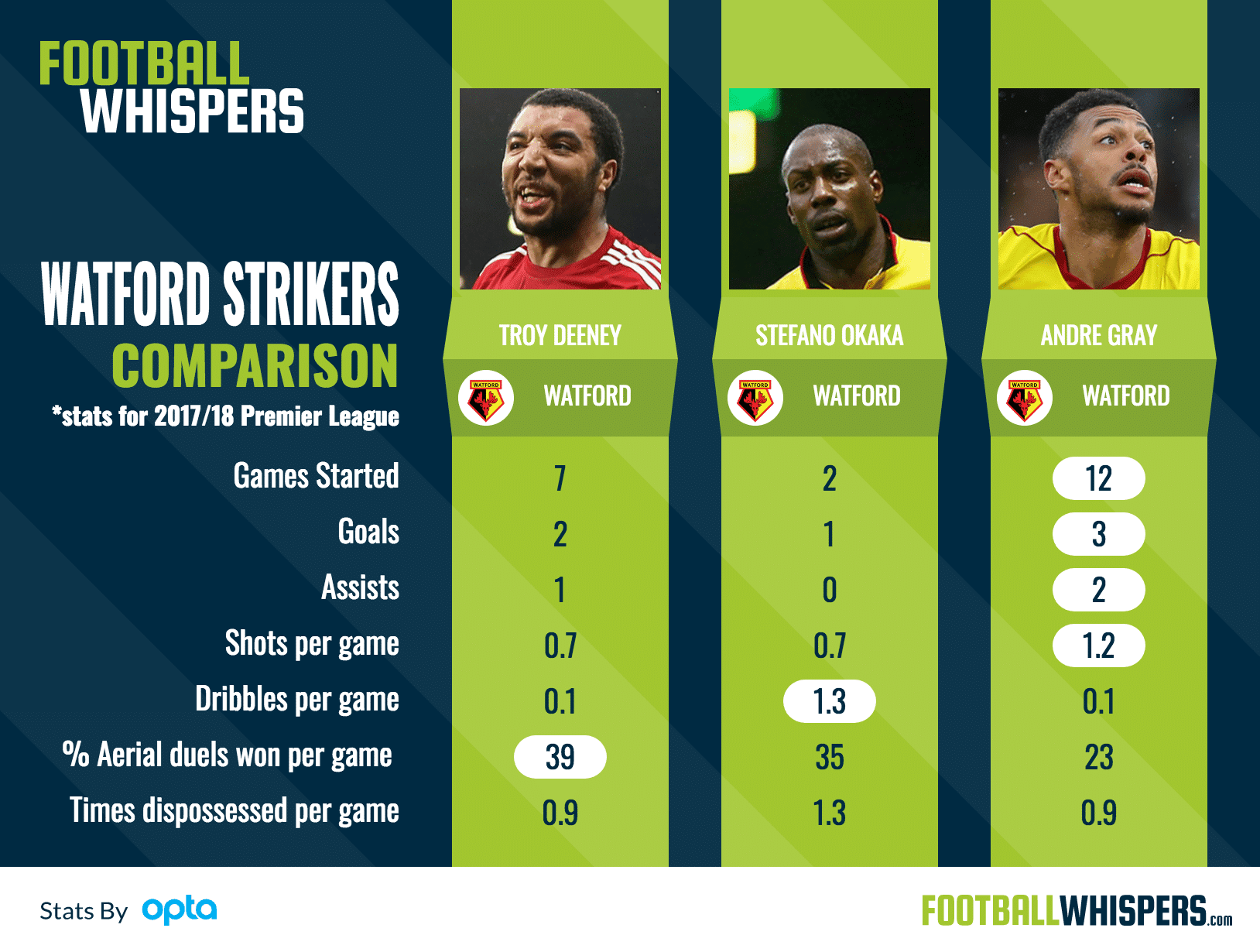 On the basis of their statistics for this season, Deeney comes out second best in all but aerial duels won (39 per cent per game), just ahead of Okaka, and the number of times he loses possession on average (0.9) per game.

Gray, conversely, has scored more goals – all from open play – and supplied more assists while attempting more shots. He wins a lower percentage of aerial duels per game (23 per cent) but it is not his style to win flick ons and battle with defenders in the air.

In fact, Watford don't play to Gray's style at all, which goes part of the way to explaining his goal tally this season.

The former Burnley striker thrives on using his pace to get in behind defences and turning defenders. But he averages just 0.1 dribbles per game because he is never in the positions to carry the ball.

It is something Hornets midfielder Tom Cleverley acknowledged after Gray's goal in the recent loss at Manchester City.

“He brings us another dimension. His runs in behind are something that go quite unnoticed and I think he's really clever where he makes his runs,” he told the club website.

Okaka's average of 1.3 dribbles per game is an outlier compared to his teammates, but he posts such a high number compared to Deeney and Gray because he drops deeper to get on the ball and link the play – something they do not do so often.

Interestingly, none of the trio make many passes per game. Deeney leads the way with 12.5 while Okaka (11.5) and Gray (10.3) are just behind. Those figures are comfortably lower than the teams around Watford.

Silva's side average 423.4 passes per game. Swansea average the same yet their two of their three strikers –Jordan Ayew (21.7) and Wilfried Bony (17.5) – comfortably average more passes per 90 minutes.

Only Tammy Abraham, on loan from Chelsea and still learning his craft, (11.3) compares to Watford's frontmen in that respect. 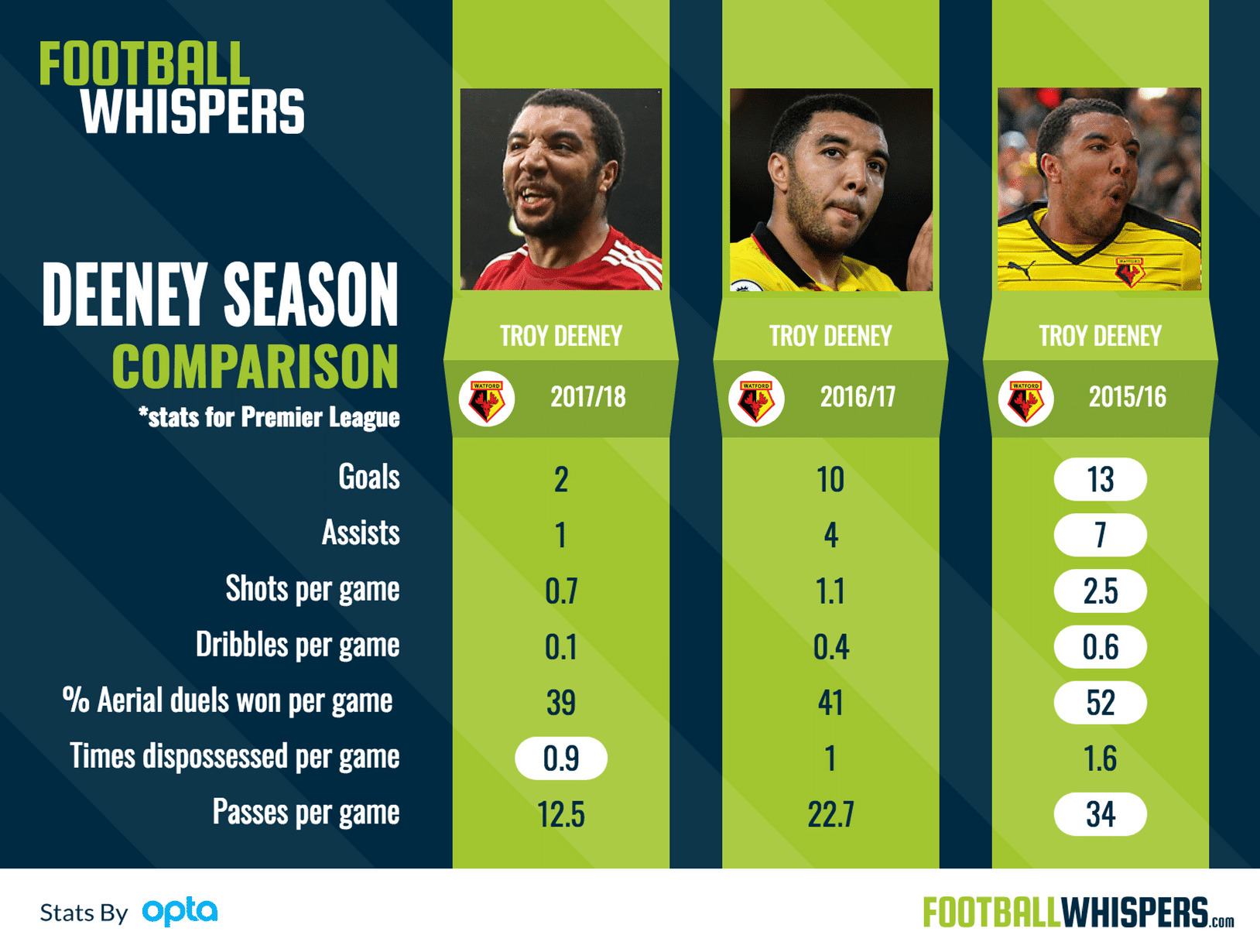 As the graphic above illustrates, each of measures we've used to evaluate Deeney's impact over the last three seasons has taken a hit.,

Most notably, the number of passes he averages per game is almost a third of what it was in 2015/16 when the Hornets were first promoted (34.1). He is also getting off fewer shots (2.5) and winning a lower percentage of aerial duels (52).

His best performance this season – by some distance – came from the bench in the come-from-behind win against Arsenal at Vicarage Road. Ironically it was Deeney's now infamous comments about the Gunners' lack of ‘cojones' which have seen him become public enemy No.1 for followers of the North Londoners.

The question is whether Deeney is declining or whether Watford are failing to give their forwards the supply they need to be at their most effective. In the case of Gray there is a slight drop-off in his numbers from last season at Burnley versus this campaign.

With the Clarets, Gray made an average of 11.6 passes per game, though he has never been the kind of striker to come short and receive the ball. Tellingly, however, he averaged 0.7 dribbles per game. He was also taking 1.5 shots, slightly up on this term.

Therefore, the contrast between last season and this suggests he too is struggling to find his best form in this team.

Burnley averaged 85 long balls per game last season – the most in the Premier League – which played into Gray's hands. But Watford, under Silva, are hitting just 64 a game at present – a drop of around 25 per cent.

Another factor which cannot have helped is the Hornets' change of system. In the last two campaigns Watford have utilised two-striker systems more often than not with Deeney partnered, usually by Odion Ighalo, up front.

The best top-flight season of Deeney's career was his first, under Quique Sánchez Flores. Set up in a 4-4-2 at times, the Hornets' No.9 linked play and sacrificed himself for the prolific Ighalo while still finding the net regularly.

Meanwhile, at Burnley, Gray spent most of last season alongside Sam Vokes. In that pairing the former Luton Town man was the one to play on the shoulder with Vokes occupying defenders, making space and winning flicks. Gray benefitted from the Welsh international's service.

Perhaps, then, the answer is that neither player is the problem, rather the system is to blame. If that is the case then Silva must try something different in order to get the best out of his forwards.

Watford have played with two up front just once this season, in the Carabao Cup defeat to Bristol City when Gray came off the bench to partner Deeney for the final 20 minutes.

Ironically the Hornets host the Robins again this weekend in the FA Cup. With Deeney back from his four-game ban and the chance to experiment without precious league points on the line, it might be time for Silva to switch to a front two.