There comes a point every season when the role of Troy Deeney in the Watford team is up for debate. This year it's arrived earlier than ever.

On Thursday, the Hornets confirmed their captain and talisman had undergone a ‘minor knee operation that will sideline him for several weeks'.

It is unwelcome news for head coach Javi Gracia who, for the first time during his Vicarage Road tenure, has come under scrutiny following two Premier League defeats without scoring.

Another loss, against West Ham United on Saturday, would mean Watford are pointless and goalless after their first three league fixtures for the first time since 2003/04. 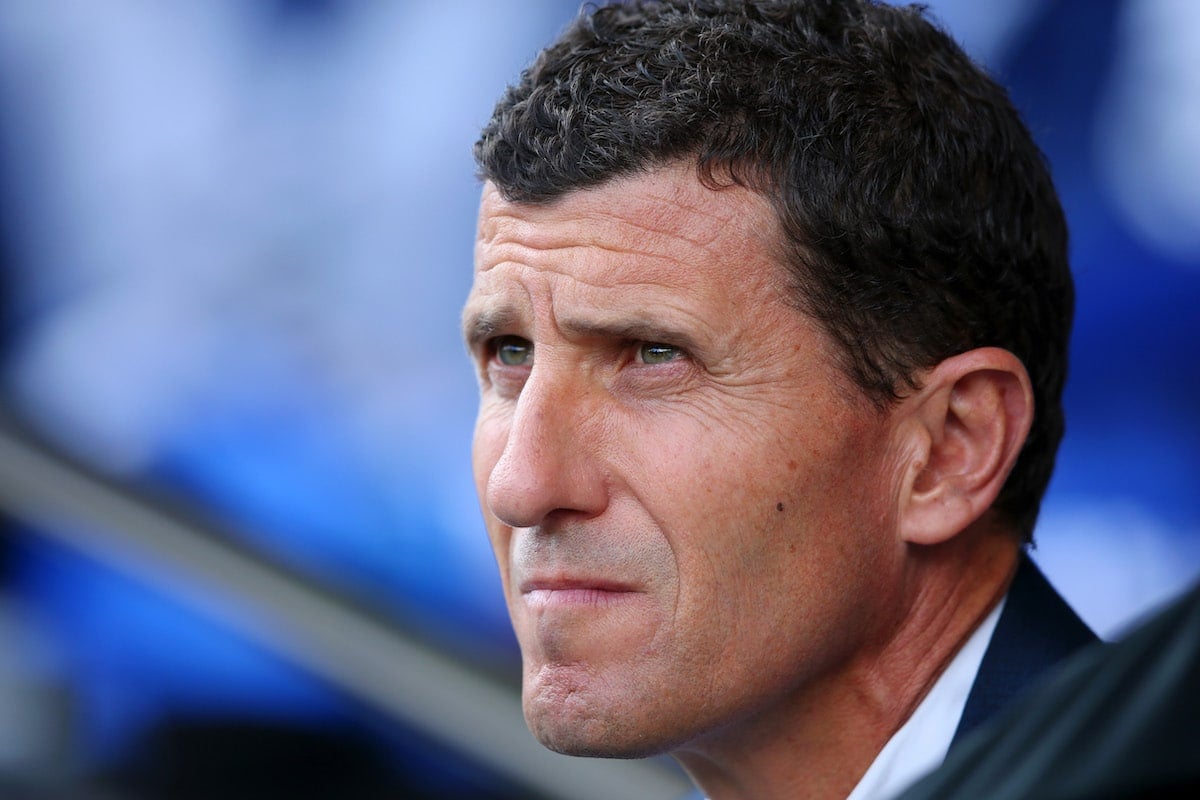 On top of that, maverick wideman Roberto Pereyra and midfield conductor Abdoulaye Doucouré could miss out, potentially forcing Gracia into three changes.

However, there might be some good news regarding summer signings Danny Welbeck and Ismaïla Sarr.

Having played as recently as July 19 thanks to his African Cup of Nations involvement, Sarr has only returned to full training this week following a fortnight-long holiday. Former Arsenal striker Welbeck is ahead of the Senegalese international and made his Hornets debut in last Saturday's 1-0 defeat Everton. Neither is fit to play 90 minutes.

So what does Gracia do? Watford's head coach has plenty of credit in the bank after steering the Hornets to their second FA Cup final and best Premier League finish (11th) last season. But there is no getting away from a run of eight defeats in 11 league fixtures.

Without the distraction of the cup final, questions have been asked. Chief among them, is Gracia inflexible? The Spaniard was lauded for his tactical nous when he succeeded Marco Silva in January 2018 – especially his ability to set teams up to get results against the big boys, his party trick in Spain.

Yet since settling on the narrow 4-2-2-2 system which has become his calling card, there's been little variation – save for a 4-5-1/4-1-4-1 when facing Manchester City.

So could Deeney's injury be a blessing in disguise and force the 49-year-old into shaking things up? 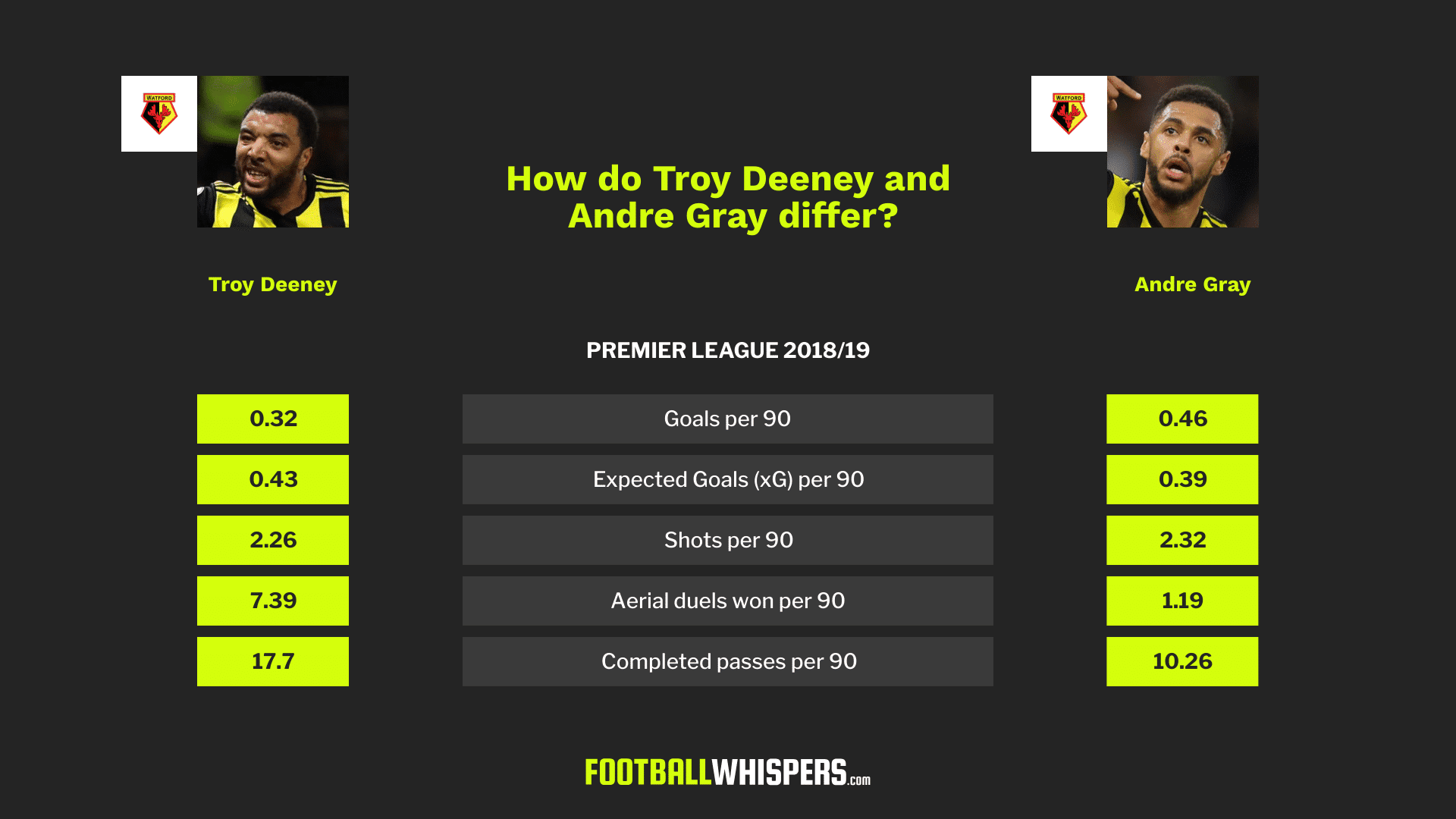 The most obvious deputy for Deeney is Andre Gray. Yet the former club-record signing has never had the same impact when starting games as coming off the bench – even though five of his seven league goals last term came when starting. Gray carved out something of a niche for himself in 2018/19, regularly coming off the bench and using his pace to get in behind and unsettle tiring defences.

Being partnered with Gerard Deulofeu has been no more profitable. The Catalan needs the archetypal ‘big man' next to him in Deeney. Gray and Deulofeu started three games together last season following Deeney's sending-off against Arsenal and were ineffective as the Hornets won only once – against already relegated Huddersfield Town.

That leaves Gracia between a rock and a hard place. Stefano Okaka, despite being involved in pre-season, has not been so much as a substitute in either of Watford's Premier League fixtures this season. Had he been more involved, starting the Italian as the central forward in a 4-3-3 shape could have been an alternative.

Isaac Success is marginally less peripheral. After burning brightly but very briefly last autumn the Nigerian lost his No.10 shirt to new-boy Welbeck this summer.

He came on for 15 minutes in the aberration against Brighton but was not in the 18 at Goodison. Adalberto Peñaranda's status and whereabouts are anyone's guess.

The Venezuelan prodigy has not been since the end of last season. 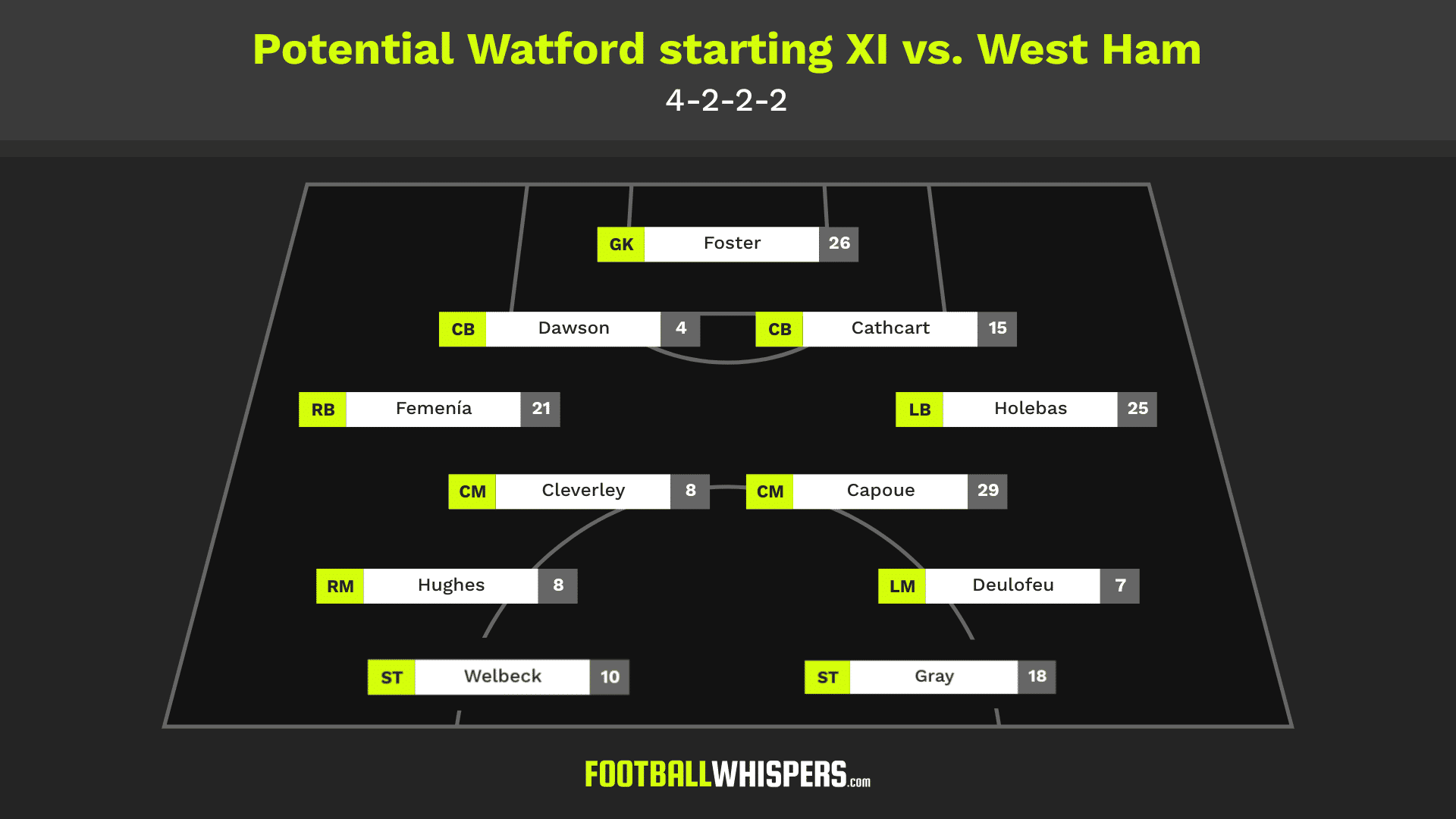 All of which leads us back to Gracia's favoured 4-2-2-2 system. Facing a real selection dilemma, the least-worst option might be to start Welbeck alongside Deulofeu and try to get an hour from the England international.

He came off the bench for the final 23 minutes of last weekend's defeat at Everton. While it's unlikely Welbeck will manage more than an hour, he would perform the target man role alongside Gray while Deulofeu would fill in for Pereyra on the left-hand side.

The former Barcelona prodigy is better utilised as a striker given his lack of work-rate off the ball and, behind him, José Holebas can expect to have his work cut out – as was the case against Brighton.

Gracia is an unfailing gentleman and diplomat; not the sort to complain or rue his luck. If a Deeney-less Watford fail to turn things around on Saturday, even the Spaniard's resolve might be tested.