Being a football manager is similar to being Prime Minister. It's one of the few jobs which is public enough everyone takes an interest and feels they could do better. Watford coach Javi Gracia will have felt that way at numerous points throughout his brief Vicarage Road tenure, but never more than last Saturday.

Matchday 37, the penultimate weekend of the Premier League season, and the Spaniard finally paired strikers Troy Deeney and Andre Gray together from the start. He is not the only head coach who has been reluctant to start with the two Midlanders; Marco Silva failed to do so before being sacked in January.

It has been a season of frustration for both. Club captain Deeney has picked up two needless suspensions – one for trying to crush Joe Allen‘s head with his bare hands, the other for flying into a mindless challenge on Collin Quaner – and did not score his first league goal from open play until the 1-0 win over Everton on February 24.

Gray, meanwhile, has been left kicking his heels on the bench for much of the season with Silva and Gracia steadfastly sticking to systems employing a lone frontman. Signed for a club-record fee of £18.5million, the former Burnley forward would, rightly, have expected more opportunities.

The 26-year-old has only scored five times, including in that 2-1 win over Newcastle United last weekend, only to find himself back among the replacements the following weekend. An odd message to send out at best.

Yet Hornets supporters have long felt – virtually from the moment Gray arrived in fact – the duo should be partnered together up front. Deeney, whose games is so famously about his physical attributes, work-rate and ‘cojones', appears, on paper at least, to be the perfect foil for the more nimble Gray. Classic big man-little man, if you will.

And Football Whispers' Player Persona tool backs that up. Taking each player's data from the 2017/18 Premier League season overlaid against one another's we can see where they overlap in terms of style and where they contrast. 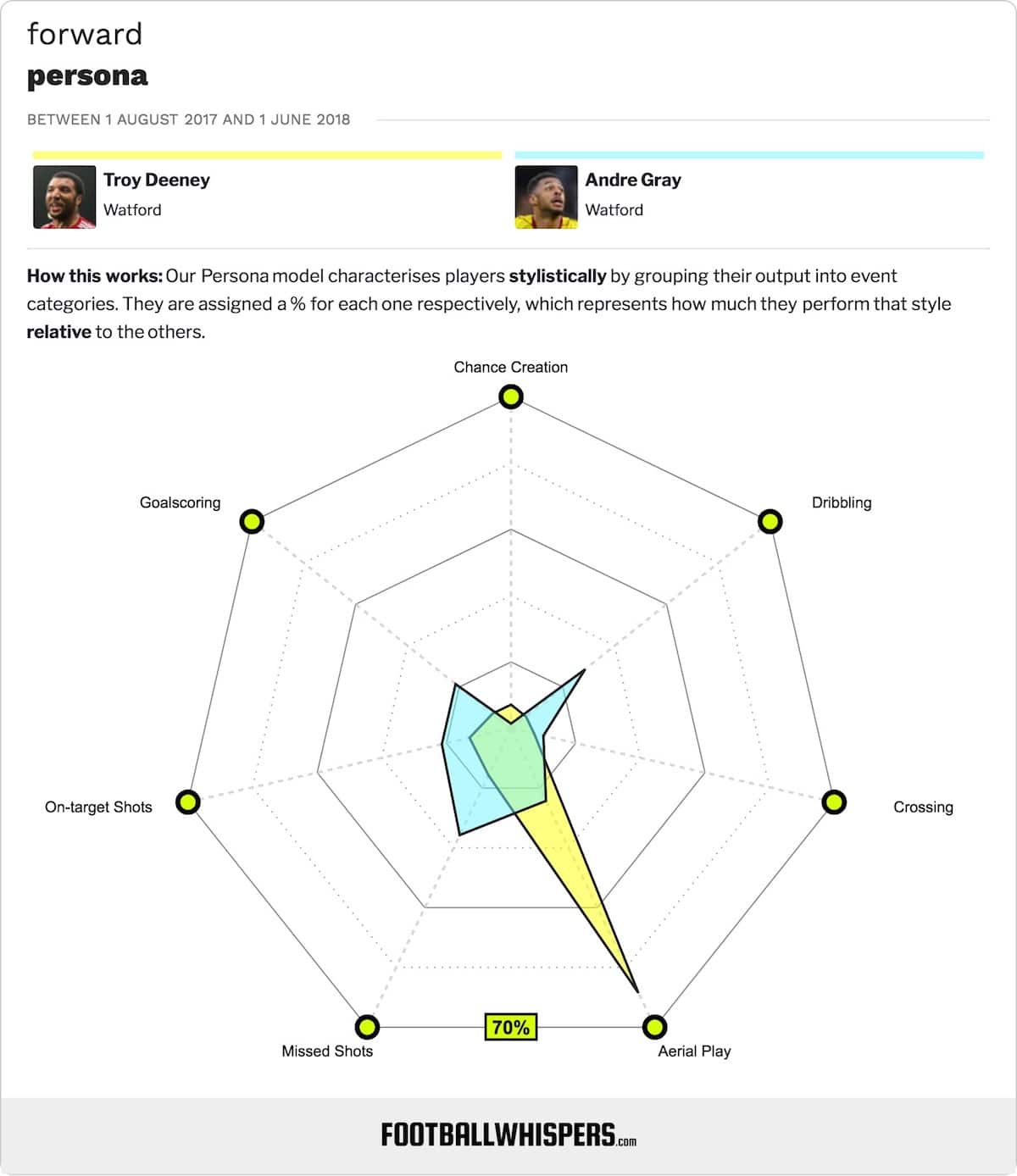 The graphic shows very clearly the strength of Deeney's game: aerial duels. The former Walsall striker wins 6.74 per 90 which is enough to put him seventh among strikers to have played more than 25 per cent of Premier League minutes.

In fact, there is a clear theme to the metrics in which the two forwards excel. The categories in which Deeney comes out on top (aerial duels won and open-play key passes) point to a creator. Whereas Gray's (goals, shots and touches in the opposition box) indicate more of a finisher. 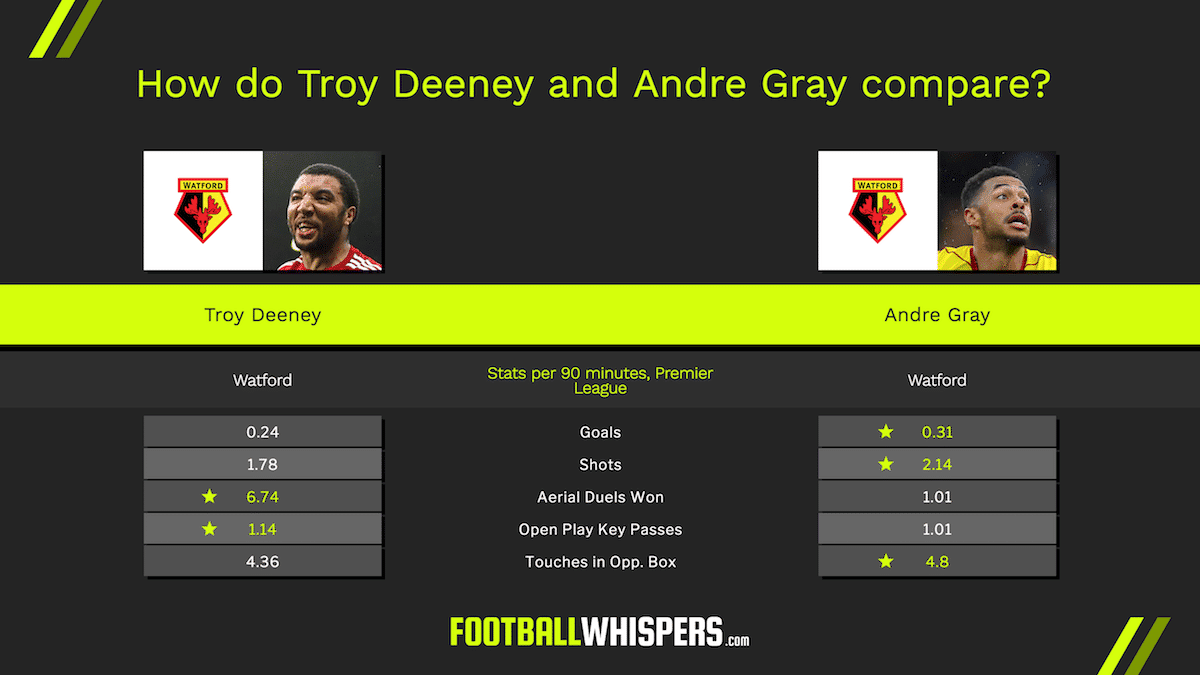 To an extent, each is reliant on the other, yet, more often than not this season, they have been asked to plough a lone furrow when they've got the nod.

In 15 Premier League starts Gray has only started alongside another forward once. That was against Manchester United in a 4-2 home defeat in November when he was supported by Tottenham Hotspur transfer target Richarlison. The Brazilian isn't even strictly a forward.

That finally changed for the visit of Rafa Benítez's Magpies. Out of the blue Gracia pitched Deeney and Gray together for the first time in a Premier League game. The result was impressive – Gray scored and won a penalty which Deeney missed – but equally frustrating given it had taken until this point to experiment with the pair. 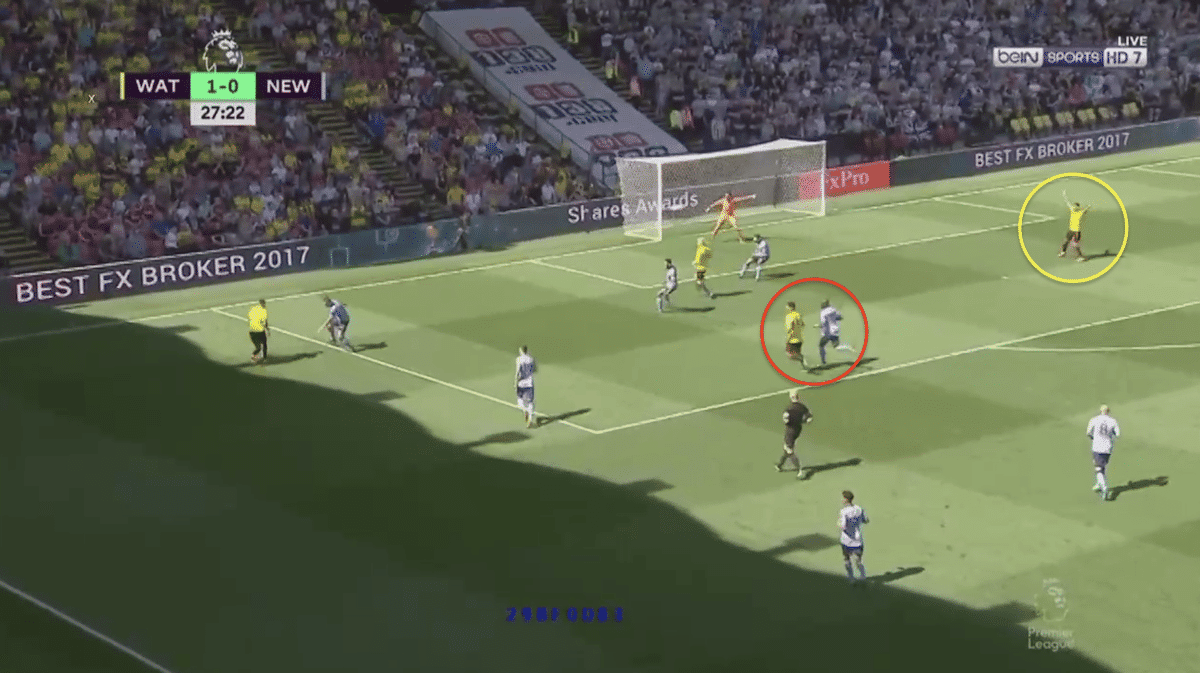 Although Deeney (red circle) was not directly involved in Gray's goal, with Roberto Pereyra providing the cross from the left, his presence alone took up the attention of Newcastle's defence, allowing Gray (circled in yellow) a simple back-post header. 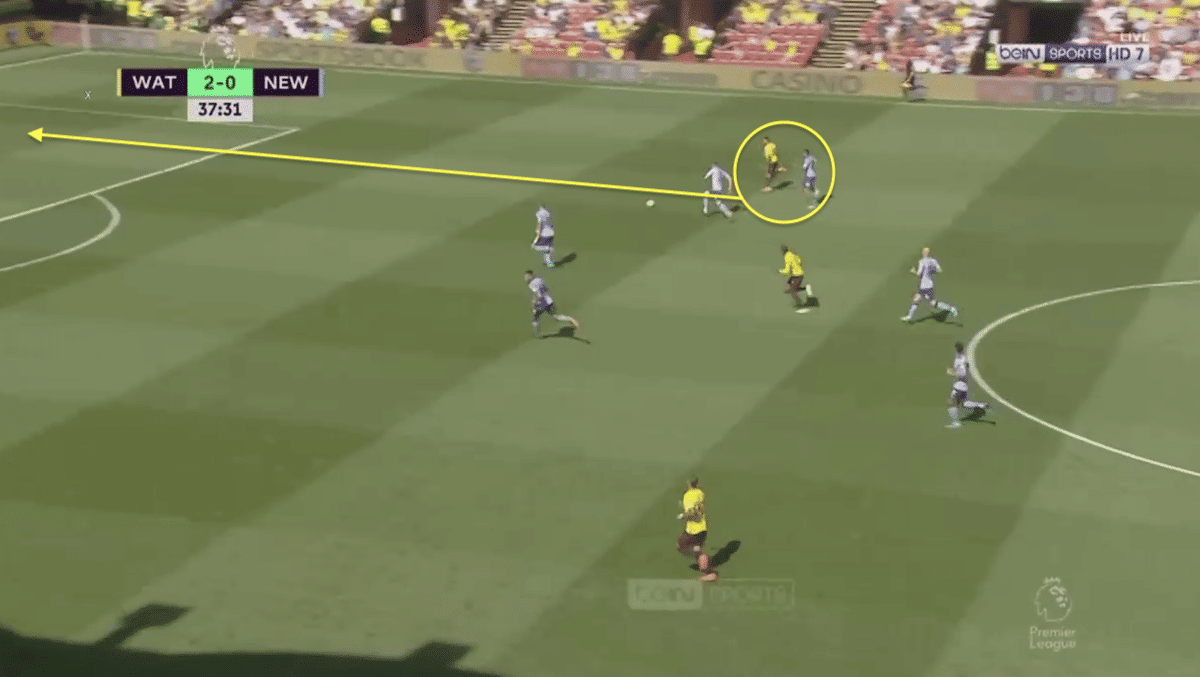 Fewer than ten minutes after bagging the Hornets' second Gray was involved again, running at and stretching Newcastle's backline to win a penalty. Deeney took the kick but saw his effort saved by Magpies keeper Martin Dúbravka.

And when the roles were reversed Gray even displayed an uncharacteristically keen awareness for his surroundings to pick Pereyra out with a cute reverse pass which the Argentine almost poked beyond Dúbravka. 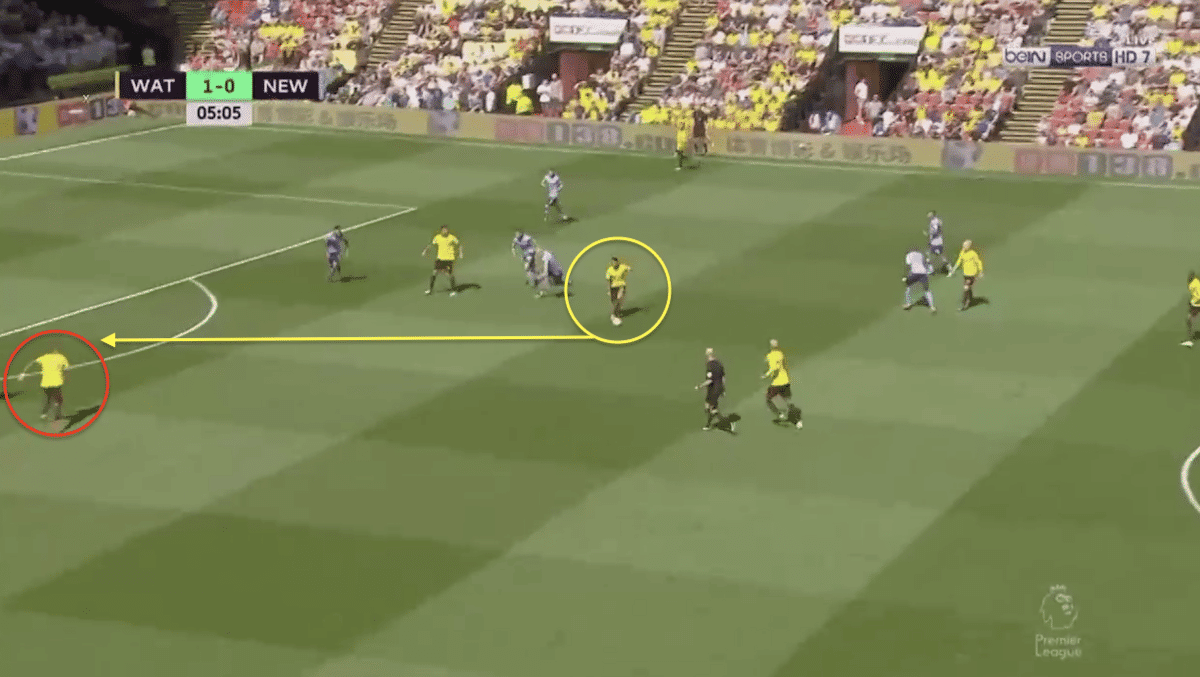 The signs were encouraging. It's too late for Watford, Gray or Deeney this season. It might even be too late for head coach Gracia who has come under pressure in recent weeks following an encouraging start. Next season will be a clean slate and the Hornets cannot repeat their mistakes of this term.