Having waited until October to get a run in the Watford side, Troy Deeney will now sit out the Hornets' next three Premier League fixtures after he was retrospectively banned for what can best be described as trying to burst Joe Allen's head.

The Stoke City midfielder riled the Watford skipper late in Saturday's 1-0 win at Vicarage Road and, in the ensuing meleé, Deeney reacted by grabbing the Welshman by the head and squeezing with all his mite. It was a bizarre incident and indicative of a frustrated player short of minutes and goals.

A booking at the time seemed scant punishment and the burly striker – who only a fortnight earlier had hit the headlines after accusing Arsenal of ‘lacking cojones' – was hit with a ban after accepting a violent conduct charge.

Now Watford head coach Marco Silva must decide between £18.5million summer signing Andre Gray and Stefano Okaka, who has not been in the matchday squad since the 3-3 draw with Liverpool on the opening day, to lead the line for the next three games.

The case for Okaka

It's hard to know exactly what the hulking forward did wrong that day, especially as he scored the Hornets' opener, but he has been persona non grata since and not even been afforded a spot on the bench since the 2-0 win at Bournemouth in mid-August.

On Thursday the Watford Observer published a story in which it was claimed Okaka had no idea why has been left out of Silva's squad ever since. The Portuguese coach hit back the following day by stating Okaka and everyone at the club knows why.

“I don't normally like talking about individuals, but I will talk about Okaka because many, many people have written a lot of lies about the situation,” he said.

“He started the first match against Liverpool. In the second match, he was on the bench. The third match, was the League Cup, he didn’t stay on the bench; we changed a lot of players.

“Until that moment it was a technical decision only. After that, it was more than that.

“For me it’s clear, for everyone to understand. Okaka knows why he didn’t play. Marvin [Zeegelaar] hasn’t played one minute, neither has Jerome [Sinclair], but there have been some lies written about the situation.”

It would, therefore, be a major surprise if the 28-year-old gets the nod for Sunday's fixture at struggling Everton. At best the former Roma and Fulham striker can expect a substitute role and even then, Silva may make a point by putting Sinclair on the bench ahead of him.

Whatever else has happened at the Hornets' London Colney training HQ, the suspicion is the Italian forward is not mobile enough for Silva's liking. But Okaka offers something different; something which might have been useful in Saturday's loss against the Potters.

Although he looks unkempt and unorthodox, shambling around in a shirt too big for him with his sleeves rolled up in a throwback to yesteryear, Okaka is an intelligent player with a unique skillset. He showed precisely what he could do in the draw with Liverpool, using his physique to unsettle the Reds' defence, bring others into play and generally make a nuisance of himself.

Such is his size and ability to use his body, Okaka takes the attention of at least one defender – often two. That creates space for those around him and against a side like Stoke who defend deep and leave little space in behind, he would have been perfect to unsettle their backline.

These three Deeney-free games have given Silva a second chance to soften his stance on Okaka without conceding too much ground. Though one suspects now he has gone public over the whole affair, that is less likely than before.

The case for Gray

Everton present a different prospect, though, and one which Gray will be more suited to. With Michael Keane missing out it should be the less-than-mobile pairing of Phil Jagielka and Ashley Williams at centre-half. The pair have no little experience but have been shown up this season and lack the pace Gray trades on.

The former Burnley and Brentford hitman has endured a slow start to life at Watford since his club-record move from Turf Moor in the summer thanks, in no small part, to the fact he has completed 90 minutes just once in the Premier League having been hooked in five of his six starts.

But he is now facing the prospect of three virtually guaranteed starts in succession with Deeney missing games against Everton, West Ham and Newcastle United in the next month.

That run of games could be make-or-break for the 26-year-old who has not scored since bagging his first goal in Watford colours in the win at Swansea City in September.

Pace in behind is Gray's biggest asset and one Watford must make use of at Goodison Park on Saturday. He can stretch defences and against the ageing Williams-Jagielka axis he can make hay and show he can be Silva's first choice to lead the line. 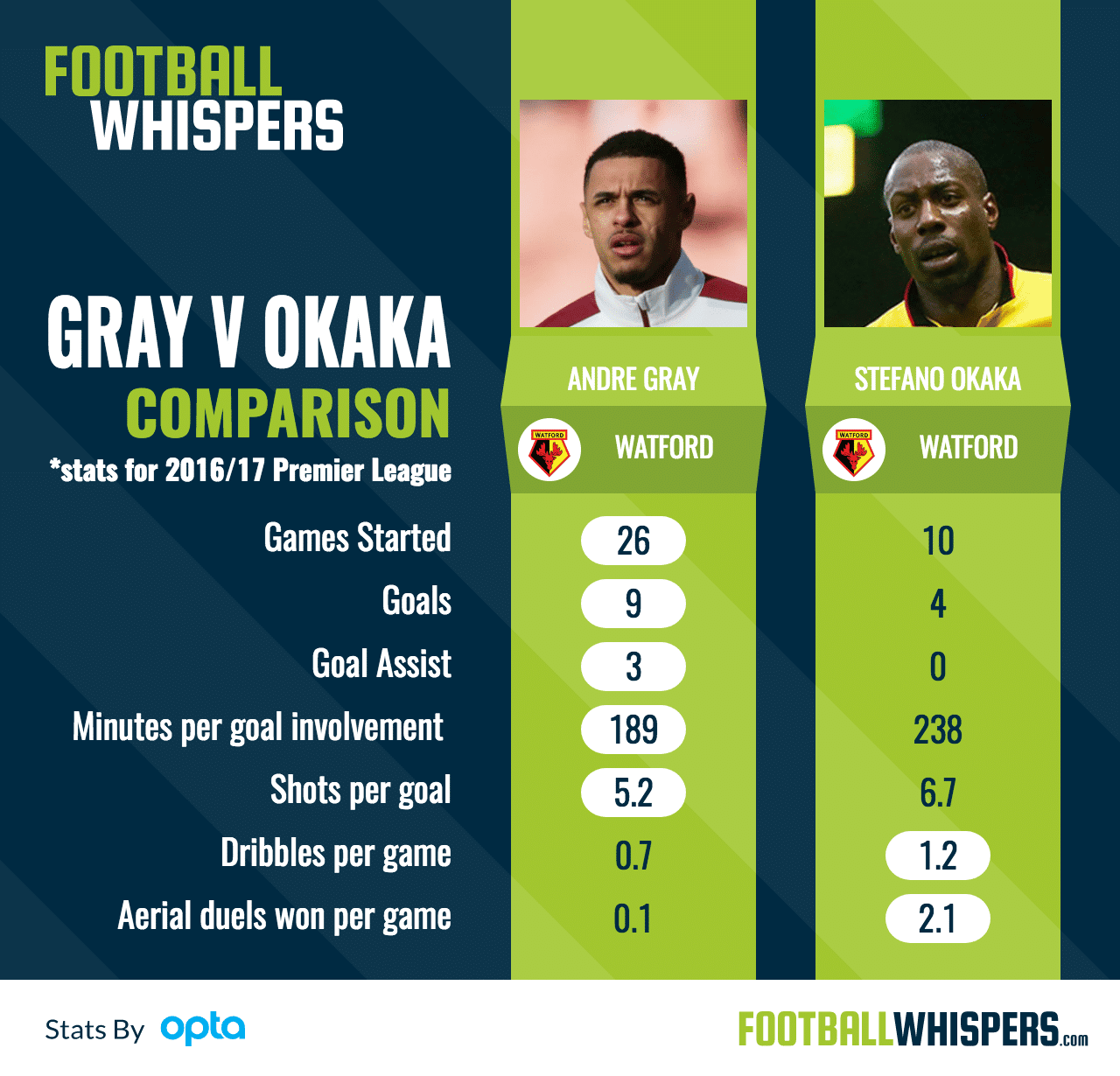 Horses for courses for Watford

But that does not mean Okaka should be discounted entirely either. Popular with Hornets supporters he has become an outcast under Silva but this is a chance for him, too, to prove he has a role to play – at least until January.

The stats above, taken from last season for a greater sample size, outline the differences between the two players. While Gray started regularly for Burnley, injury and fitness issues restricted Okaka's minutes on the field but he still chipped in with four goals meaning he was not too far behind Gray in terms of his minutes-per-goal and assist ratio. He completed comfortably more dribbles and won more aerial duels too.

The next three matches give Silva and enforced opportunity to look at his side without Deeney, a constant for every Watford coach in recent years thanks to his goals and sheer force of personality.

Between Deeney, Gray and Okaka, Silva has three very different strikers to call upon. Each offer different strengths and weaknesses but no two are the same and that is the mark of a well-constructed squad. Unlike, for example, Sunday's opponents Everton who have a plethora of No.10s but lack a pacy forward to get in behind.