Ousmane Dembélé arrived at Barcelona last summer with high expectations and an even higher price tag, setting the recently crowned champions of Spain back an initial €105million, with the potential for another €40million to be added if conditional bonuses are triggered.

The Catalan giants, stinging from the loss of Neymar to Paris Saint-Germain, earmarked the French winger, then plying his trade with Borussia Dortmund in the Bundesliga, as the man to both fill the void suddenly created in their attack, and act as a safe-facing statement signing.

But Dembélé hasn't had it all his own way with Barça thus far. A serious hamstring injury, which required four months of recuperation, sustained in just his second appearance for the Blaugrana, robbed him of what would have been a useful settling-in period, while the differing tactical demands of his new role compared to that he thrived in last term at Signal Iduna Park have stalled his progress.

As such, rather than being the kind of impactful acquisition Barcelona hoped the youngster would be, Dembélé has only showed the full extent of his talent and potential in fits and starts. 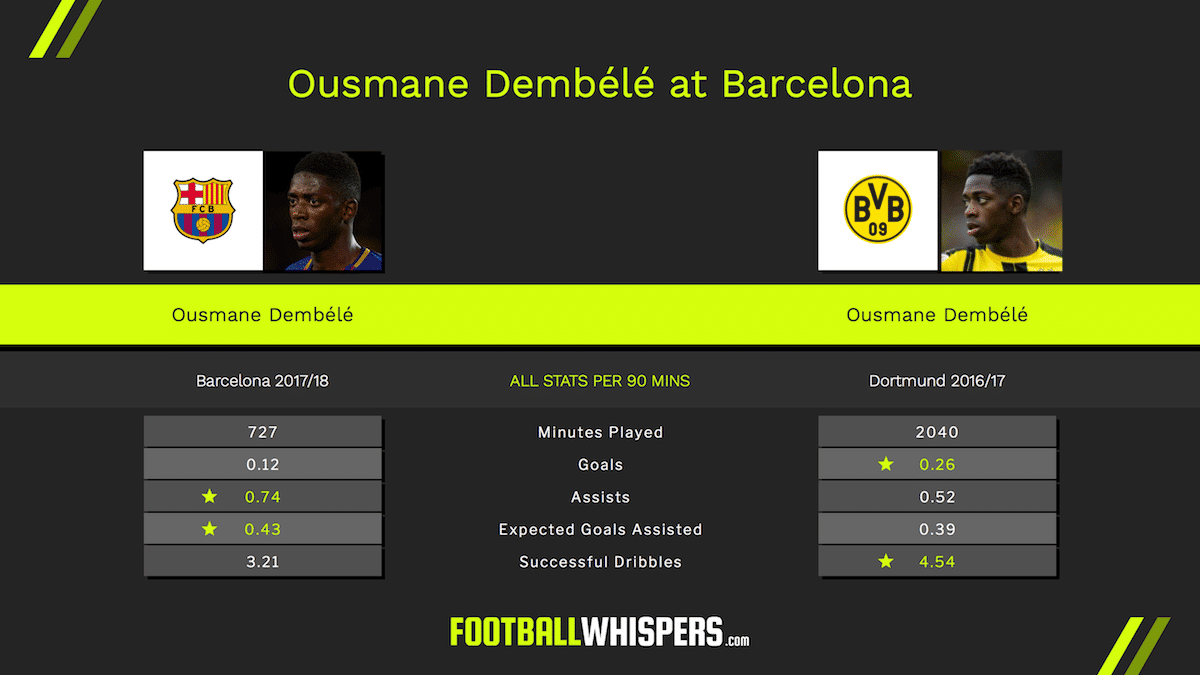 For every thrilling burst through midfield beyond multiple opponents, there have been several instances of him hanging on to the ball too long; for every cutting, chance-creating pass, several have gone awry; and for each time he seemed completely in tune with Lionel Messi and Luis Suárez, there are multiple cases of a lack off concentration off the ball and positional indiscipline.

Although there was less fluctuation between magic and mishaps, such traits were still visible in his performances with Dortmund. Plucked from Rennes as a teenager in the summer of 2016, Dembélé joined BVB as a supremely gifted yet raw prodigy; the Bundesliga was to be his refinery.

Ideally, and as was likely to be the case given reports of Barça's interest in the Frenchman predating the Neymar deal, Dembélé would have stayed with Dortmund for another year to round off his rough edges, moving to an elite side when better equipped to instantly make his presence felt.

But the loss of their brilliant Brazilian expedited Barça's need for a player of Dembélé's profile. It was always going to be a huge ask for the France international to almost single-handedly – workhorse midfielder Paulinho was Barcelona's only other major summer addition – ensure a smooth transition to life without Neymar at the Camp Nou.

However, despite the caveats – the horribly unfortunate injury, the tactical shuffling necessitated by Andrés Iniesta‘s fading physical powers and the mid-season arrival of Philippe Coutinho – Dembélé can, overall, be pleased with his work in his maiden campaign in Catalonia.

As the above graphic shows, while he may not have been as much of a direct goal threat – owing largely to the fact Barcelona's scoring opportunities are funnelled toward Messi and Suárez – Dembélé is averaging more assists per 90 minutes for Barça than he had at BVB, where he finished his only Bundesliga season with six goals and 12 assists.

He is also proving a more prolific creator, despite featuring in a less free role than he enjoyed in Germany. Within Thomas Tuchel's 4-1-4-1 system at Dortmund last season, Dembélé was afforded a much greater degree of positional and creative freedom than is the case on the right of midfield in the 4-4-2 shape Ernesto Valverde has introduced at Barcelona.

This is evidenced by the uptick in his average expected goals assisted per 90 – a metric which uses historical shot data to gauge the likelihood of every chance conjured resulting in a goal – from an already impressive 0.39 to a frankly ridiculous 0.43.

Dembélé is dribbling less for Barça than he did with Dortmund, which might point to a dip in confidence, or simply a recognition that, alongside the world's greatest player, he is no longer required to carry such a sizeable chunk of the attacking burden for his side.

The 20-year-old doesn't yet appear to have the full confidence of his coach, often benched for the biggest games in favour of ‘safer' tactical options, and he will certainly have to learn to adapt further to his off-the-ball duties, while also improving his too-often-errant decision-making.

But faith in Dembélé is well placed; this is an elite talent who has already demonstrated many of the traits of both skill and personality required to succeed in the cathedral of footballing deities that is the Camp Nou.

More work is needed, and patience will yet be tested; Dembélé's path to the top will meander, such is the mercurial nature of his talent, but he's right on course.