Diego Costa's first La Liga game since re-joining Atlético Madrid in January has turned out to be a neat analogy for his second spell with the club.

After scoring within five minutes of coming off the bench in a Copa del Rey tie three days earlier, Costa started in the league against Getafe, scoring in a comfortable 2-0 win at the Wanda Metropolitano.

However, his goal celebration, charging triumphantly into the home fans, earned him a yellow card; it was his second booking of the game, thus followed swiftly by a flash of red.

But now he is without a league goal since February and desperately ineffective in all departments. 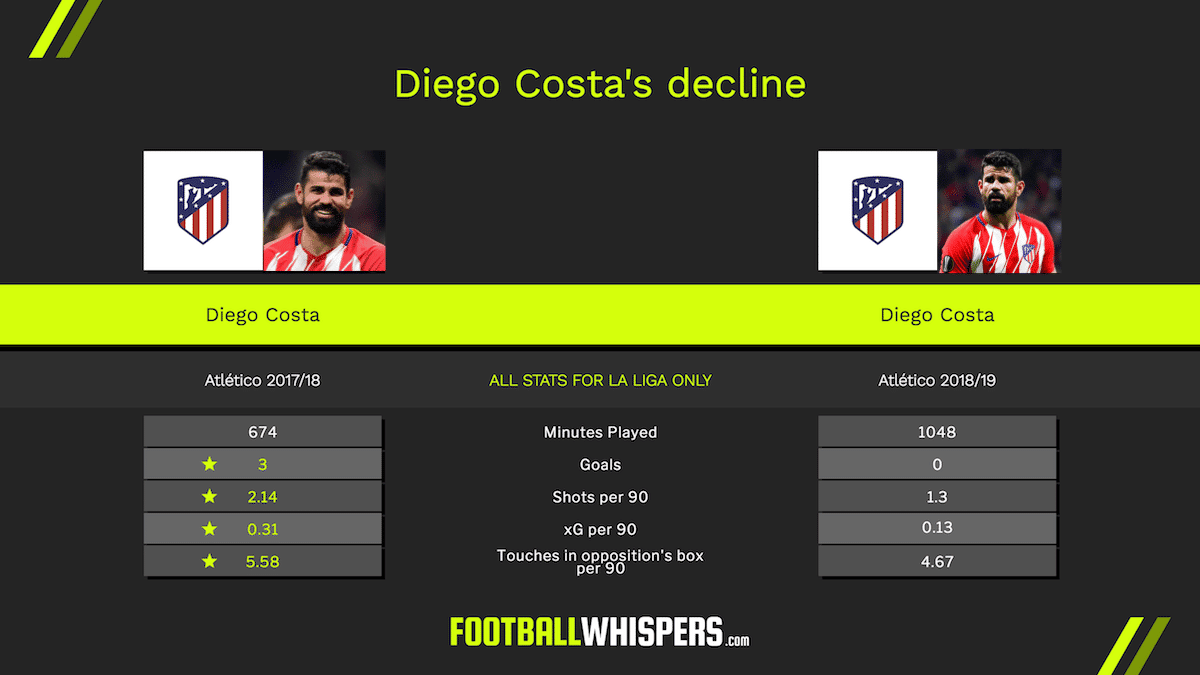 As the above graphic shows, Costa has already played more than half as many La Liga minutes this term as in 2017/18, when Atlético's transfer ban meant he was ruled out until mid-season, but he is yet to score.

More troubling even than his lack of goals, however, is that he is getting on the end of fewer chances than last season.

He is taking fewer shots and his expected goals per 90 average has fallen by almost two thirds, with the drop-off in touches in the opposition penalty area also evidencing his inability to seek chances as proficiently as before.

Costa's ills in front of goal could be forgiven were he still contributing in other areas. But he isn't.

Furthermore, Costa's play without the ball is far less effective. The Brazil-born Spain international is renowned for his workrate along the frontline, pressing opposition defenders and doggedly fighting to win back possession.

What was supposed to be a fairytale return to his former stamping ground after a difficult period at Chelsea has quickly gone sour for Costa.