Of all the English players that Galacticos-era Real Madrid might have signed, and in some cases did, Jonathan Woodgate was nowhere near the top of anyone’s list.

An excellent defender who struggled terribly with injuries, his quietly assured displays didn’t scream star power.And yet, in need of a centre back in the summer of 2004, Real turned to the 24-year-old from Middlesbrough, who’d played in less than half of Newcastle United’s Premier League games the previous season.

His name barely registered with many Spanish pundits. Like so many other shock transfer decisions, the prevailing wisdom was proved right. The move was a mistake for all concerned.

“This is an extreme, exceptional offer which, basically, we had to take,” said Newcastle manager Bobby Robson. “The offer has come in and the player has got wind of it. I don't blame Jonathan in a way because he's going to arguably the biggest club in the world, I think, at this moment.

“If you were in his shoes, what would you do? No-one is pleased that he's gone because we know what we've lost. At his best, he's the best in the country.”

Regardless of Robson’s praise, Woodgate was heading into a particularly ruthless and unstable environment. This was a tumultuous period for Real Madrid, who had recently finished fourth in La Liga, behind Deportivo La Coruna, Barcelona and surprise champions Valencia. After less than a year in charge, Carlos Queiroz had paid for this unconscionable failure with his job.

But the churn of managers didn’t end there. Although José Antonio Camacho was in charge when Woodgate joined for a fee of £13.4million, both he and Mariano García Remón had passed through the club by the time the England international was finally ready to make his debut.

It came in September 2005, more than a year after his arrival at the Bernabeu. In that time Michael Owen had been and gone too, along with another flawed title challenge, but there was no shortage of high-profile names in the Real Madrid ranks.

The prestige of a squad featuring Roberto Carlos, Zinedine Zidane, Raúl, Robinho, Ronaldo and David Beckham was as strong, if not successful, as ever. 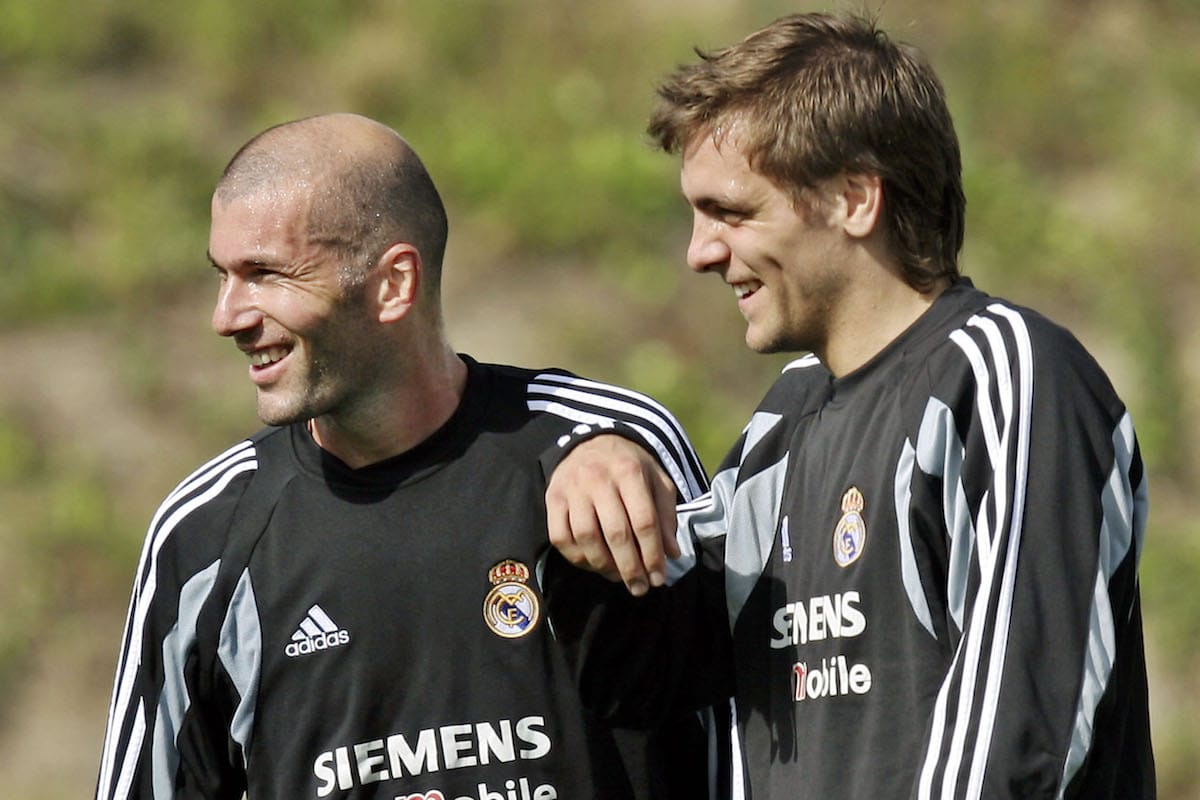 Alongside these leading figures, there were a few other oddities collected from various corners of the world – former Everton dynamo Thomas Gravesen, the skilful yet erratic Antonio Cassano, and Uruguayan workhorses Pablo Garcia and Carlos Diogo. It was a curious mix and the right balance between adventure and endeavour was difficult to establish.

In these uncertain circumstances Woodgate was tasked with making his long-awaited debut. It came on the back of consecutive losses in La Liga, which meant that Real had taken just three points from their first three games. Another crisis was already afoot.

Ivan Helguera and Sergio Ramos, who had started the 1-0 defeat to Espanyol four days previously, made way for the untested centre-back pairing of Woodgate and academy graduate Francisco Pavón. Their hopes of helping to preserve a first clean sheet of the season lasted until the 25th minute against Athletic Bilbao.

Joseba Etxeberria received the ball out on the left flank, cut inside and fired a shot that seemed to be heading comfortably wide of the target until Woodgate threw his head in the way and sent the ball hurtling past Iker Casillas and high into the middle of the net. He lay motionless on the turf for a moment, despairing at his mistake, before leaping back to his feet to be reassured by Pavon.

After all those long and painful hours of rehabilitation work, away from the rest of the squad, in a foreign country, and with supporters questioning why they’d bought a crock, this was the worst start imaginable to Woodgate’s Real Madrid career. Unfortunately, it wasn’t about to get any better.

Early in the second half the hosts drew level through Robinho, and then went in front courtesy of Raul. The whistles of disapproval that sounded at the break from a demanding crowd were being forgotten about and Woodgate could finally settle into proceedings properly. Or so it appeared.

Within a minute of Raul making it 2-1, Woodgate was being sent from the field of play having picked up a second yellow card. A booking for diving in on Bilbao midfielder Carlos Gurpegi during the first half meant that he couldn’t really afford to take any more risks. He did, and paid the price, capping off a miserable first match as a Real player.

Etxeberria nipped in ahead of Woodgate just past the halfway line and pushed the ball beyond him. Woodgate should have simply let his tormentor go but couldn’t resist the urge to put his body across and impede Etxeberria’s progress. Retribution from the referee was swift. 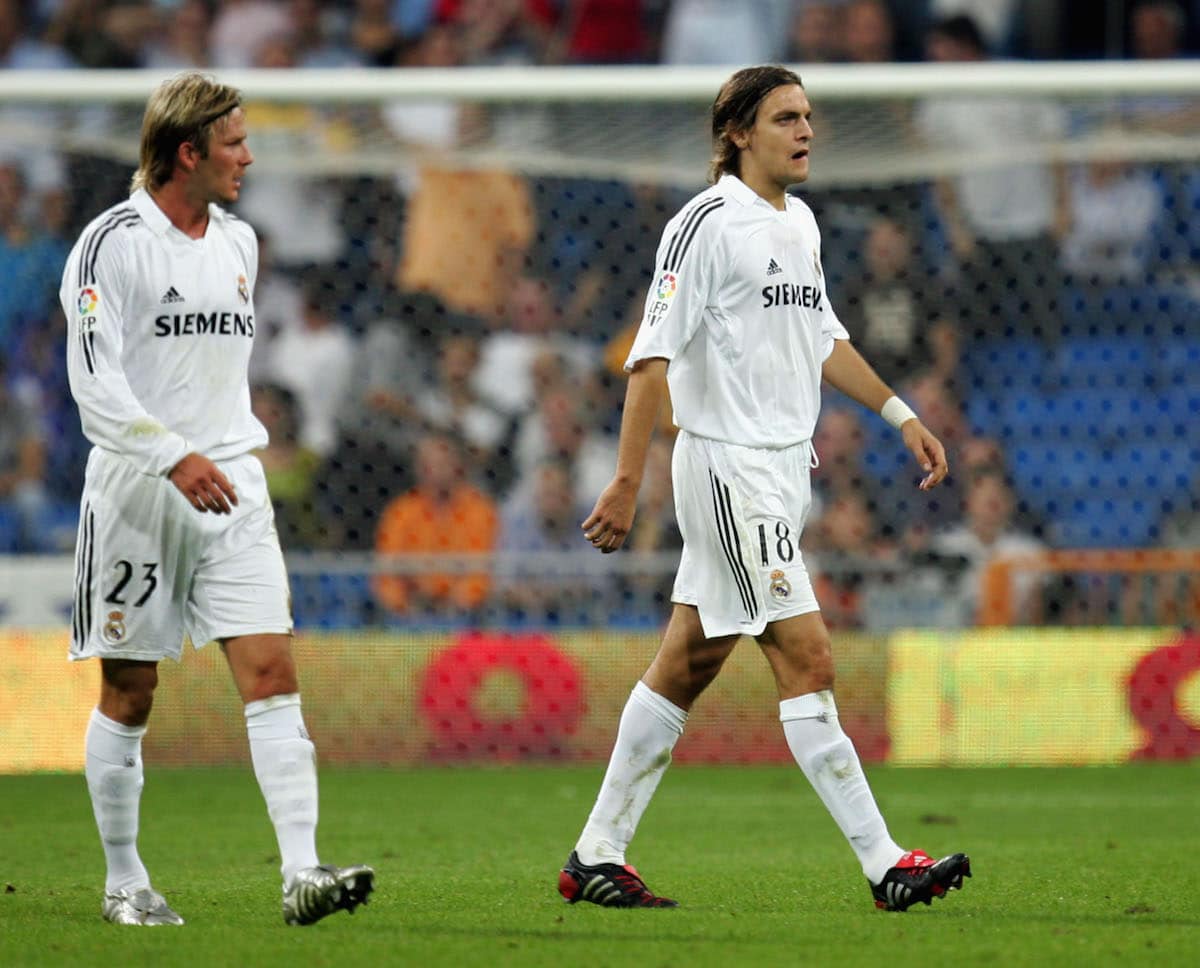 The Real Madrid players surrounded the referee, appealing furiously on their teammate’s behalf, but his fate was sealed. There had been a roar of support when Woodgate’s name was read out ahead of kick-off, recognition of the struggle that he’d faced just to make it this far. The crowd continued to applaud as he meekly made his way from the pitch.

Despite Real going on win the game 3-1, post-match discussion inevitably centred on Woodgate’s torturous introduction to Spanish football. His performances improved after that catastrophic start, but more injuries followed. Midway through February 2006 he was ruled out for the rest of the season and would never again play for the club.

Woodgate made just 14 appearances for Real in total, nine in the league, before being loaned out to his boyhood club Middlesbrough, who he would join permanently a year later. His stint at one of the most famous teams in football, which was by turns frustrating, illuminating and seemingly destined for disaster from the very start, drew to a close having scarcely even begun.

His impact wasn’t forgotten by Spanish supporters, however, who overwhelmingly voted him as the worst signing of the 21st century in an online poll run by Marca in 2007.

It seemed harsh considering all that Woodgate had been through, and the sympathy so many felt for him as a result, but they reached the same damning conclusion anyway.