“Why Always Me?” The famous message Mario Balotelli displayed on his undershirt during Manchester City’s 6-1 derby win over Manchester United back in October 2011.

The Italian striker was quickly becoming more famous for his antics than his football, and his off-field troubles undoubtedly hampered his reputation.

On Tuesday night, taking on Monaco in another derby match, the 27-year-old scored twice as Nice picked up a valuable point at the Stade Louis II.

His 11th and 12th goals of the current Ligue 1 campaign and it took his total for Les Aiglons to 35 since arriving on a free in 2016.

Although more renowned for his time in Manchester or Milan, he has now scored more for the French side than any of his other clubs, not to mention he’s played fewer games for them too. 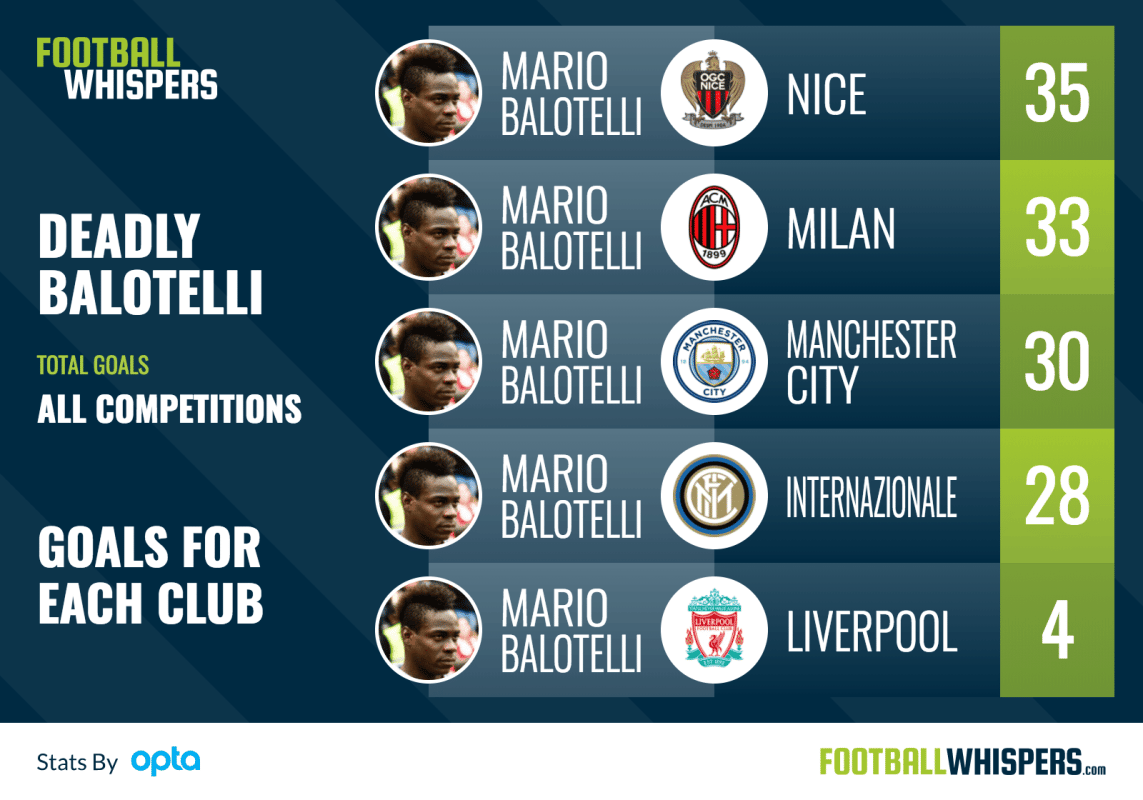 The less said about his time at Anfield the better, with the Italian striker finding the net just four times in 28 games.

What Nice have done very well is use all over Balotelli’s strengths to their advantage. Through his two years, the formation may have changed, from Lucian Favre’s 3-5-2 which kick-started the Swiss coach’s time in charge to the more recent 4-3-3, but what they expect from their No.9 hasn’t altered.

No tracking back, no need to get involved in winning the ball. His job is to get into the penalty area and create a half-yard of space.

Similar to someone like Edinson Cavani at Paris Saint-Germain, what sets Balotelli apart from other forwards is his movement.

Yet, what he adds is a ruthlessness and a physical, slightly nasty edge to his game. The traits which make him one of the best forwards in the division.

His first against Monaco on Tuesday was a perfect example of both. 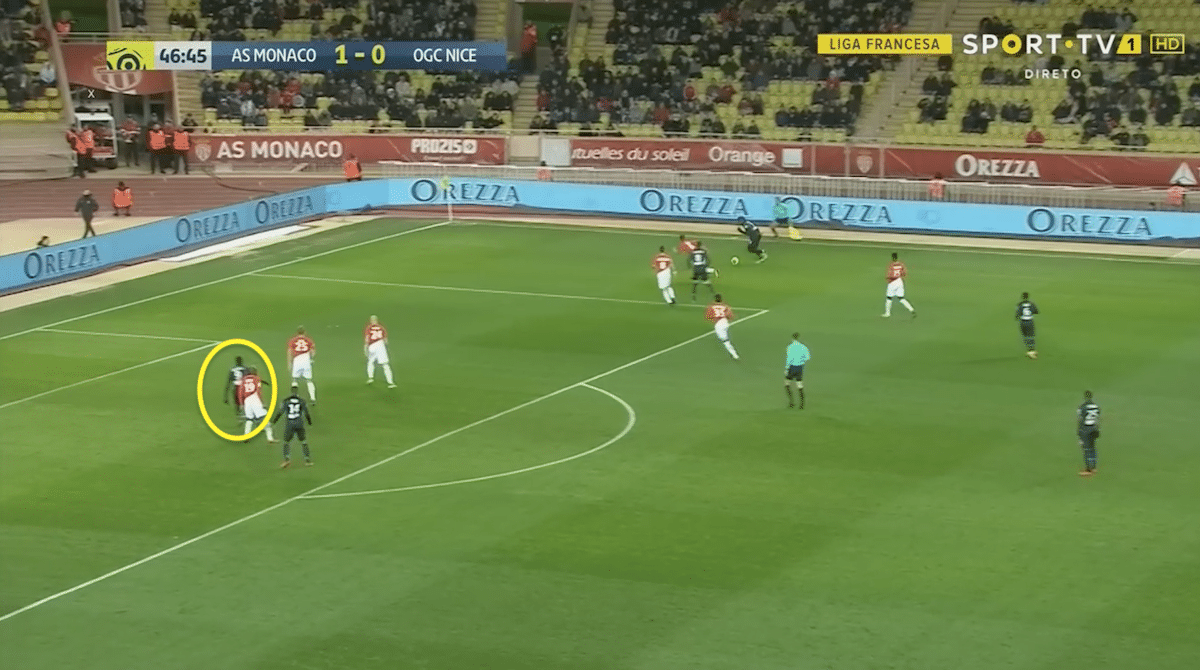 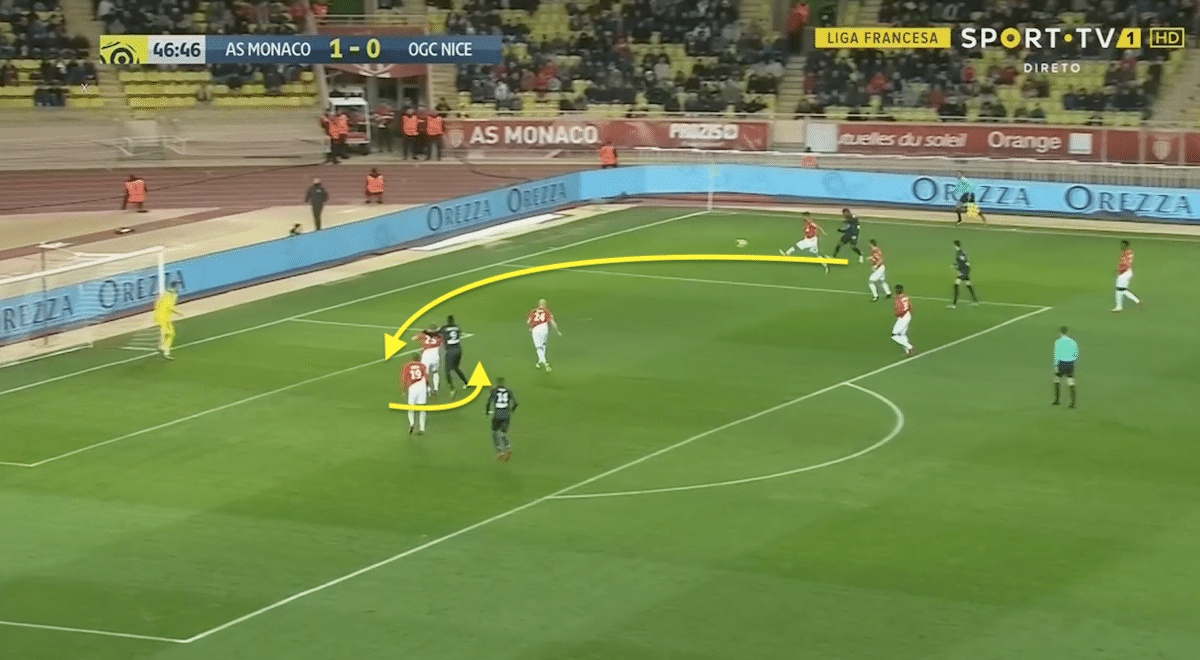 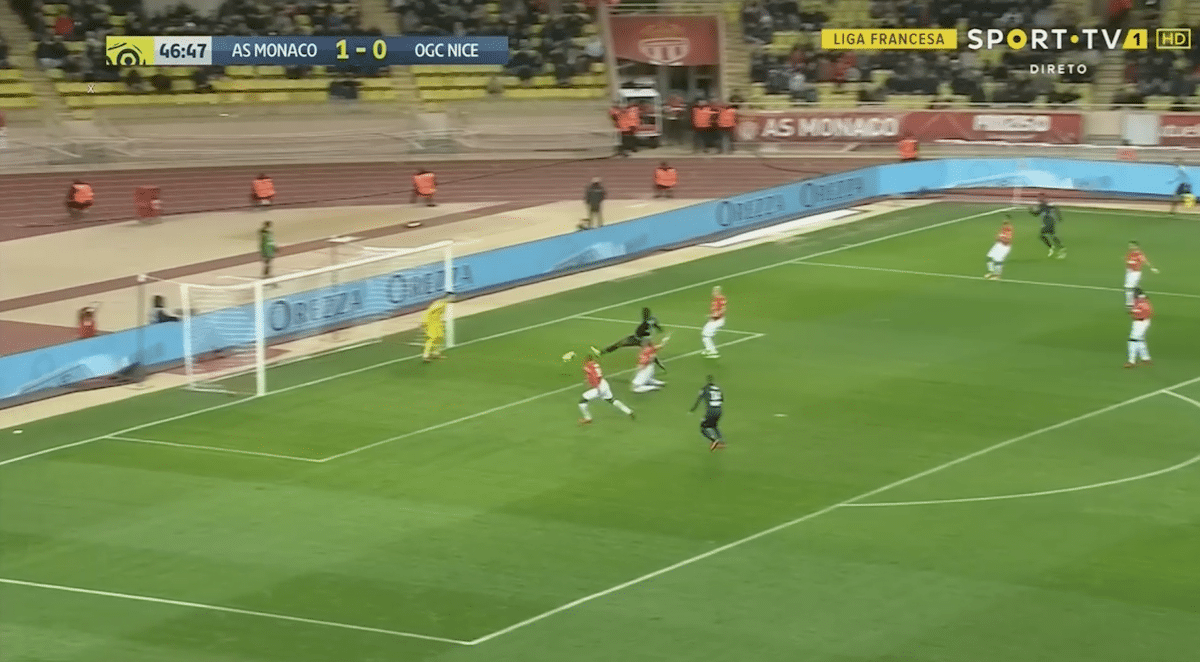 You can see from the graphics above, his starting position with the ball on the right wing is behind Kamil Glik, playing on the centre-back’s blind spot. The Polish defender has been one of the best since his arrival from Serie A, but there is nothing he can do to stop the Italian.

Balotelli knows Allan Saint-Maximin is going to throw in the cross and he uses the space between himself and the defender to gain momentum, running across his man towards the near post.

There’s a bit of a pull, but it’s a physical battle you need to be aware of if you are going to tackle Balotelli head on.

Getting across his man, Glik can’t stop him and the striker gets the touch to guide the ball beyond Danijel Subašić.

For his second, we were witness to something we hadn’t seen all season. The 27-year-old took the ball with his back to goal, turned beautifully, beat his marker and watched his shot deflect beyond the keeper.

For every other goal this term, Balotelli hasn’t needed more than one touch.

It has what has made his time in France such a success. He’s a finisher. A raw, powerful and very intelligent assassin.

At Liverpool it was as low as 35.7 and it dropped further to 27.9 per cent during his second spell at Milan.

In the last five seasons, he hasn’t averaged a higher number of shots on target than he has this term, raising his level from 2.11 to 2.57 at the Allianz Riviera.

Looking at his expected goals (xG) per 90 minutes, you can continue to see the improvement over the past few campaigns.

Using historical data, xG models measure each shot taken in a game to judge its statistical likelihood of being scored, based on the position from which it is taken.

This means we are able to see broadly when a player is finishing chances at an especially efficient rate, or when the opposite is true and they are being more wasteful than expected.

It won’t come as a surprise to Liverpool fans to learn Balotelli failed to measure up to his expected goals total of 5.41, scoring just once.

Yet, his xG per 90 minutes was 0.5, not far from what he is managing at Nice. The most importance difference now is his ability to find the back of the net.

After a terrible start to the season, Nice are up to sixth. It will be extremely difficult to catch Lyon, 11 points ahead in fourth and the only guaranteed Europa League place.

Another European slot usually opens itself up when either Monaco or PSG win a cup, so Balotelli’s goals, now they have lifted the southern club away from danger, will be hoping to guide them to another Europa League adventure.

It would cap off another wonderful campaign for the Italian striker and would perhaps only then hand him an opportunity earn a place back in the Italy set-up.

His last appearance for the Azzurri came in 2014, but he is now playing the best football of his career. On a purely footballing level, it’s a no brainer to give him another opportunity.

Balotelli has a huge decision to make this summer. His contract runs out in July and he’s free to make another move, take his newfound form and try his luck somewhere else.

“I called my agent and asked, ‘What am I doing in January?' He said he didn't know. I want to remain, so we'll see.” Balotelli told Gazzetta dello Sport.

“Admittedly, I would like to get back to having a strong squad behind me. I want to play in the Champions League and win something. The aim is to go back to a big club. To win something important again”

“Why Always Me?” he asked seven years ago, but in his current run of form it really should be, “Why Not Me?”