Ajax captain Matthijs de Ligt is set to be one of the most sought-after players in Europe this summer.

The 19-year-old Netherlands international has starred in the Dutch club's remarkable run to the quarter-finals of the Champions League, ousting champions Real Madrid along the way, and is viewed by many as potentially the best centre-back in the world for the next decade.

As such, Europe's biggest clubs are circling. De Ligt's eventual departure from Ajax, whom he joined as a nine-year-old, will surely make him one of the most-expensive defenders of all time, but that doesn't seem to be deterring suitors.

Here, we take a look at six possible destinations for De Ligt.

Frontrunners for the prodigal teenage defender's signature, Barcelona have already secured the services of one gifted Ajax youngster for next season, having agreed a €75million deal to sign 21-year-old playmaker Frenkie de Jong.

It is being widely reported that Barça will look to reunite De Jong and De Ligt at the Camp Nou next term, viewing the centre-back as the ideal parter for, and eventual heir to, Gerard Piqué at the heart of Ernesto Valverde's backline.

There are rumours Barcelona are working to secure a long-term arrangement with Ajax that will see the Catalan side loan their brightest young talents to the Eredivisie club in exchange for first option on Ajax's best players.

Although no such deal has yet been confirmed, reports suggest as many as three young Barça players could be on their way to the Amsterdam Arena next term. Irrespective of any official arrangement, there is a long history of Ajax stars moving to the Camp Nou, from Johan Cruyff, Johan Neeskens and manager Rinus Michels in the 1970s, to Louis van Gaal, the De Boer twins and Jari Litmanen in the late 1990s.

If Barcelona are to make De Ligt the latest in that line, though, it is believed they may have to convince Ajax to accept a lower bid than might be on offer from elsewhere. Part of Barça's efforts of persuasion could be to include the loan 19-year-old centre-back Jean-Clair Todibo, a January signing from Toulouse, as part of their bid.

Having largely moved away from their big-spending transfer policy in the last few years, it is expected that Real Madrid, largely as a result of their Champions League humiliation at the hands of De Ligt's Ajax, will spare no expense to overhaul their squad this summer. 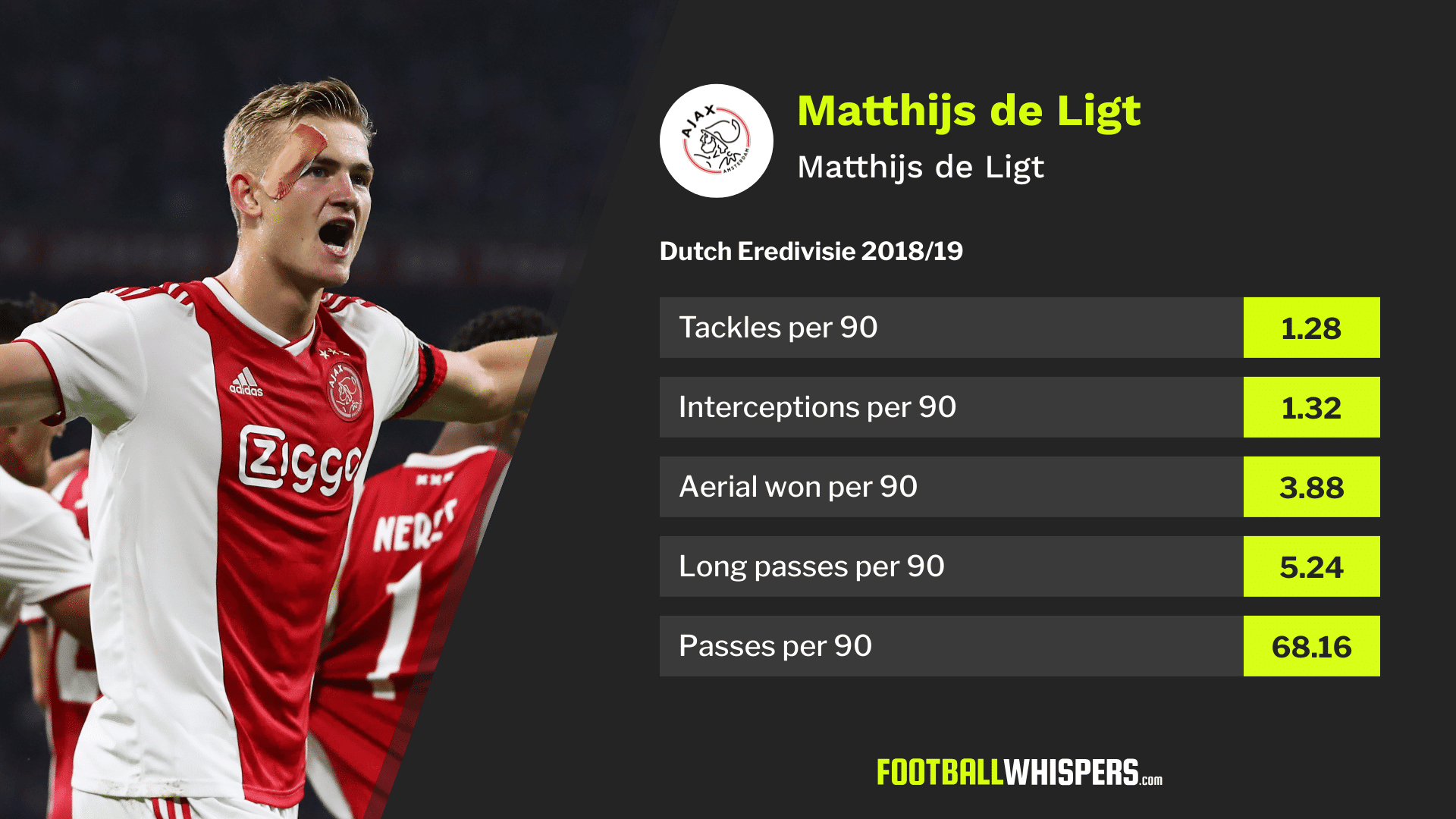 The likes of Neymar, Eden Hazard and Kylian Mbappé are all being touted as potential mega-signings for Los Blancos, but their defence could use some improvement, too, with Sergio Ramos now 32 and Raphaėl Varane said to be considering his future at the club.

It would be no surprise to see the 13-time champions of Europe contest bitter rivals Barcelona's interest in De Ligt.

How much of their significant transfer budget Real are willing to commit to a defender remains to be seen, with a potential world-record move for an attacker being tipped, but the chance to sign such a young player on so steep an upward trajectory as De Ligt will certainly appeal.

Standing 6ft 2ins, powerful in the air and a born leader, there is no better candidate than De Ligt to be the along-term replacement for the ageing and injury-prone Vincent Kompany at Manchester City.

The 19-year-old Ajax skipper is also outstanding with the ball at his feet, able to break opposition lines with incisive forward passes and regularly seen sauntering forward into midfield, dribbling with the confidence of a winger, so he ticks all the technical boxes for Pep Guardiola.

City already have in place a defensive partnership to take them forward into the next decade, though, with record signing Aymeric Laporte and England international John Stones both just 24 years old.

Will City shake up their succession planning to bring in a generational talent?

Serie A champions Juventus have shown in recent seasons they are not afraid to spend big to land their top targets.

In the summer 2016, they made Gonzalo Higuaín the most-expensive player in the history of Italian football when they signed him from Napoli for a club-record €90million.

And last summer, the €100million arrival of Cristiano Ronaldo from Real Madrid acted as a huge statement of intent from the Bianconeri, signalling ambition beyond simply retaining their Serie A title.

De Ligt is now believed to be in Juve's crosshairs. Fifteen years Ronaldo's junior, the Dutchman's arrival at the Allianz Stadium in Turin would perhaps point to a slight change of strategy for Massimiliano Allegri's side, taking a more sustainable approach to squad building and moving away from their plan of signing experienced stars in pursuit if short-term success.

Competition for minutes would be stiffer at Juventus than any other club chasing De Ligt's signature, with veterans Leonardo Bonucci and Georgio Chiellini the domination duo at the back. But the chance to learn at the feet of two of the best centre-halves in the world, before likely soon usurping the 34-year-old Chiellini, could benefit the Dutchman's development.

Perhaps more of an outside bet than any of the clubs listed above, linking De Ligt up at club level with international defensive partner Virgil van Dijk would be a mouthwatering prospect for Liverpool.

Already one of the most formidable centre-back pairs on the international stage, Van Dijk and De Ligt would instantly give the Reds one of the sternest backlines in European club football.

Liverpool already have an able young partner for Van Dijk in Joe Gomez, though. While the England international may not be of the calibre of De Ligt, such fierce rival interest in the Dutchman and his potential price tag might convince Jürgen Klopp to train his efforts on developing the defensive duo already blossoming at Anfield.

Like Real Madrid, Manchester United are expected to spend big this summer in an effort to re-establish themselves as a major force and home and in Europe.

Now that manager Ole Gunnar Solskjær has signed a three-year contract after impressing in a caretaker capacity, the Norwegian boss can get to work on drawing up a shortlist of transfer targets.

Despite José Mourinho having spent more than £60million on the position in his final two summers with the club, United are still lacking a top-class central defender.

Kalidou Koulibaly of Napoli and Internazionale's Milan Škriniar have both been linked with moves to Old Trafford, but if United have the budget for such a costly defensive addition, De Ligt should be top of their list.