Lionel Messi and Cristiano Ronaldo have been the best two players in the world since 2008, which is why the last ten Ballon d’Or awards have been shared by Barcelona and Real Madrid superstars.

But both are now in their 30s and can’t go on forever. And that has led to debate over who may be the next winner not named Messi or Ronaldo of world football’s biggest individual prize.

Talk will naturally surround Neymar, who has finished third in the Ballon d’Or rankings behind Messi and Ronaldo in 2015 and 2017 respectively.

The Brazilian is the world’s most expensive player after his transfer last summer to Paris Saint-Germain from Barcelona. It was widely reported at the time that Neymar made the move to step out of Messi’s shadow and claim future Ballon d'Or awards.

But the PSG forward isn’t the only man tipped to become the world’s best and take on the mantle held by Messi and Ronaldo. Juventus forward Paulo Dybala has been mentioned by former France forward David Trezeguet.

“Dybala can win the Ballon d’Or, as I think he’s showing the right kind of character,” he said last November.

“I often hear of comparisons between Dybala and Messi, but I think that is important for him and can help him to grow.”

Meanwhile, Tottenham Hotspur striker Harry Kane told the BBC he “has work to do” but felt he wasn't far off the standard required to win the Ballon d'Or last year.

However, perhaps the best chance of a Premier League player ending the Messi and Ronaldo reign lies with Kevin De Bruyne.

“No doubt,” said his manager Pep Guardiola when asked about the Belgian’s chances.

“But he knows and everyone knows, to be there you have to win titles – and titles and titles, especially one. But the way he's played it's difficult to find one (better) in Europe.”

That praise is far cry from the perception De Bruyne had among certain pundits when Manchester City paid £50million to him back to England from Wolfsburg after his disappointing spell at Chelsea.

“Manchester City paying so much money for De Bruyne is an absolute joke,” Paul Merson said in the Daily Star at the time

“I thought he was out of his depth at Chelsea. He never once went out on the pitch and looked like he belonged there. I don't think he could handle it – and now he's going to City for about three times what Wolfsburg paid for him. Not for me.

“He'll be on the bench at City for a start, because you can't change a winning team. Who does he get in ahead of? No-one. They're all playing too well.”

Never has a prediction been more wrong. De Bruyne has blossomed and is arguably the best player in England at the moment. 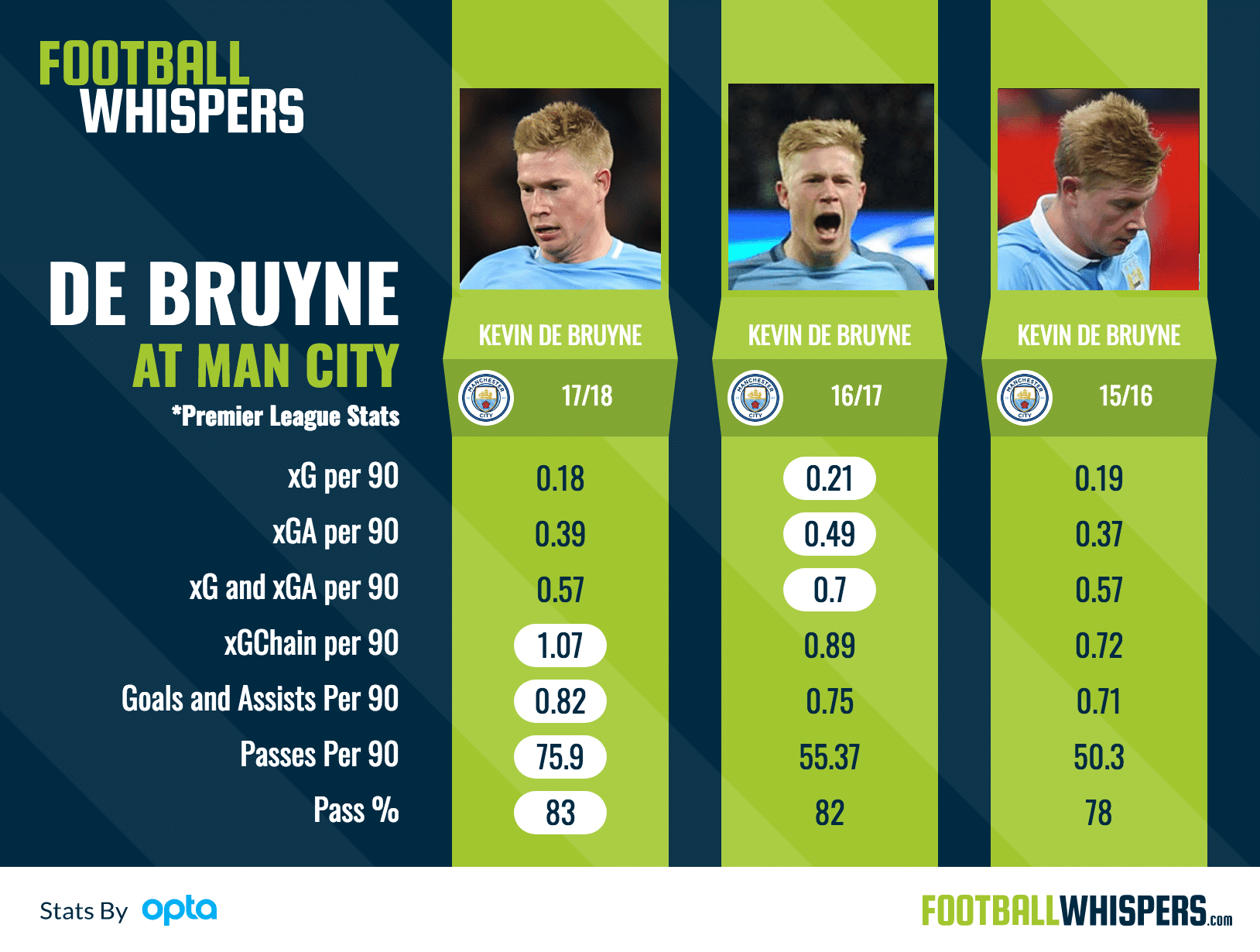 If you look at the stats above, you can see that since the Catalan manager’s arrival in 2016/17, the Belgian’s game has gone to the next level.

While his expected goals (xG) and expected goals assisted (xGA) per 90 may not quite be at the same level as last season, he’s been directly involved in 0.1 more goals per 90 than he was when he first arrived at City.

His xGChain per 90 – that is the expected goals from moves he’s been involved in per match – has a value of over one per game, which is hugely impressive. What that tells you is just how the team is being built around him, and how important he is to City.

De Bruyne has gone from a good player to an exceptional one. It is time to start talking about him as one of the elite in the world.