There doesn’t seem to be a club in European football who couldn’t do with a new centre-back this summer. Most of the Premier League’s top six are looking at strengthening that position ahead of next season, and this could lead to some intense competition for the continent’s up and coming defensive stars.

At the top of many lists will be RB Leipzig defender Dayot Upamecano, and Arsenal and Manchester United especially have been linked with the Bundesliga based centre back.

Long on the radar or most clubs’ recruitment departments, it feels like they have almost had to wait for the 20-year-old to complete his Red Bull schooling, but he may now be about to graduate.

And he will do so with honours. Having begun his career as a youth player at home town club Évreux before moving to then Ligue 1 side Valenciennes FC, he was soon picked up by the Red Bull system and signed for their Austrian side Red Bull Salzburg in 2015.

He made his professional debut for their feeder club, FC Liefering in the Austrian second division, making 16 appearances during the 2015/16 season, while also making his debut for Salzburg in March 2016.

It wasn’t long before the head of the Red Bull herd came calling, not too far away in Leipzig, Germany. 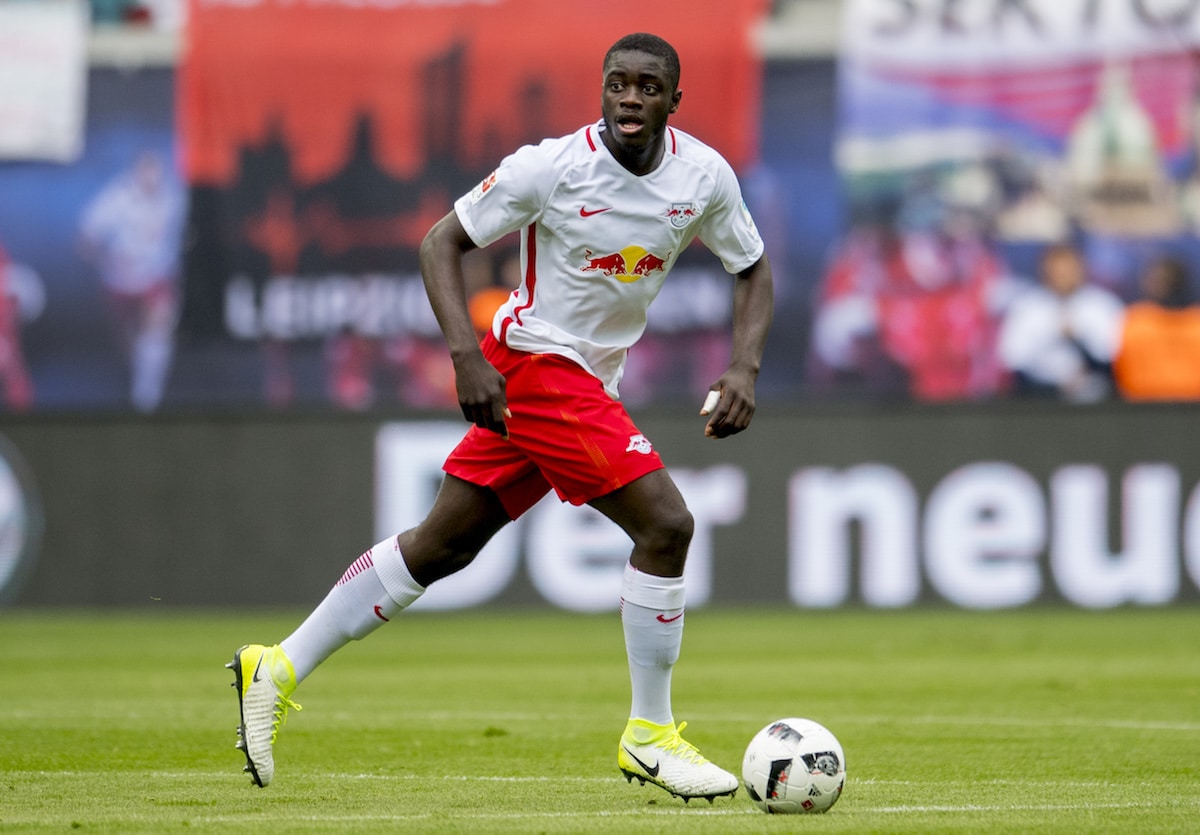 It is here Upamecano has really proven his worth and showed his quality. In the season just gone, he helped Die Roten Bullen to a third-place finish, boasting the best defence in the Bundesliga.

They conceded just 29 goals in 34 games, three fewer than champions Bayern Munich, and fans at the Red Bull Arena saw their side concede just nine goals in 17 home games.

Upamecano’s own season was cut short by a knee injury which kept him out for the second half of it, but he was able to return for the final game of the campaign against Werder Bremen and came on late in the cup final against Bayern.

Perhaps due to his interrupted campaign, Upamecano doesn’t top the charts for many of the defensive statistics in the Bundesliga this season, but still posted decent numbers in several areas.

He averaged 3.2 aerial duel wins per 90 minutes, 4.24 possession wins in the defensive third, and has a pass success of 82 per cent.

He also averaged 2.99 possession wins in the middle third which suggests he’s comfortable being proactive and stepping into midfield to challenge for the ball and is used to playing in a high line. This ability will be aided by the fact he played a handful of games as a defensive midfielder for Salzburg. 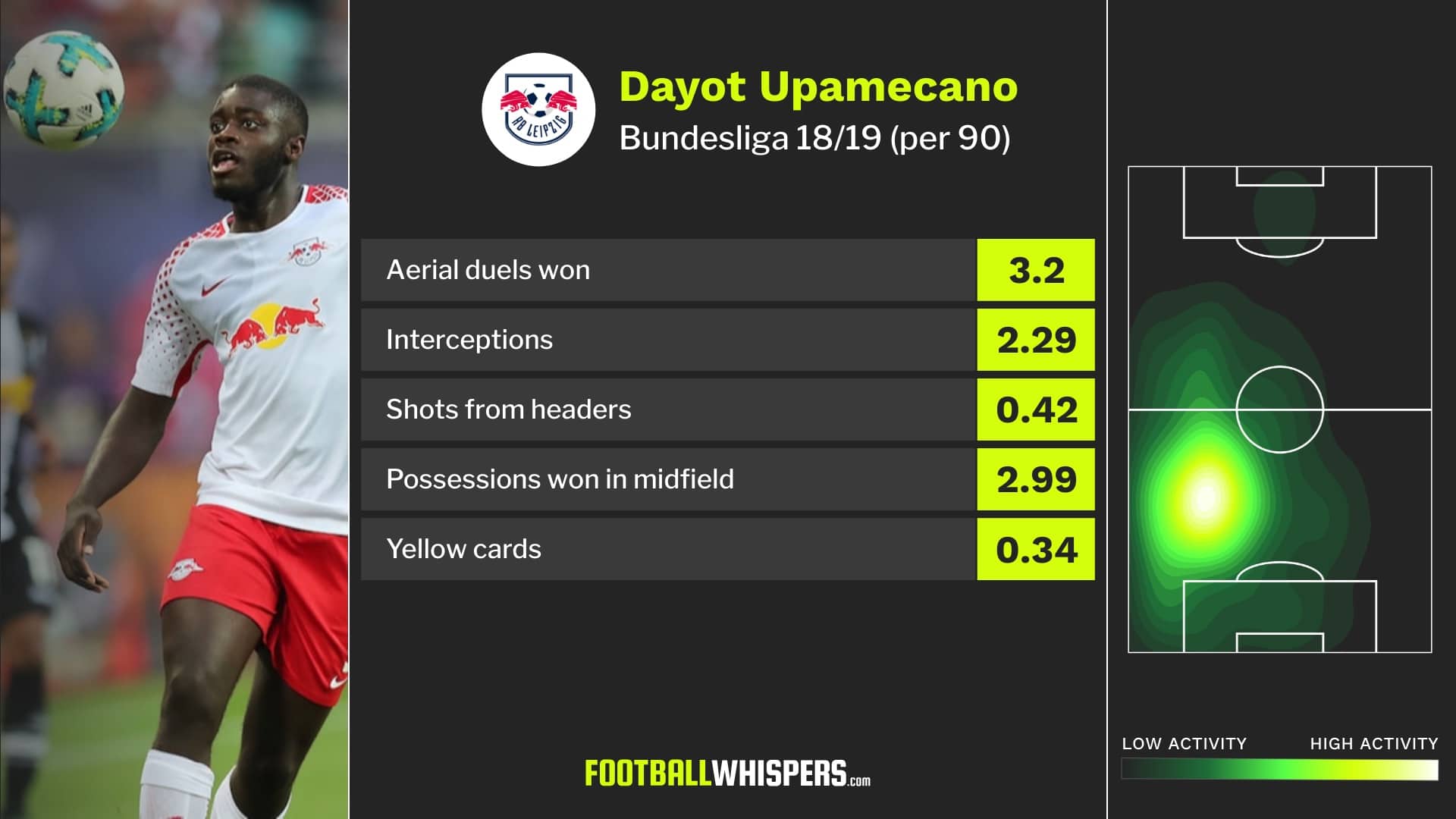 Data and analysis play a big part in recruitment at most professional clubs, so if the latest data doesn’t stand out, what is it about his game which makes him so in demand?

Firstly, he is very quick for a defender, and in this respect he could be compared to Real Madrid centre back and compatriot, Raphaël Varane. This helps make him effective in one-on-one battles when the defence is exposed on the counter-attack. A vital skill to have in an attacking, possession-based team.

“I watch Varane a lot and definitely try to learn from him, but I don't want to play exactly like him,” Upamecano has said.

“Players have to find their own style if they are going to be remembered.”

He’s aggressive and proactive with the ball and without it. He will move into midfield in possession and often avoids the easy pass to his centre-back partner, looking instead for a full-back on either side, a midfielder, or even a forward.

Playing mostly on the left side of defence despite being right-footed, he’s comfortable in a back three or a four which makes him suitable for many tactical systems.

The stats may show a fairly low pass success rate, but the eye test shows he’s good with the ball. The low success rate may be due to the type of interventions which are somewhere between a tackle and a pass, where he wins the ball and tries to find a team-mate in one movement, but doesn’t quite do so.

In terms of international experience, he’s featured for France throughout the age groups from under 16s to under 21s and is eligible for the upcoming European Under-21 Championship if coach Sylvain Ripoll decides he is fit enough following the knee injury.

“He’s among the most reliable defenders in the Bundesliga and practically the leader of the Leipzig defence.”

He’s also eligible for West African nation Guinea-Bissau, but it would be very surprising if he wasn’t called up for France's senior side at some point next season.

The many clubs scouting Upamecano will have witnessed a robust defender with good awareness and good passing ability. One who makes things happen for his team and stops things happening for the opponents.

Physically dominant and tactically versatile, it’s no wonder he’ll be at the top of many club’s shortlists this summer.