Dayot Upamecano has been heavily linked with a switch away from RB Leipzig. Liverpool have been rumoured to be one of the potential destinations for the French international. The Reds would like to have a centre back who is fit and ready to play. Jurgen Klopp has had to do without many of his centre backs for much of the campaign. He has been rumoured to be a fan of the 22-year-old. Now, Goal.com has revealed that Upamecano has a release clause of €42.5 million. His agent has also revealed that the defender is likely to play for a Premier League club or Bayern Munich at the end of the season. 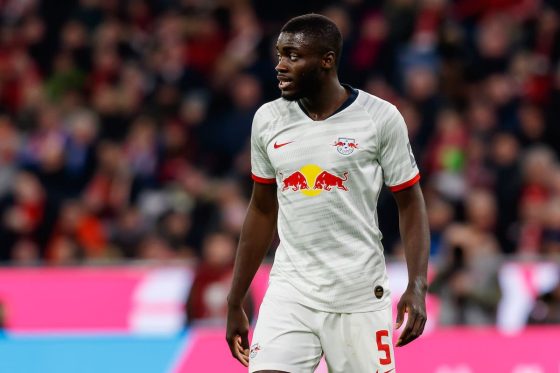 Upamecano has been one of the standout performers in his position across European football for the last couple of seasons. After coming from Red Bull Salzburg in 2016, Upamecano has been able to come of age at RB Leipzig in the last couple of seasons. Bayern Munich CEO Karl-Heinz Rummenigge made a public admission about their interest in the defender, who has a contract with Leipzig only until 2023. Along with this contract, the release clause of €42.5 million would come as a tempting offer for many clubs, as it would be a steal considering the player’s age and quality.

It remains to be seen if Liverpool will be making an offer for the defender in the January window. After being highly sceptical about Liverpool’s chances of signing a defender in this window, Klopp was finally forced to make an admission that the signing before the window closes on February 1. Joel Matip’s injury in the recent win over Spurs has worsened Liverpool’s defensive crisis even further and the club cannot afford to drop any more points in the race to defend the title.

However, any defensive signing made by Liverpool is only likely to be a temporary signing.