Signings from the Eredivise, as the cliché goes, either turn out to be a spectacular success or a spectacular failure. And in the case of Brighton‘s Davy Pröpper, halfway through his maiden season in the Premier League, it looks as though he will fall into the former category.

Costing a club-record £11.7million from PSV Eindhoven, the pressure was on Pröpper to prove his worth from the start. Being stationed next to the impressive Dale Stephens only heightened the task in hand.

But Pröpper has impressed from the outset. Not in the same way fellow summer signing José Izquierdo has, with his electrifying pace, trickery and ability to beat a man ensuring he can only stand out, but by sitting in front of the back four and quietly pulling the strings.

Pröpper would have had an extra spring in his step when he return to Sussex following the international break. Having played the final 24 minutes of the Netherlands' 1-0 defeat to England last Friday he started the 3-0 demolition of European champions Portugal three days later.

The Dutch were impressed. There was little doubt he had potential. But the feeling was he did not reach the full extent of it in his time at PSV.

However, the consensus is moving to the Premier League and Brighton has helped him step up to reach a new level.

“At PSV they often said: Davy does not realise half how big his possibilities are, so modest, maybe a little too much.

“But in England he seems to have been brought to life. The Brighton marathon man has an excellent debut season and only missed 15 minutes in the Premier League.”

He will be more important than ever on Saturday when the Premier League resumes as the imperious Stephens is a doubt for the visit of Leicester City with a hamstring complaint.

“He was away with us but at this moment it is probably too big a risk for us to start him,” Albion boss Chris Hughton told The Argus.

“We have to do what is right for what he is feeling and we can only get that advice from the medical department.”

So why is Pröpper so important to the way Brighton play?

In a short space of time the Arnhem native has made himself an integral member of this Albion side. He had done so by carrying out Hughton's instructions to the letter.

Brighton play the second-most long balls per 90 in the Premier League (75) to Burnley (80). Soaking up pressure they look to catch their opponents on the break with well-aimed, long passes forwards. It's simple, but effective.

Pröpper is a big part of the game plan and his role splits into two functions.

Firstly, he must help win possession back for his side. The graphic below makes him second best for interceptions per 90 versus Beram Kayal and Stephens – the only other available deep-lying central midfielders at the club – and the third-most effective tackler of the trio. 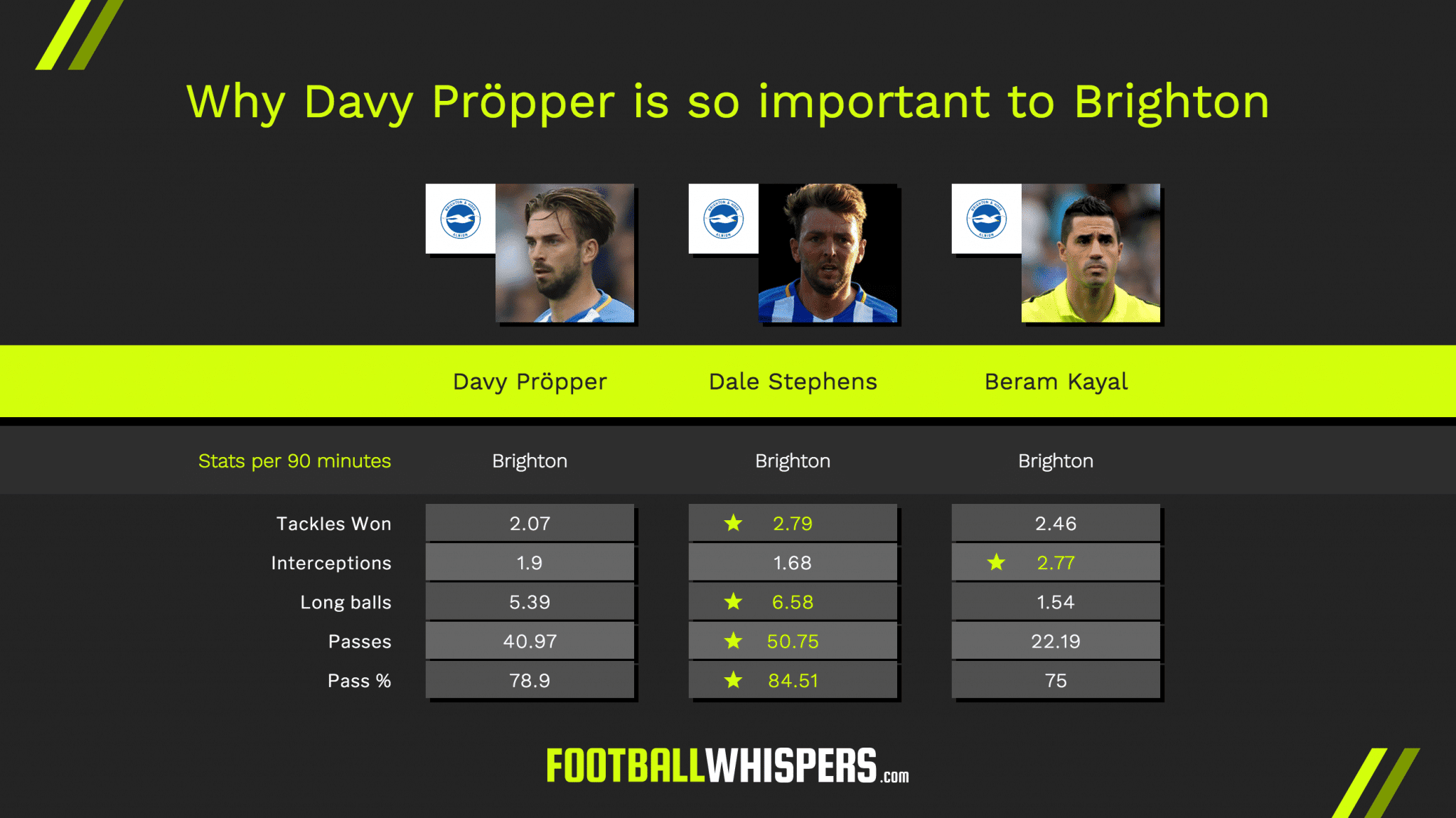 However, Kayal has played just 229 minutes in the Premier League this season to Pröpper's 2,686, skewing his figures somewhat.

On the other side of the ball, Pröpper is every bit as important when it comes to getting the Seagulls moving. 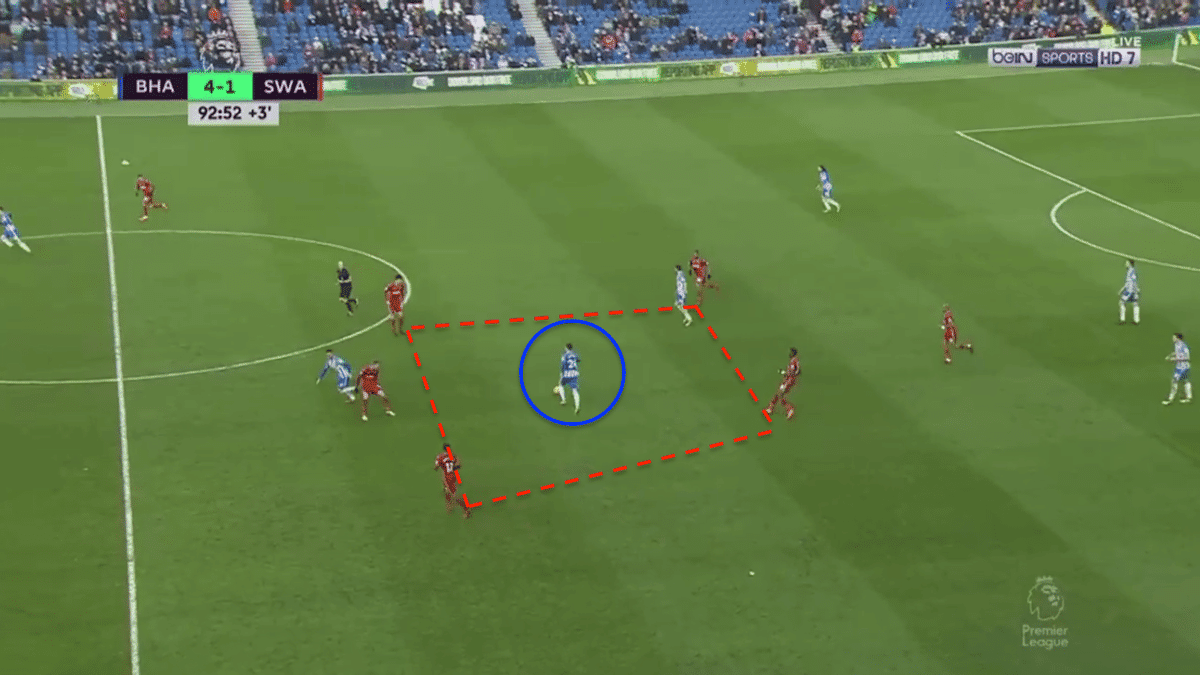 In the image above, taken from Brighton's crushing 4-1 win over Swansea City in February, Pröpper displays his vision and range of passing to create a chance from nothing for Solly March. 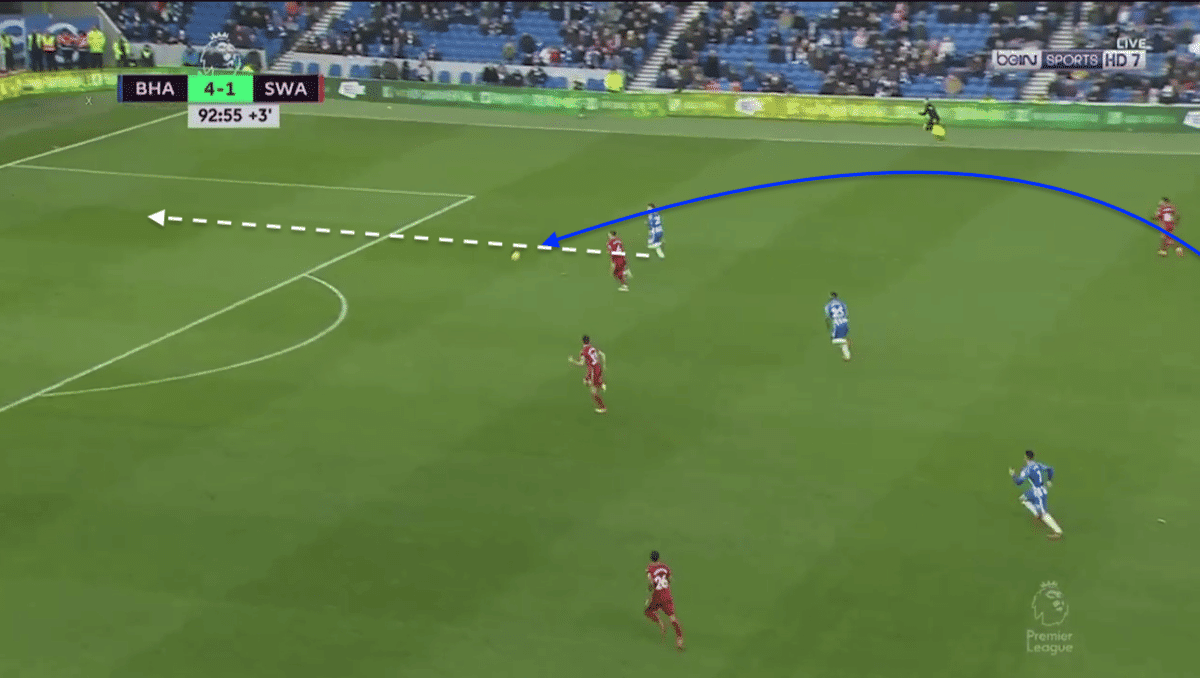 With no pressure on the Dutchman he collects a short pass back to him, looks up and sprays the ball out to the right for March who is able to get in behind the Swans' defence in a heartbeat.

That, in microcosm, is what he is instructed to do in Hughton's side and why he has been a success.  With Stephens set for a watching brief against Leicester on Saturdayt, Kayal should come into the side alongside Pröpper.

That means the onus on Pröpper will be increased. But if he performs as he has been, he can keep the Seagulls soaring high.