When Ronald Koeman benched Ross Barkley for Everton's final Premier League fixture on Sunday it was a message to the midfielder: Sign up or we'll replace you.

The England international is out of contract at Goodison Park next summer. Barkley, rightly or wrongly, is a £50million commodity – a fee Everton cannot afford to pass up for the Tottenham Hotspur transfer target.

Everton have, reportedly, offered Barkley a contract worth up to £100,000 a week. But the 23-year-old missed Monday's deadline to confirm his intentions and plans are afoot to replace the midfielder.

Ajax skipper Davy Klaassen, who plays in the same position, is, reportedly, top of Koeman's wanted list. The Dutch international moved to the Amsterdam ArenA as a youngster when Koeman was manager.

With that in mind we've run the rule over the Dutch international to see what he'd bring to Goodison Park. 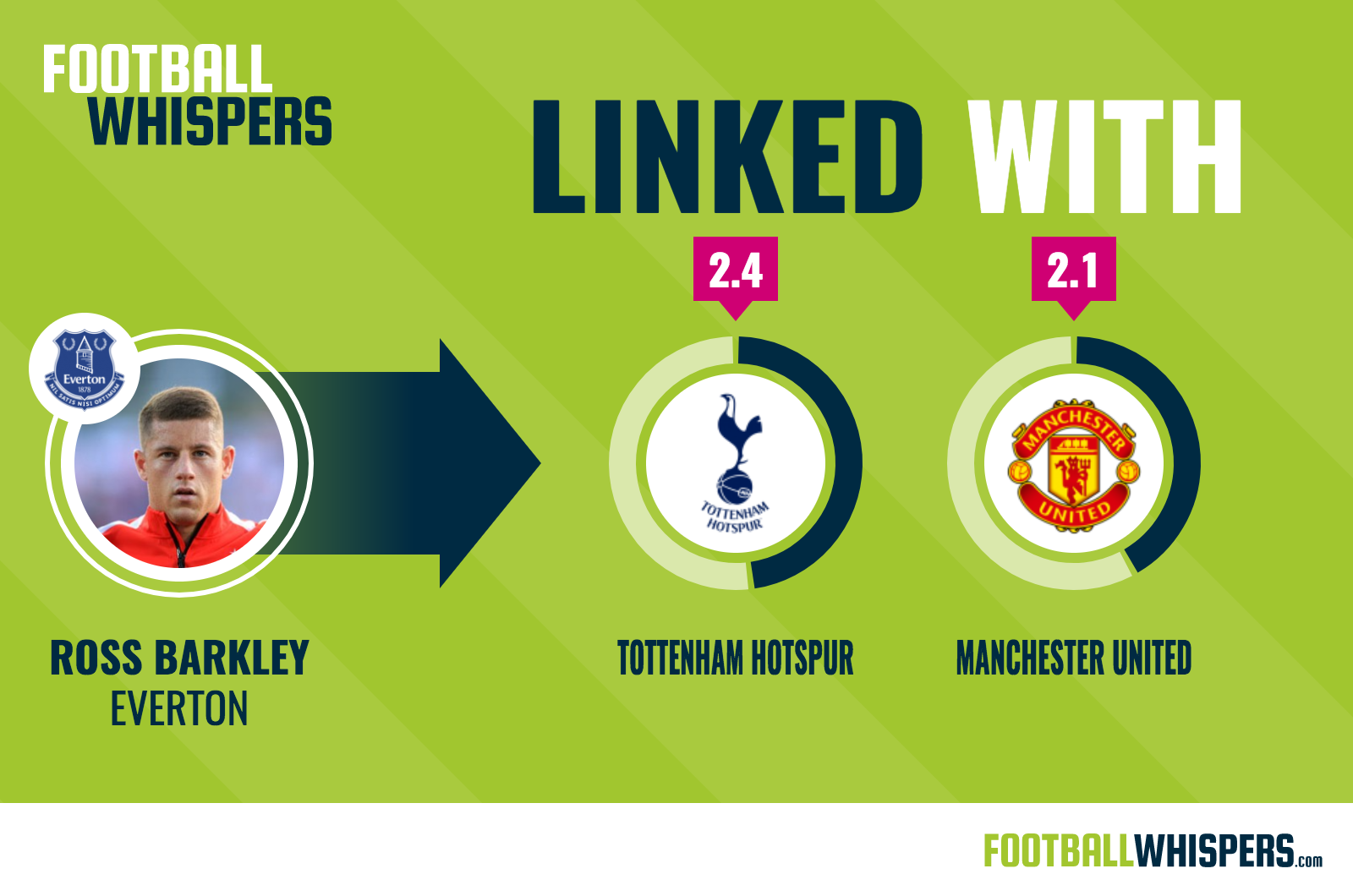 The oldest homegrown member of Ajax's exciting young side at the grand old age of 24, Klaassen was born in Hilversum, 19 miles south-east of Amsterdam.

In 2004 he joined Ajax, after spells with local clubs HVV de Zebras and HSV Wasmeer, and won the Nike Eredivisie League in 2012 with Ajax's A1 youth side, as well as reaching the final of the NextGen Series where de Godenzonen were beaten by Internazionale.

The 2011/12 campaign was Klaassen's breakthrough. The teenager made his first-team debut as an 85th-minute substitute in Ajax's Champions League group stage fixture at Lyon on November 22. Five days later Klaassen was handed his Eredivisie debut, scoring just 42 seconds after coming off the bench against NEC Nijmegen.

Klaassen went from strength-to-strength and, although he only made three first-team appearances the following season, soon established himself as a key component in Ajax's midfield.

He is one of the more experienced heads now – only defensive midfielder Lasse Schöne, at 30, is older – and has enjoyed his most prolific season for the Amsterdam club, scoring 20 times in all competitions.

Klaassen is comfortable playing as a number ten behind the main striker or, as has been the case in the Eredivisie, as a more conventional central midfielder.

He did not enjoy the best evening in Wednesday's Europa League final defeat to Manchester United. However, Klaassen has shown throughout de Godenzonen's run to the final the creative quality he possesses.

This has been the best goalscoring season of 11-cap Dutch international's career and the secret to that is his awareness and timing. Despite his reputation, Klaassen is able to ghost between the lines and arrive in or around the penalty area at the perfect time to score.

His goal against ADO Den Haag this season demonstrated that perfectly. Klaassen took a quick throw-in before bursting between four bemused ADO defenders to control a chip over the top and lashing home.

In the images below, taken from Ajax's 5-1 win over Heerenveen in April, Klaassen exchanges passes with David Neres and tucks the ball into the empty net. The defending is questionable but Klaassen has a knack of finding pockets of space where there shouldn't be. 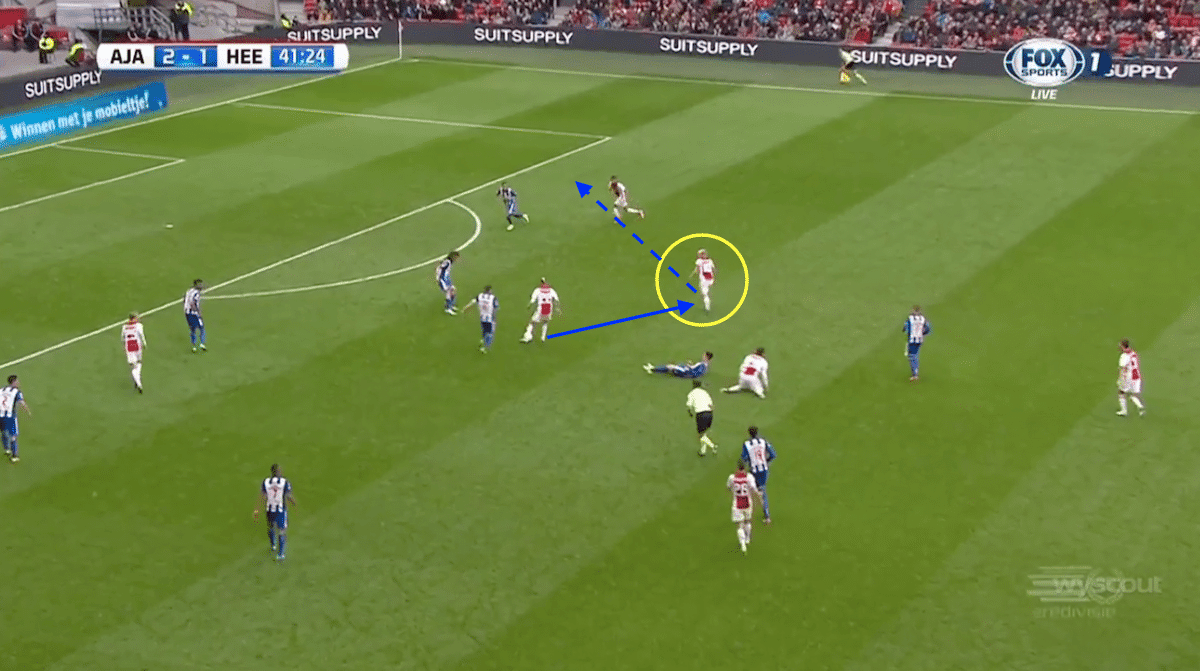 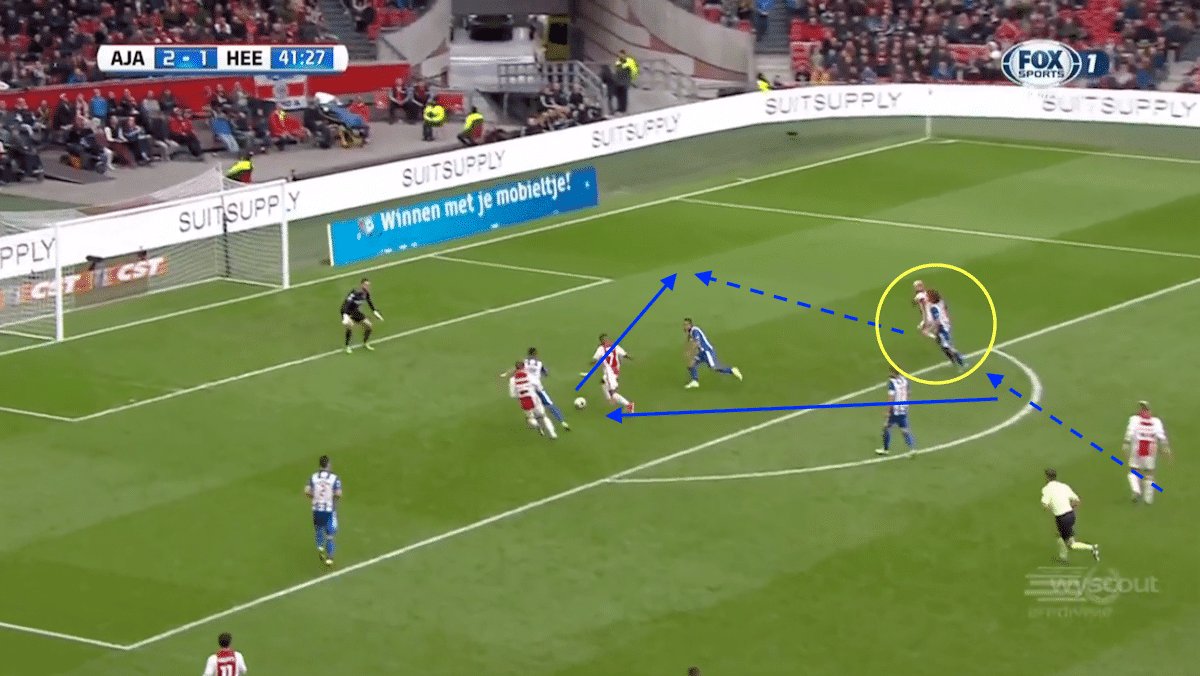 In the next set of images, taken from Ajax's win over Schalke in the Europa League quarter-finals, Klaassen is again able to find enough space to score the Dutch side's second goal. 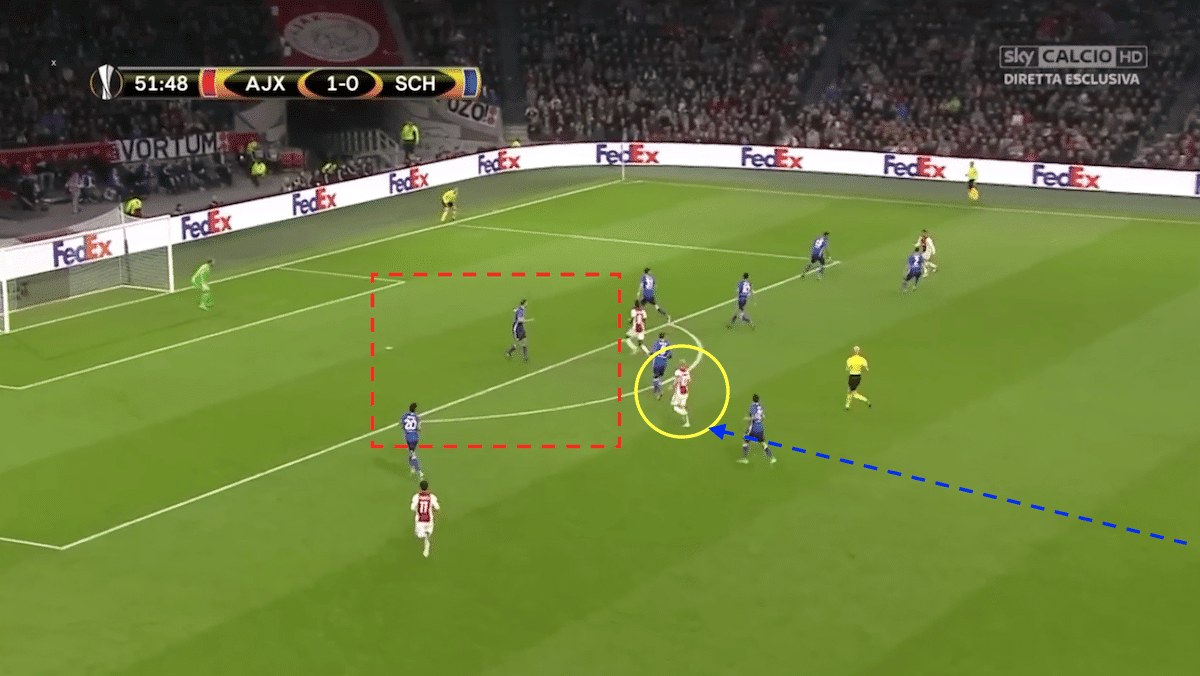 Klaassen follows Schalke's Leon Goretzka  from deep all the way to the ‘D' of the penalty area. He then stops to shake himself free before resuming his journey just in time to meet Justin Kluivert's cross from the right. 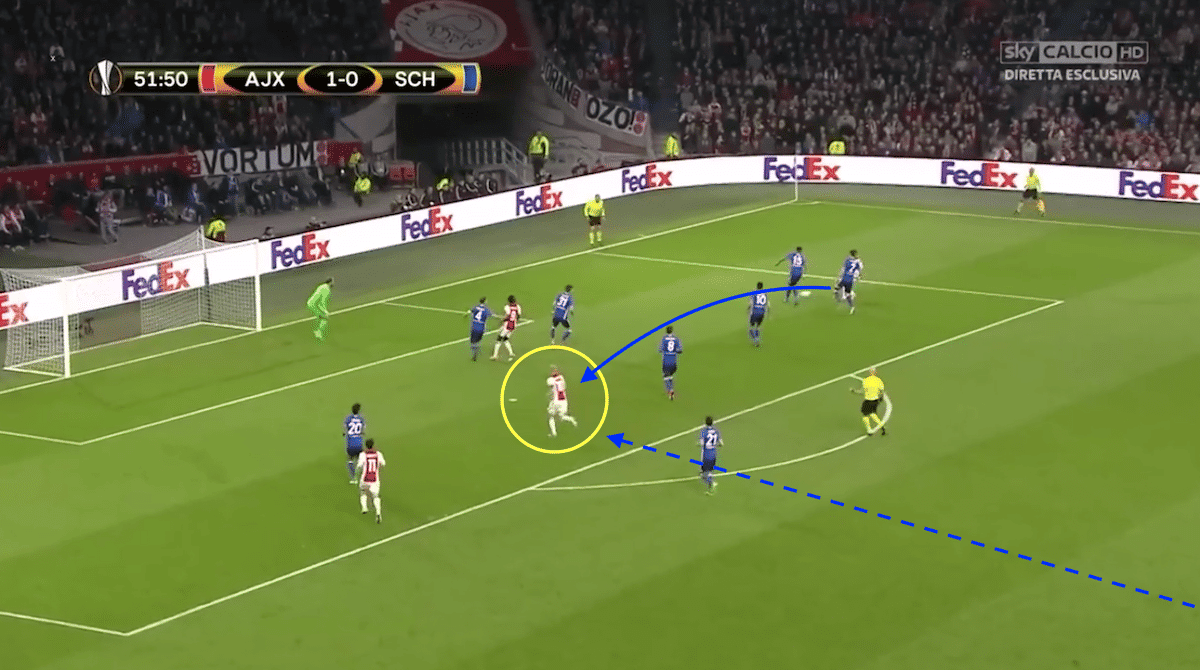 It is not just arriving late that Klaassen specialises in. He scores all types of goals. He is a confident penalty taker, a good header of the ball and has also scored several goals from outside the penalty area this season – his sumptuous effort to open the scoring against rivals PSV Eindhoven case in point.

Although he has only registered four league assists this term he is also a provider and his vision is highlighted again in this attribute.

In the still below, taken from a friendly against RB Leipzig in January, he dissects the Germans' defence with a sumptuous ball which Amin Younes turns home. 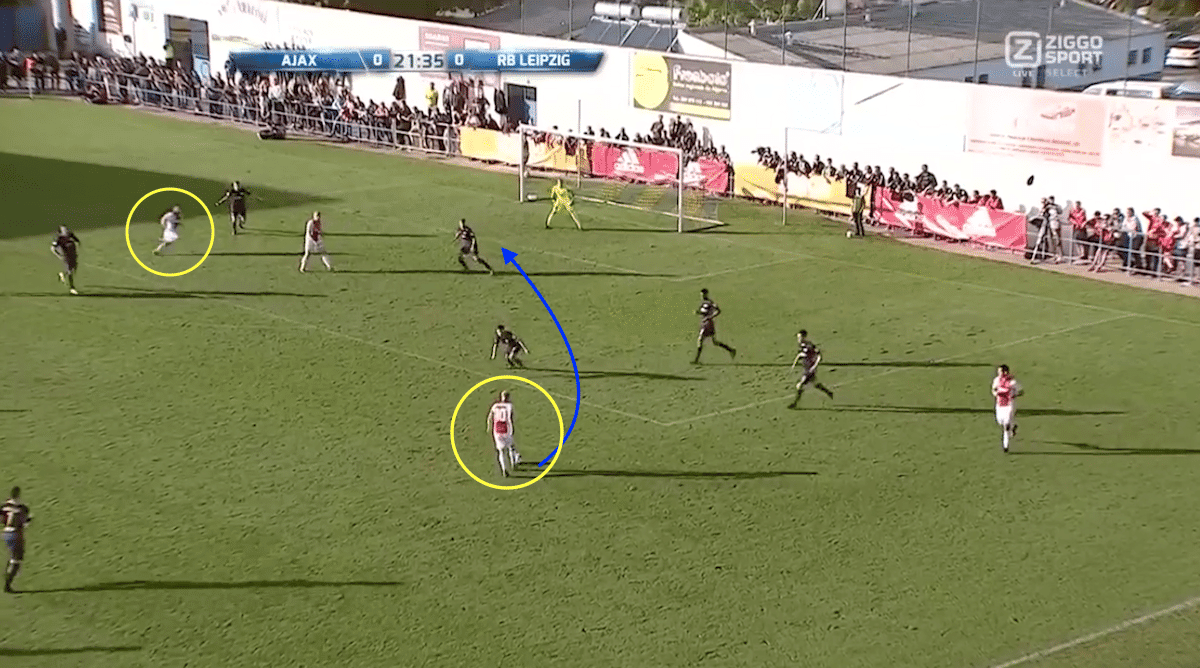 At 24 Klaassen is young for a captain. That is partially due to the fact the only player older than him is the aforementioned Schöne. But he also leads by example in his goals, work-rate, desire and commitment. He is determined, brave and aggression – all vital qualities for a midfielder and captain.

There are few drawbacks to Klaassen's game. He is a good all-round midfielder and has hit double figures in three of the last four seasons, improving on last season's tally of 15.

The question mark against him, however, is that in the Eredivisie he is playing against lesser players. The space he is afforded sometimes gives him plenty of time.

Klaassen has only won 11 caps for the Oranje since making his debut in 2014. In a far from strong period for the Netherlands that is telling.

At Ajax, Klaassen does not have to do a lot of defensive work as the Amsterdam club see more of the ball than their opponents most weeks.  However, in a stronger league he would have to contribute more without the ball and that could be his downfall.

Schöne is the deepest-lying of Ajax's midfield trio and, as such, completes more defensive actions than Klaassen with 81 interceptions, seven blocks and 47 clearances. Those figures mean he has completed the fifth-highest number of defensive actions in the Eredivisie. Klaassen, on the other hand, has made 34 interceptions, ten blocks and 34 clearances. 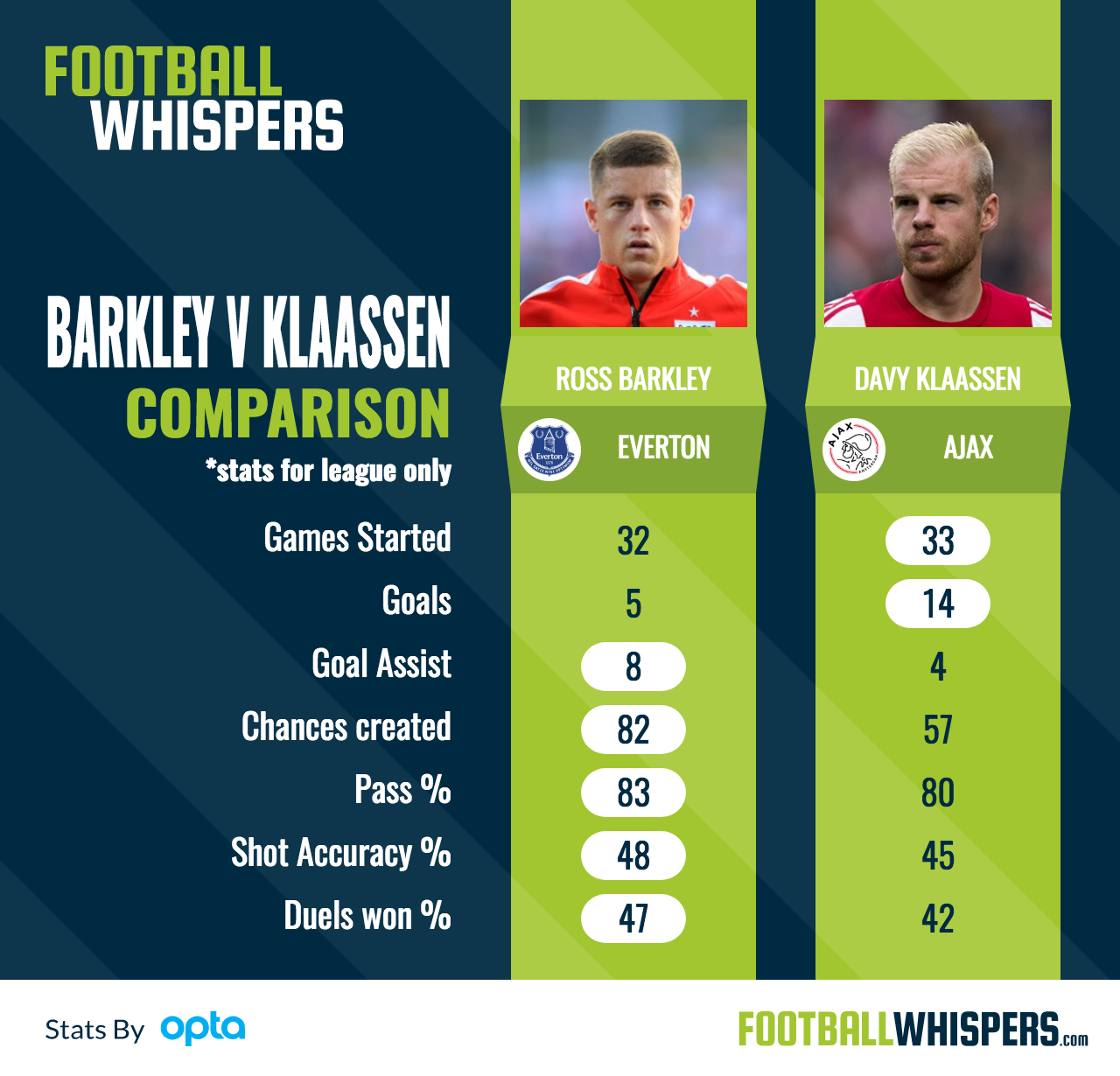 Barkley's future looks, bar a remarkable turnaround, to be away from Goodison Park. Klaassen is well known to fellow Dutchman Koeman and would represent a young, ambitious and economically viable option.

However, he would also be a gamble. Players out of the Eredivisie tend to go one of two ways in the Premier League: Ruud van Nistelrooy or Alfonso Alves. All the evidence suggests Klaassen would be closer to the former than the latter. But until he arrives it is impossible to know.

Koeman has been flexible this season, playing 3-4-2-1 or 4-2-3-1 and Klaassen could replace Barkley directly in either. Either by playing behind Chelsea transfer target Romelu Lukaku – or whoever is up front for the Toffees next term, as a number ten or as one of two attacking midfielders. That role would hide his defensive shortcomings.

Wednesday's Europa League final was not the glorious evening Ajax hoped for. But they showed on their run to the final in Stockholm there are numerous young talents there. Matthijs de Ligt and Kasper Dolberg might get more headlines but Klaassen will surely be the next to move to the Premier League.