In trying circumstances, Zinedine Zidane has had no choice but to rotate and improvise in order to ensure his defensive line remains solid.

However, there is a genuine possibility that, come the summer transfer window, he will want to prevent future headaches by simply adding to his centre-back options.

The rumours linking Real Madrid with a move for Davinson Sánchez are in line with this idea. Spanish sports daily Mundo Deportivo has reported that the club are now ready to compete with fierce domestic rivals Barcelona for the player’s signature.

This report correlates with Football Whispers’ own transfer index, which gave Sánchez to Real Madrid a rating of 1.3 on April 28. Since then, our Sánchez to Barcelona rating has – perhaps not coincidentally – dropped steadily, first from 1.7 to 1.5, then from 1.5 to 1.1. 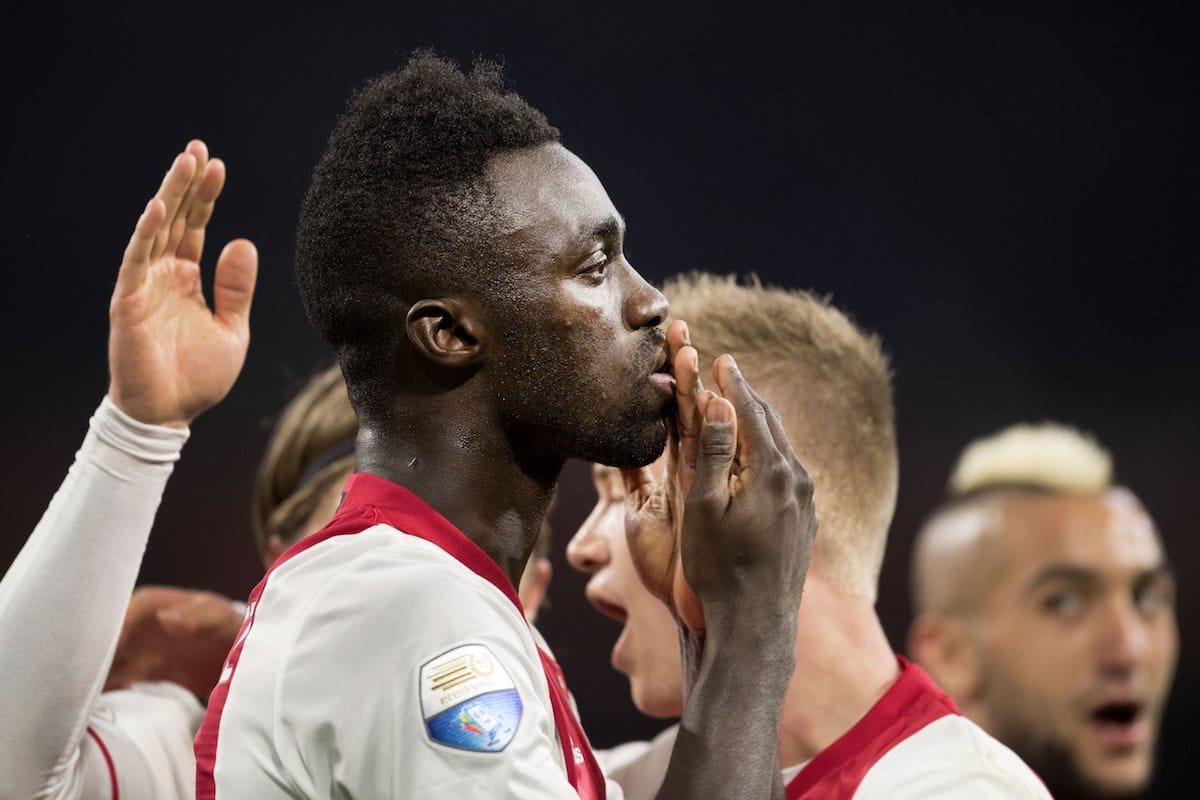 At just 20 years of age, Sánchez is already widely regarded as one of the finest central defenders in Dutch football. However, he first made his name in Colombia, his home country, with Atletico Nacional.

He made his debut for the club in October 2013 at the tender age of 17, under the guidance of then-coach Juan Carlos Osorio. It did, however, take another three seasons for the youngster to establish himself in the first team.

In what was a stunning 2016 campaign for player and club, Sánchez helped Atletico Nacional to see off the likes of Penarol, Rosario Central and Sao Paulo on their way to victory in the Copa Libertadores, being crowned continental champions for the second time in their history.

During this run, the budding star attracted covetous looks from some of European football’s finest, with Barcelona among those supposed to be interested in signing him at the time.

However, with a desire to continue playing regular, competitive, top-level football, he chose instead to join Ajax.

Sánchez couldn’t have chosen a better team to sign for.

Ajax’s ability to scout and nurture talent is legendary. Not only do they have a tendency to find the game’s next superstars, but they are exceptional at developing individuals and setting them up for moves to more reputable leagues.

The Dutch giants’ focus on creating total footballers – players able to operate well in all phases of the game, with the versatility to take on multiple different positions if need be – has been successful for many years, and their latest crop looks just as exciting as previous generations.

Tottenham trio Christian Eriksen, Jan Vertonghen and Toby Alderweireld and Manchester United’s Daley Blind all came through the Ajax academy, while others such as Barcelona striker Luis Suarez have benefited greatly from the Amsterdam side’s teachings during time spent with the club during the formative stages of their careers.

This season, skilful 19-year-old forward Matthijs de Ligt have all broken through with the intention of emulating their famous predecessors. But Sánchez has arguably been the pick of the bunch. 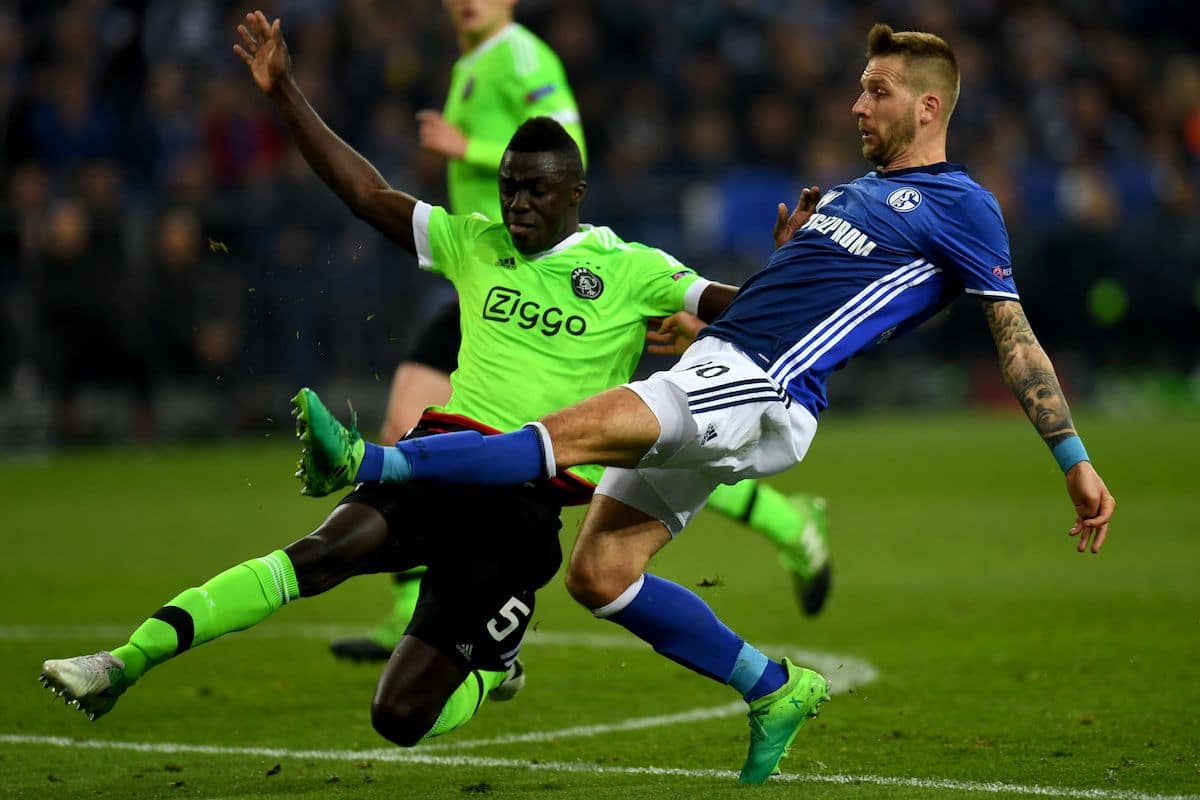 Read More: Players to Watch during the UEFA Europa League

Ajax’s commitment to young talent has continued under Peter Bosz, who was appointed head coach last July after a brief spell in Israel with Maccabi Tel Aviv. This commitment is shown by the average age of the team’s usual starting line-up being just over 23 years old.

Another aspect of club tradition that has not changed under Bosz’s leadership has been their steadfast usage of the 4-3-3 system with a fluid, attack-minded style of play. This has led to them scoring 72 goals in 32 league games – more than two goals per game on average – and Sánchez has been integral.

While he is nominally a centre-back, the team’s universal approach necessitates that even the defenders are both comfortable on the ball and adept at using it effectively. This requires sound technique, composure, and intelligent distribution.

Sánchez has shown his passing ability throughout his debut Eredivisie campaign. No other player in the league has averaged more passes per game than his 71.1. In addition, his pass success of 89 per cent is one of the highest in the division.

The statistics portray a basic efficiency, but this may also have a lot to do with the solid overarching structure evident at Ajax. In order to show the full awareness and quality of the individual’s possession game, it is important to use graphics.

The below images are taken from Ajax’s 1-0 defeat to PSV Eindhoven. The first image shows Sánchez passing back to his goalkeeper, Andre Onana, before moving quickly to his left to create space between him and the PSV forward and offer a more viable passing outlet. 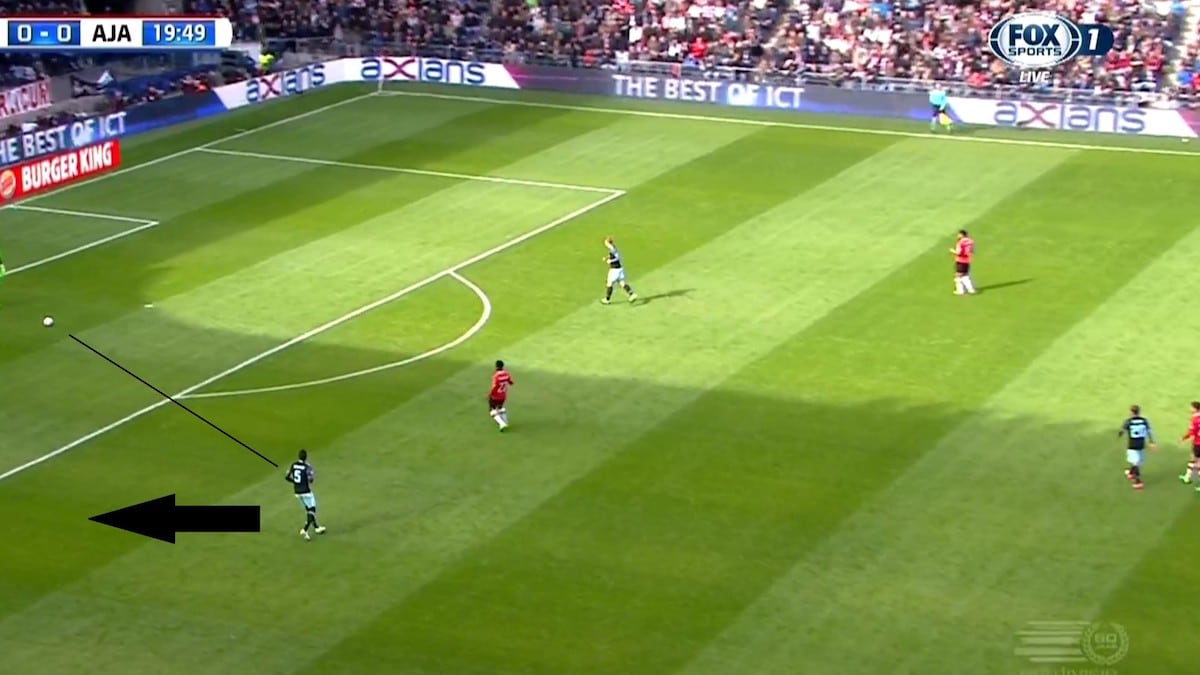 After receiving the ball from Onana, Sánchez is pressured by the PSV forward. But, rather than simply pass back to the ‘keeper or make a hurried and inaccurate attempt at a long ball, he controls the ball and drives forward, resisting the pressure and successfully finding a central pass to a midfield team-mate, as shown below. 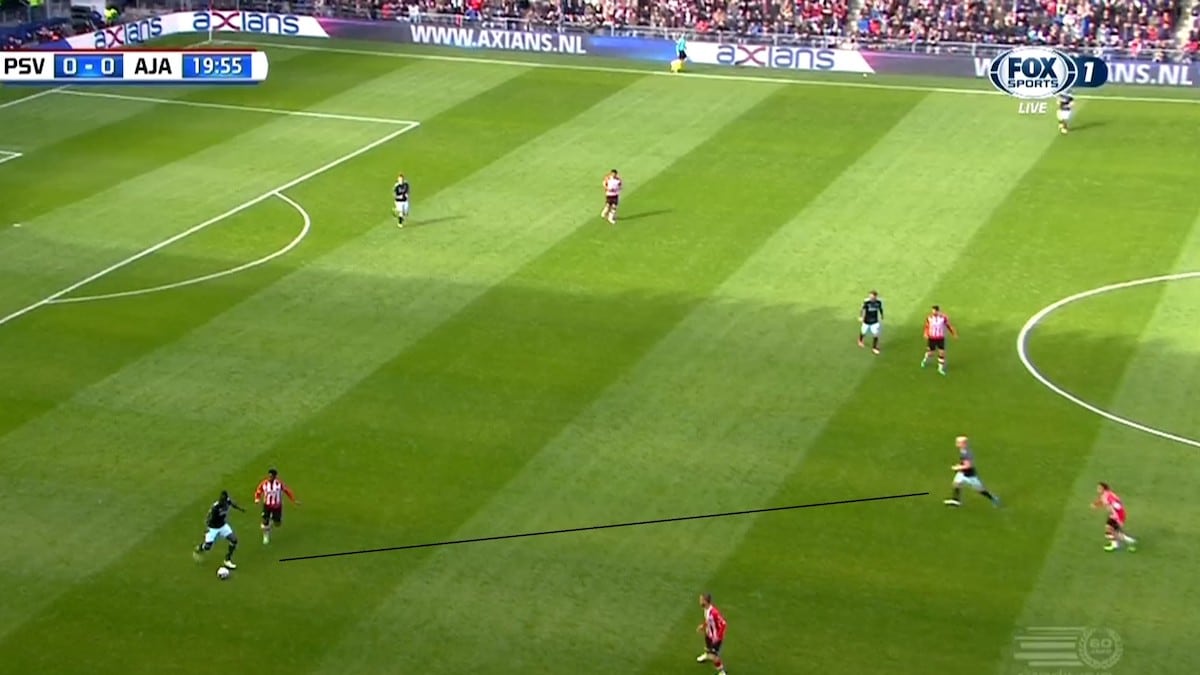 After being given the ball again later in this same move, Sánchez is forced to play back to Onana through good pressing and man-to-man coverage by the opposition. However, even in this comparatively simple pass, the Colombian plays the ball to his keeper’s left, prompting a pass to the Ajax left-back who is in more space. 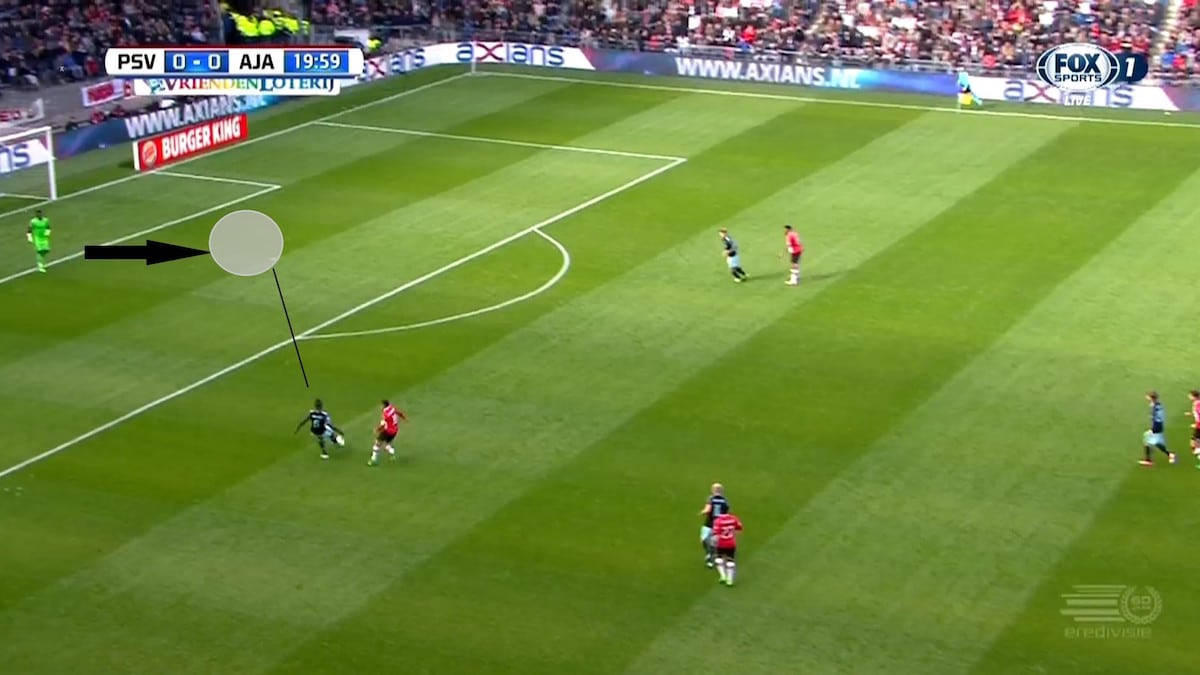 The 20-year-old confidence and ability in possession is also shown in the below series of images, where, having intercepted a loose opposition ball, he controls and drives forward, committing markers before finding an attacking team-mate with a vertical forward pass. 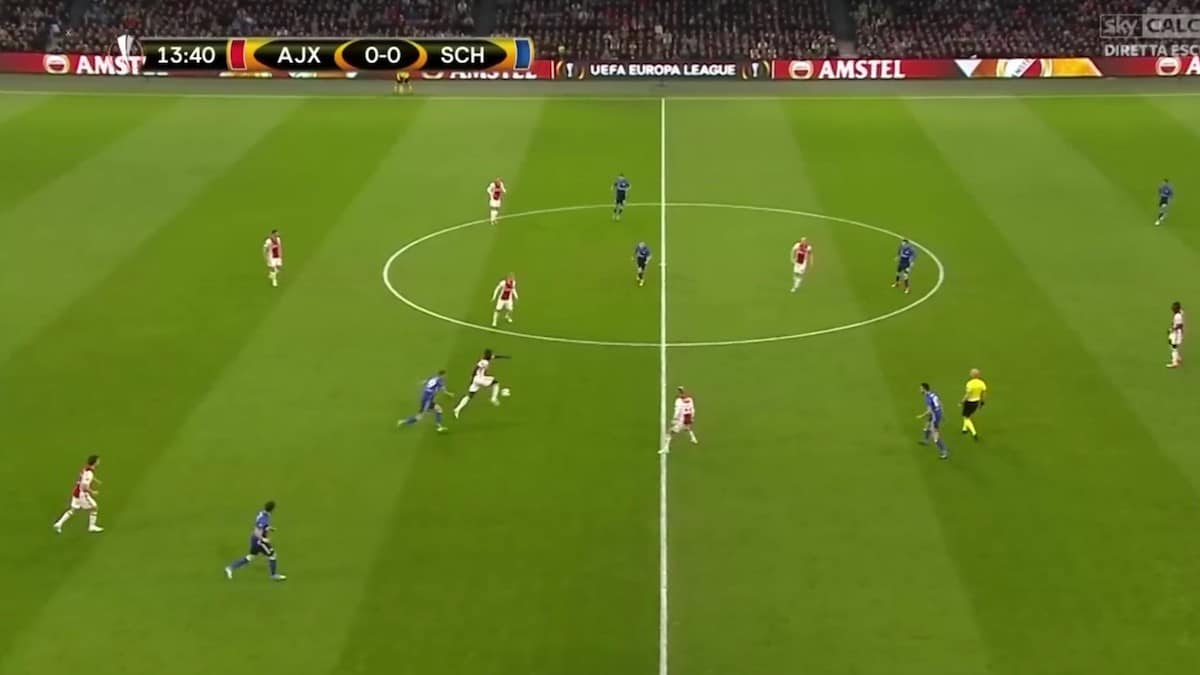 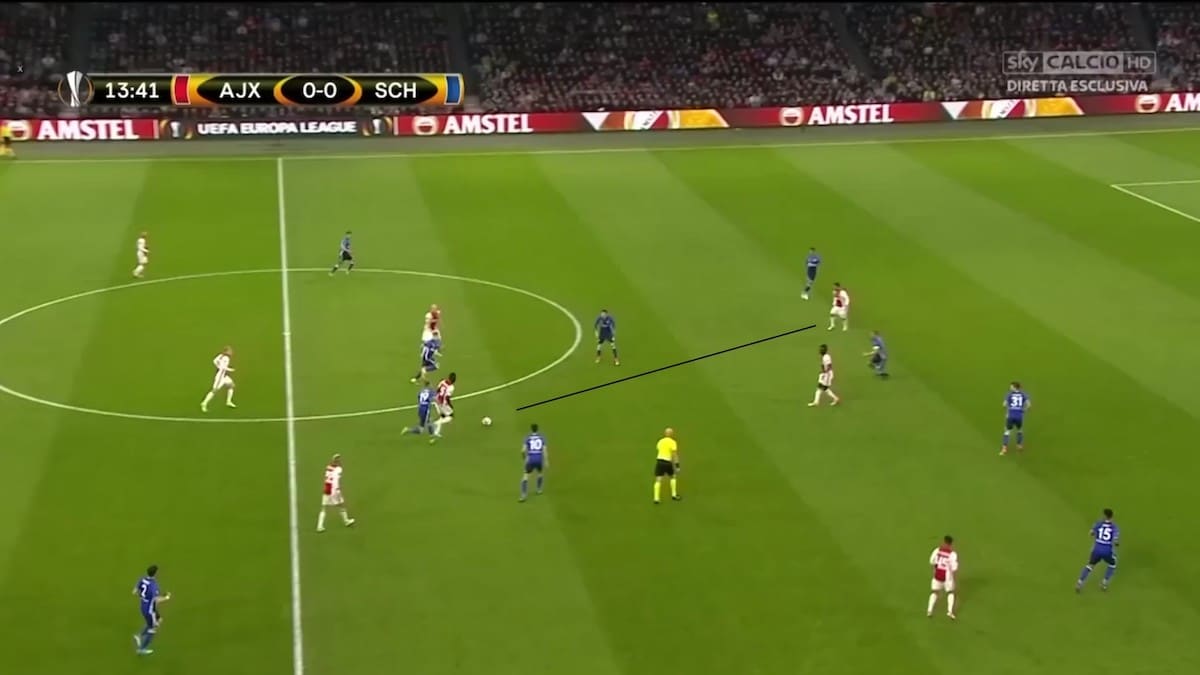 Defensively, Sánchez uses an imposing 6’2” physique to dominate aerially, where he is a powerful presence. And, while his positioning is not always ideal, he has exceptional mobility that allows him to recover quickly, as highlighted in the below image. 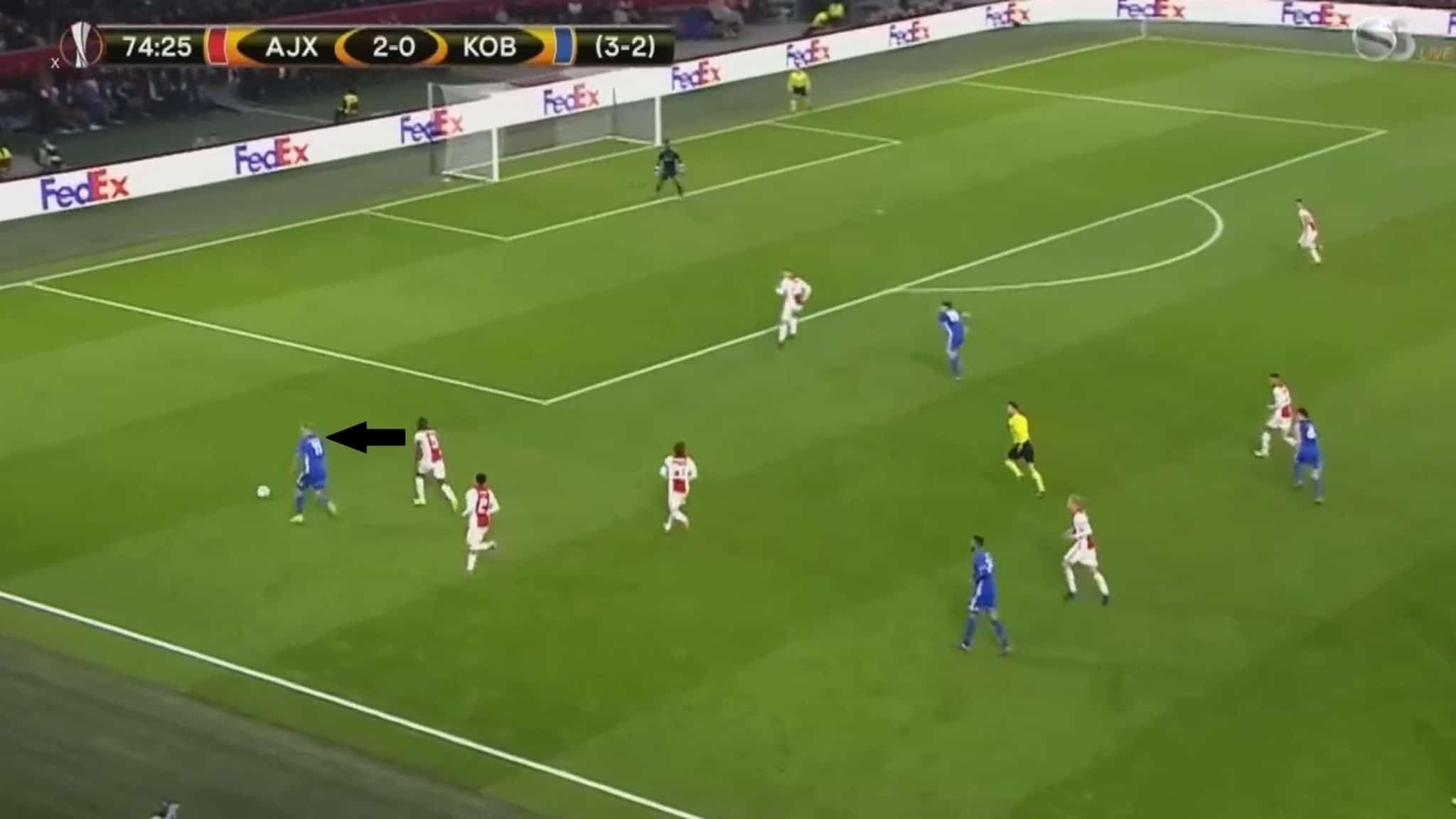 IS SÁNCHEZ READY FOR REAL MADRID?

At such a young age and with only two full seasons of first-team football under his belt, Sánchez is perhaps in need of more time before making a move to one of Europe’s top clubs. Thus, a second campaign with Ajax could, and should, be on the cards.

However, Real Madrid have an ageing defence, with Pepe and Ramos both in their 30s. Nacho and Varane could well be Zidane’s next central defensive partnership, though there remain question marks over the former.

Sánchez already has the technical, physical and athletic qualities to thrive in La Liga, and with some tactical seasoning he could be ready to partner Varane at the heart of Real Madrid’s back four in a matter of years.