Tottenham Hotspur have been decidedly frugal in the summer transfer market thus far, refusing to spend a penny on new additions up to this point. While their Premier League rivals make big changes and throw huge sums of money around in the process, Spurs essentially remain the same.

However, this may not be the case when the transfer window does eventually slam shut in a few weeks. They have been heavily linked with Ajax centre-back Davinson Sánchez of late, and reports suggest a move for the player could be close to fruition.

According to the Evening Standard, Tottenham – having already held preliminary talks with the Dutch club – sent representatives to Amsterdam with the aim of furthering negotiations. A deal has not yet been struck, but it seems likely they will win the race to sign one of the most highly-rated young players in Europe.

Sánchez has been coveted by many of the continent’s top clubs in recent months. He was a Real Madrid and Barcelona target, while Chelsea were also said to be interested in his signature at one stage. The rumours came on the back of the Colombian’s fine first season with Ajax, during which he helped his side to the Europa League final.

Mauricio Pochettino’s preference for the 4-2-3-1 formation has remained at the beginning of this season, despite the success Tottenham enjoyed playing with a back three last term. In the ten league matches they played in the 3-4-2-1 system, they won eight and drew two. But for last weekend’s clash with Newcastle United they returned to the tried and tested back four.

The result was a comfortable 2-0 win in a match that Spurs gradually eased into, asserting their control and making the most of the one-man advantage they gained following Jonjo Shelvey’s sending off. On the evidence of that game, the lack of summer signings doesn’t seem to have visibly affected the team in any way.

However, given the performances and progress made when using a back three last season, Pochettino may want to use the system again in this campaign. Having a good Plan B can be hugely rewarding when competing domestically and on the continent, as Real Madrid showed with their switch to 4-3-1-2 at the business end of 2016/17.

But if Tottenham are to use the three-man defensive line more often, they are going to need more centre-backs. At present, Toby Alderweireld, Jan Vertonghen and Kevin Wimmer are their only natural options in the position of real quality. Eric Dier can fill in effectively, Ben Davies is also competent moving in from left-back, but in truth they are also required in other areas.

This need for central defensive cover and competition is perhaps what instigated the pursuit of Sánchez. Speaking of the player, former Ajax team-mate Davy Klaassen – now at Everton – said: “He is a beast. I understand why he has been associated with top clubs. He has the stature, the power.”

HOW DOES SÁNCHEZ COMPARE?

Last season, Ajax dominated the ball more than any other Eredivisie side. Their average possession of 59.7 per cent was more than three per cent over the average of their nearest rivals in this aspect, PSV Eindhoven. For context, Tottenham averaged 57.4 per cent.

Considering his side saw more of the ball, it is impressive to note that Sánchez averaged more completed tackles – 1.5 – than any of Spurs’ primary central defensive options, Alderweireld, Vertonghen and Dier. He also made considerably more interceptions per game than the trio. 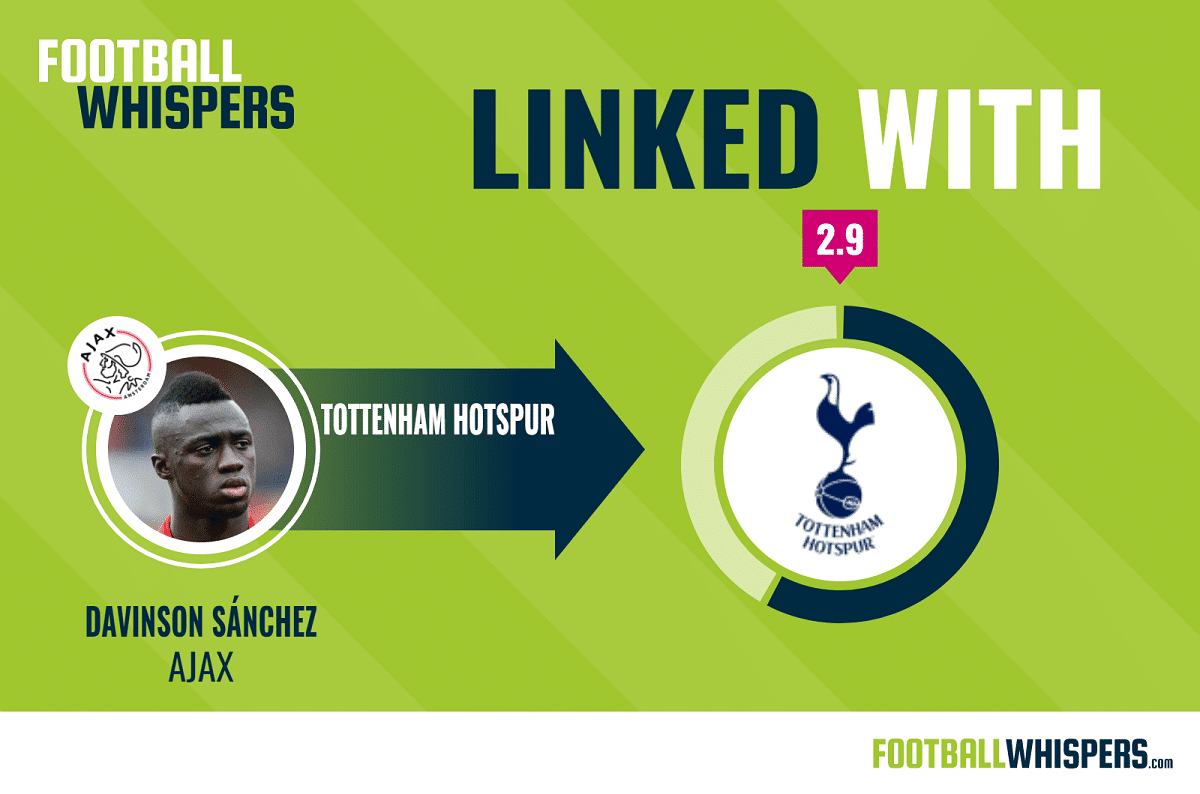 On the ball, the Colombian was also more involved, with his average of 70.9 passes completed per game unrivalled by any of Tottenham’s centre-backs. While this statistic could simply be attributed to the fact his team had more of the ball, his higher success rate is a sign of an assuredness that would be welcome in Pochettino’s back line.

Sánchez completed 88.9 per cent of his passes, a rate bettered by just three players in the Eredivisie. By comparison, the any of the aforementioned Tottenham trident came to this was Dier’s 86.7 per cent.

The flexible Englishman was also the only one of the three to notch up more key passes per game – 0.4 to 0.2. However, it’s worth noting this figure may have something to do with often playing in a slightly more advanced role on the pitch.

Offensively, Sánchez completed more dribbles per game than Dier and Alderweireld, although his 0.4 average was doubled by Vertonghen. But in terms of attacking output, the Ajax man’s six goals and two assists over the course of the league season couldn’t be equalled by Tottenham’s centre-backs.

Given the failure of some players, including Spurs’ own Vincent Janssen, to adjust to the Premier League, it could be argued that success in Dutch football is not always a good barometer for success at the highest level of the English game.

In the continent’s second-most prestigious club competition, he averaged over twice as many tackles, more interceptions, key passes and completed dribbles. However, his average passes and pass success percentage did drop off.

WOULD HE BE A GOOD SIGNING?

Stylistically, Sánchez would give Tottenham a different kind of central defender. He is not simply composed on the ball and a capable passer, but likes to venture forward on occasion, taking on and beating opposition players.

In this sense, he could act as a right-sided version of Vertonghen within Pochettino’s back three. However, he would also bring the power and athleticis the Belgian lacks.

Sánchez’s statistics are impressive, though there are some caveats. This was his first season in European football, meaning the sample size for judgement of his displays is relatively small. On top of that, the step up from Eredivisie to Premier League is one that cannot be underestimated.

First, though, Spurs must see off the competition for his signature and pay what Ajax demand. The deal, according to reports, could involve an initial fee of £27million that comes closer to £40million depending on the player’s appearances and achievements.

Considering the extravagant transfer fees being thrown around in today’s transfer market, as well as Premier League television revenue, Sánchez’s signing would be relatively insignificant for Tottenham. He would also fit their tactics, as well as their policy of signing youngsters with room to improve.