Davinson Sánchez is a man in demand.

According to Catalan daily Sport, the Ajax defender is both a Barcelona and Chelsea transfer target.

They report that the Colombian centre-back’s representatives have travelled to Amsterdam to discuss the 20-year-old’s future with staff at his current club Ajax.

He was reportedly on Barcelona’s radar last summer, but decided to move to the Eredivisie in order to get more first team football, as the option from Barça would have seen him play for the B team.

It’s believed a bid of €25million (£21.4million), which wouldn’t be a problem for neither Barcelona nor Chelsea, would be enough to tempt Ajax into letting him go.

Who is Davinson Sánchez?

Despite his young age, Sánchez is already widely regarded as one of the finest central defenders in Dutch football, which perhaps not a surprise as Chelsea and Barcelona are reportedly targeting him.

However, it was in his home country of Colombia, where he first made his name, with Atlético Nacional, making his debut for the club in October 2013 at just 17.

It did, however, take another three seasons for the youngster to establish himself in the first team.

But 2016 was an impressive campaign for both player and club, with Sánchez helping Atlético Nacional to see off the likes of Peñarol, Rosario Central and São Paulo on their way to victory in the Copa Libertadores, being crowned continental champions for the second time in their history.

And it was during this impressive run that the rising star attracted interest from some of European’s finest, but as we mentioned above, he chose to join Ajax to get regular, competitive, top-level football, rather than sitting on the bench, or in the youth setup, at Barcelona.

That move has definitely paid off.

Ajax’s ability to scout and nurture talent is legendary.

Not only do they have a tendency to find the game’s next superstars, but they are also more than adept at developing individuals and setting them up for moves to more reputable leagues.

The Dutch giants’ focus is on creating total footballers – players able to operate well in all phases of the game, with the versatility to take on multiple different positions if need be – has been successful for many years, and their latest crop looks just as exciting as previous generations.

Tottenham Hotspur trio Christian Eriksen, Jan Vertonghen and Toby Alderweireld and Manchester United’s Daley Blind all came through the Ajax academy, while others such as Barcelona striker Luis Suárez benefited greatly from the Amsterdam side’s teachings during time spent with the club during the formative stages of their careers.

This season, skilful 19-year-old forward Kasper Dolberg, pacey 17-year-old winger Justin Kluivert and 17-year-old centre-back Matthijs de Ligt have all broken through with the intention of emulating their famous predecessors.

But Sánchez has arguably been the pick of the bunch.

And that was underlined with him winning the club’s Player of the Season award in his maiden campaign with the club.

He’s picked up plenty of plaudits too.

Captain saying: “He is a beast. I understand why he has been associated with top clubs. He has the stature, the power.”

Ruud Gullit has compared him to a defensive legend.

“There is a danger of a quick departure as Sanchez displays himself so impressively on the European stage,” he wrote about in De Telegraaf.

“Jaap Stam was the last Ajax player with such defensive qualities.”

“I am a spirited defender who likes to have the ball at his feet. That's one of my strengths,” Sánchez himself said.

“In South America, Ajax is known as the pathway to a rewarding career in Europe. I just got here, I want to be of great value to the club before I take the next step.”

And he definitely does like to have the ball at his feet – no other playing in the Dutch top flight has attempted more passes than Sánchez’s 2270, and if he keeps on impressing, that next step he mentions may come sooner rather than later.

How does Sánchez compare? 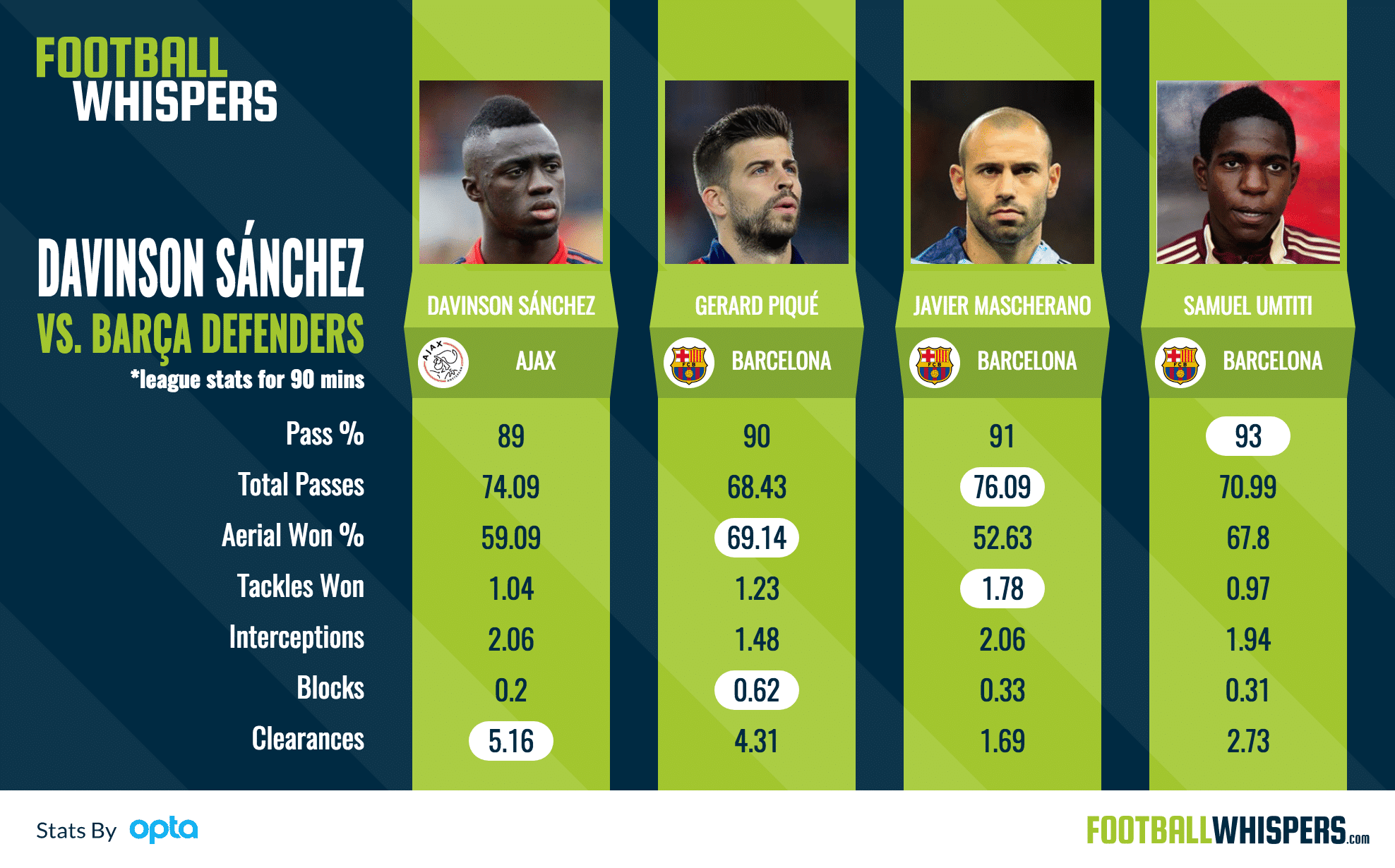 If you look at him compared to Barcelona’s three main defence options – Gerard Piqué, Javier Mascherano and Samuel Umtiti, he doesn’t come out too badly.

For him to have 89 per cent pass accuracy and be at the bottom of the pile, it’s mad.

It shows he is more than ready for Barça’s way of football though.

His rate of 59.09 per cent in terms of winning aerial duels is better than Mascherano as well.

At 20, he’s got room to improve and could well be seeing slightly closer stats to the Barcelona players should he move to the Camp Nou.

And actually if you compare his stats to the Chelsea first-choice defenders – César Azpilicueta, David Luiz and Gary Cahill – Sánchez’s ability shines through in a different way.

Where he led the way in terms of clearances and interceptions per 90 minutes, he’s beaten by Luiz – 5.34 and 2.07 respectively – if you compare him to the Blues’ back line.

But as mentioned above, the Colombian’s passing is a big plus of his game, and you can see that compared to Chelsea’s defence. 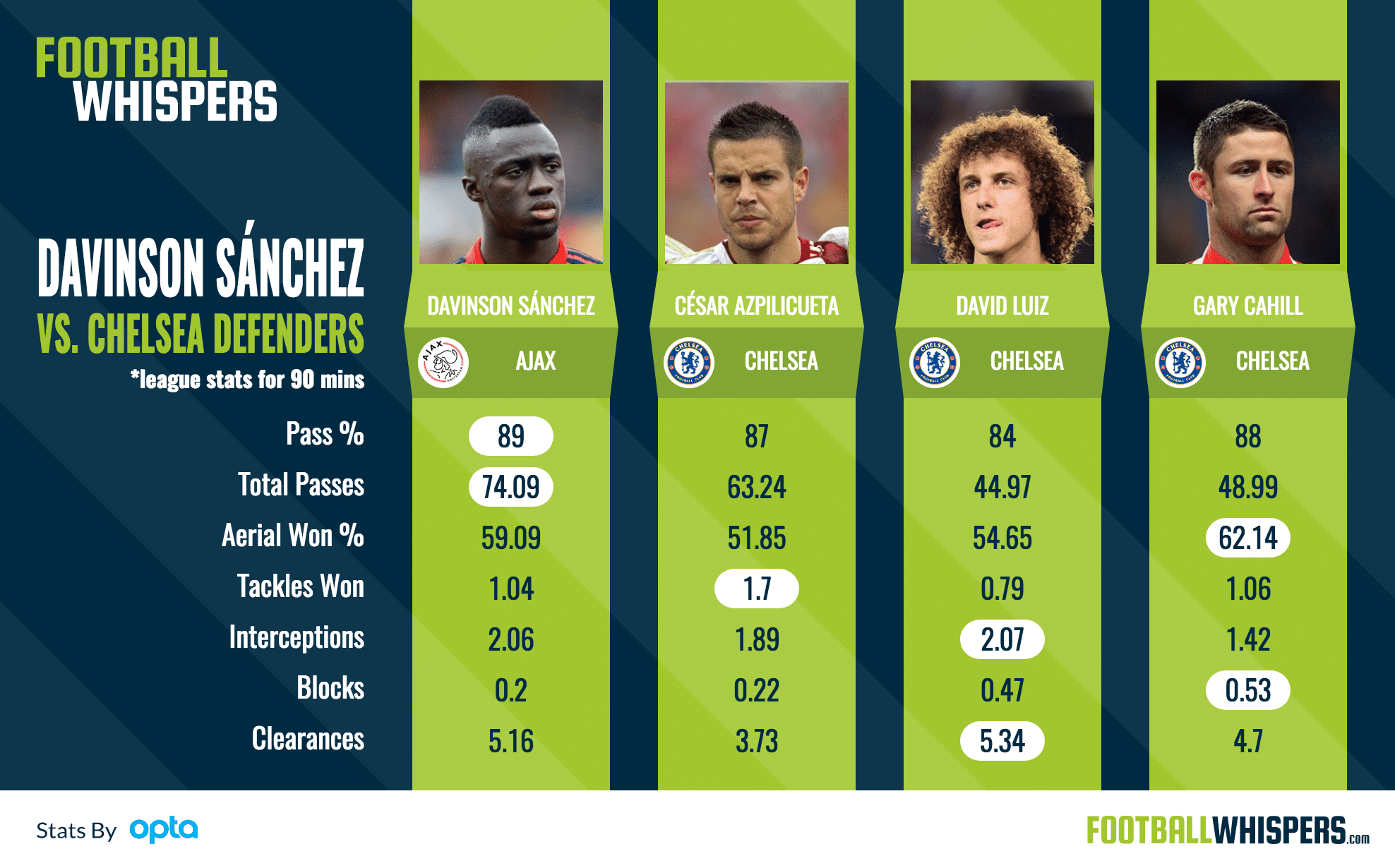 The passing accuracy of Sánchez of 89 per cent is higher than Azpilicueta’s 87 per cent, Luiz’s 84 per cent and Cahill’s 88 per cent.

And none of them come close to making 74.09 passes per 90 minutes – Azpilicueta is the player who makes the second most out of the quartet with 63.24.

The fact that he wins in different categories when compared to both Chelsea and Barcelona defenders just underlines the different ways the clubs play but also that he is a very good all round defender.

His next move will depend on him.

With John Terry leaving Chelsea, they will obviously be in the market for a defender, but you have to remember he wasn’t a first choice this season.

Mascherano is no longer a guaranteed starter at Barça and while Umtiti may be the man to partner Piqué, Sánchez may fancy being able to take his place.

The Colombian is likely to have many suitors and he has the ability to decide where he thinks suits him and his career path best.