Good things come to those who wait, and Ben Davies has waited. Since joining Tottenham Hotspur from Swansea City in July 2014, the Wales international has spent much of his life on the bench.

He has been made to bide his time as Danny Rose’s understudy, but while the England left-back has been out with a long-term injury, Davies has excelled.

On the opposite flank, Kieran Trippier has been promoted to Mauricio Pochettino’s first-choice right-back following Kyle Walker’s move to Manchester City and, along with Davies, is expected to continue to implement his manager’s vision of pushing full-backs high up the pitch and contribute to attacks.

Davis will retain his place for Wednesday night’s mouth-watering Champions League clash with Borussia Dortmund, and should he emulate his rampaging performances of late, it will complete an impressive turnaround from this point last season. Deputising for Rose in last season's Champions League against Monaco, Davies was culpable as he failed to stop Bernardo Silva for the opener before losing a tussle with Radamel Falcao in the build-up to the second.

As Rose impressed with a series of displays characterised by bombing runs and solid defensive work, the Spurs fans began to turn on Davies, with many proclaiming that he simply wasn’t at the same level as his teammate. Having conducted himself impressively at Euro 2016 with Wales, it came as a blow.

However, he has dug deep and continued to work hard under Pochettino – and is beginning to reap the rewards for his perseverance. In the 3-0 win at Everton on Saturday, Davies was outstanding, a constant threat on the left which the Toffees found difficult to contain.

Operating with a healthy dose of confidence, the 24-year-old’s runs from the left wing-back position were a constant feature of Spurs’ play. They were effective, too, as Davies whipped ten crosses into the Everton penalty area to give the home side’s defence plenty of headaches.

It was Davies’ pinpoint cross that found Harry Kane to make it 3-0 on Saturday, a snapshot of the Welshman’s growing influence in the team. Taking up an advanced position on the left, Davies received the ball from Kane.

Instantly spotting the striker’s darting run to the near post, he whipped a cross straight onto Kane’s boot for him to convert past Jordan Pickford for the second time in the match and wrap up a comprehensive victory.

Davies also had a hand in the second when his well-struck first-time shot on the end of Dele Alli’s deep cross forced Pickford to parry into Christian Eriksen’s path. Once again, Davies showed the confidence to bomb into the box and even have a shot.

Whereas against Monaco last season he looked at times as though he was playing with his boots on the wrong feet, he is becoming a key influence on this Spurs side as they begin to play their way into form.

In fact, although Spurs boast the creative talents of Alli and Eriksen, Davies has created the most chances this season with 12, highlighting his productivity down the left. But, while Kane attracted much of the praise on Match of the Day thanks to hitting a century of goals for Spurs before a section of analysis devoted to Eriksen’s fine form, Davies didn’t feature much in the discussion.

Ultimately that doesn’t matter, though, as his excellent display will not have gone unnoticed by his manager.

As a matter of fact, the BBC is apparently still getting themselves acquainted with Davies, judging by the below screenshot. Continue in the same vein and they won’t have trouble remembering his first name for much longer. 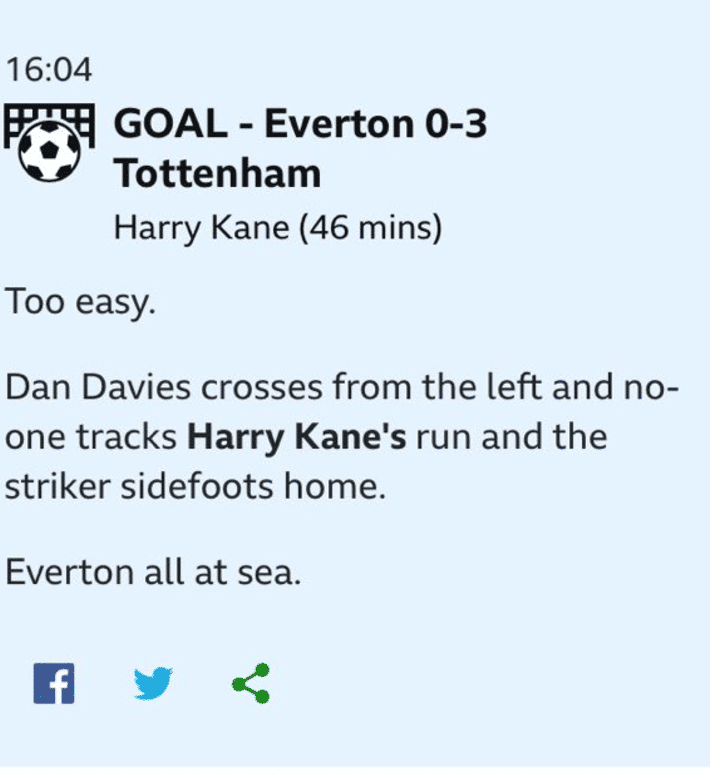 Davies’ stats stack up impressively compared to his contemporaries. Pitting him against Rose, Walker and Trippier, Davies averages the most key passes, the most chances created and the highest pass completion rate.

Ben Davies has created more chances (12) than any other Spurs player in the Premier League this season.

Giving his manager a headache. pic.twitter.com/sPtB8pPJcz

Growing up, Davies tried to model his game after Roberto Carlos and Leighton Baines and, although he isn’t blessed with the Brazilian’s pace or the Everton man’s brilliance from dead-ball situations, he is undoubtedly becoming one of the league’s fastest-improving players.

As previously mentioned, Davies doesn’t possess that same electric burst acceleration to fly past opponents that makes Rose such a threat, but he offers attacking menace in a different way.

Whereas Rose is more likely to fly past challenges and get to the byline, Davies uses his vision and technique to spot a run and make a key pass. They are different approaches and both have their merits.

There are still many Tottenham fans who prefer Rose as his consistency under Pochettino has led many to declare him the best left-back in the Premier League.

However, while Davies initially struggled to step out of Rose’s shadow, his improvement of late has certainly given supporters something to think about. It also gives Pochettino the kind of selection headache managers secretly thrive on: having two excellent options in the same position.

Davies’ progression fits nicely into Pochettino’s plan for the season. Although he can’t match Rose over ten yards, he can still be a key attacking weapon for Spurs and, with Trippier, Kyle Walkers-Peters and new signing Serge Aurier also options at full-back, it’s fair to say that Spurs possess strength in depth in that area.

Sure, Davies’ start to the season has been impressive, but his performances will be more closely scrutinised when Spurs come up against more formidable opponents than a strangely feeble Everton.

Indeed, the visit of Dortmund to Wembley on Wednesday will certainly provide a measure of how far he has come since that night to forget against Monaco, especially if he finds himself in a one-on-one with Pierre-Emerick Aubameyang or Christian Pulisic.