The PFA Player of the Year shortlist will always attract criticism. Selecting six players from a larger pool who have performed impressively throughout any given season is a tough task. If football is a game of opinions, it stands to reason that different people will have varying views about who should make the cut each campaign.

Harry Kane were the half-dozen names chosen for this year’s list. In a way, it is difficult to argue against each one’s presence.

Lukaku is the Premier League’s top scorer despite playing for a club outside the top six; Sánchez has at times carried Arsenal, scoring 19 goals and providing nine assists; Ibrahimović's 17 strikes have been of huge importance to Manchester United; Kante’s energy and industry in midfield looks set to carry him to a second consecutive Premier League title; Hazard, directly involved in 19 Chelsea goals, has been the probable champions’ star man; and Kane has once again broken the 20-goal barrier despite missing eight games through injury.

Best of the rest

Yet there are others who could make a strong case that they should be among the nominees for the award. Dele Alli, who will almost certainly scoop the Young Player of the Year prize, has taken his game to another level this season.

Sadio Mané has been instrumental to Liverpool’s top-four push – his importance was particularly noticeable during his time in Gabon for the Africa Cup of Nations in January – while Diego Costa and David Luiz have also been essential to Antonio Conte’s Chelsea, despite their struggles in the last few weeks.

Perhaps, though, it is David Silva who should feel most hard done by at not being among the six contenders. There was some talk prior to Pep Guardiola’s arrival at Manchester City that Silva could be one of the players moved on because of his advancing years. That despite the former Barcelona boss admitting he nearly brought Silva to the Camp Nou.

But the Spanish schemer has enjoyed yet another terrific season. Team-mate Kevin De Bruyne has more assists and Sergio Agüero, Leroy Sane, Raheem Sterling and Kelechi Iheanacho may have more goals, but Silva has once again been the most influential figure in City’s pursuit of silverware.

It is fair to say that Guardiola’s side have underachieved in the Premier League this term. A title challenge was widely expected in the Catalan’s first year at the helm. Instead, with six fixtures left to fulfil, City currently sit three places and 11 points behind leaders Chelsea.

Making a case for Silva

In recent seasons, the PFA Player of the Year award has regularly gone to someone who did not win the championship – Liverpool’s Luis Suárez triumphed in 2013/14, Tottenham Hotspur’s Gareth Bale came out on top the season before, as well as in 2010/11, Arsenal frontman Robin van Persie took home the prize in 2011/12 and Manchester United’s Wayne Rooney was voted into first place in 2010/11. But it has rarely been awarded to a member of a team who have failed to meet expectations. 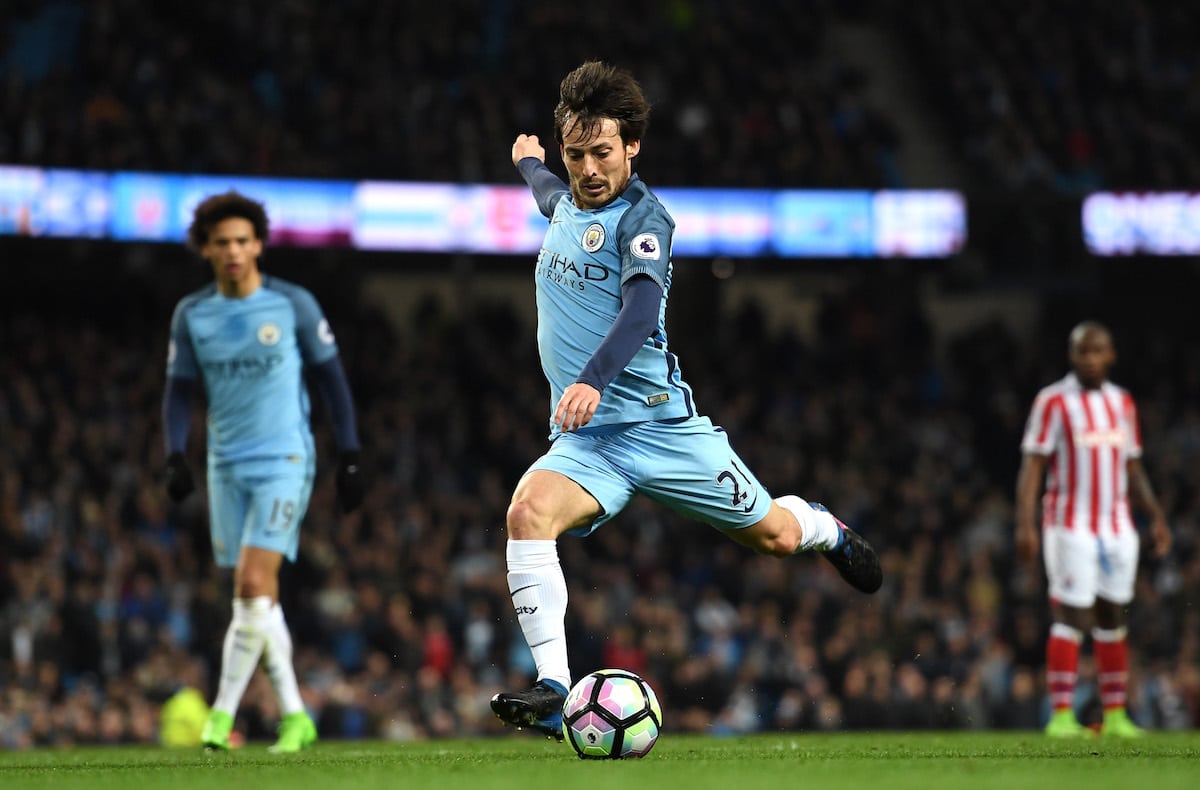 Nevertheless, the strength of many of Silva’s performances in 2016/17 means he merits inclusion. The 31-year-old was usually deployed as a No.10 or out wide with license to drift infield prior to Guardiola’s appointment at the Etihad Stadium. But this term he has spent much of his time in a deeper role. De Bruyne described himself and Silva as “free eights” earlier in the campaign with a single holding midfielder – at first Fernandinho, later Yaya Toure – stationed behind the duo. The two playmakers have been tasked with fashioning opportunities for their teammates from slightly withdrawn positions in what can loosely be described as a 4-1-4-1 formation.

In practice, Silva and De Bruyne still operate in the final third more often than not, particularly when City come up against weaker opponents. The former continues to dazzle with his tight control and tidy footwork in such congested advanced areas.

But he has also demonstrated his continued ability to control the flow of a game from slightly deeper in the pitch. He has provided seven assists to take his all-time Premier League tally to 64. But such a statistic has never told the full story when it comes to Silva, a prolific creator who frequently provides the pass before the pass before the goal.

READ MORE: WHY FABIAN DELPH IS BETTER THAN YOU THINK

There is certainly an argument that Silva has not done quite enough to usurp one of Lukaku, Kane, Kanté, Hazard, Ibrahimović or Sánchez, yet the fact that he is not on the shortlist is, on one level, hardly surprising. Even after all this time, the former Valencia man remains curiously under-appreciated.

It is one thing not to win the overall PFA award but Silva has only once been included in the same organisation’s Team of the Year. This is partly because he comes across as a shy character – and perhaps, for that reason, he won't be offended by another snub. But it is primarily down to the fact that his style is more subtle – but no less effective or devastating – than many of his peers.

Kanté and Hazard are, understandably, the favourites to claim this season’s prize, and it is difficult to argue that neither man would deserve it. At the same time, though, it is a great shame that the contributions of Silva – one of the greatest players in Premier League history – have once again been overlooked.