Conqueror of Real Madrid, tormentor of Juventus, just 22 years old and one of the key creative forces behind Ajax's run to the last eight of the Champions League, David Neres' star is on the rise.

Continental success is a double-edged sword for clubs like Ajax these days; over-performing sides from outside of Europe's established major leagues are liable to be dismantled by the big-spending cabal of super-clubs.

The picking off of Ajax's best and brightest young stars has already begun, with Barcelona having sealed the €75million signing of Frenkie de Jong for next season. Now Neres, thanks to his flair, work-rate and big-game temperament, is becoming one of the most sought-after attackers in Europe.

Borussia Dortmund and Paris Saint-Germain have been credited with an interest in the Brazilian wide man of late, and now Merseyside rivals Liverpool and Everton are being linked with the £35million-rated Eredivisie standout. And with good reason.

Neres has been exceptional in the Champions League for Ajax this term, especially standing out in the knockout rounds. With an assist in the first leg and a goal in the return fixture at the Bernabéu, the São Paulo academy graduate was pivotal in Erik Ten Hag's side's take-down of reigning champions Real Madrid. 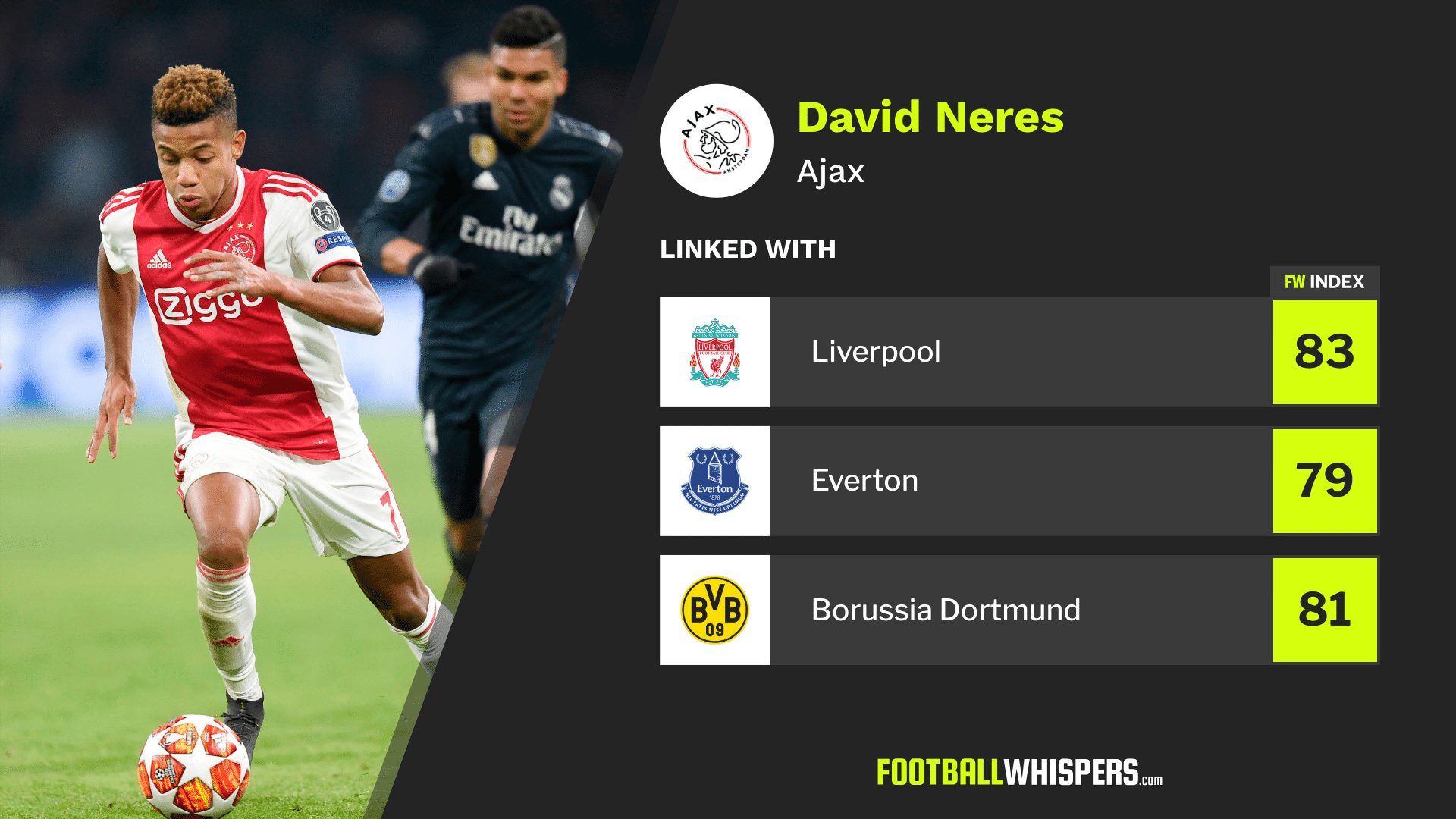 As he capped a superb display with the final goal in last month's 3-1 victory over title rivals PSV, uncatchable as he raced clear and unerring with his finish, Neres again proved himself to be a man for the big occasions.

And against Juventus at the Johan Cruyff ArenA on Wednesday night, after Ajax fell a goal behind against the run of play, it was Neres who equalised, scoring with a spectacular strike after breaking down the left flank.

Ajax signed Neres from São Paulo for around €12million in January 2017, and the initial plan of integrating the South American slowly, having him play with Jong Ajax (the club's youth side), was quickly abandoned when his talent and first-team readiness became impossible to ignore.

A first-team debut came the following month, and he was a regular starter by the beginning of the 2017/18 campaign. Neres finished his first season in the Netherlands with an impressive return of 14 goals and 13 assists from 32 all-competitions games, his combination of directness, goal threat and creativity alerting scouts around Europe.

And his fine form has continued this term, already on 12 goals and 15 assists for the season.

Neres played exclusively on the right wing throughout 2017/18, but a reshuffle of the Ajax attack – with Justin Kluivert sold to Roma last summer and Dušan Tadić introduced – he has predominantly featured on the left this season.

It is a credit to the Brazilian's versatility that he has remained as productive through the position shift.

The most eye-catching aspects of Neres' game are his dribbling and inventiveness in the final third, often weaving beyond multiple opponents and conjuring scoring chances with skill and subtlety.

His average of 2.27 successful take-ons per 90 minutes ranks him in the top 13 per cent of forwards in this season's Champions League, and only three attackers have completed more forward passes (56) than Neres in Europe's premier club competition this term.

It is perhaps Neres' commitment and discipline when out of possession that will have most impressed Liverpool and Everton scouts, though.

Pressing had long been a key tenet of the Ajax style, with the principles laid down by Rinus Michels and Johan Cruyff dictating that movement, interchanging of positions, high possession and co-ordinated closing-down should form the basis of the club's footballing philosophy.

And Neres, with his energy and work-rate, is the ideal attacker for such a system, evidenced by the fact he has made more attacking-third possession wins per 90 (2.41) than any other forward in the Champions League this season, and ranks in the top five per cent for tackles completed (seven).

On course for a first Eredivisie title in five years and aiming for a first Champions League semi-final appearance since 1997, Ajax have built a team capable of competing with the continent's elite based around a cast of supremely talented and hard-working young players.

De Jong and captain Matthijs De Ligt draw the most focus, but Neres has been a revelation since arriving in Amsterdam.