It raised eyebrows, for sure. Antonio Conte had spent the summer transfer window in pursuit of what he thought were defensive targets ideal for the philosophy he had brought to Chelsea. But while he was left frustrated, he was not left empty-handed.

In the final hours of the window, in came a familiar face. David Luiz, who had left Stamford Bridge two years earlier for Paris Saint-Germain in a then-record-breaking £50million deal, was back. And he didn't come cheap either, setting the Blues back a cool reported fee of £34million.

Desperation at its finest, right? It sure seemed so. “I must be honest, we have bought David Luiz because we need a centre-back,” Conte said at the time. “This transfer market was very difficult for us to reach our targets, but at the last minute, on the last day, there was this situation which was good for me and the club to improve the squad. For this reason, we bought David Luiz.”

One can certainly feel the disappointment in those words from the Italian, but he made every effort to see the glass as half full. “We invested in David, and I'm very happy. We took a player with a great personality, good technique, likes to play. I like to play football and I like defenders who like to play football,” he continued. “We know that David can improve in defensive situations, but it's good and I'm very happy he stays here. He's a good guy, a positive guy for the changing room. I'm very pleased for this.”

What was seen last summer as a desperate move, a consolation prize, is now looking like a nifty piece of business. Chelsea sit atop the Premier League with a 10-point cushion with 11 games to go. They have lost the joint fewest amount of games (three), have conceded the joint fewest goals (20), have made among the fewest defensive errors (eight), and see their goalkeeper, Thibaut Courtois, top the goalkeeping charts with 13 clean sheets so far. One key factor where these statistics are concerned is David Luiz. 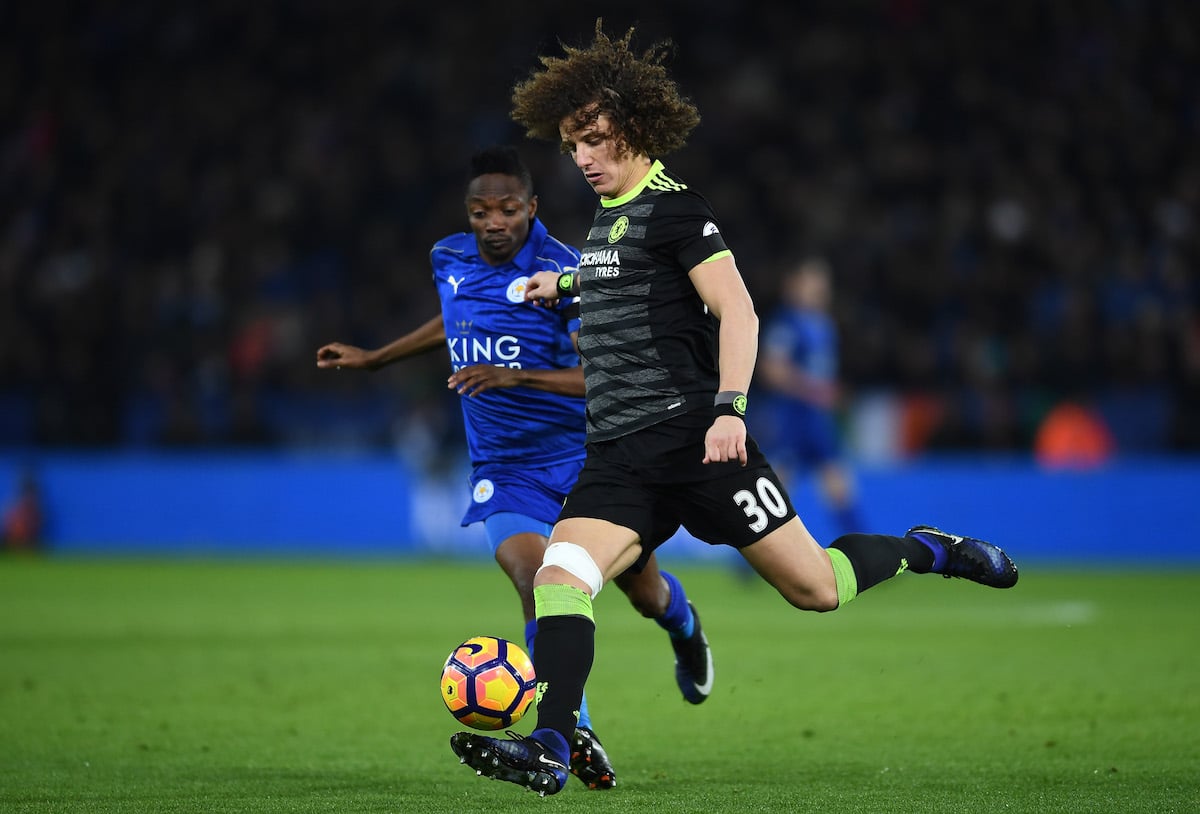 Heavily criticised as a result of his poor positioning and seemingly carefree gallivanting into advanced areas of the pitch during his first spell in England, drawing the memorable “kid with a PlayStation” quote out of famed pundit Gary Neville as a result, the Brazilian's reputation preceded him on his return to England. But he has answered back his critics most assuredly while inching closer and closer to doing what he said he was returning to do – win the Premier League.

“I have tried to improve and mature day by day,” Luiz told the Evening Standard last September. “When you try new things of course you improve, that's why I tried a new league.”

In his 23 league appearances to date, Luiz has made just one defensive error. Last season in France, he made four in 25 league appearances with one leading to a goal. Of course, playing in a settled and well-drilled back three system has helped greatly this season, but individually, the former Benfica centre-back has certainly showed that he has matured some and taken the ideas of his tactically inclined manager on board.

He has usually been deployed in the centre of Italian tactician's back three between Gary Cahill and the outstanding César Azpilicueta, where he sees a lot of the ball and has licence to bring it out of the defence in a manner like Leonardo Bonucci does at Conte's former club Juventus.

Luiz isn't quite as skilled as the Italian defender here, but he is comfortable enough to either keep things simple in the middle of the pitch or spread the ball out wide to the wing-backs, Marcos Alonso and Victor Moses, both of whom have also enjoyed impressive campaigns to date. 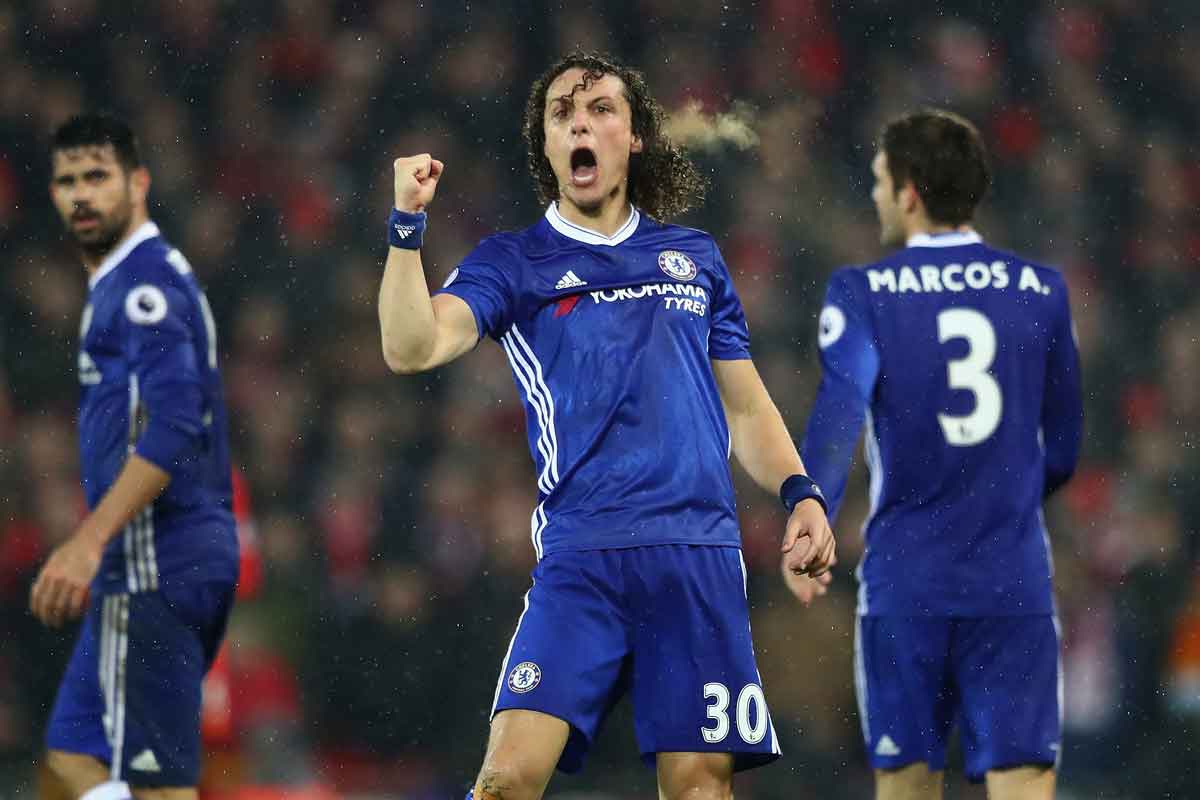 read more: ruben loftus-cheek needs to leave chelsea to save his career

Luiz is also comfortable striking the ball at goal from range, as he showed versus Liverpool with a memorable free-kick, his only goal to date.

When his team are on the back foot, although at times the old Luiz is seen diving into tackles and being overly physical, there has been some improvement where his decision-making is concerned. In fact, he has committed just 16 fouls this season, an average of less than one per game.

At 29 years of age, he is at that stage in his career where he should be at the peak of his powers. “I think that David Luiz is 29, a fantastic age for him to become one of the best defenders in the world. I'm seeing great commitment from him,” Conte went on to say upon signing the Brazilian.

That commitment, that drive, along with his experience and natural leadership qualities are also proving invaluable as Chelsea seek to hold on to their lead at the summit of the league.

“I've always said my shoulders are broad and I can take on that extra responsibility. I love it. I want it,” he said back in 2012 during his first spell at Chelsea, as the Blues prepared to vie for the FIFA Club World Cup.

“I prefer to take it on myself to help the other guys, who can then go out and play with their heads clear and calm. I know what it's taken to get me here at Chelsea. This was just another moment to be strong. One day, when I have my own kids, I'll tell them that even when their life is not easy, they can still do anything they want. That is the way to approach things.”

He still may not rank among the best defenders in the world, but he is on the cusp of winning what would be a third consecutive league title. One day, when he has his own kids, he can tell them about that too.

Would Aleix Vidal Be A Good Signing For Chelsea?