He described Dejan Lovren‘s performance in a 4-1 defeat to Tottenham Hotspur at Wembley as a lesson in the “art of un-defending.”

A year on, the same could be said for David Luiz‘s hilariously inept peformance in a 3-1 defeat to Tottenham Hotspur at Wembley.

Chelsea may not have shipped quite as many goals as Liverpool but they, too, succumbed to Spurs' breathtaking speed and precision, the hard running of Son Heung-min, the craft of Christian Eriksen and the marskmanship of Harry Kane.

And Luiz, much like Lovren before him, looked lost on a battered Wembley turf, chasing shadows and kicking the air aimlessly; aghast, lost and hopelessly trapped in that nightmarish dimension that seems exclusive to haunted centre-backs.

Luiz seemed to forget himself against Spurs. With the home side already 1-0 up, Kane picked up the ball 30 yards out and turned. The England striker looked up and decided to go for it. Luiz, for reasons only he knew, inexplicably ducked out of the way. The ball flashed past Kepa Arrizabalaga and Chelsea were as good as done.

Of course, the key difference between Lovren and Luiz was that the Croatian was spared by Jürgen Klopp, who decided he'd seen enough after 31 minutes.

Maurizio Sarri, chewing furiously on his cigarette butt, wasn't as merciful, keeping Luiz on, almost like a kind of game of chicken, seeing if the defender dared to slip up so spectacularly once more.

He did. With 54 minutes gone, Son ghosted past Jorginho who, at times laboured as though he was going against one of those airport moving walkways. Already late to spot the danger, Luiz decided to do the opposite of help his struggling team-mate, charging over and waving his leg pathetically in the Korean's direction.

Son fired the ball into the far corner just a second later but Luiz, somehow, was already about 12 yards away from him.

Luiz was not alone. Sarri said post-match that he didn't like any of his players' performances.

Which was fair enough. Antonio Rüdiger, a pillar at the back during the first few months of the Italian's reign, struggled badly. So, too, did Jorginho, so often lauded for his metronomic qualities in mifield.

Then there was Álvaro Morata, whose curious tale at the Blues continued as he lolloped anonymously up top before Olivier Giroud replaced him in the 58th-minute.

Sarri may have an intriguing dilemma in how best to use N'Golo Kanté in the same system as Jorginho. But what should be of immediate concern to the former Napoli boss is how to return Luiz to something resembling credibility.

Because, while Luiz has shown flickers of good form this season, he remains a liability, especially in big games.

During the 2-2 draw with Romelu Lukaku, then jostled back into position only to misread Luke Shaw's cross and miss his header altogether. Kepa beat Juan Mata's shot away and the Spaniard's resulting cross was only half-cleared by Luiz.

Then, as United worked the ball back into the danger area, Luiz had seemingly stopped playing as Marcos Alonso lay clutching his leg on the floor.

For Martial's second, Luiz charged towards Mata, lost the 50-50 and was effectively out of the game as United scored again.

He remains as enigmatic as ever. Gary Neville famously remarked that he ran about the pitch as if controlled by a ten-year-old boy on his PlayStation.

In 2014, having won the FA Cup, Champions League and Europa League during his first spell at Chelsea, he joined Paris Saint-Germain in an eye-popping £50million deal, making him the world's most expensive defender at the time.

Just a few weeks later, PSG fans presumably threw quizzical looks at each other as they watched Luiz and Brazil's World Cup campaign descend into calamity, losing 7-1 to Germany in Belo Horizonte.

It left Luiz, Brazil's captain that night, in tears on the pitch.

But he did find peace in Paris. With PSG, he won back-to-back French titles and was named in the Ligue 1 Team of the Year in both of his seasons at the Parc des Princes.

He returned to Stamford Bridge and slotted seamlessly into Antonio Conte's 3-4-3. There, partnering Gary Cahill and Cásar Azpilicueta in defence, Luiz had the two things he's always needed; protection and freedom. With Cahill and Azpilicueta, two significantly more disicplined defensive heads, either side of him, Luiz was able to roam into midfield and showcase his passing range.

And when Chelsea defended, a formidable two-man barrier of Nemanja Matić and Kanté shielded the back three. Luiz, originally derided as a panic buy on transfer deadline day that summer, proved the perfect Conte defender. 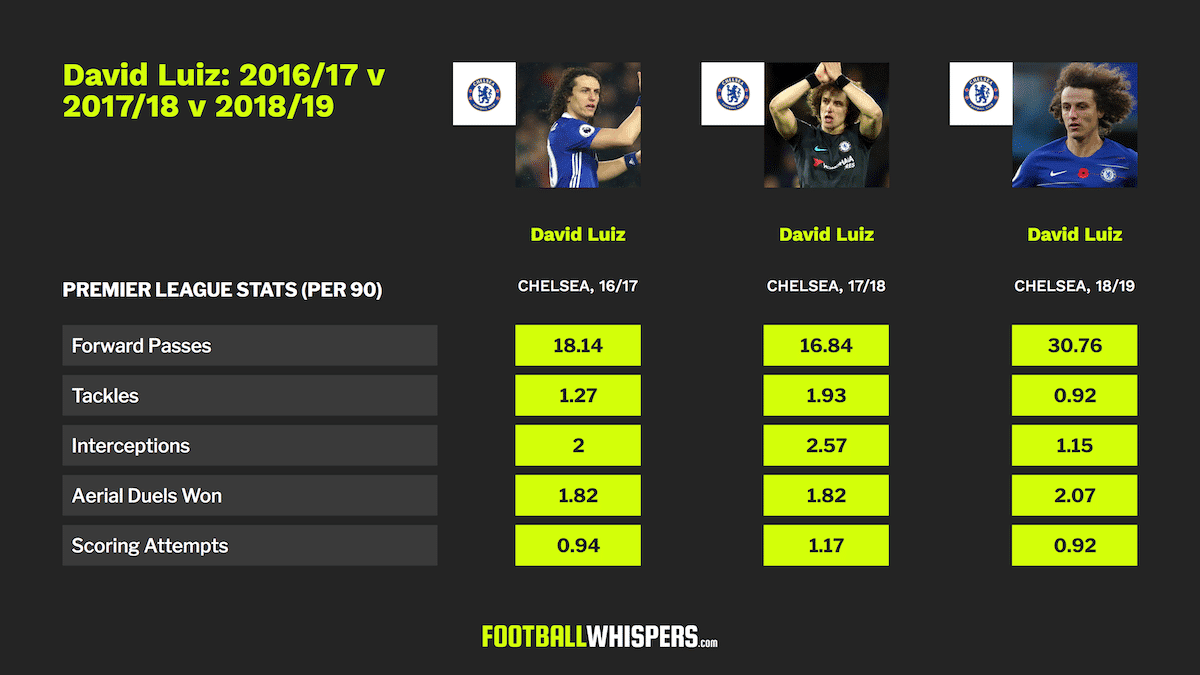 The problem is: Luiz does not suit playing in a back four and, with Kanté further up the pitch in Sarri's 4-3-3, the Brazilian has, at times, looked horribly exposed this season. Chelsea fans will say that it's been the usual mix of the good, the bad and the ugly. And when it's bad, it's really bad, almost enough to watch a football match through your fingers as though it was a horror film.

Sarri has not given any indication that he will stray from his beloved formula, leaving Luiz staring down the barrel of a long and possibly harrowing season.

It seems obvious that Andreas Christensen, who is yet to feature in the Premier League this season having established himself in the latter stages of Conte's reign, should be given a run in the team.

The Dane has been used in the Europa League and Carabao Cup this season but, with Luiz never too far away from ‘doing a Lovren', Sarri should think about promoting the 22-year-old to Premier League duty.

A back four with Luiz and Rüdiger, quite simply, isn't reliable enough to win Chelsea the title.