Chelsea are the most in form side in the Premier League right now. Since Antonio Conte opted to switch to his favoured formation of three/five at the back after the 3-0 defeat to Arsenal they haven’t conceded a goal. Six consecutive wins and six consecutive clean sheets have edged Conte’s side one point clear at the top of the table.

Conte won the manager of the month award yet he’s still not getting the credit he deserves for this miraculous turnaround. This isn’t simply sticking more players behind the ball as a way to clog up the middle as some passive aggressive members of the media have implied. Conte had a system in mind and he’s picked players to execute it. A midfield duo of Nemanja Matic and Ngolo Kante doesn’t scream creative but the pair have went about their business supporting the attack as and when needed. Victor Moses didn’t strike many as a wing-back but he’s excelled in that role and hasn’t shirked his defensive responsibilities. But perhaps Conte’s greatest achievement is getting the best out of £34 million man David Luiz.

When he resigned for the club in August he was a bit of a joke. Ligue 1 reporters suggested he returned to England an inferior player. The almost maverick-like centre-back had picked up some bad habits in France. In his first three games for Chelsea the club conceded 7 goals and the decision to bring him back looked like it had backfired.

Conte kept faith in the Brazilian and with the change in formation came a change in fortune for the 29-year-old. Conte’s system seemed to suit Luiz’s strengths. Almost like the Italian planned it all along. David Luiz was a throwback to the libero. A position that was a staple of some of the famous football teams of the past. It was a role that combined being the deepest of a three man defence with being a deep-lying playmaker. The hinge that turned defence into attack. Once portrayed as an outcast with no place in a top class defence It’s here that the unique Luiz has found his home in the Chelsea system. It maximises his strengths and hides his weaknesses. 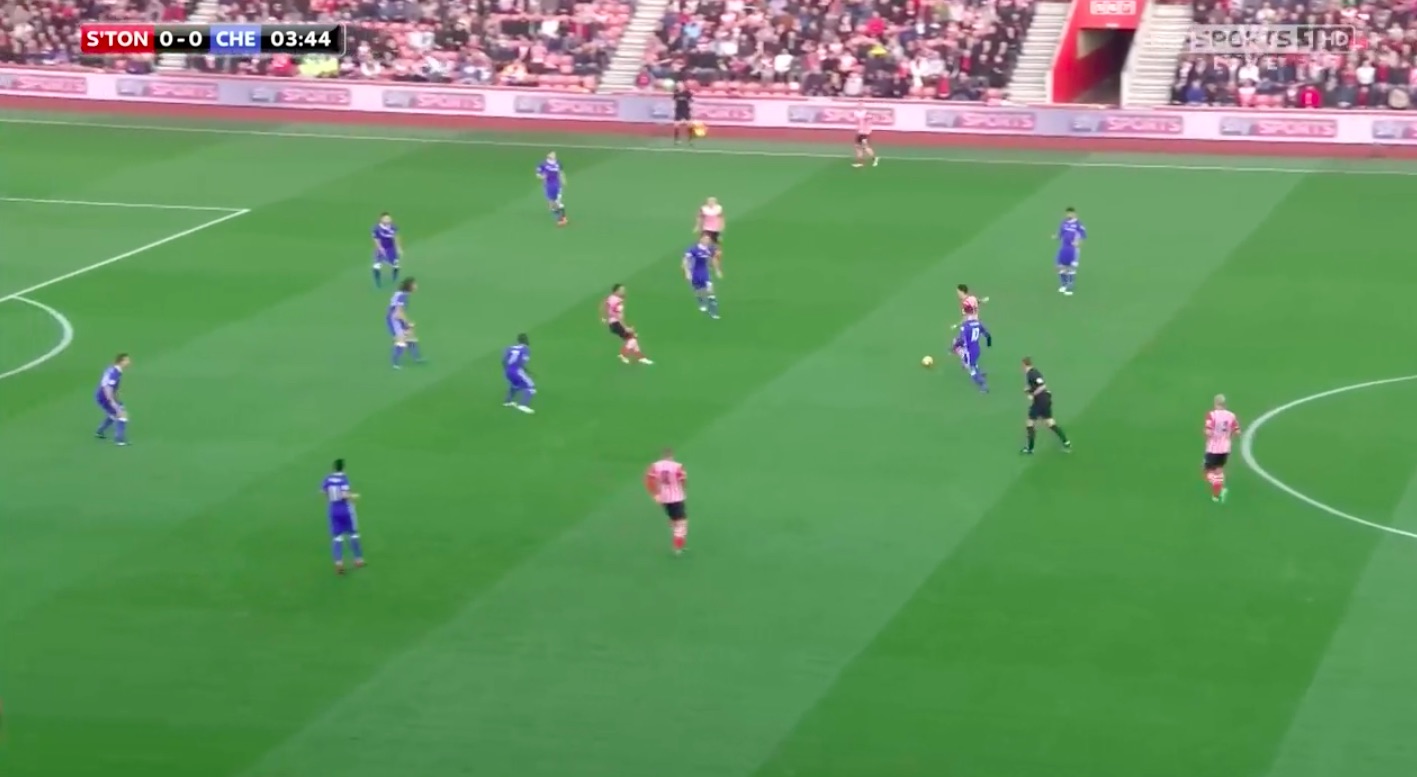 David Luiz has a tendency to push up in an attempt to intercept the ball. In a normal defence it’s that sort of proactive approach, when the rest of the team are reactive, which leads to Luiz leaving space in behind that the opposition can exploit. But in Conte’s new-look Chelsea Luiz is allowed to push up, like he does in the picture above against Southampton, to cut off passes and put pressure on the opposition. If the ball is played to the Soton man ahead of Luiz he’s only got one to play – backwards – yet if he manages to turn Luiz both Cahill and Azpilicueta are covering. He’s no longer exposed and he’s able to play his natural game. 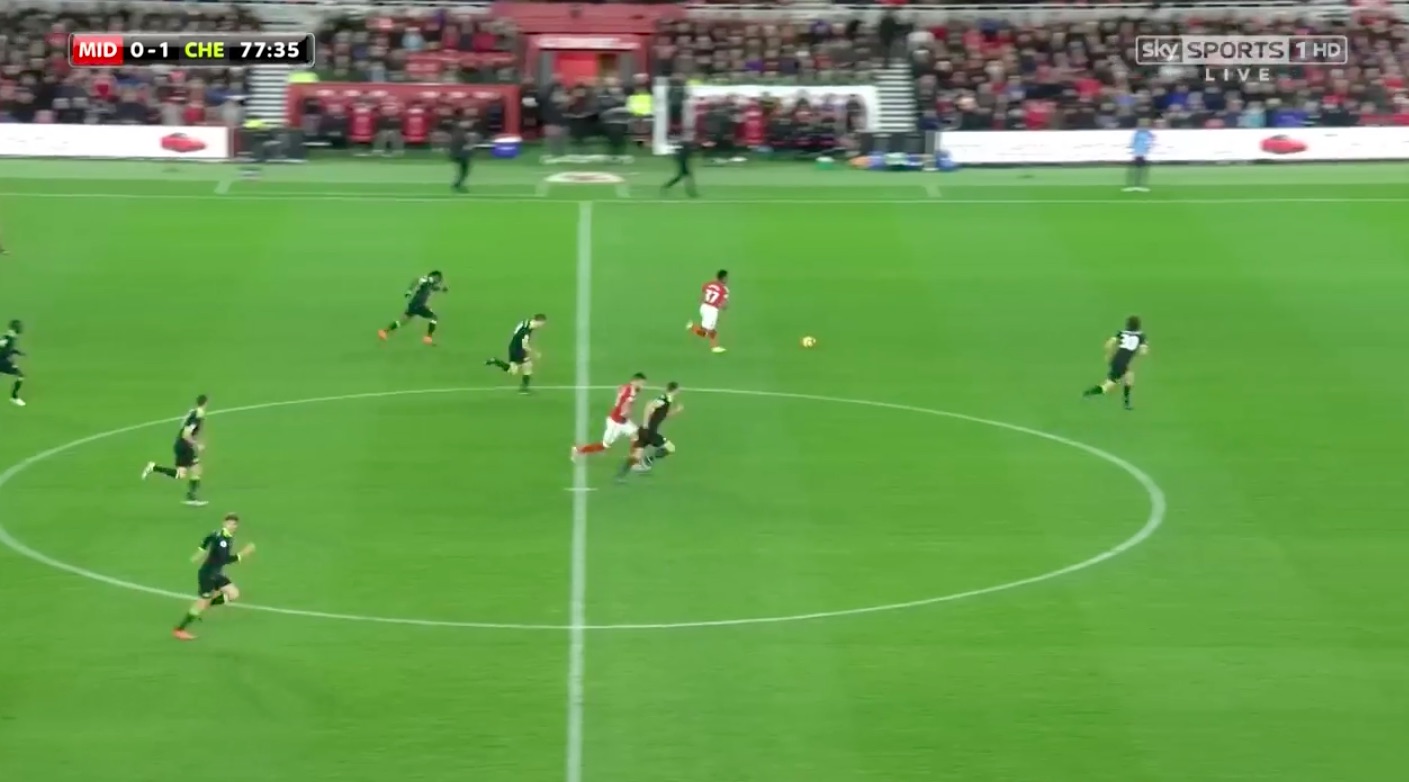 In this picture Luiz is shown as the deepest defender. Some may suggest it’s risky having a reckless player like Luiz as your last man but why wouldn’t you want your ball-playing defender regaining possession in that position with his team mates ahead of him with the chance to counter the counter? It shows the trust Conte has in Luiz too. 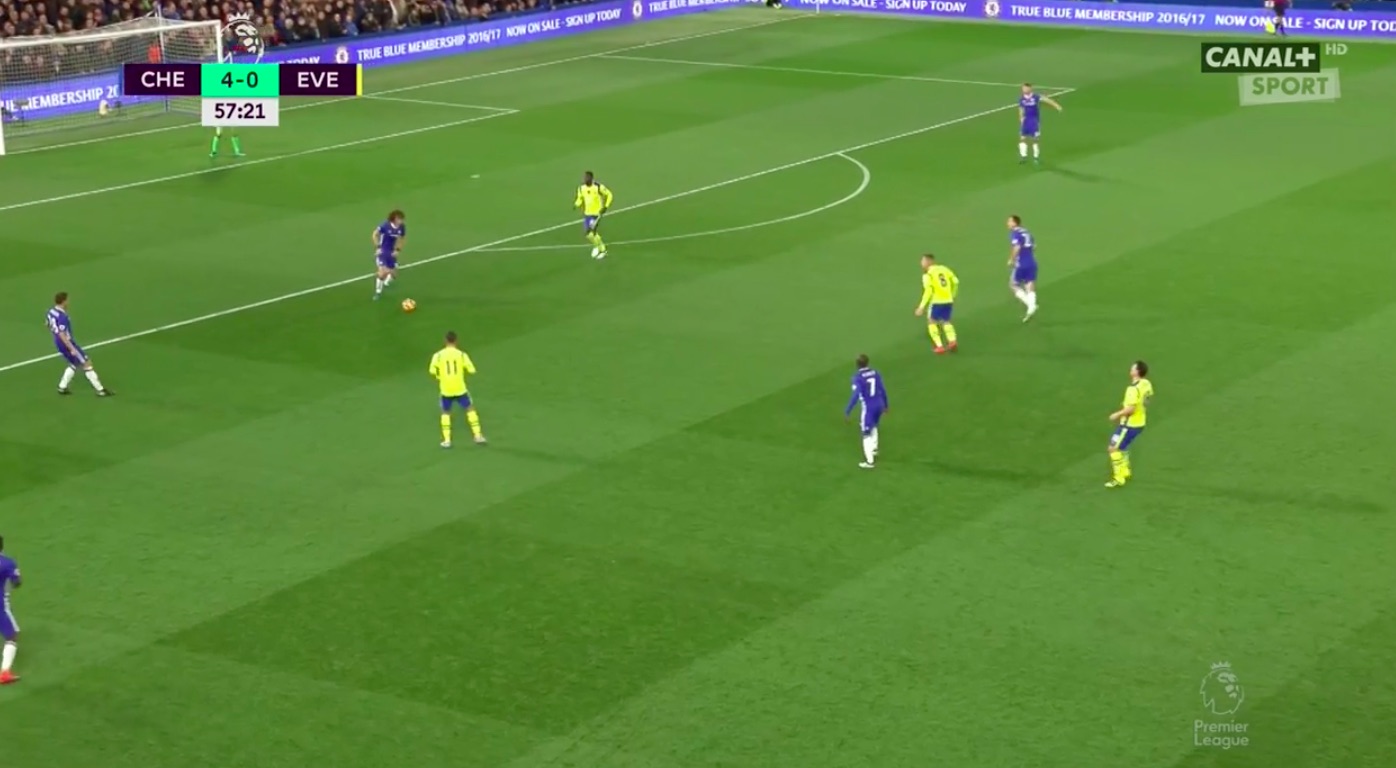 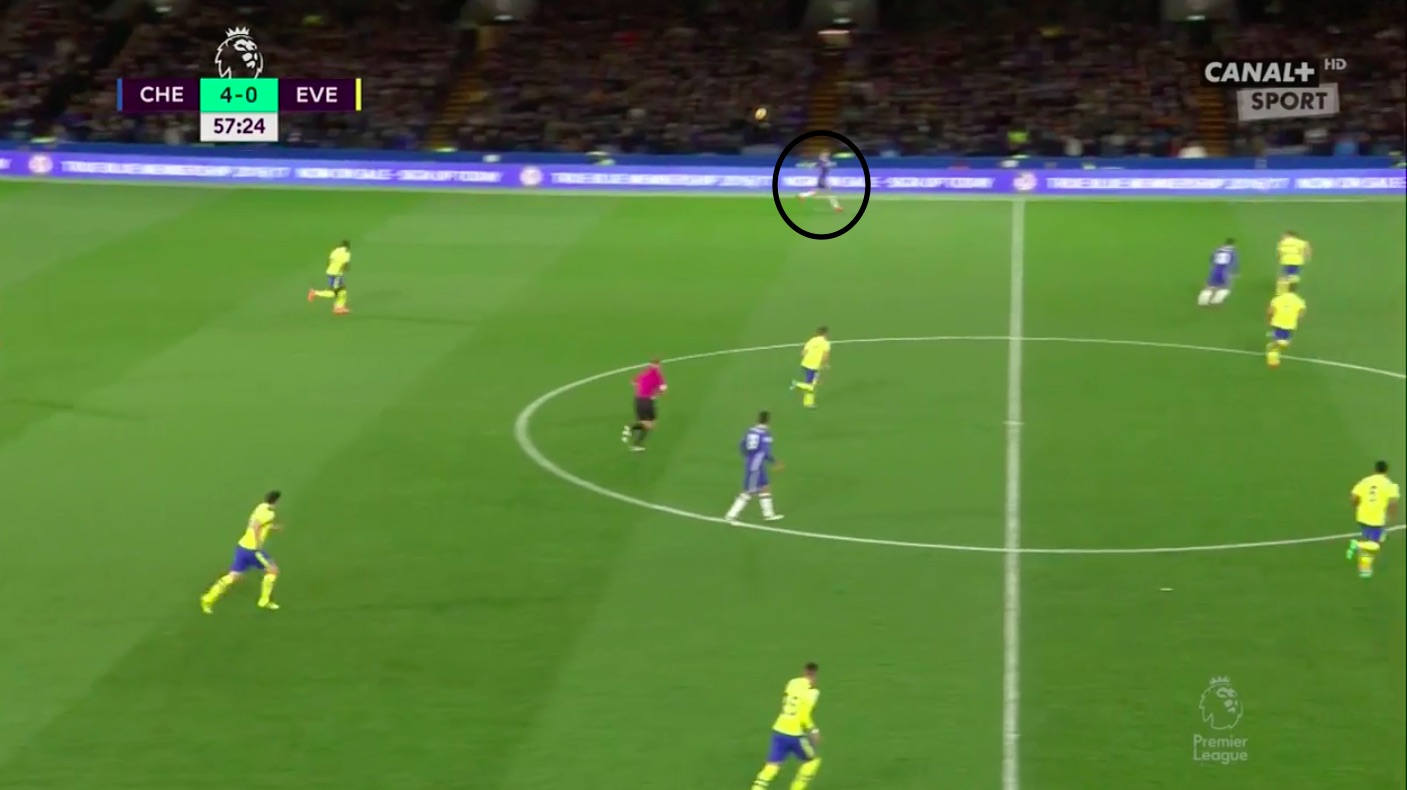 Having Luiz in that position not only helps the player but it helps the team. In the first picture Everton are looking to press high up the pitch and force Chelsea to go long. Costa is a bit of a brute in the air but even he’d struggle against three Everton centre-backs unless it was a good ball. However, Luiz showcases not only his vision but also his calmness as he’s able to see a pass and execute it.The ball reaches Alonso, circled in black, and he has acres of space to run into which get’s Chelsea on the attack and takes a fair few Everton players who had pressed up out of the game.

There’s a huge difference between clearing the ball and picking out a pass. Many centre-backs would do the former in that situation whereas Luiz does the latter. 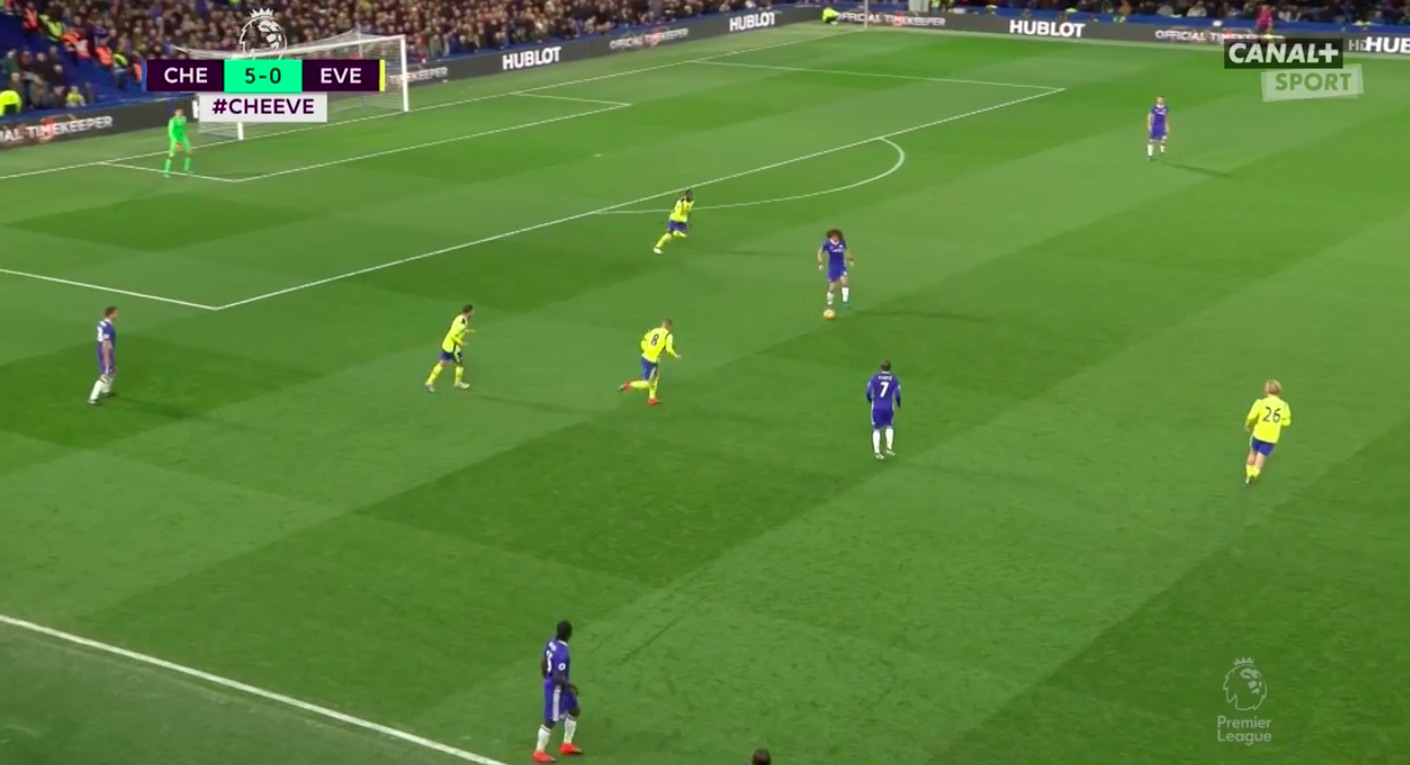 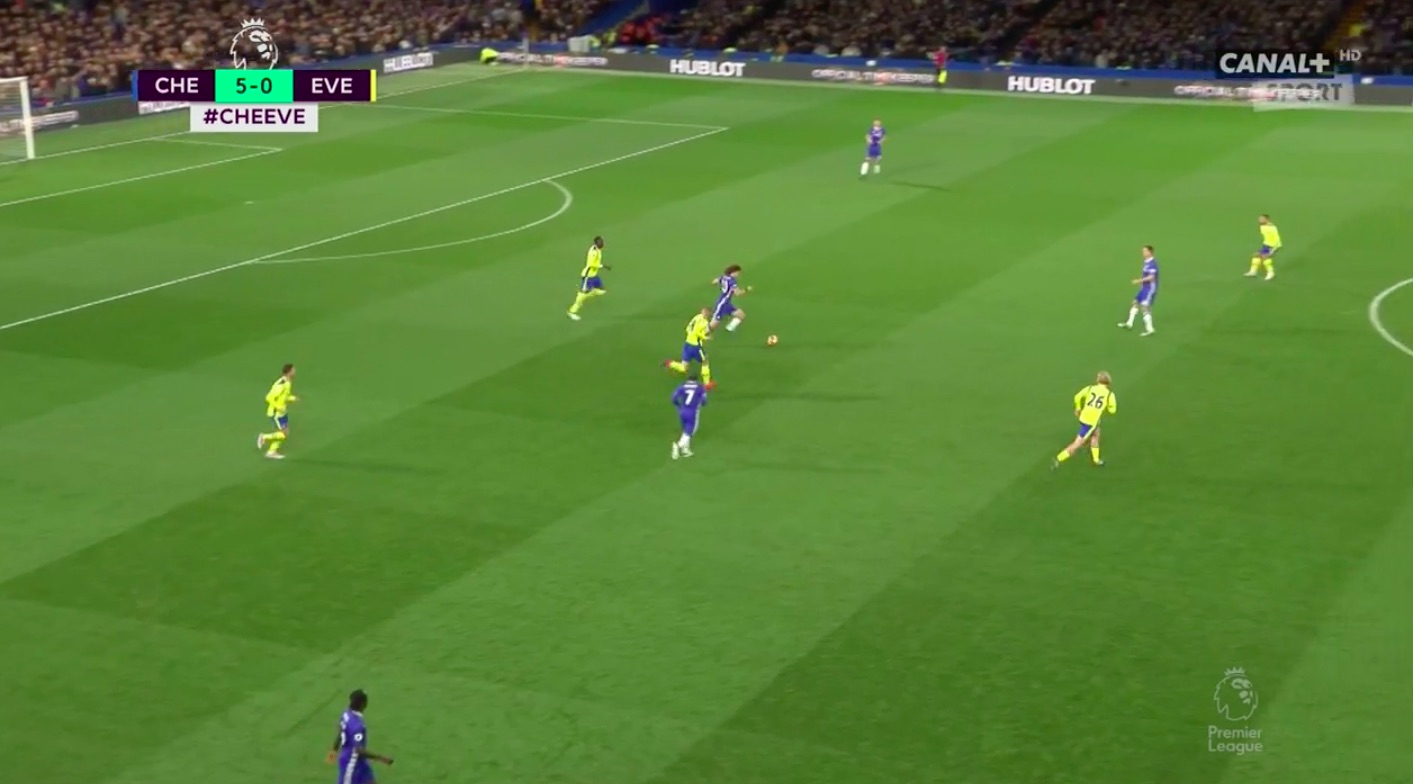 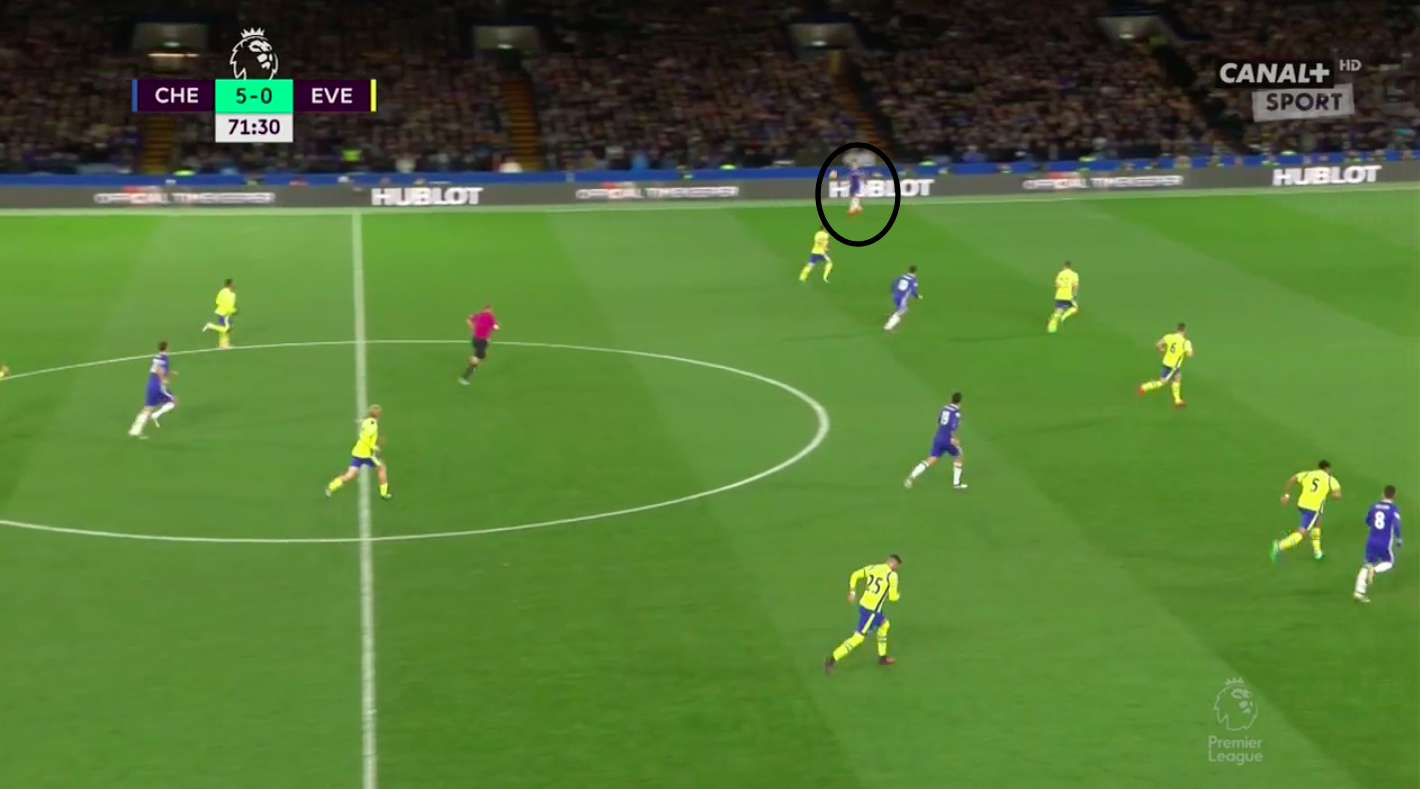 Once again Everton look to press high up. In the first picture Luiz could play a simple all to Kante but with so many Everton players around there’s a risk that they manage to turn possession over. Instead Luiz shows his calmness when in possession to turn into space, carry the ball forward and pick out yet another pass. In the third picture the ball is with the player circled in black and it’s 3 vs 3 centrally for Chelsea all because of Luiz’s ability to turn defence into attack.

David Luiz is no longer a joke. He’s a crucial part of Conte’s defensive unit which may play a huge role in them challenging for the title. Chelsea are in the market for another centre-back in January according to reports but in this kind of form it’s unlikely it’s to replace Luiz. He’s earned that starting role and he’s repaid the faith in Conte.