Young players, especially those making the step up from the Championship, often require time to adapt to the Premier League.

After all, opponents are better, the games are quicker and the expectations are intense, to say the least.

But David Brooks, Bournemouth's little dynamo, has taken to top-flight football with consummate ease following his £11.5million move from Sheffield United.  Although that fee seemed considerable for a player with one good season of second-tier football under his belt, he's already justifying the outlay.

Having sealed the Wales international's signature, Cherries boss Eddie Howe said: “We've seen enough to suggest he could be outstanding at this level.

“He is technically very good, has huge potential and will fit our philosophy in terms of how we want to play.”

Howe's words have proved prophetic. Not only has Brooks offered indisputable evidence that he is on the highway to superstardom, but his seamless integration into the first-team at the Vitality Stadium means he could prove one of the signings of the season.

Much like Jefferson Lerma, who has added balance and tactical acuity to the midfield, Brooks has instantly improved this Bournemouth side.

His movement, creativity and understanding with his teammates has been a major factor in the Cherries' head-turning start to the season. 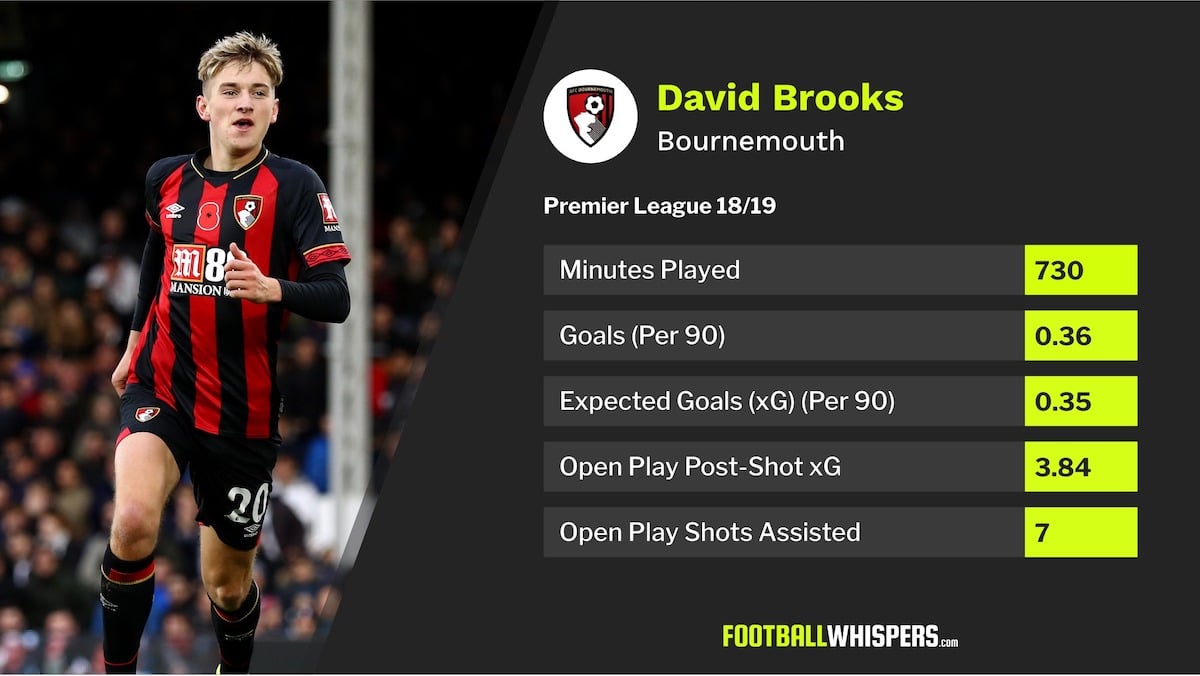 Only two players have managed more accurate through balls than his three this season. While that does not seem like a lot, each pass created a chance for his teammates. But Howe wants players like Brooks and Ryan Fraser to be adventurous and daring with their passing. Their speed of thought and agility allows them to change the game in an instant.

Of course, there have been numerous occasions in which Brooks has failed to find a colleague with a through ball but the fact that he is constantly looking to prise open the opponent's defence is chief among the reasons why Howe initially targeted him.

His three goals illustrate his ability to find space in the box, too, which is reflected in his open play xG of 2.9. Taking up promising positions appears to come naturally to him and will be a priceless commodity as Howe attempts to take this impressive Bournemouth machine to new heights.

Slight of build and remarkably fresh-faced, Brooks is the kind of player who might at one point get stopped at stadiums by security guards mistaking him for a mischevious fan.

Looks can be deceiving, though. Like Fraser, physically he doesn't amount to much – his height was the reason Manchester City released him – but, with the ball at his feet, he can be deadly.