By this point, if you're young, British and have shown promise, it'd be strange if you weren't linked with Manchester United.

Daniel James did enough to convince the club of his credentials, Aaron Wan-Bissaka is expected to join for a whopping £55million while they continue to chase Newcastle United‘s Sean Longstaff.

Now, the new baby-faced assassin is being chased by the original. Yes, according to reports, Ole Gunnar Solskjær is interested in signing Bournemouth winger David Brooks.

It's a transfer rumour completely out of the blue. Then again, given Brooks is 21, Welsh and is fresh off an impressive debut season at the Vitality Stadium, we perhaps shouldn't be shocked by United's supposed interest.

Brooks was an instant hit on the South Coast after joining from Sheffield United last summer. The versatile attacker nailed down his place under Eddie Howe, scoring seven goals and adding five assists in 30 appearances, 29 of which were starts.

A boyhood United fan, Brooks joined James Maddison in comfortably making the leap from Championship to Premier League last season. But while the Leicester City man looked like a readymade top-flight star, it was easy to dismiss the Welshman because of his slight build and cherubic face.

But as defenders soon found out, there was nothing adorable about him.

Comfortable operating out wide or as a No.10, Brooks was a standout performer for the Cherries during their early-season rise into sixth.

Born in Warrington, he decided to play his international football for Wales, the country of his mother's birth, having starred for the England Under-20s at the 2017 Toulon Tournament where he was named the Best Player.

Since then, his rise at club level has coincided with his emergence on the international scene. Handed his debut by Chris Coleman, Brooks has played an important part in Ryan Giggs' youthful set-up, featuring alongside the likes of Harry Wilson, Connor Roberts, Ethan Ampadu and United new boy James.

And it's easy to imagine Brooks terrorising defences alongside his international team-mate at Old Trafford. Last season, Howe used him mainly as an inverted right winger, where he was expected to cut inside and link up with Callum Wilson or Josh King.

Like Ryan Fraser on the opposite flank, Brooks has become a key creative outlet for Bournemouth, who lack a natural playmaker in the centre of the park. In 2018/19, he averaged 0.35 Big Chances created per 90, ranking him sixth for under-23 players who featured in more than 1,200 minutes.

He also averaged more fast breaks (seven) per 90 than any other midfielder, so it's easy to imagine him slotting into a United side that contains the searing pace of James and Marcus Rashford. 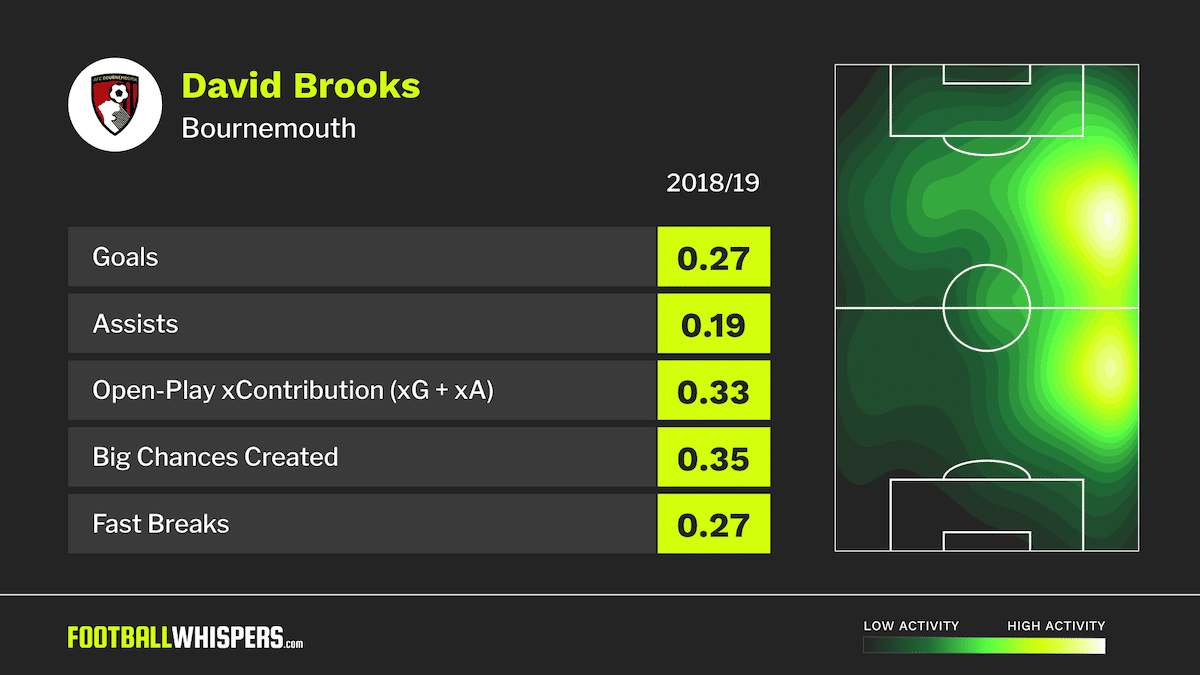 At United, Brooks could fit onto the right either in Solskjær's oft-used 4-3-3 or in the hole in the 4-3-1-2, which was seen regularly towards the end of the season. That position most naturally suits Juan Mata and, while the Spaniard has just signed a two-year extension at Old Trafford, he is not expected to be a weekly starter in the 2019/20 campaign.

Brooks would add a different dimension to United's attack. Although his base position is often out wide, he spots and utilises space in central areas as well as anyone at United. His ability to drift infield and open up defences – his 16 attempted through balls last term offer an insight into his penetrative passing – is certainly something that could benefit Rashford or Anthony Martial.

Cutting inside to wreak havoc on the opposition was supposed to be Alexis Sánchez‘s area of expertise but given the Chilean's dramatic fall from grace, it's time someone else stepped into that role.

Brooks to United is a tantalising prospect. He is young, talented and clearly has a big future in the Premier League. Like James, he is also being mentored at international level by Giggs, a legendary United winger who would, presumably, urge him to fulfil his dream and move to Old Trafford.

However, having already spent £18million on James and with an expected £55million outlay on Wan-Bissaka, another £50million – the asking price – for the Bournemouth man is likely to scare United off, especially considering the club's continued search for an elite centre-back.

James may have got his big move to United after one fine season at Swansea City, but for Brooks, a return to Manchester (he was let go by City for being ‘too small') is likely to come further down the line.