Before this week, Danny Welbeck’s biggest contribution to Watford was missing a sitter late in the Hornets’ 2016 FA Cup quarter-final win at Arsenal.

With the minutes counting down the ball broke loose in the’ penalty area. Leading 2-1, surely this was the moment the Premier League giants crushed the underdogs’ spirit? Alas, not. Welbeck swivelled and slashed his shot over the open goal. Cue relief in the Watford end.

This week the 42-time England international joined the Hornets on a three-year deal after his Arsenal contract expired at the end of June.

Volumes for the rapid progress the Hornets have made on and off the field since winning promotion four years ago, and volumes for Welbeck’s misfortunes since leaving Manchester United.

Louis van Gaal’s decision to allow the homegrown lad to leave Old Trafford was not popular. When Arsenal paid £16million for Welbeck in September 2014, it looked like a huge coup for the North Londoners.

But things did not work out for Welbeck. In five seasons with the Gunners, injuries limited him to just 46 Premier League starts. In fact, he only surpassed ten top-flight starts on two occasions – his first and penultimate seasons with Arsenal.

As a Gunner, Welbeck had spells in the treatment room forcing him to miss 11 games, 30 games, 29 games and 41 games; a total of 714 days lost to injury – very nearly two years.

Make no mistake, that is why Welbeck finds himself at Watford. But it’s a deal which could suit all parties if the Hornets’ medical team can get the 28-year-old right.

For a start, Welbeck’s versatility is a huge asset. Although he is relatively tall for a wide player at 6ft 1in, he was one of the first names on Roy Hodgson’s England team sheet, playing wide left in a 4-2-3-1 system.

His rarely seen combination of size, speed, aerial and technical ability made him a hybrid wide-targetman. Between 2012 and 2014, under the watchful eye of Hodgson, Welbeck won more than half of his England caps.

Not that the former Three Lions boss is Welbeck’s only advocate. The great Sir Alex Ferguson is another.

It was the legendary Scot who gave Welbeck his professional debut for the 20-time champions of England as one of several youngsters to break through from the academy – along with current Watford midfielder Tom Cleverley.

“Maybe he doesn't appreciate us moving him around in various positions and we've maybe overused that because he is young,” Ferguson said in 2013. “But his value to the club is there because I know he can do a job for me in any of those positions.

“It's a fantastic asset when you have a player who is as adaptable as that. But I think he will find his role through the middle once he gets that maturity and gets into a more consistent way of scoring.” 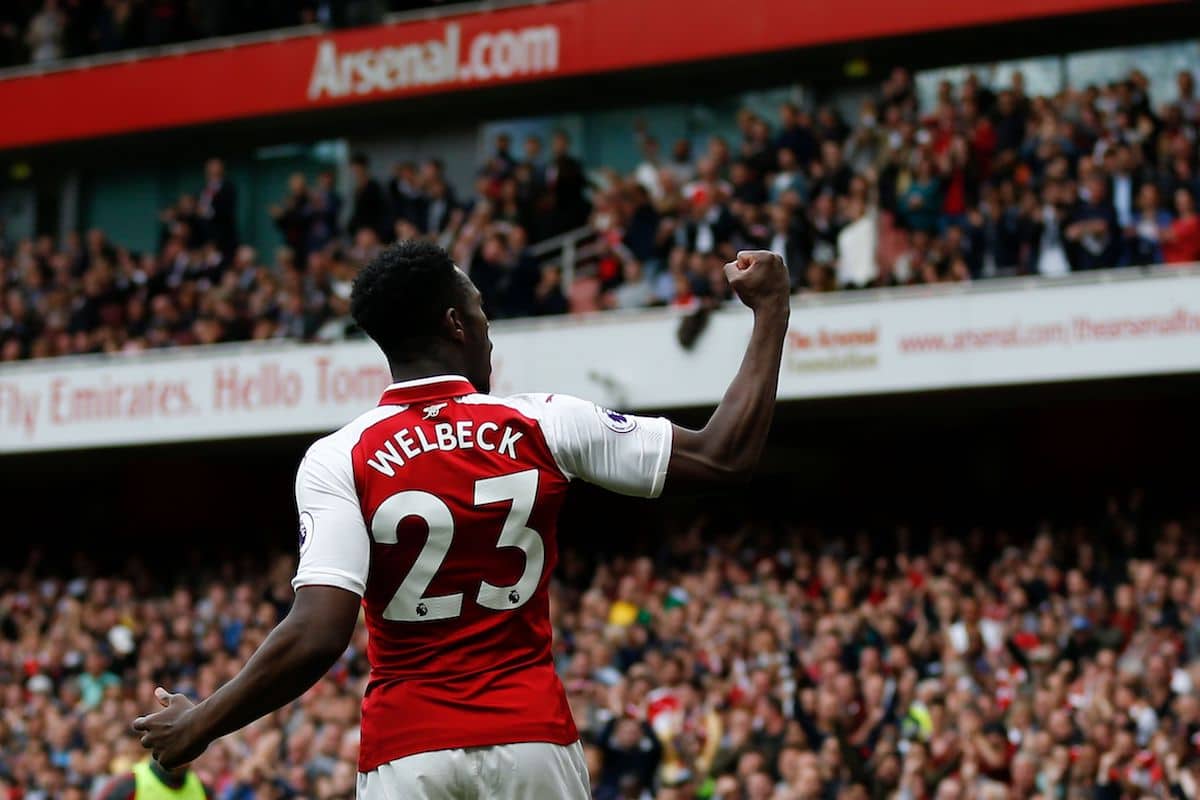 Ferguson appreciated Welbeck for his tireless running, work rate and ability to lead the press, closing down opposing players while in possession. And while that side of his game meant he was never prolific at Old Trafford – netting a seasonal best of 12 in 2011/12 – the Scot’s impact on his game can be seen ever now.

Respect between the two is mutual – Welbeck revealed in 2017 he is still in touch with his former boss and mentor.

“Ferguson was great with me,” Welbeck said. “He helped me a lot, pushed me through to the first team and helped me become a professional. He’s played a massive part in my life. He influenced the way I think, the way I am as a person is down to him.”

Welbeck never added the goals to his game Ferguson predicted. He managed just five Premier League strikes in 2017/18 at a rate of 0.37 per 90. For context, his expected goals ratio was 0.38 per 90, meaning he was almost scoring at the rate he should have been. 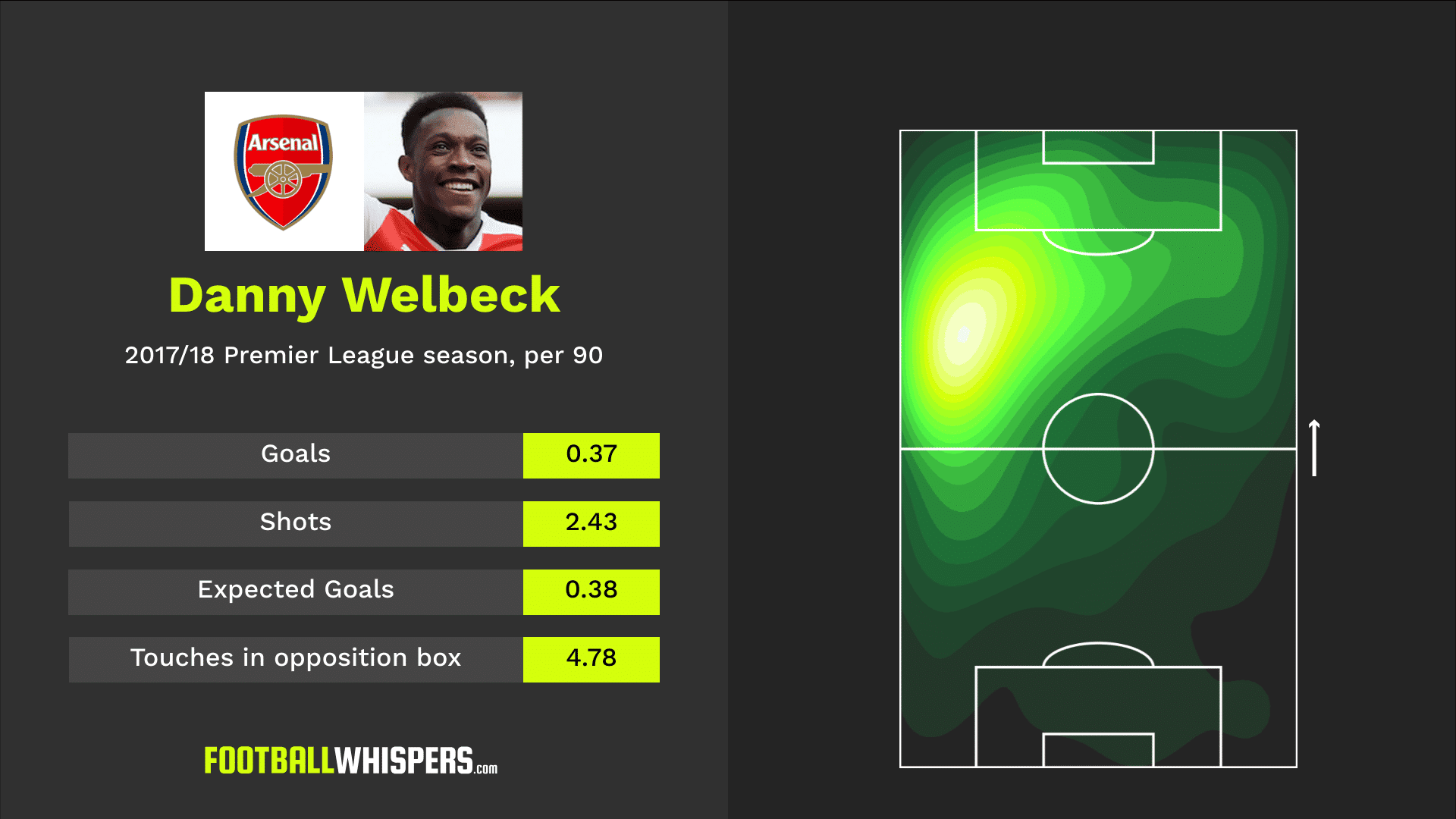 He also demonstrated his ability to get involved in the play in deeper positions, completing 23.77 passes per 90, putting him 17th among Premier League forwards and, as is evident from his heat map for that season (above), Welbeck got through a lot of work outside the penalty area.

That could play into Javi Gracia’s hands. The Hornets coach used a 4-2-2-2 system last season with Will Hughes and Roberto Pereyra drifting inside to flood the midfield, rather than playing as traditional touchline-hugging wide players.

However, Welbeck’s arrival gives Watford another option altogether and Gracia is evidently keen to put the Three Lions forward to work.

“He's a very important player, not only for me but everyone in this country,” he told the club’s website. “He's an international player for England, high-quality player and I think he's a very good player for us.

“He's a very good striker or winger; he can play in different positions. He is always attacking, he's a very fast player and is a strong finisher. To have a player of his experience and quality is good for the team.”

Watford and Welbeck have taken a gamble on one another. But if it pays off, Hornets supporters will be cheering rather than jeering the former Gunner.