There was always going to be at least one high-profile casualty of José Mourinho's arrival at Tottenham Hotspur. Danny Rose looks to be that player.

Spurs appointed Mourinho in the hope he would guarantee a first major trophy since the 2008 League Cup final win over Manchester United. What the Portuguese does deliver, without fail, is conflict.

Rose has made just one Premier League start since Mourinho succeeded Mauricio Pochettino on November 20, coming in the 1-0 defeat to Liverpool earlier this month.

The 29-year-old was left out of the squad altogether for last weekend's goalless draw at Watford – ironically one of the sides Sky Sports News claim hold an interest in him.

Inevitably questioned about Rose's absence, Mourinho said: “Between me and Danny, no. I don't know what you mean by tension in the air, I don't have any problem with him.

“The reason why he wasn't selected against Middlesbrough is because we have a young left-back that we want to develop and it was a great opportunity to play [Ryan] Sessegnon,” Mourinho said.

“Also because his performance against Liverpool was not phenomenal.

“Then on the Thursday before Watford, late evening, I got a call from my medical staff saying Danny was calling them with a problem in his back and he wouldn't train the next day.”

Even without Rose for the trip to Vicarage Road, Spurs aren't short of options at left-back. Summer signing Ryan Sessegnon is finally fit to start following his £25million switch from Fulham while Japhet Tanganga has been a revelation since his surprise arrival on the first-team scene.

That's without mentioning the injured Ben Davies and centre-half Jan Vertonghen who can also fill in on the left-hand side of the defence. It all leaves Rose, whose contract is up in June 2021, as the odd man out.

But the former Leeds United youngster has always been his own man. There is a feeling his frank and honest nature hasn't done him any favours at Tottenham, dating right back to the summer of 2017 when he gave a remarkably honest but unauthorised interview to The Sun, criticising the club's recruitment.

Rose has also been pretty forthright about how his knee injury was handled in 2017, as well as treatment by Tottenham supporters in his early days in the first team.

It's not only that. His displays have not been of the requisite level for some time. He has lost a yard of pace and his positional sense and decision-making have been off. Not as quick as he used to be, those shortcomings have been shown up. 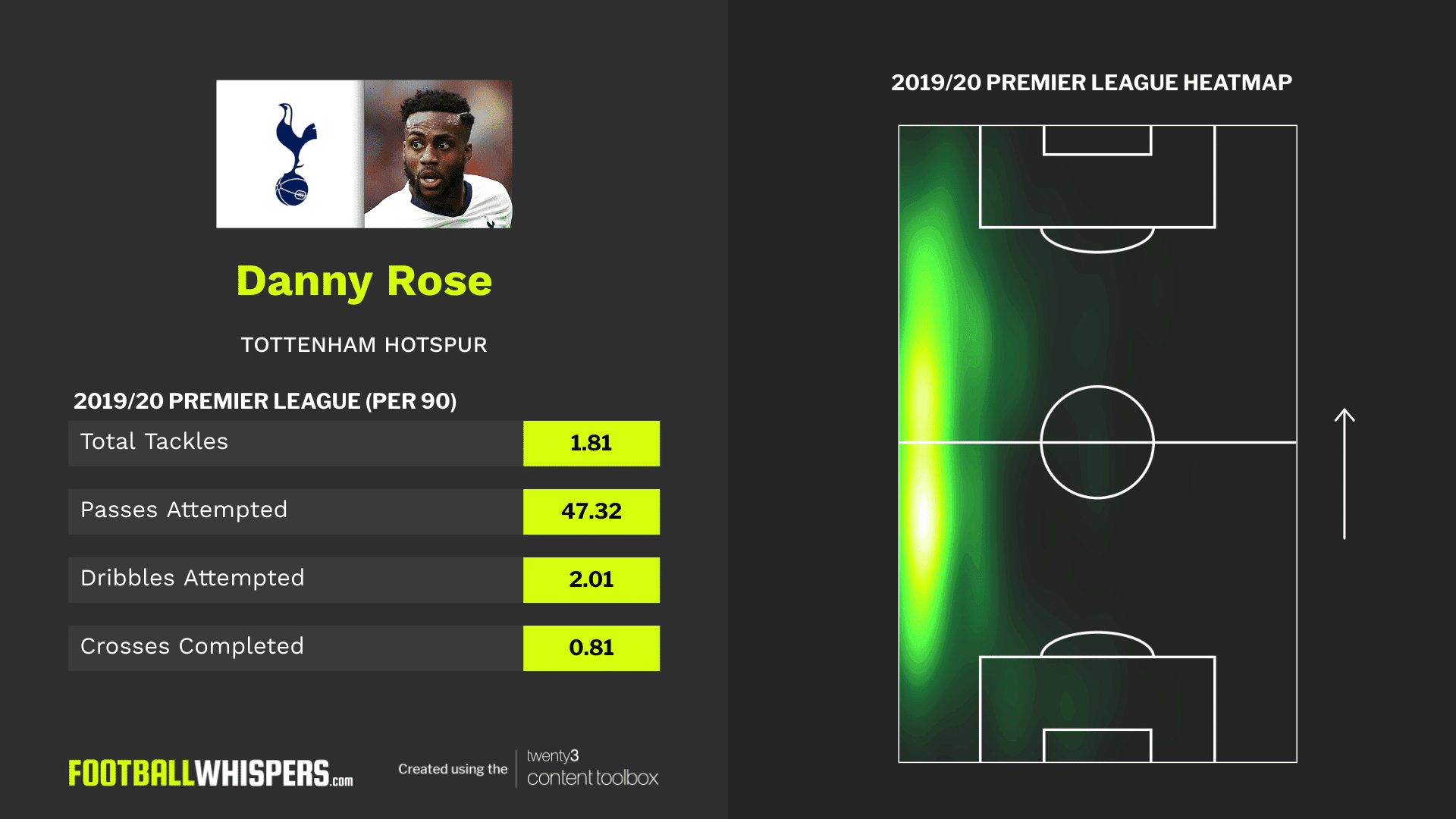 On the attacking side, he's yet to score or assist – though he's ever been a regular in those stakes – as well as creating fewer Big Chances and having significantly fewer touches in the opposition box. If he'd played more under Mourinho, that could have been explained away by his manager's cautious style. But he hasn't. His dribbles attempted and completed are also down and he's crossing with less regularity than before.

Why, then, would any Premier League club be interested?

Rose might not have been at this best this season but there is still a decent player in there. While he isn't embarking on as many dribbles as before or slinging crosses into the box for fun, he is making more forward passes (22.25 up from 19.07) and fewer backward passes (5.23 down from 8.86). Impressively, his passing accuracy has actually increased (80 per cent from 73.7) despite making what would be perceived to be riskier passes.

According to Sky Sports News, Bournemouth are the only club who have made a firm offer to take Rose off Tottenham's hands for good. The Cherries have been without Charlie Daniels for most of the season through injury. He won't play again this term and the 33-year-old's contract is up in the summer.

Lloyd Kelly was signed to replace the ex-Spurs scholar in the long-term but has suffered injury issues of his own, restricting him to just a solitary Carabao Cup outing following his £13million switch from Bristol City last summer.

That leaves Diego Rico. The Spaniard had struggled to adjust following his move from Leganés in 2018 and made just five top-flight starts in his first season in England. This year he has come on leaps and bounds and, while there are some question marks over the defensive side of his game, he has shown himself to be an option. Still, a senior alternative could be necessary. 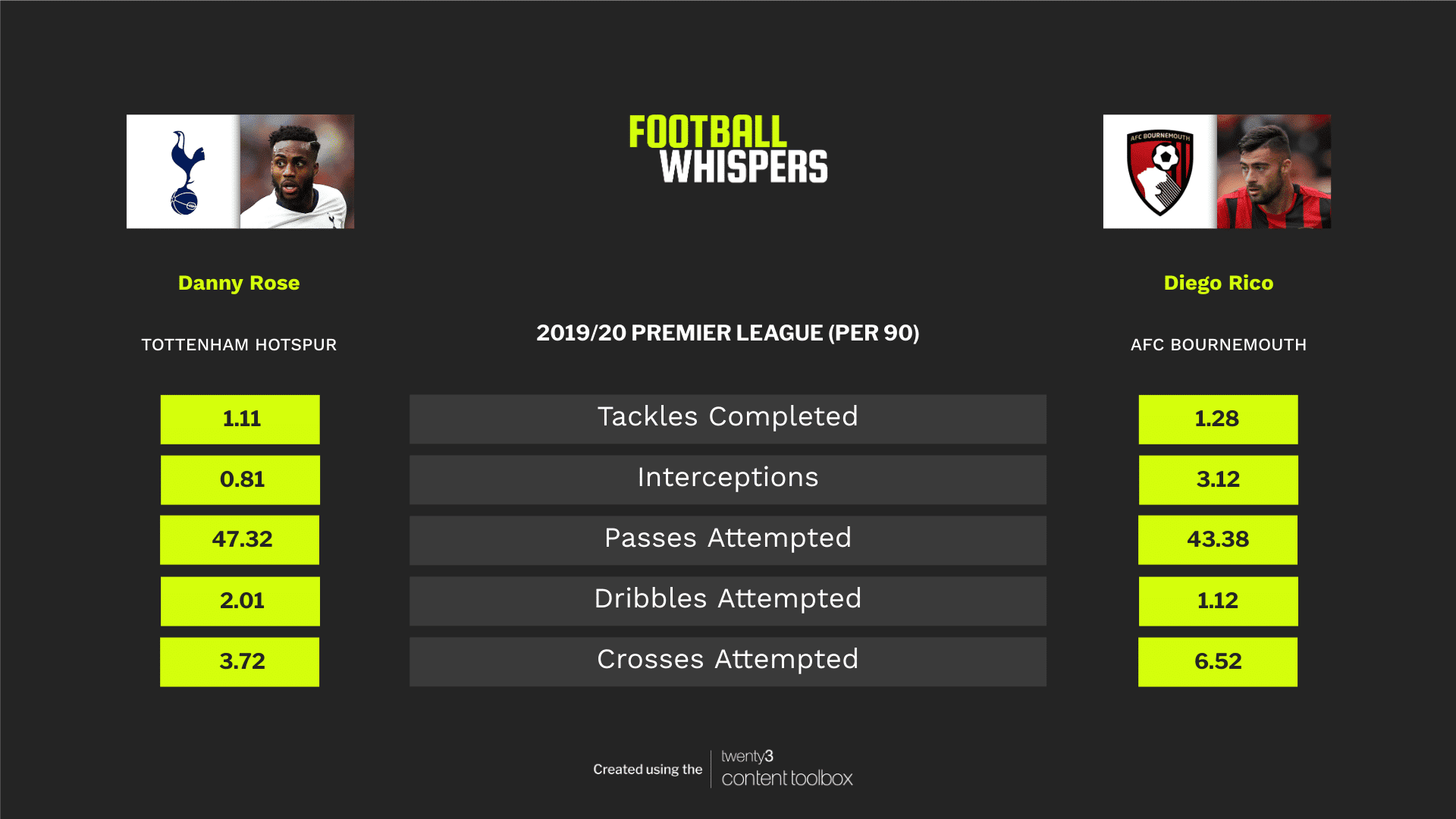 Both Watford and Newcastle see Rose as a short-term measure.  The Hornets, who were keen on Rose in the summer, have recently welcomed veteran Greek full-back José Holebas back from a broken rib. Adam Masina has shone in the 36-year-old's absence while Kiko Femenía, nominally a right-back, has also performed admirably on the wrong side.

Newcastle's interest is more understandable. Paul Dummett‘s season was already over when Jetro Willems, who is only on loan from Eintracht Frankfurt, suffered a season-ending knee injury in the recent 1-0 win at Chelsea.

Given his declaration he would one day return to the north to be nearer his family, perhaps Newcastle would be the best fit. Whoever signs Rose, though, will be getting a reportedly thorny individual with the quality to blossom under Steve Bruce.