Only four players have scored more goals than Danny Ings in the Premier League this season. Yet nobody seems to have really noticed.

Southampton's No.9 has gone somewhat under the radar this term, largely because of his team’s struggles – the Saints sit in 18th position after 16 matches. However, they are just two points off of 14th-placed Everton and four behind 12th placed Brighton.

Ings has already eclipsed his total for the entirety of last season. Without him, Ralph Hasenhüttl’s side would be in serious trouble. The 27-year-old is responsible for 50 percent of the goals the team have scored in the Premier League during the current campaign.

The former Burnley forward has found the back of the net against Liverpool, Tottenham, Chelsea, Everton and Arsenal. Currently, he’s on a five-game goalscoring streak and the last time he drew a blank was over a month ago.

The Saints may only be a couple of positive results away from climbing the table but by the same token, they’re only a couple of negative ones away from propping up the bottom of the league.

Heading into the busiest period of the season, Southampton need Ings more than ever. Hasenhüttl and his charges take on West Ham United, Aston Villa, Chelsea and Crystal Palace all before 2019 comes to an end. If they have aspirations of staying up, a minimum of six points is needed from these four matches.

It is a big ask but in Ings, the Saints have a striker in the form of his career. The one-time Liverpool attacker isn’t just scoring more goals, he’s improved every aspect of his game.

For starters, his expected numbers are up. Last season, Ings had an expected goals average of 0.38. This time around it is 0.57 per 90.

His open-play post-shot expected goals have improved, too. This stat takes into account where a shot is taken from and where it lands on target. It analyses whether or not a player adds value to their efforts. 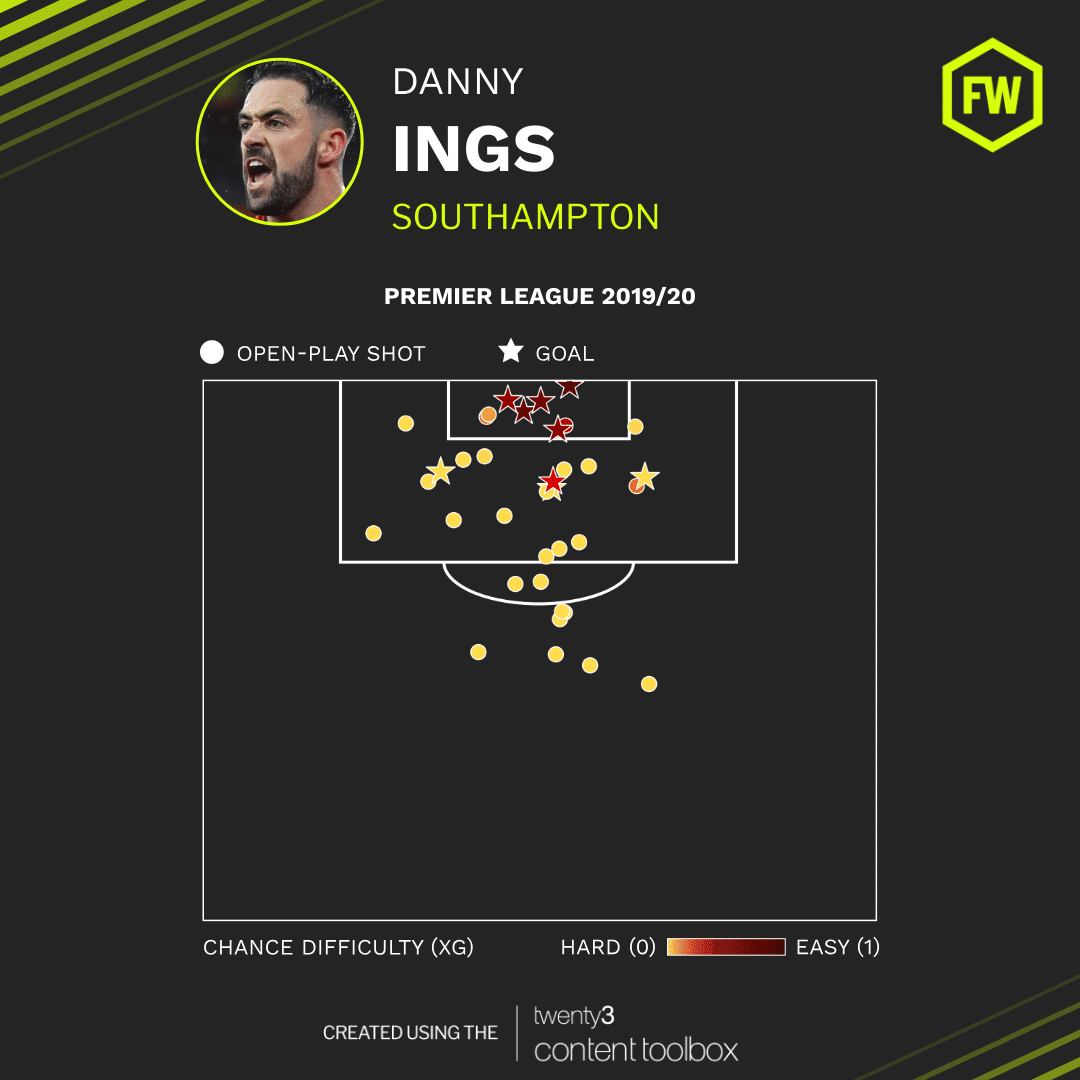 During the 2018/19 campaign, Ings wasn’t adding value to his efforts, with his post-shot expected goals average coming in at 0.23 per 90. This term, he’s improved.

He’s not adding value but he’s no longer decreasing the chances he’s getting with poor finishing. His expected goals and post-shot expected goals averages are identical. It’s why his goal return has improved despite him taking the same number of shots as he did last season. It’s also why he’s now scoring more of his big chances.

He’s now a much more clinical player and Saints are benefitting because of it. It’s no coincidence that this upturn in form has occurred when the versatile striker has avoided injuries.

This could turn out to be a big season for both player and club. Southampton are in a relegation battle right now and dropping down a division could lead to a mass exodus of players. But this could well be Ings’ final season with the club.

Though he only joined the south-coast side permanently in the summer, he’s shown he can cut it in the top-flight of English football and teams are always in need of reliable goalscorers.

Leicester need a successor to Jamie Vardy. Wolves are reportedly in the market for a new striker, too. Crystal Palace have been in dire need of a pure goalscorer for quite some time while Everton still haven’t replaced the goals they lost when they sold Romelu Lukaku.

So if he keeps his form up, it will be no surprise to see the Southampton striker become one of the Premier League's favourite Ings.