Very few people would’ve predicted those who are in the race for the Golden Boot this season.

At the start of the campaign, Mohamed Salah, Sergio Agüero, Pierre-Emerick Aubameyang and Harry Kane were the firm favourites for the top scorer award. Yet as 2019 slipped into 2020, it's Danny Ings challenging Jamie Vardy for the crown as the Premier League’s most prolific marksman.

The Southampton forward has 13 goals to his name this term and is just four shy of Vardy despite playing for a team battling relegation. The former Liverpool forward is averaging a goal every 111 minutes in the English top-flight and, of those players with ten or more strikes to their name, only Vardy and Agüero can boast a better average.

In his last 15 appearances for the Saints, Ings has struck 12 times. He even went on a run of scoring in five consecutive matches and his goals have helped Ralph Hasenhüttl’s men climb to 12th in the table. The 27-year-old has managed to score against Chelsea, Liverpool, Arsenal and he scored the winner against Spurs on New Year’s Day.

What initially appeared to be a patch of good form has quickly revealed itself to be Ings’ actual level. He wasn’t simply running hot.

While Marcus Rashford and Tammy Abraham have earned most of the attention among potential England forwards, it's Southampton's No.9 who should be dominating the headlines, especially with the Euros just around the corner.

Kane has been the undisputed leading man for England over recent years but if Gareth Southgate is going on current form, which he often claims to be, then Ings has usurped the Tottenham Hotspur talisman.

Not only is the one-time Burnley striker outscoring the England captain, he’s also outperforming him in a number of other categories. It’s becoming more difficult with every passing week to overlook this. 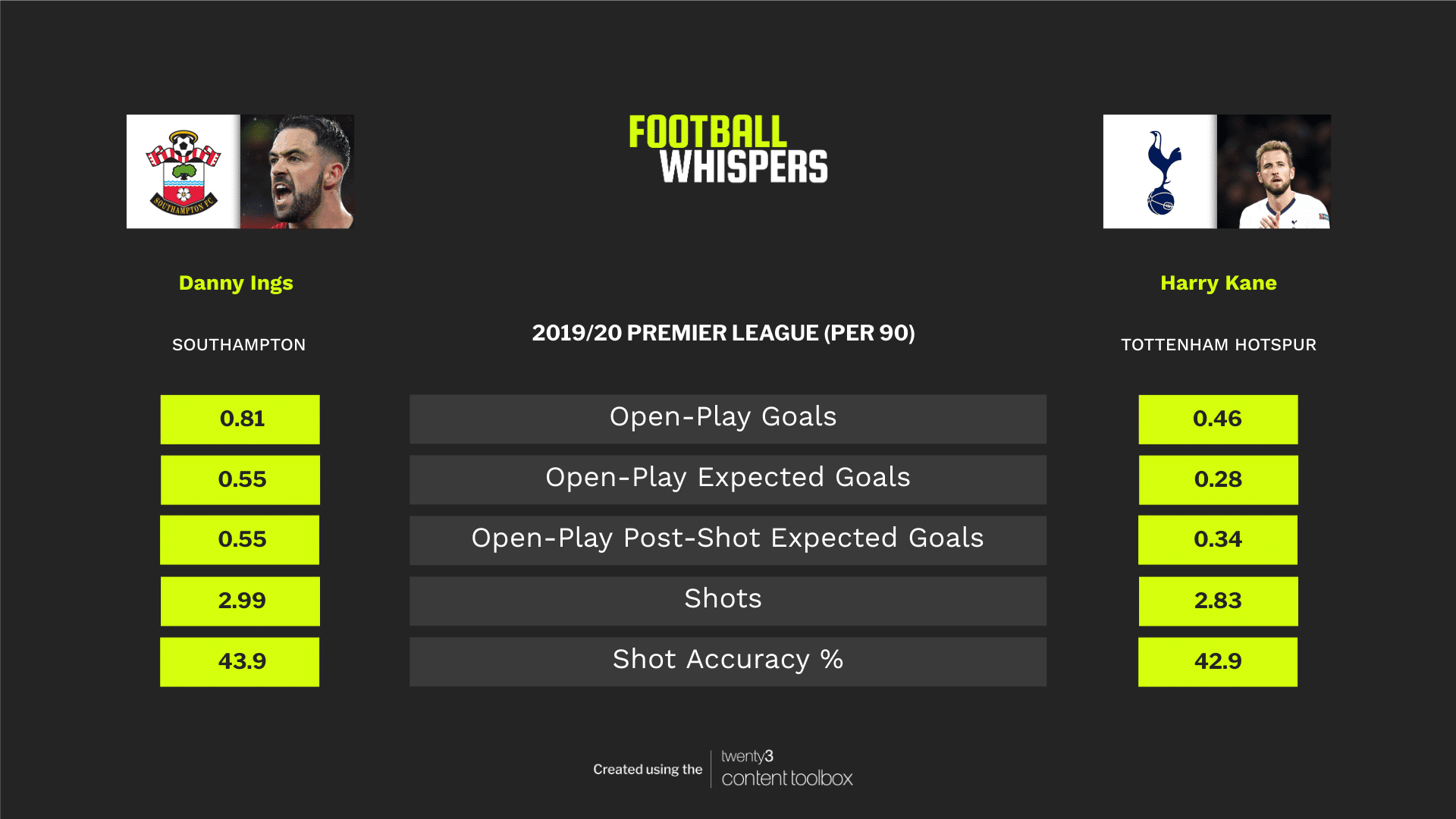 The goals per 90 stat doesn’t tell the entire story. That’s why expected goals (xG) are so important. The above graphic highlights open-play xG. This removes penalties, not because they’re not as valuable but because they can skew the picture. Some teams win more spot-kicks and this means penalty takers have more opportunities to score. It makes them reliable from the spot but strikers are there to impact open-play.

Ings’ open-play xG average is almost doubles Kane’s – despite playing in an inferior team. Then there’s open-play post-shot xG. This metric analyses where the shot was taken from and where it lands on target. It helps highlight players who add value to their attempts. Kane adds 0.06 to his shots with his placement while Ings is par. But even so, the Southampton man is still 0.21 better off on a per-90 basis despite having roughly the same number of shots and landing a similar amount on target.

What we’re able to take away from this is that Ings gets into better positions. He’s more of a danger than Kane. 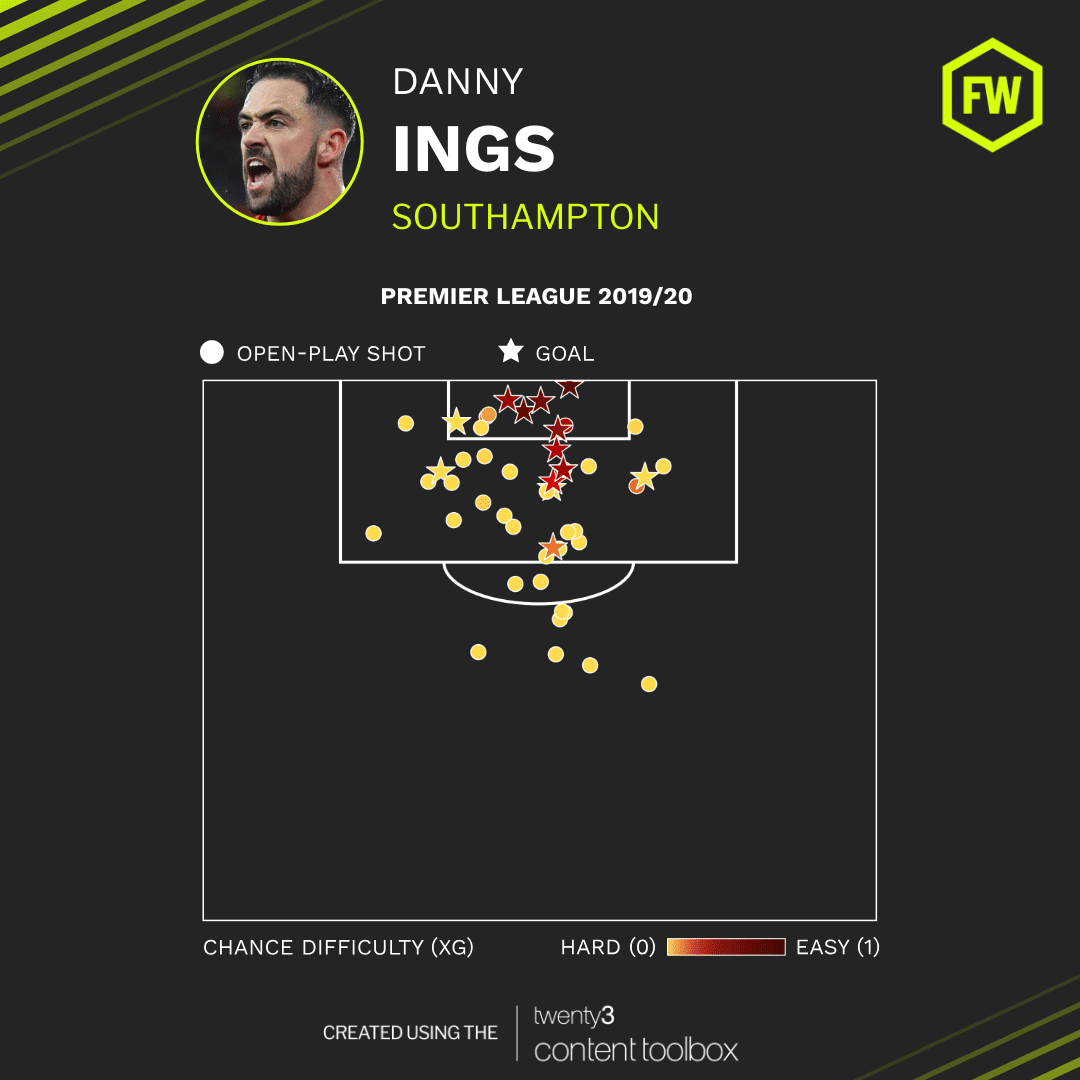 Ings' shot map helps visualise why this is the case. He’s taking very few efforts from outside the penalty area, instead shooting from 12 yards or closer. At first glance, those chances appear to be easy finishes but they’re only simple because of his positioning. The hardest part of the game is being in the right place at the right time yet Ings has managed to master it.

But the Bournemouth academy graduate is much more than just a poacher. Not only is he bettering Kane’s offensive stats, he’s doing a lot more defensively too. These stats rely on the system being used but they help highlight Ings' influence without the ball.

As expected, Ings is the busier of the two. He’s attempted three times as many tackles as Kane on a per-90 basis and wins almost 40 per cent of them. The Southampton forward is also completing twice as many ball recoveries.

Again, form and stats are closely linked to the systems players are being utilised in. But Ings, this season, has shown he can be an effective goalscorer while also chipping in defensively.

The 27-year-old is versatile, too. He brings a lot to an already fluid forward line and he should be at the forefront of Southgate’s thoughts. Kane’s dominance as England’s leading man us under threat. A strong finish to the season could well see Ings claim an unlikely place in the Euro 2020 squad.