It isn't often a player of Daniel Sturridge‘s quality is available on a free transfer, so teams across Europe, and particularly the Premier League, need to make the most of this opportunity.

The two-time European Cup winner's seven-season stint with Liverpool is coming to an end this month after the Reds decided not to extend his contract. He leaves Anfield a cult hero but injuries prevented him becoming a full-blown club legend.

While he was on the periphery this season – Jürgen Klopp often opted to turn to Divock Origi as opposed to his No.15 – it is worth noting Sturridge wasn't plagued by injuries during the 2018/19 campaign.

In fact, he's not been ruled out for a sustained period of time since his loan spell with West Bromwich Albion during the 2017/18 season.

He really could score every type of goal. pic.twitter.com/EYEdmTy1Xg

Sturridge found his playing time limited on Merseyside simply because the Reds evolved without him. Yet despite this, he still managed to chip in with several big goals this term.

The England international spectacularly scored against former employers Chelsea to salvage a point and keep Liverpool's unbeaten to the start intact earlier on in the campaign. He also nodded home against Paris Saint-Germain in the Champions League to kick things off for the Reds in Europe's premier club competition.

Due to Sturridge's injury record, he's going to be considered a risk. That's understandable. But at 29 years old, he's worth a gamble. During the 2013/14 campaign he was, at times, unplayable and every bit just as good as Luis Suárez.

Sturridge has played very little football over the past three seasons yet, when given an opportunity on the pitch, he does still add value to his shots.

In other words, he makes opportunities better due to the placement of his efforts on goal. And in that period he's added 0.30 to his expected goals tally.

With a point to prove, which he has, Sturridge could well be a game-changing signing for a club and one of the shrewdest investments they will make.

Here, we take a look at three Premier League sides who could benefit from signing the striker.

The Foxes have aspirations of gatecrashing the top six next season. They have a squad littered with potentially brilliant players and a manager in Brendan Rodgers who can maximise their talents. Rodgers is also the manager who unleashed a frustrated Sturridge onto unsuspecting defences during his time as Liverpool boss.

He knows what the former Manchester City forward is capable of and he knows how to get the best out of him. It also just so happens Leicester need attacking reinforcements.

Over the past two seasons, the 2016/17 Premier League champions have averaged 1.4 goals per game in the English top flight. Their expected goals average over this period id 1.38, so they're basically on par and are reliable goalscorers.

The issue the Foxes have, however, is they are reliant on Jamie Vardy. During this period he's averaged 0.6 goals per 90, overperforming his expected goals by 0.15.

Beyond him, Leicester's options are fairly limited. Kelechi Iheanacho has failed to deliver on his initial hype and despite getting into high-quality areas, as evidenced by his 0.37 expected goals average, he's not a reliable finisher.

Vardy is robust but at 32 his game time is going to have to be managed a lot more than it has previously. The drop off in quality from Vardy to Iheanacho is drastic, but it's less of a decline when comparing Vardy to a fully-fit Sturridge.

Like the Leicester No.9, Sturridge is an instinctive finisher who thrives in space and transitions. Something which is likely going to be a key part of Rodgers' system at the King Power Stadium. 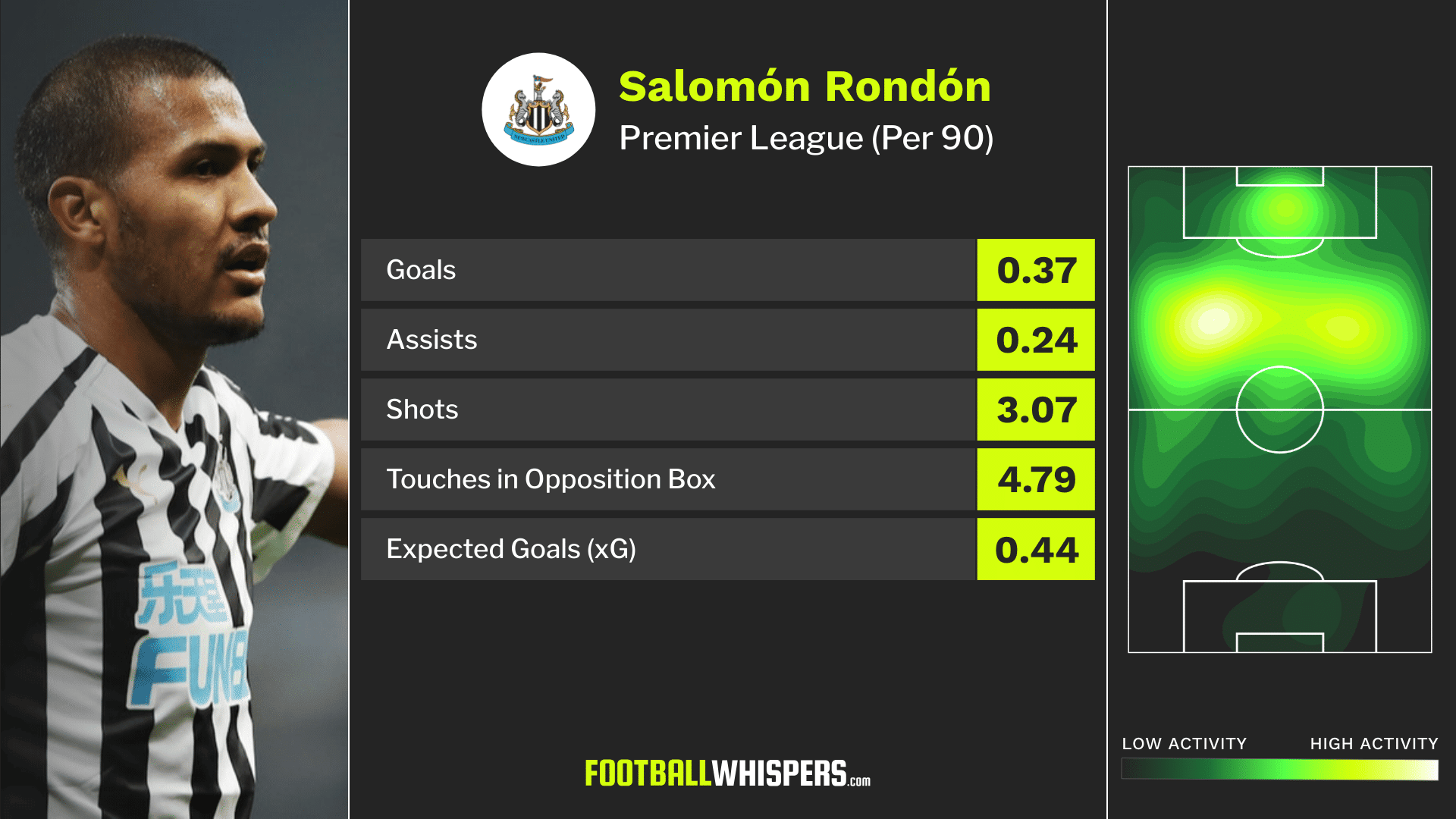 The Magpies need a forward. Salomón Rondón was a revelation for the Toon Army last season, netting 11 times in the Premier League to help ensure survival. There are no guarantees he returns to St James' Park, though, and West Ham United are believed to be interested in the West Brom forward.

His departure leaves a void in to fill. Rondón was responsible for 26 per cent of the goals Newcastle scored during the 2018/19 campaign, and he also chipped in with seven assists in what was a memorable season for the 29-year-old.

Those goals need to be replaced, as does the attacking threat the Venezuela international posed.

While Sturridge wouldn't be a like-for-like replacement, he is more of a traditional Rafael Benítez forward in the sense he shares similarities with Fernando Torres and Mista. If he stays fit he's got more than enough ability to not just replace Rondón's goals but eclipse what he managed. 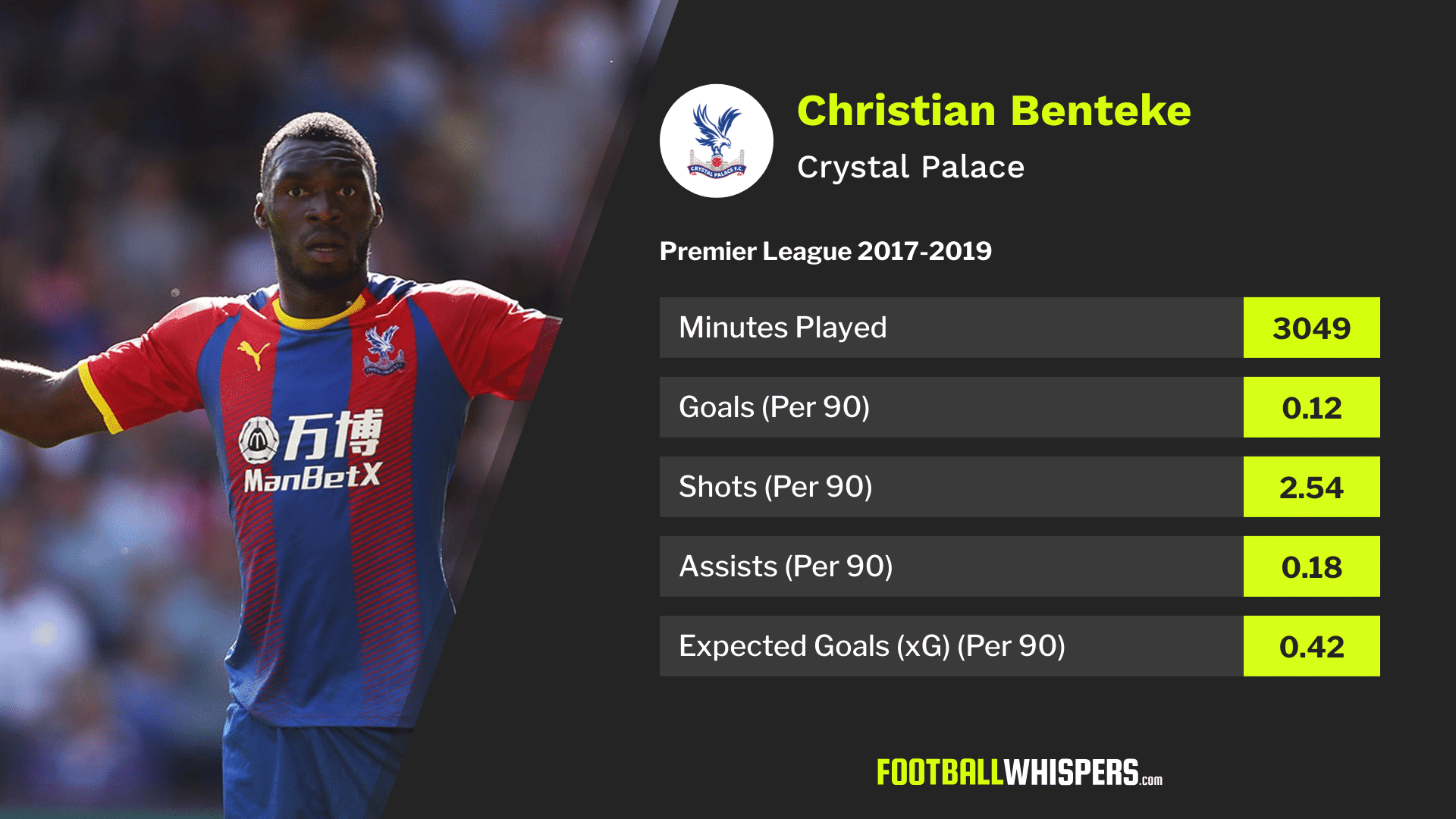 Crystal Palace are underperforming their expected goals total over the past two seasons by 11. It is a substantial amount and the main culprit for this is Christian Benteke.

The former Liverpool forward has struggled since the move to Selhurst Park and the graphic above explains why. Despite regularly getting into dangerous areas – his average of 0.42 expected goals per 90 puts him in the top 20 in the league – his finishing is abysmal.

It may sound extreme but Benteke's wastefulness is the difference between a mid-table finish and a push for the European places. The Eagles finished just eight points behind seventh-placed Wolves and the odd goal here and there turns losses into draws and draws into victories.

With Wilfried Zaha expected to stay, what Palace need most is someone who can supplement what the winger does. Sturridge has done that previously and can do it again.

Swapping Benteke for the 26-cap England man could be clever business.