Jurgen Klopp has some deadwood to clear out at Liverpool. The Anfield outfit have been busy this summer, splurging around £160 million on the big name, big money signings of Alisson Becker, Fabinho, Naby Keita and Xherdan Shaqiri, but there remains a number of players at the club who weigh down the squad. Daniel Sturridge was deemed to be one of them.

Some Liverpool fans, preoccupied by their team’s run to the Champions League final last season, might even have forgotten that Sturridge was still on their books. After all, it wasn’t as if the 28-year-old made much of an impression on loan at West Brom last term, floundering and toiling for form as the Baggies succumbed to relegation.

Most assumed that Sturridge would be among the fringe players sold off by Liverpool this summer. It was widely agreed that the striker would join the likes of Lazar Marković, Simon Mignolet, Divock Origi and Danny Ings on his way out of the Merseyside club. His performances in pre-season have scrubbed this assumption, though.

Sturridge has impressed over the course of Liverpool’s three-game tour of the United States, raising the prospect that he could stay at the club after the transfer window closes next week. 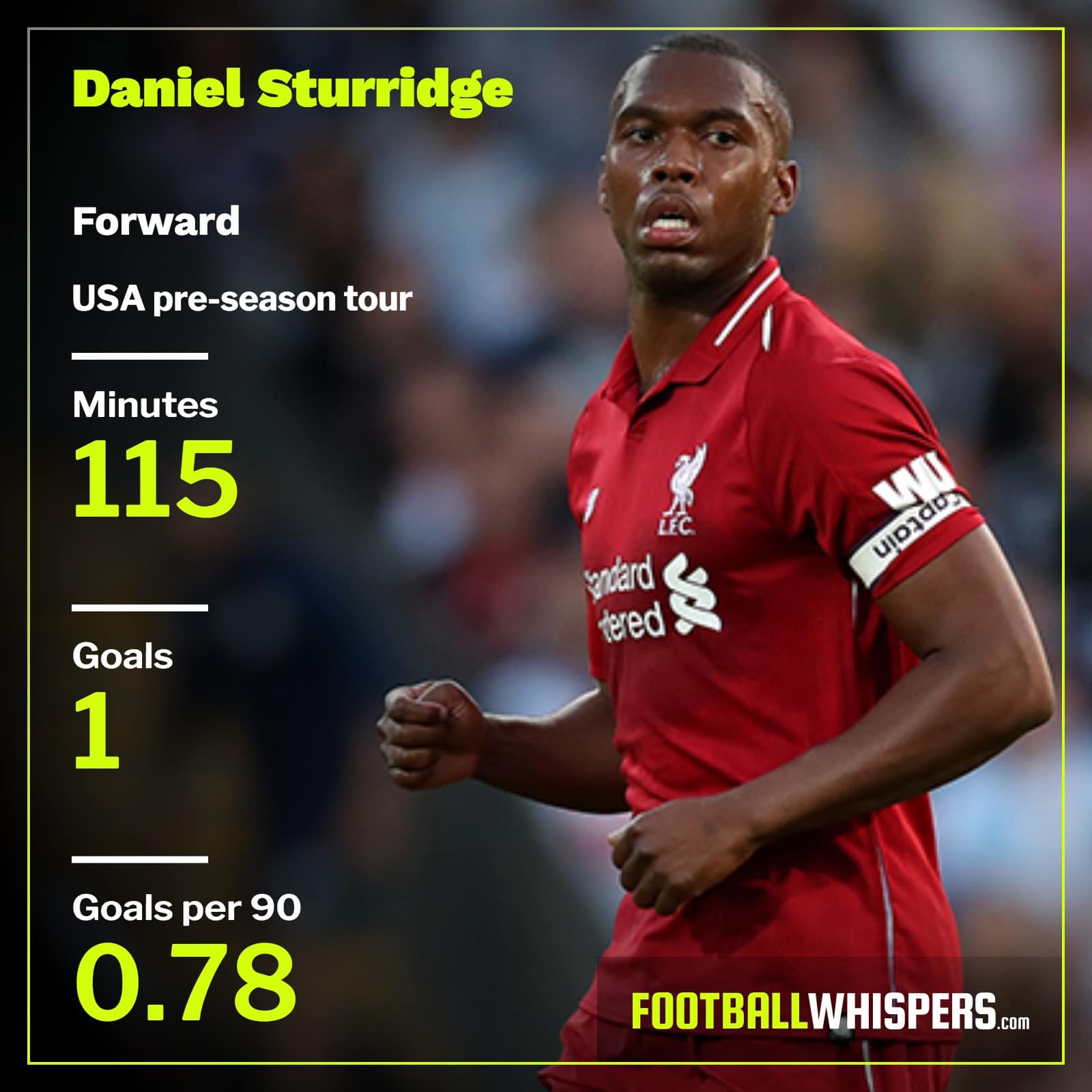 Fitness and avoiding injury has been an issue for Sturridge these past few years, but he has served us all a reminder this summer of just how good he can be.

This is why Liverpool should take one last gamble on the 28-year-old by keeping him around this season. It could backfire, especially with Sturridge in the final year of his contract, meaning the Reds could miss out on a fee for the player if it all goes wrong, but the pay-off could be significant. It could be yet another factor that takes them that bit closer to a genuine Premier League title challenge.

Of course, no matter whether Sturridge stays or moves on, Roberto Firmino will be the focal point of Liverpool’s attack this season. The Brazilian enjoyed the season of his life last term. It saw him make the progression from promise to fulfilment. But his brilliance isn’t just found in the goals he scores, but the way he facilitates others around him.

Firmino isn’t a traditional number nine. He averaged 1.5 key passes per game last season, which is more than any other Liverpool player besides Mohamed Salah, Sadio Mané and Philippe Coutinho, from the first half of the campaign. He wasn’t in the top three of Liverpool’s most prolific shooters last season, either, averaging 2.3 shots on goal per game compared to Salah’s average of four shots per game.

Compare these statistics to that of Sturridge’s over the 2013/14 season, when the striker was at the top of his game as Liverpool came within just a few points of winning the Premier League title. Sturridge netted 21 times in the Premier League that season, averaging 3.4 shots on goal per game and just a single key pass per game as well.

Sturridge isn’t a player of Firmino’s mould, but that’s why he could prove to be so valuable to Liverpool this season.

A little bit of something different

Opposition sides will be wiser and shrewder in the face of Klopp’s tactics this season. They will be more familiar with what to expect and so Liverpool must be more adaptable. They must have more than just one trick up their sleeve and this is where Sturridge would help them.

“When I came here I was very excited about the fact I would be working together with him,” explained Klopp this week when asked whether Sturridge was in his plans.

“Since then he has had a few injury issues. Does he have to play 50-something games? No. But hopefully he will play a few really good ones. That is the plan.”

Indeed, Sturridge’s Liverpool future will be down to fitness more than anything else. No player in English football has suffered such bad luck as the striker has over the past two or three years. Klopp might have to tailor individual training to make sure Sturridge avoids injury this season. If he can do that, Sturridge could be the Plan B Liverpool need.

“I have always been hungry, you know that,” he said in an interview this week. “The hunger will never change. I’m taking every day as it comes with a positive mind-set. That’s all I’m going to do.

“Pre-season has been going great but, you know, I’m not getting too carried away. It’s just great to be part of the club and helping and making sure that we can win games.”

It’s no secret that Liverpool’s frontline will feature Firmino, Salah and Mané when all are fit and when the big occasions come round. But if they are to challenge Manchester City at the top of the Premier League this season, they must have options. More options than they had last season. Sturridge has shown enough this summer to be one of them.