Manchester United don't often buy players from the Championship. In fact, the last outfield player to make the leap was Wilfried Zaha in 2013.

That, of course, worked out terribly for all parties, and under Ed Woodward's watch Championship players have not been viewed as ‘prestige' enough. United have been more intent on building their social media following than building for the future.

However, last season forced bigger clubs to wake up and smell the second-tier. James Maddison was a hit at Leicester City while David Brooks, who despite looking like he had mischievously snuck into the Vitality Stadium with a couple of his friends, duly enhanced his reputation after moving to Bournemouth from Sheffield United.

United have followed suit. While they remain linked with esteemed names they're unlikely to land, Daniel James‘ imminent arrival from Swansea City has been widely hailed as a step in the right direction.

The Wales international, who is set to become United's first signing under Ole Gunnar Solskjær after undergoing a medical on Thursday, will cost the club £15million, but that fee may rise to £18million.

He joined the Swans in 2014 as an academy prospect and made his first-team debut in February 2018.

However, it was Graham Potter's appointment that opened the door to more opportunities at the Liberty Stadium; he made his Championship debut in August and went on to make 33 appearances during the 2018/19 season, 28 of which were starts.

Like Zaha when he broke through at Crystal Palace, there was considerable interest in James after a series of eye-catching displays under Potter. By January, Leeds were in for him and, had it not been for an extraordinary turn of events minutes before the transfer window's deadline, he would have been playing his football at Elland Road.

To his credit, James continued to produce the goods for Swansea. His FA Cup strike against Brentford launched him into the viral stratosphere, and he added two more goals and four assists to cap his breakout season. He also marked his competitive Wales debut in style with the winner against Slovakia.

While playing for Leeds under Marcelo Bielsa would have been exciting, United are a different kettle of fish. Zaha had six months back on loan at Selhurst Park to ready himself for Old Trafford, pre-season is five weeks away, with friendlies against Perth Glory on July 13 and James' would-be-employers Leeds four days later.

Over the last year, James has built a respectable image for himself. He refused to let his failed Leeds move impact his form, while it is certainly admirable that, as per Ryan Giggs, he made himself available for international duty despite the sudden death of his father, Kevan, in May.

United will open up a whole new world for James. While he has shown himself to be a tactful, dedicated young man, he can certainly use Zaha's unhappy experience there as a cautionary tale.

United must shoulder the majority of the responsibility for the Ivorian's failure inside the Theatre of Dreams, but Zaha has admitted to wasting the opportunity of a lifetime. 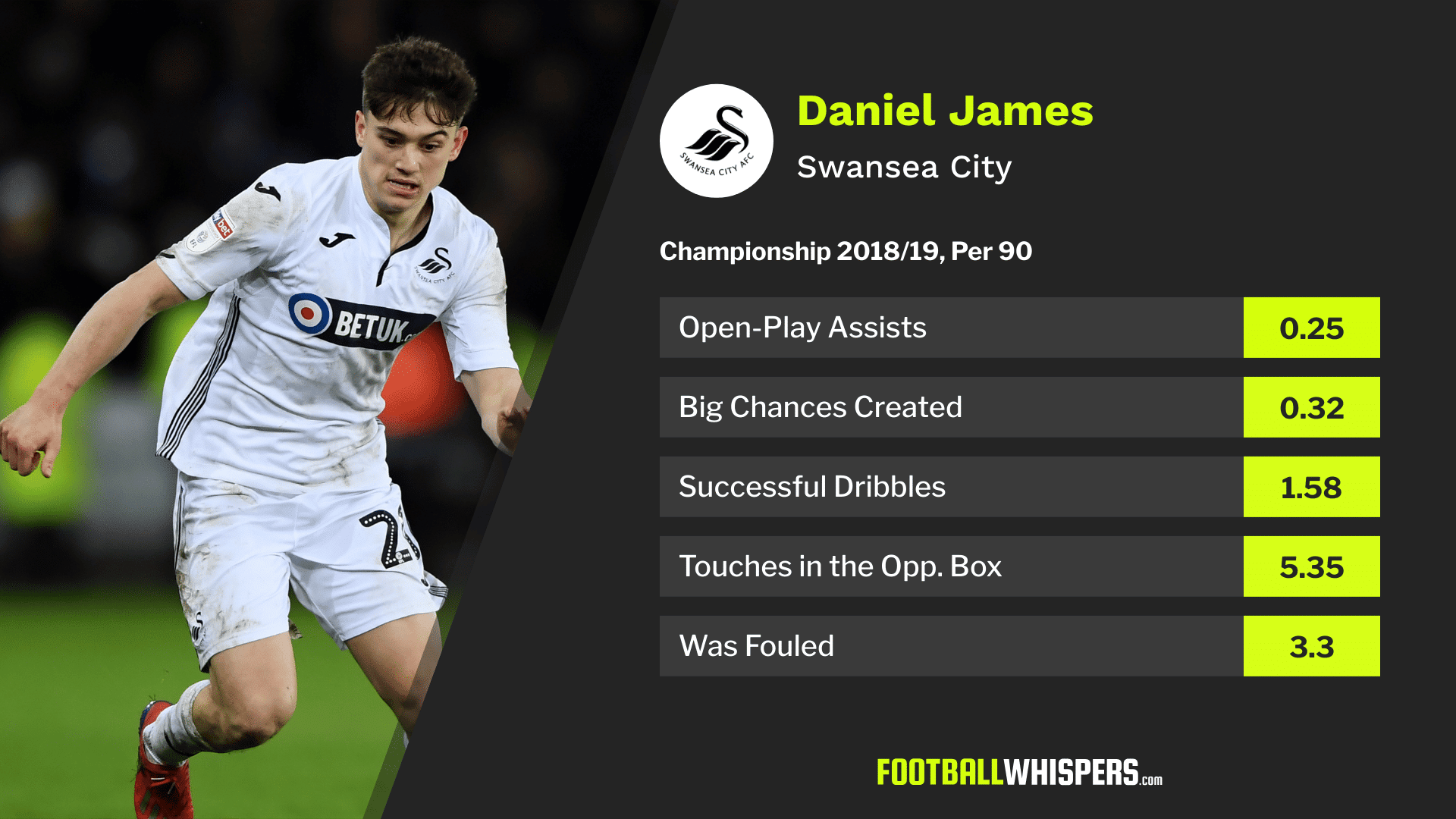 “I was just a youngster who wanted to do tricks,” he told Sky Sports in 2018. “I didn't even care about the end product really.

“Now I take things a lot more seriously – the gym aspect, recovery after games, my decision-making. I've learnt a lot in terms of my all-round game.

“I'm totally different now. I'm definitely more mature and more strong-minded. I had to be mentally strong after what I went through at Manchester United. I think in football, most of it is just mental. Once you've got that sorted, then you're good.”

James can learn a lot from Zaha's comments. His senior career amounts to one year at Swansea and, while Solskjær and his staff are expected to offer him more of a chance than David Moyes afforded Zaha, the onus is on the youngster to stay grounded, patient and wait for his opportunities to shine.

Zaha's remarks about the gym and recovery are particularly pertinent as James is also an electric, elusive winger who draws several fouls per game. For example, in April, Stoke City duo Bruno Martins Indi and Thomas Edwards were sent off within seven minutes of each other for impeding the Welshman.

In fact, only Jack Grealish, Harry Wilson and John McGinn were fouled more than him during the 2018/19 Championship season. And while his bruising year at Swansea will have hardened him, those tackles will certainly be as robust up against some of the Premier League's defenders.

The key difference will be the pace of the games. While England's second-tier is a great league in its own right, it cannot match the intensity of the Premier League when it hits top gear.

The landscape at Old Trafford is much bleaker for James, however, than it was for Zaha, who walked into a dressing room of newly crowned champions.

No, James will be part of a more radical rebuild following a dismal end to last season, but in Solskjær and Giggs, he has two mentors who know how to succeed at Old Trafford, not to mention a club manager who has enthusiastically chased his signature (Moyes never fully figured Zaha into his plans after inheriting him from Sir Alex Ferguson).

Learn from Zaha's experience, and his career can scale new heights at one of the biggest clubs in the world.