It was not long ago that Daniel James could not get a game at League One Shrewsbury Town. The youngster had been sent there on loan from Swansea but struggled to break into the first team and soon returned to his parent club.

Now, things have changed. James, still only 21, is a regular with the Swans. He has also been linked with moves to the Premier League – even Manchester City are said to be interested – and last weekend scored on his competitive debut for the Welsh national team.

James has shot into the limelight, a fittingly rapid rise for a player who has proven himself one of the quickest in the Football League.

Against Slovakia last week, he was the best of a Wales front four that included Gareth Bale, David Brooks and Harry Wilson. James did not look out of place in what his first taste of international football; instead, he thrived, terrorising an experienced Slovakia back four throughout.

“He can go either side, he's intelligent, he works hard and he's a great lad, so I'm delighted he got the winning goal,” Wales boss Ryan Giggs said of James. “He's a talent. When you've got that raw pace, you're a threat at any level. As a winger, you then have to develop the other parts of your game which I feel he is doing.”

It is little wonder, then, that James has been linked with the likes of Bournemouth and Southampton. He came close to joining Championship promotion hopefuls Leeds in January, but a move failed to materialise.

There is, of course, still plenty of areas in which James can improve. While he ranks high for touches in the opposition box (5.55 per 90 minutes) and shots on target (1.03 per 90) for Swansea this season, he has managed just two goals and four assists in the Championship.

That end product can be worked on and developed over the coming years. It is clear already, though, that James has all the attributes required to go on to big things.

He is in the perfect environment, internationally, to learn, too. Taking on the advice of Bale and Giggs is certain to do nothing but accelerate his development.

“It’s massive for me to learn off the gaffer and Gareth,” James has said. “They have shown me a lot. The gaffer told me to keep doing what I do at Swansea and Gareth said ‘keep getting at the full-back’, which is what I did.” 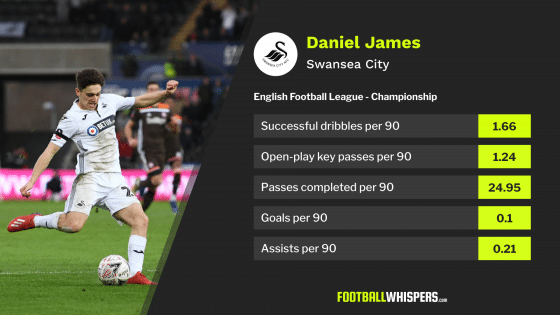 The full backs yet to face James will not be looking forward to it. His pace – as was demonstrated when he ran almost the length of the pitch and finished clinically against Brentford in the FA Cup earlier this month – is unmatched by most. That athleticism alone gives him an edge but James is technically gifted, too, an accomplished dribbler with a powerful shot.

At Swansea, he has clocked speeds of 36kph, which puts him right up amongst the quickest players in football; Kylian Mbappé, Theo Walcott, Leroy Sané and compatriot Bale have all recorded similar speeds.

“I’m sure there are players a lot quicker than me,” James said in a recent interview with the Telegraph. “When people compare me to Kylian Mbappe, I am not quicker than him. There are players like Adama Traore in the Premier League (at Wolverhampton Wanderers) who could have been a sprinter. He’s 10.5 (over 100m), I think.”

Despite James’ modesty, his sheer pace is undeniable. If he is nurtured, coached by the best, over the next few years, there is nothing to suggest he will not become a top Premier League player.

Swansea will, no doubt, be readying themselves for plenty of interest in the summer. They came closing to losing their star player in January and since then his stock has risen further.

These are exciting times, too, for Wales fans, who are spoilt for choice when it comes to young attacking prospects. It was James who stole the show against Slovakia, but Brooks and Wilson are players with equally great potential.

His manager at Swansea, Graham Potter, has emphasised that the youngster still “has got lots to work on”, and there seems little sign of the praise going to his head. The future, though, looks bright for Daniel James if he continues to progress as he has over the last year.