For young footballers, playing for Barcelona's La Masia academy is akin to a budding tech entrepreneur getting a big break in Silicon Valley.

It teaches future stars not just about the beautiful game, but about life. It's as comprehensive as education gets for young starlets.

Which is why it takes a lot of courage for one to pack up his bags and pursue a career elsewhere. Take Dani Olmo, for example. Born and bred in Catalonia, he looked set for a glittering career at the Camp Nou before fate sent him down a different path.

Now turning heads at Dinamo Zagreb, Barcelona are said to be among a number of clubs (including Manchester United, Manchester City and Liverpool) chasing his signature. Here, we run the rule over the fleet-footed Spaniard.

Who is Dani Olmo?

The son of Miquel Olmo, a journeyman forward in Spain's lower leagues, he started his youth career at Espanyol but was snapped up by Barça in 2007. At La Masia, he honed his craft as a winger for seven years before a move to Croatia beckoned.

His switch to Dinamo was not a bolt from the blue. Olmo was captured as a direct replacement for Alen Halilović, the former Croatian wunderkind who failed to make an impression at Barcelona and who is now still waiting on his first appearance under Gennaro Gattuso at AC Milan after his switch to the Rossoneri in the summer.

It's interesting, then, that Olmo is now the player being chased by Barça. Whereas Halilović is struggling to remain relevant (he hasn't played for Croatia since 2016) Olmo seems to have the world at his feet with a clutch of elite clubs potentially offering him the chance to showcase his abilities on a bigger stage.

What are Olmo's strengths?

And his abilities are eye-catching, of that there is no doubt. Olmo made his league debut for Dinamo in February 2015, then still a fresh-faced 16-year-old.

While his integration into the first team was gradual – mixing time between the senior and junior set-up – it wouldn't have taken long for Olmo to feel vindicated.

Sixteen is a critical age in a young footballer's development and, while many would be advised to keep patient as they dream of bigger things (especially at an illustrious club like Barça), Olmo felt gaining regular first-team experience as quickly as possible would best aid his progression.

It was a bold move, yes, but one informed by the countless La Masia students who struggled to break the glass ceiling at the Camp Nou after promising youth careers.

At Dinamo, however, Olmo was able to challenge himself at a senior level on a consistent basis.

One of his greatest assets is the ability to score regularly with both feet. Primarily right-footed, the Spain under-21 international is adept at cutting in off the left flank but is capable of operating on the right, too.

This season, Dinamo boss Nenad Bjelica (who replaced Nikola Jurčević) has also used Olmo in a central role behind the main striker Mario Gavranović to considerable effect, while in the Europa League clash at Anderlecht, he was used as the left-sided member of a midfield three, a mark of his versatility at a young age.

Blessed with electric pace, his ability to turn defence into attack is hugely impressive. In Dinamo's recent victory over Osijek, Olmo killed the game off when, deep into stoppage time, he produced an 80-yard dash before rifling the ball into the top corner.

Possessing such a rapid burst is a natural advantage on the opponent. It's like a golfer who can repeatedly boom 350-yard drives off the tee. However, such power can be useless without a razor-sharp short game. In football, there are players who waste their blistering pace with a poor end product.

Olmo has no such problem. His vision and deft touch are a marvel. His assist for the Spain under-21 side against Iceland last month was sublime. Making a run off Carlos Soler's shoulder, Olmo received the ball from Valencia man before returning the favour with a sumptuous chip over the defender's head, allowing Soler to make it 5-1 during a 7-2 win. 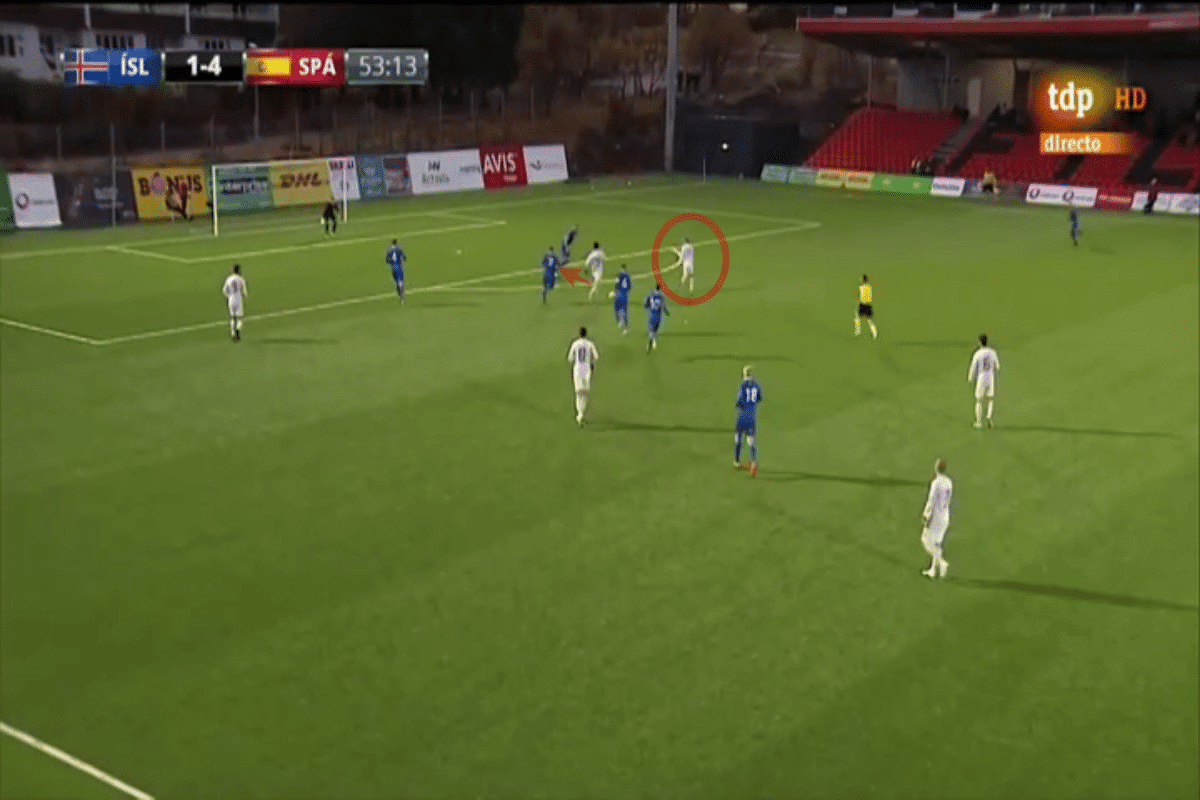 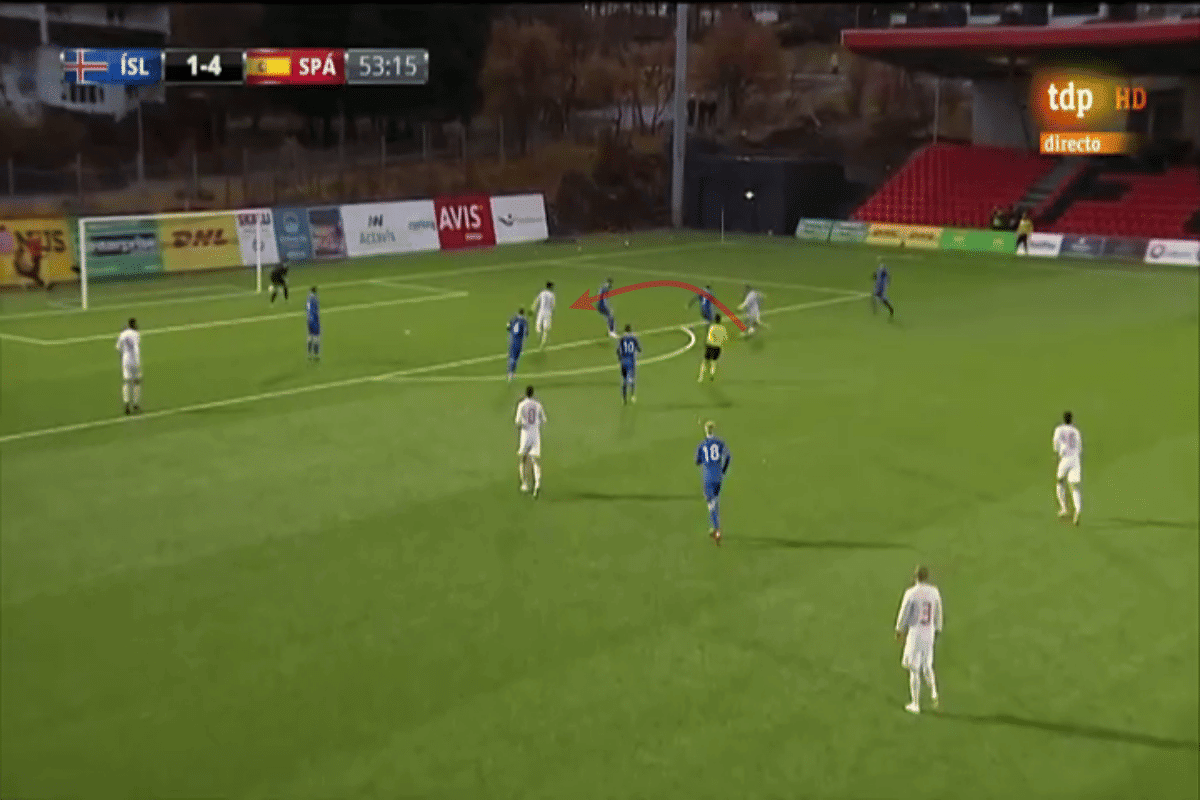 This craft and cutting edge in the final third allowed Olmo to register some impressive stats last season, managing 0.29 goals per 90 minutes (eight in 26 games) and 0.26 assists per 90. His goals per 90 has dipped slightly this year to 0.27 but has upped his assists to 0.38.

He also attempted 9.29 dribbles per game last season and 6.82 this, managing a 66 per cent success rate, portraying his ability to inject urgency into the attack by taking on defenders.

What are Olmo's weaknesses?

Although not necessarily a major weakness, Olmo will be keen to up improve his 78 per cent passing accuracy. In truth, though, it is slightly lower due to the progressive and penetrative nature of his passing.

As with most precocious attacking talents, he is not overly keen on the defensive side of the game. He is usually mostly relieved of such duties at Dinamo but it may be a different story if he moves elsewhere. 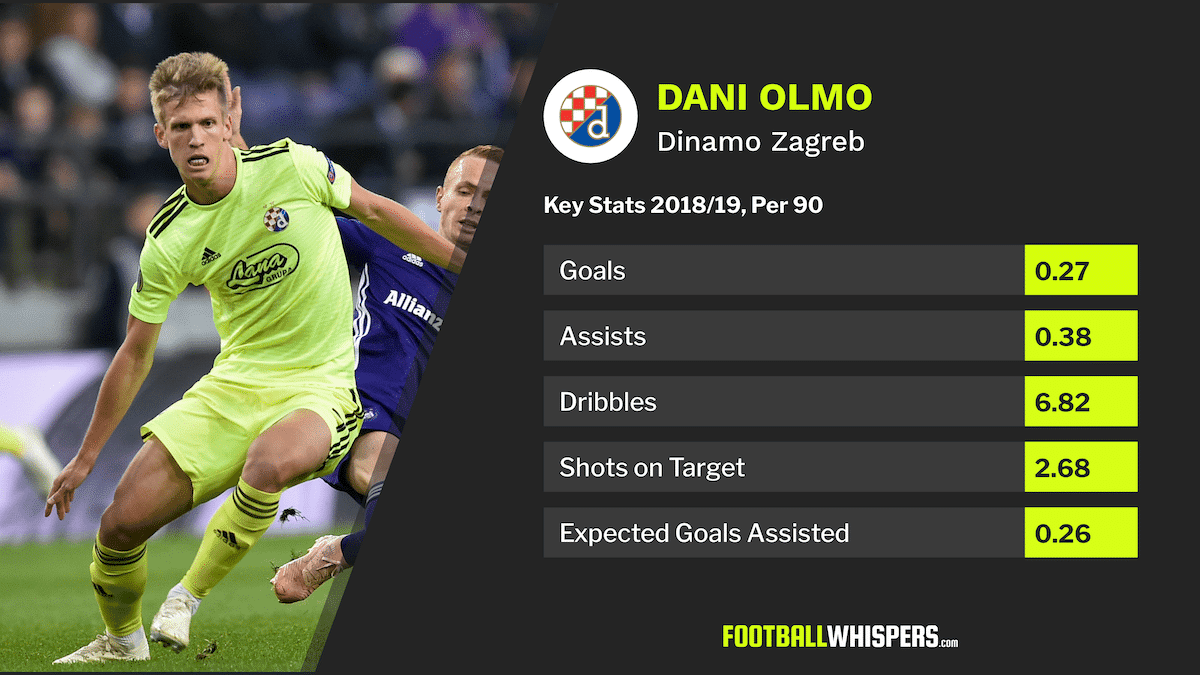 Olmo has been an established first-team star at Dinamo for three years. Having proven himself in Croatia, he will be determined to make his mark in one of Europe's top five leagues.

Leaving Barça when he was 16, a return to the Camp Nou would be attractive in more ways than one; not only would he be afforded the opportunity to provide competition for Ousmane Dembélé, it would move him back to just a 45-minute car journey away from Terrassa, his home.

However, as the example of Halilović has proved, it takes a lot more than talent to succeed at the La Liga champions. There are some who believe Olmo should continue in Croatia for another year or two before making a big step-up. He may feel differently. Dinamo has served him well but he seems destined for greater things. Scouted extensively by several high-profile clubs, he is likely to cost £20-30million.

His international future is unresolved at this point, too. Having represented Spain throughout his youth career, Olmo is due to become a Croatian citizen soon, which may complicate matters, especially given as he has previously expressed an interest in turning out for this year's World Cup runners-up.

Choosing his allegiance almost certainly won't be the only difficult decision looming on the horizon. If Olmo continues to sparkle for Dinamo, offers are bound to start flooding in. He seemed to make the right choice in moving to Croatia in 2014. Hopefully his instincts are equally on point next time around.