Clubs across Europe wanted Dani Ceballos last summer. He sparked a bidding war between the two biggest sides in Spain, before he eventually turned down Barcelona to move to Real Madrid.

He’s thought to have sought guaranteed playing time at the Bernabéu before deciding to make the move to the Spanish capital. Yet the midfielder has barely featured for Los Blancos since arriving in Madrid, starting just two league games so far this season.

He is now believed to be unhappy with his current situation, and expect him to be subject of transfer rumours for a number of Premier League sides next summer. He's already been inked to Arsenal and Liverpool.

Born in 1996 in Utrera, Seville, Ceballos joined Sevilla’s youth system aged eight in 2004. He was released in 2009 due to a chronic bronchitis problem.

The youngster then joined hometown club CD Utrera before joining Sevilla’s city rivals Real Betis in 2011, where he completed his youth development.

Ceballos went on to sign professional terms with Los Verdiblancos in February 2014. His debut for the Andalusian side came in April 2014, before he’d even appeared for their B team, coming on as a late substitute in a 1-0 La Liga loss against Real Sociedad.

He scored his first professional goal for Betis in December 2014 against Racing Santander.

The 2014/15 season saw him became a regular for the first team after their relegation from Spain’s top flight, playing 33 times and scoring five goals from central midfield.

He renewed his contract in October 2015, with a €15million release clause in place.

Ultimately that release clause was Betis’ downfall. Last summer, as the transfer market spiralled out of control, a €15million buyout clause was nothing at all.

A drop of the shoulder and an incredible solo run leaving Italy Under-21 defenders nowhere near him was all it took for many in Europe to sit up and realise that he could be a real bargain.

His form for Spain’s Under-21 side as La Rojita reached the 2017 European Championship final led to Barcelona and Madrid fighting over his future. And last July, he ended up swapping Real Betis for the Spanish capital, despite him being subject of Arsenal and Liverpool transfer rumours.

He was expected to return on a year-long loan deal back to the Estadio Benito Villamarín. Instead, he stayed at Madrid, where he’s barely played, and that could be why his career at Los Blancos looks to be over before it had even begun.

Ceballos would have thrived under the swashbuckling style of Quique Setién, Betis’ new manager this season, while instead he’s sat on the sidelines, his career stalling as Real Madrid’s season goes from bad to worse.

What are Ceballos’ main strengths?

Ceballos’ close control and ability to carry the ball into the attacking third really stand out. He has the intelligence to go past people like they’re not there.

Below, you can see how the 21-year-old can go past players with ease. 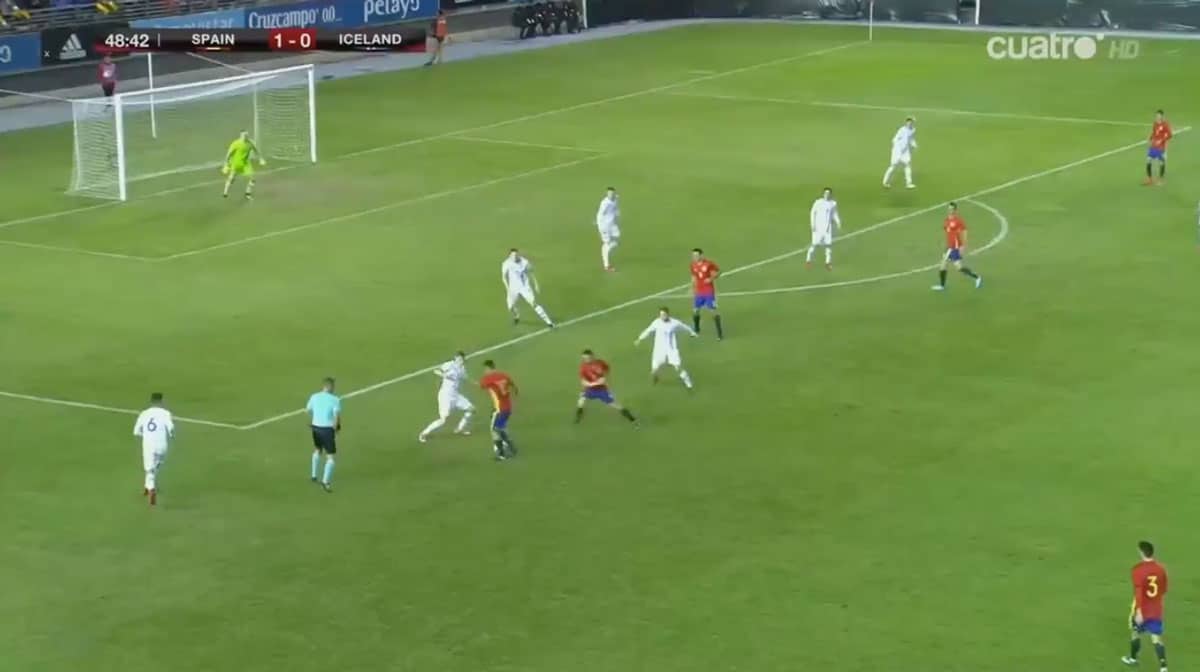 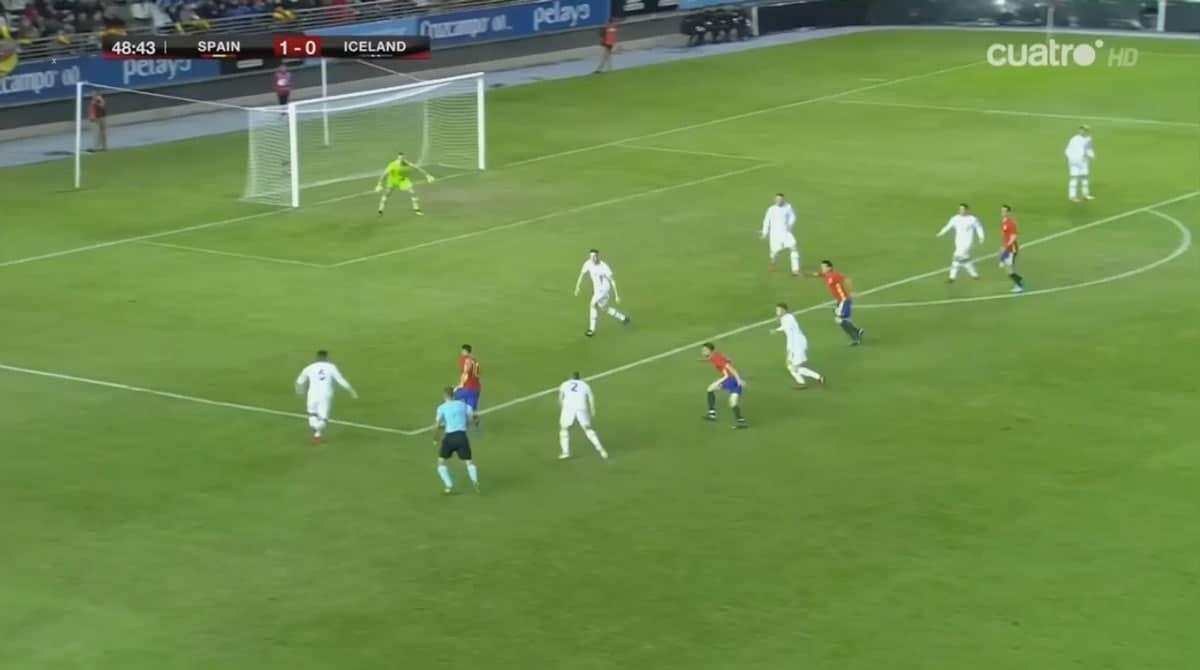 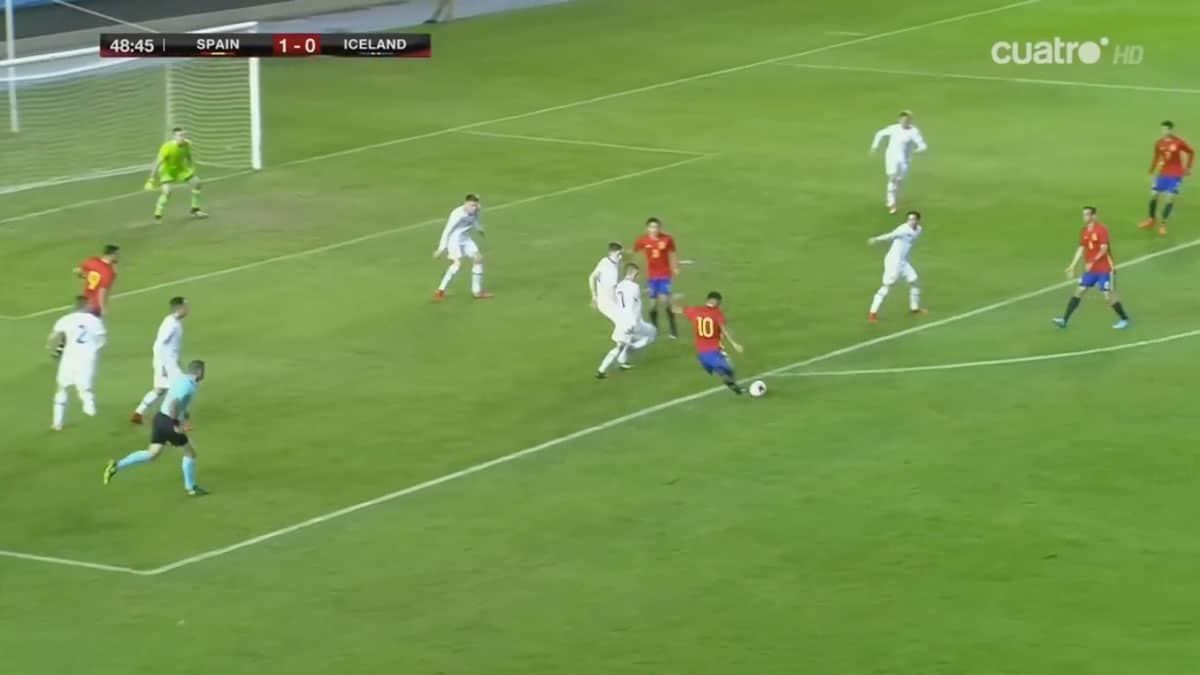 For Spain’s Under-21 side, he walks past Icelandic players like they’re not on the pitch, before getting a dangerous shot away from the edge of the area. 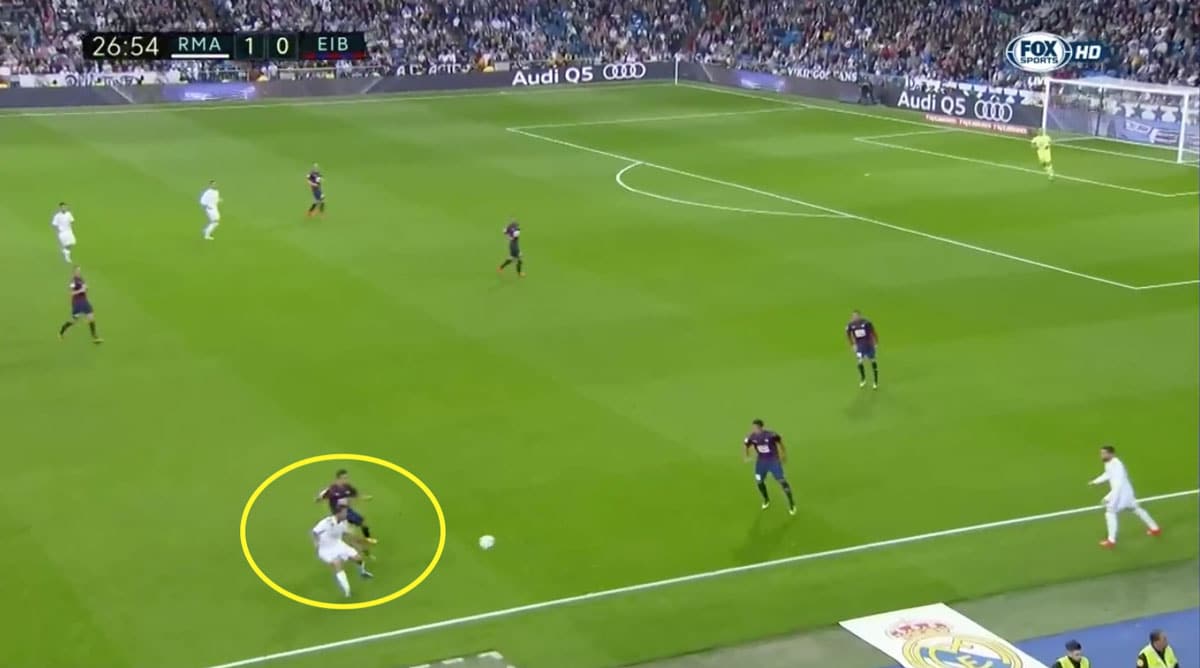 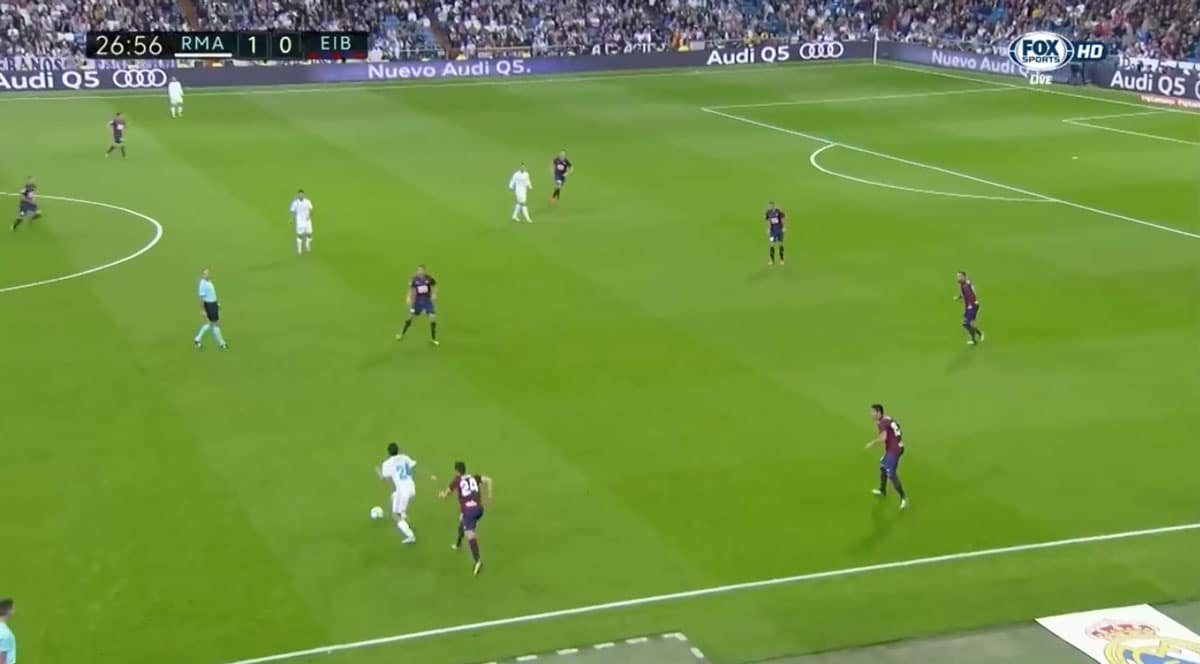 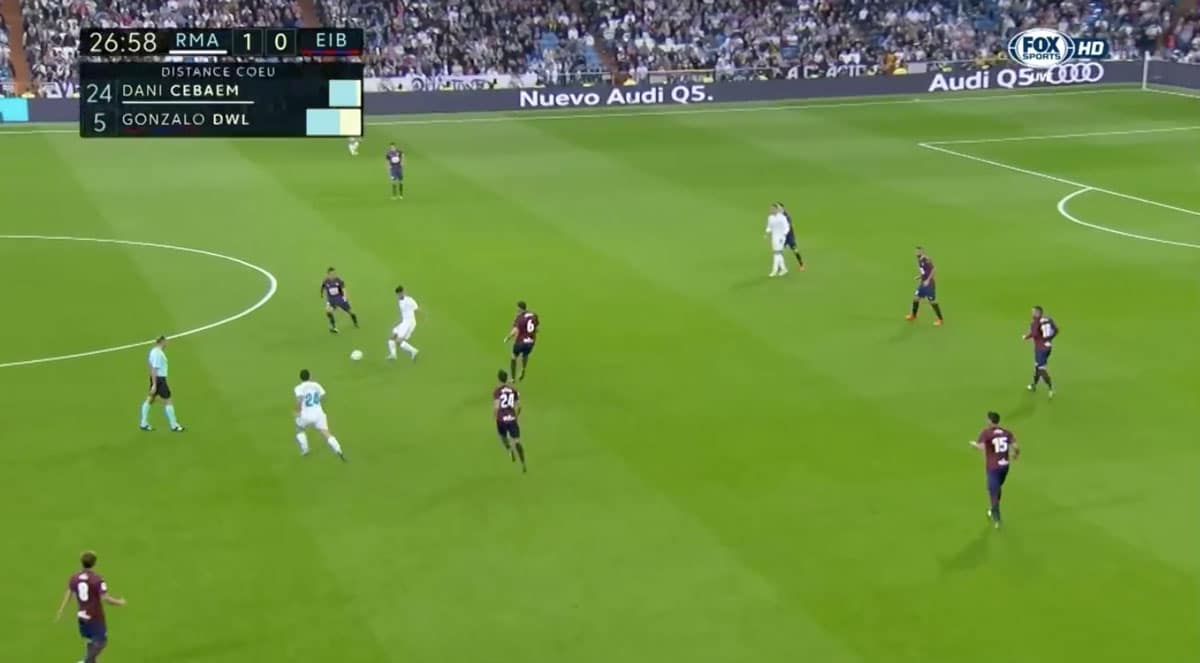 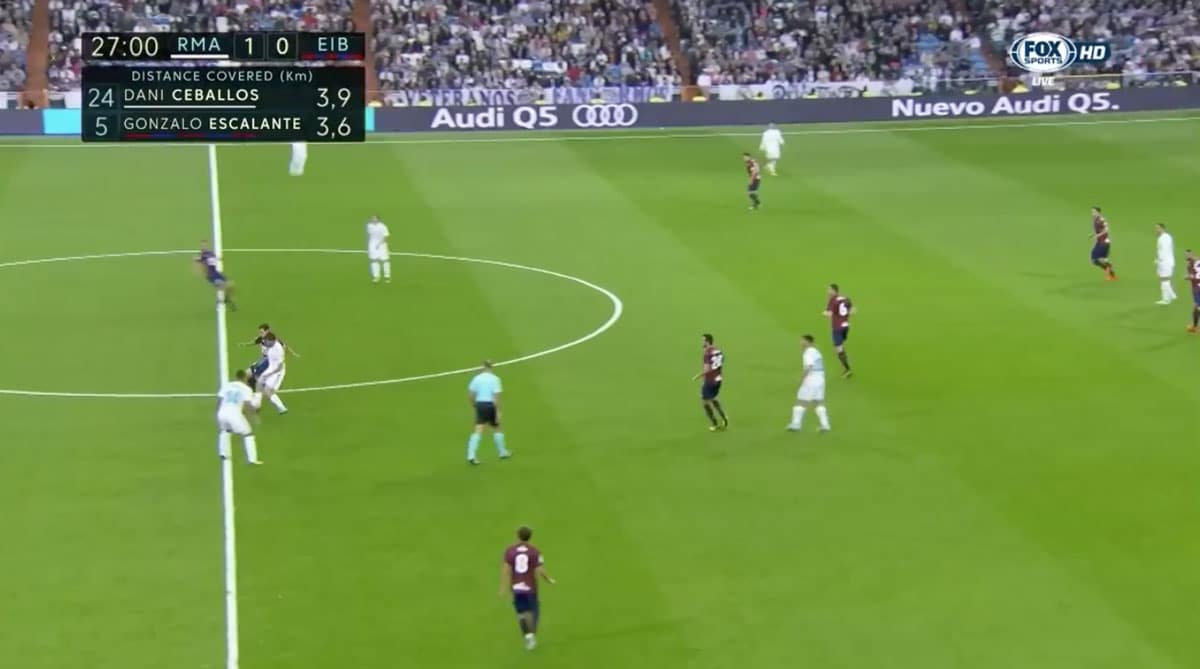 His close control and awareness can be seen in the glimpses of quality he’s shown for Real Madrid. In the stills above, you can see first how he receives the ball, before rolling the Eibar midfielder Joan Jordán and breaking free.

He then plays the ball into Casemiro, before moving up the pitch and finding his team-mate once more. Madrid go from a position on the wing in their own half to a dangerous position heading into their opponents’ half.

The midfielder isn’t all about dribbling and getting around well in tight spaces though. He knows when to pick the right pass, and can often get his team-mates into great goalscoring positions.

Ceballos’ former team-mate at Betis Rúben Pardo said: “Dani is a player with a lot of quality who makes everything easier for his team-mates. He always gives you the right pass so you can move the ball more comfortably. He makes everything simpler.” 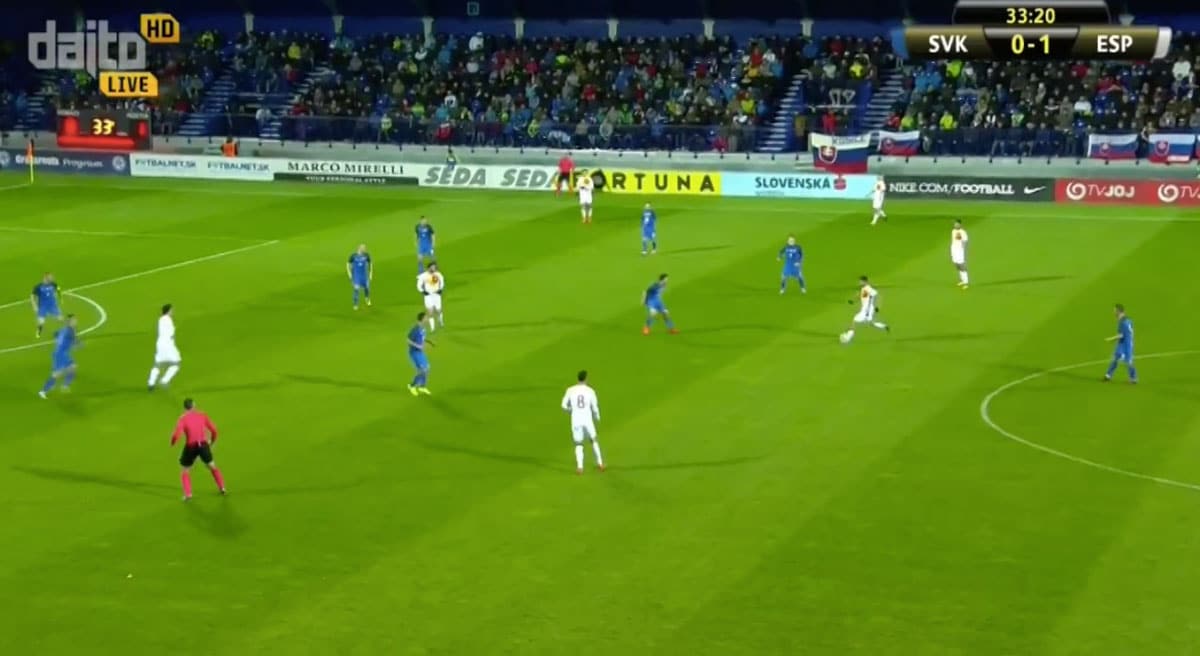 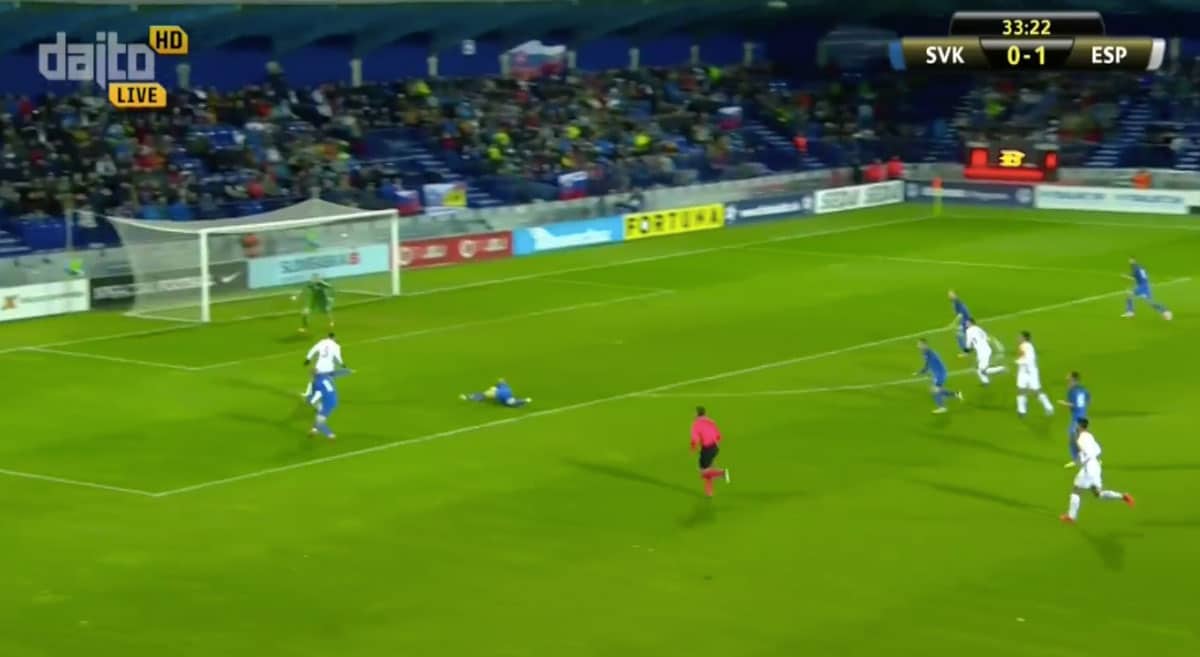 You can see in the above stills how the Spain under-21 international’s pass finds his man exactly against Slovakia. The second shot shows how the pass is inch perfect for him to get a shot away in the opposition penalty area.

What are Ceballos’ main weaknesses?

For a player who is involved in the opposition half, maybe more of a No.8 than a No.10, Ceballos’ goal return is poor. He managed just two goals in his two seasons in La Liga with Betis.

He may have two for Real Madrid in just two starts, but it’s hard to properly judge him based on playing just 293 minutes. That’s definitely a better return than at Betis, but perhaps he is starting to become more ruthless around the box – it’s what he needs to do make himself stand out in Madrid.

But, while he has been quiet on the pitch this season, he needs to make sure it stays that way. His off-field misdemeanours have got him into trouble before.

When Barcelona met Athletic Club in the Copa del Rey a few seasons ago, Ceballos tweeted: “I find the whistling of the national anthem a disgrace, A bomb needs to fall on the stands and kill all the Catalan and Bizcayan dogs.”

He’d also made more derogatory tweets relating to Catalonia, which was probably why he didn’t join Barcelona.

Separate comments made about former Madrid goalkeeper Iker Casillas were removed from his social media accounts last summer as his stock rose. While he has had no trouble publicly, there has been talk of fallings out with Zinedine Zidane behind the scenes.

It may be an unfair reputation, but any idea that Ceballos is trouble could put off potential suitors. 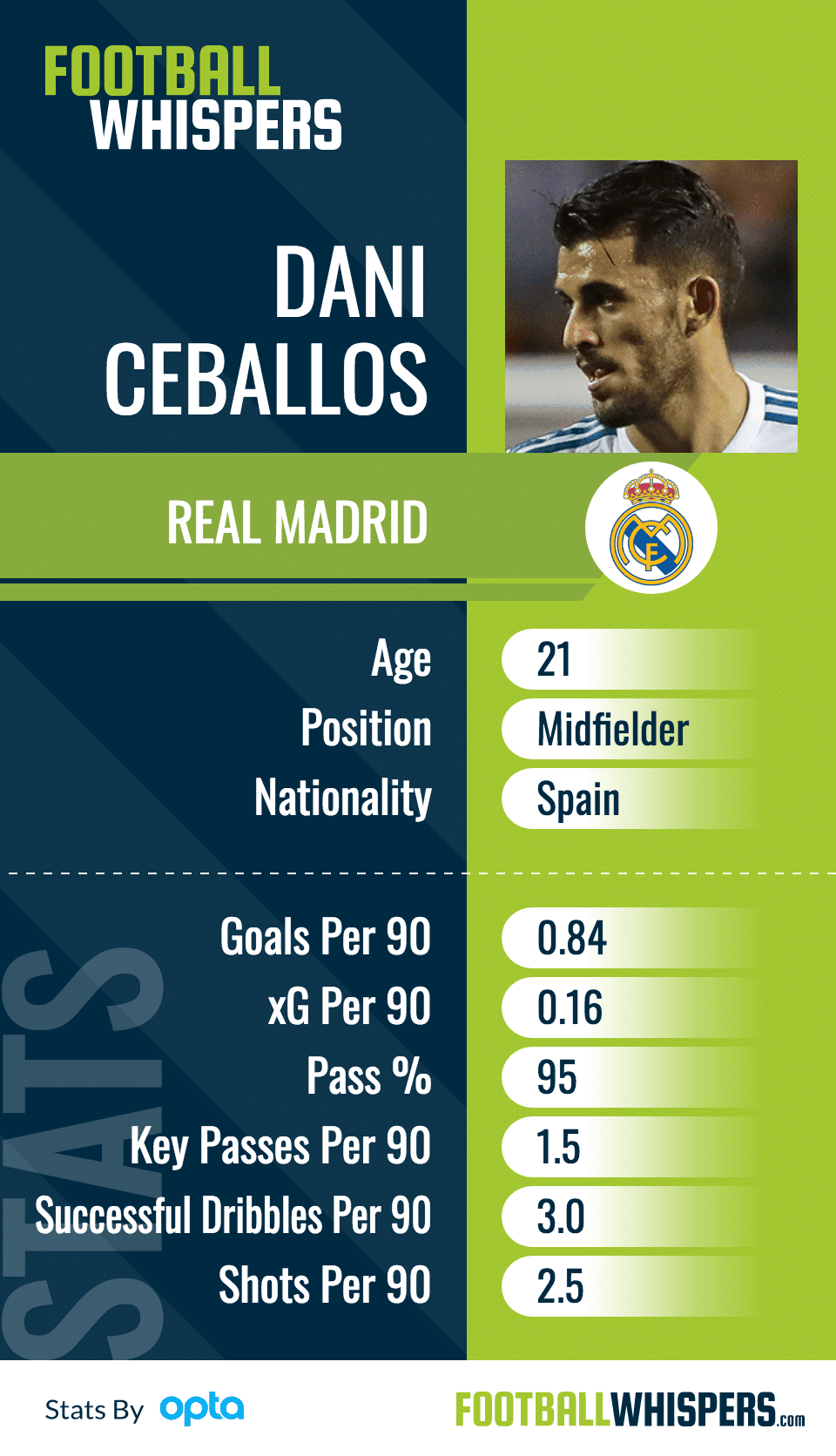 How much is Ceballos worth?

With Ceballos reportedly wanting out, his price may not be as high as possible. He will definitely cost more than the €17million Real Madrid paid for him last summer.

His buyout clause was put at €500million to avoid a situation where Barcelona could revive their interest and steal him like Paris Saint-Germain did with Neymar.

Los Blancos would clearly not demand that though, despite the fact that he will have five years of a six-season deal left this summer. Having been frozen out by Zidane, talk from Spain is that he would be available for around £32million.

When Danny Drinkwater and Tiemoué Bakayoko cost Chelsea £75million between them, £32million for Ceballos would look like a bargain.

It would be a real surprise should he not become one of the protagonists of next summer’s transfer market. Ceballos is undoubtedly a great talent, he just needs game time and that is unlikely to be something he will get at the Bernabéu.