Dani Ceballos has a special affinity with the Under-21 European Championships.

Those displays earned him a switch from Real Betis to Real Madrid and the midfielder rekindled the relationship on Saturday, crashing home a stunning effort from the edge of the penalty area as Spain were eventually beaten 3-1 by hosts Italy (below).

His timing could not have been better. With Zinedine Zidane returning to the dugout at Real in March, Ceballos' future is not in doubt. He simply does not have one at the Santiago Bernabéu.

“Zidane talked to me and was very clear about his plans. I accepted what he told me and my future will be decided when the under-21s are over,” Ceballos said recently.

“It’s tough when you don’t have the trust of your coach. I feel I am an important player for the Spanish national team and it’s a different feeling from the one I have in Real Madrid.”

Having picked up the bulk of his 23 La Liga appearances last term under Julen Lopetegui and Santiago Solari, Ceballos only appeared three times after Zidane succeeded the Argentine on March 11.

Despite his relative lack of football – just 17 league starts since leaving Betis – Tottenham Hotspur are reportedly interested. Which is fortunate because Real are keen on their talismanic midfielder Christian Eriksen who, with just a year to run on his contract, has announced his intention to leave the North London club.

That could mean a swap deal with Ceballos and cash exchanged for the Dane. 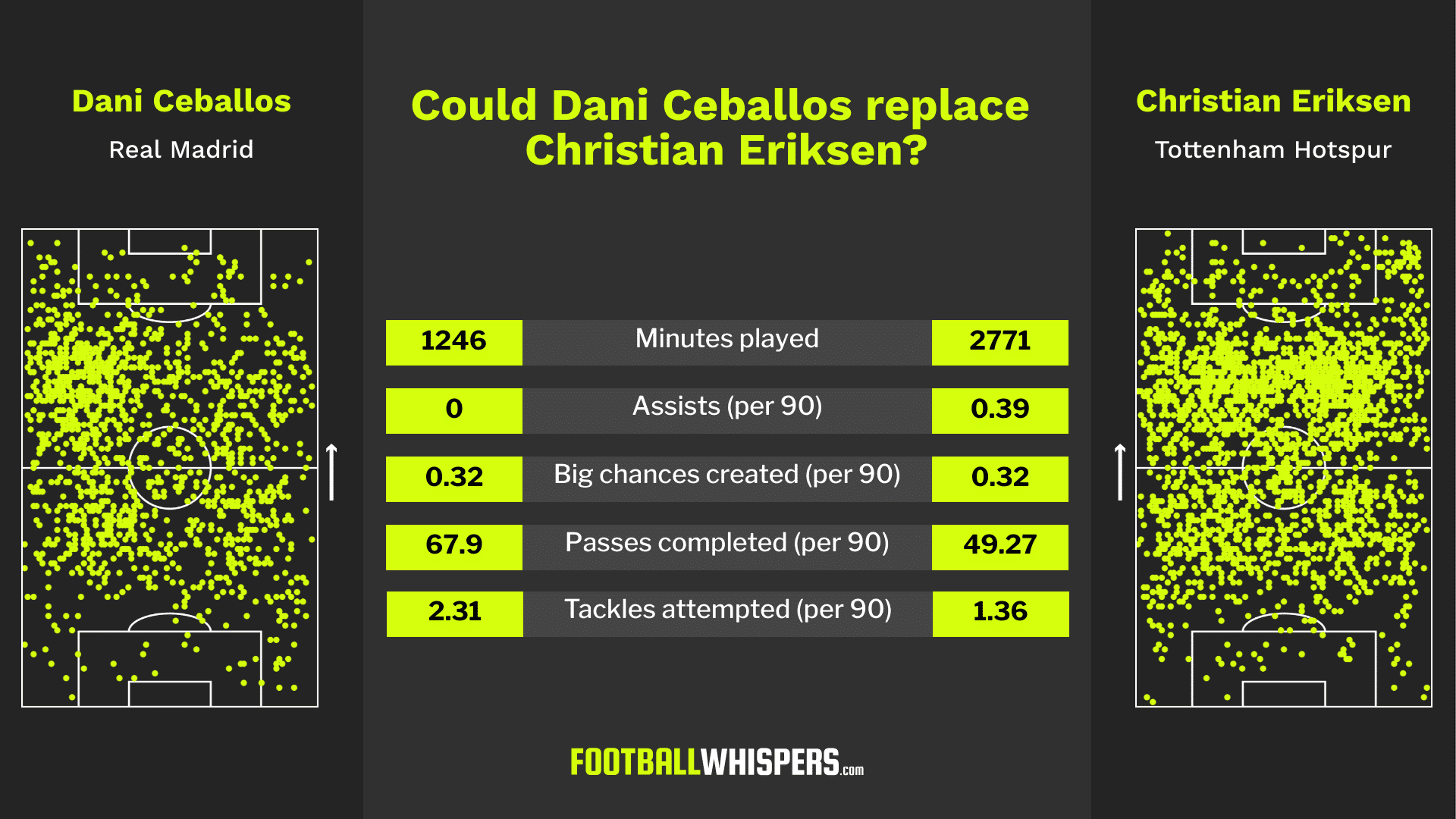 “I hope that something will be decided this summer. That is the plan. In football you never know when there could be a decision like that. It could be at any point. The best thing is always for it to happen quickly, but in football things take time.”

So could Spurs find a ready-made replacement for Eriksen in Ceballos? The simple answer is no. They are two very different players.

Using Football Whispers' exclusive Player Persona tool, which characterises players by their statistical traits, we can see the contrast between the two (below).

Eriksen has mostly operated as a No.10 for Mauricio Pochettino while occasionally playing out on the left or as a deep-lying creator. He is the link between midfield and attack and one of the very best in the business at that.

In the last three seasons, the former Ajax maestro has recorded 37 Premier League assists at a rate of 0.36 per 90 – the fourth-most of any midfielder in England's top flight. With 0.42 big chances created per 90, Eriksen ranks eighth among his peers.

He has also found the back of the net 26 times with 12 of those strikes coming from outside the penalty area. No-one has done that more frequently in the Premier League over the last three seasons. 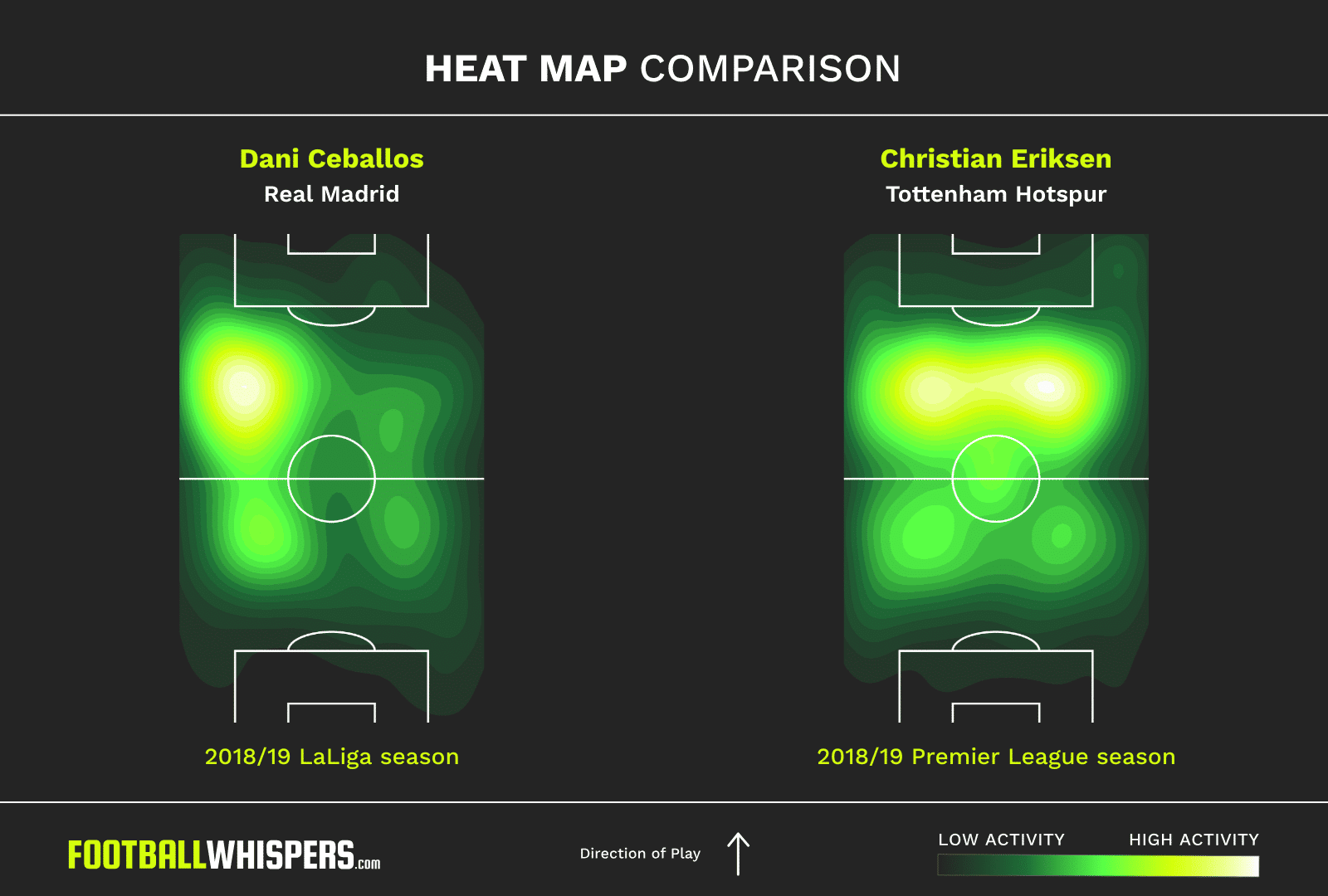 Ceballos, meanwhile, tends to operate in a deeper role with an emphasis on the left-hand side of the pitch – as depicted in his heatmap (above).

He is more of a roaming playmaker, getting involved in play deeper before driving forward to get his team up the field. The 22-year-old therefore carries the ball more frequently, attempting 2.31 dribbles per 90 and succeeding with 1.08. For context, Eriksen attempts only 1.16, completing 0.58.

The Spaniard is more tenacious as a midfielder and can do the ugly side of the game, too. Last season he attempted (2.31 per 90) and completed (1.51 per 90) more tackles than Eriksen while bettering the Spurs man's interceptions total too (1.15 vs. 0.55).

A direct replacement? Absolutely not. A good player? Yes.

In fact, there is a greater similarity between Ceballos and former Spurs man Mousa Dembélé who left the Premier League side for Chinese Super League outfit Guangzhou in January.

Tottenham have greatly missed the silky Belgian who, although blighted by injuries in the latter stages of his Tottenham career, was an often under-appreciated part of the midfield.

Returning to Football Whispers' Player Persona tool, we can see a very clear similarity between Ceballos and Dembélé having taken their data from the last three seasons.

Perhaps, then, Ceballos would help plug a gap which was evident for much of last season as Dembélé made just seven Premier League outings for Spurs before heading east. Victor Wanyama tried admirably to plug the gap while Harry Winks' own fitness issues left Pochettino short in the middle.

Spurs have not made a signing since the 2018 January transfer window. If they are finally to end that run then replacing a player as important to them as Dembélé seems like the logical step.

However, they must hope Ceballos' form for La Rojita does not attract unwanted interest from other clubs if they are to snare the Spanish schemer and end the long wait for a signing.