When Dani Alves returns to Barcelona with Juventus tonight, it will only further show what disastrous the decision to let him go was.

The Brazilian was a serial winner at the Camp Nou and will have a chance to show the Catalan club what they are missing.

He impressed in his current club’s 3-0 victory in the first leg and tonight’s match will be the first time the 33-year-old returns to Barcelona since his departure.

The former Sevilla man was an integral part of Barça’s dominances in Spanish and European football in recent years.

In eight seasons at the Camp Nou, he won 23 trophies, including three Champions Leagues and six LaLiga titles.

His great relationship with Lionel Messi also helped, providing 42 assists for the Argentine superstar – more than any other player.

Indeed, before the 2015 Champions League final over Juventus, Messi hailed Alves as the best right back in the world, saying: “It’s very difficult to find a player like him today.”

Yet, a year later, he left the Blaugrana on a free transfer, heading to Juventus.

And they haven’t replaced him.

There is no doubt Alves loved his time at Barcelona.

Indeed, in the pre-match press conference, he admitted it would be a special game for him.

“I am happy to be coming back to the Camp Nou, I’m returning home,” he said.

“I am a Barça fan, all I experienced here was incredible but I will have to leave that all to one side once the game begins.”

Dani Alves, what a man. if only Barcelona appreciated him as much as he clearly appreciates the club (not the board, though). pic.twitter.com/5qQN0z31Cx

But while the club may always hold a special place in his heart, it won’t be because of the board.

His flamboyant nature was often viewed as a lack of professionalism by the club’s hierarchy.

Alves filming himself pretending to be his girlfriend Joana Sanz and saying it was “just a game of football” after Barça’s Champions League elimination to Atlético Madrid did not go down too well.

And speaking in February, the Juventus man blasted the Camp Nou hierarchy following his departure.

“Leaving Barcelona on a free was a classy punch.

“During my last three seasons [at the club] they always used to say ‘Alves is leaving’, but the directors never said anything to me.

“They were extremely false and ungrateful. They did not respect me.

“I was only offered a new deal when the FIFA transfer ban came in.

“That was when I played them at their own game and signed a deal with a termination clause.

“Those who run Barcelona today have no idea how to treat their players.”

Even this week, he criticised his former bosses.

“The ego of certain people means I can never return to Barcelona,” the defender said.

“Their egos are huge and they'll never recognise how admit to what they made me feel.

“Everything was very beautiful here but in order to come back, Barcelona would have to rectify a lot of things their ego won't allow.”

A lack of a replacement for Alves

Although Alves says he will never return to Barcelona, his age means it would have been a bizarre buy anyway.

But there is no surprise that some want him back at the Camp Nou.

If you look at the Barcelona transfer rumours this summer, a lot of the players linked to the club are right backs or right wing-backs – Joao Cancelo and Héctor Bellerín have both been tipped for moves to Catalonia in the past few months.

And there is a simple reason for that: Alves has not been replaced.

The club decided to not sign a replacement, leaving Aleix Vidal and Sergi Roberto to fight it out for his place.

Vidal spent much of the season sidelined from the squad by coach Luis Enrique, and then when he won his place back and started to impress, he suffered a season-ending ankle injury.

Roberto, who has been converted from a midfielder, has had a mixed season.

He was ripped apart in the Champions League defeats to Manchester City and Paris Saint-Germain, but cemented his place in Barcelona history by scoring the goal that completed the historic comeback over the French side in the second leg of the last 16. 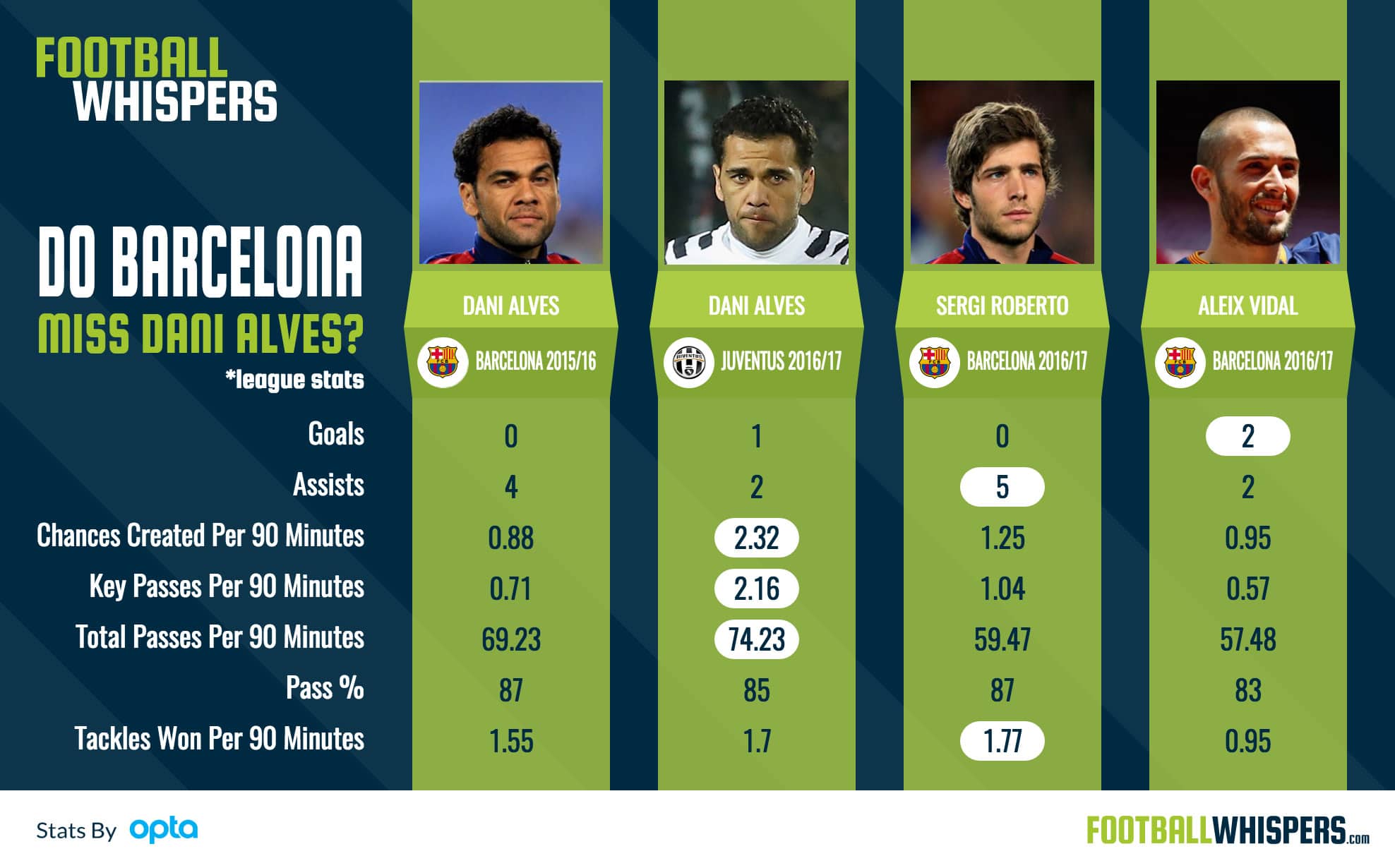 read more: aleix vidal: A cruel twist of fate for the barcelona full-back

If you look statistically, Roberto doesn’t stand up too badly to Alves.

His five assists so far this season in the league was more than the four the Brazilian got last campaign.

Yet if you compare him to this season, Alves at Juventus is flourishing, per 90 minutes creating 2.32 key chances, and making 2.16 key passes.

What’s more, he is more involved in the game, and that’s crucial.

The right-back options simply aren’t involved as much as Alves used to be, and perhaps it was because of that the role was abolished in the 3-4-3 formation tried out by Luis Enrique.

Despite his age, he has been hugely impressive with Juventus, and has perhaps looked more versatile than before.

When the Italian side play three at the back, he has played largely as a wing-back but has also filled in at the right of a back three (like César Azpilicueta does at Chelsea), or further forward as a winger.

And when Max Allegri opts for four at the back, Alves has played at right back.

For a free transfer, he’s more than proven his worth and he’ll undoubtedly want to make that crystal clear tonight to the club that let he left.