If Pep Guardiola and Lionel Messi are the most iconic coach-player duo in the modern era then Guardiola and Dani Alves must be the hipster's choice.

The former Barcelona boss has a full-back fetish. He turned the Brazilian into one of the best of all time and had a similar impact on Jordi Alba on the opposite side of the Blaugrana's back four.

In his next role at Bayern Munich, Guardiola turned Philipp Lahm into the ultimate utility man while reinventing the full-back position again. The German captain and fellow defender David Alaba were given licence to drive into midfield and flood the central section of the pitch.

Unimpressed with what he found at Manchester City, Guardiola binned Bacary Sagna, Gaël Clichy and Aleksandar Kolarov in one fell swoop, splurging more than £120million to bring Kyle Walker, Danilo and Benjamin Mendy to the Etihad Stadium in the summer of 2017.

Naturally, questions were asked. But Guardiola was vindicated as City swept all before them to win the Premier League in the most swashbuckling fashion imaginable with full-backs to the fore. They retained their title in 2018/19 and will be favourites to do so again this term.

But, according to reports, Guardiola is seeking to improve on his options at full-back by bringing former charge Alves to the Premier League.

The inimitable Brazilian has conquered Spain, Italy and France during a glittering career which last weekend saw him become the first player to lift 40 major honours after captaining the Seleção to their first Copa América title since 2007.

After two seasons in the French capital with Paris Saint-Germain, the 36-year-old is on the look-out for a new adventure. The chance to pick up a league winners' medal in a fourth major European league while getting the band back together could prove hard to turn down.

But at 36 and with a serious knee injury not too distant in the rear-view mirror, is 2019 Alves the player City should be signing to give Walker competition at right-back? The champions have already been heavily linked with Juventus' Portuguese flyer João Cancelo this summer with Danilo set to exit the Etihad.

Even at a reported £50million, the 25-year-old offers a far better long-term investment than Alves, who will not come cheap thanks to sizeable wage demands and the fact that, as a free agent, he will be able to demand a decent signing-on bonus. 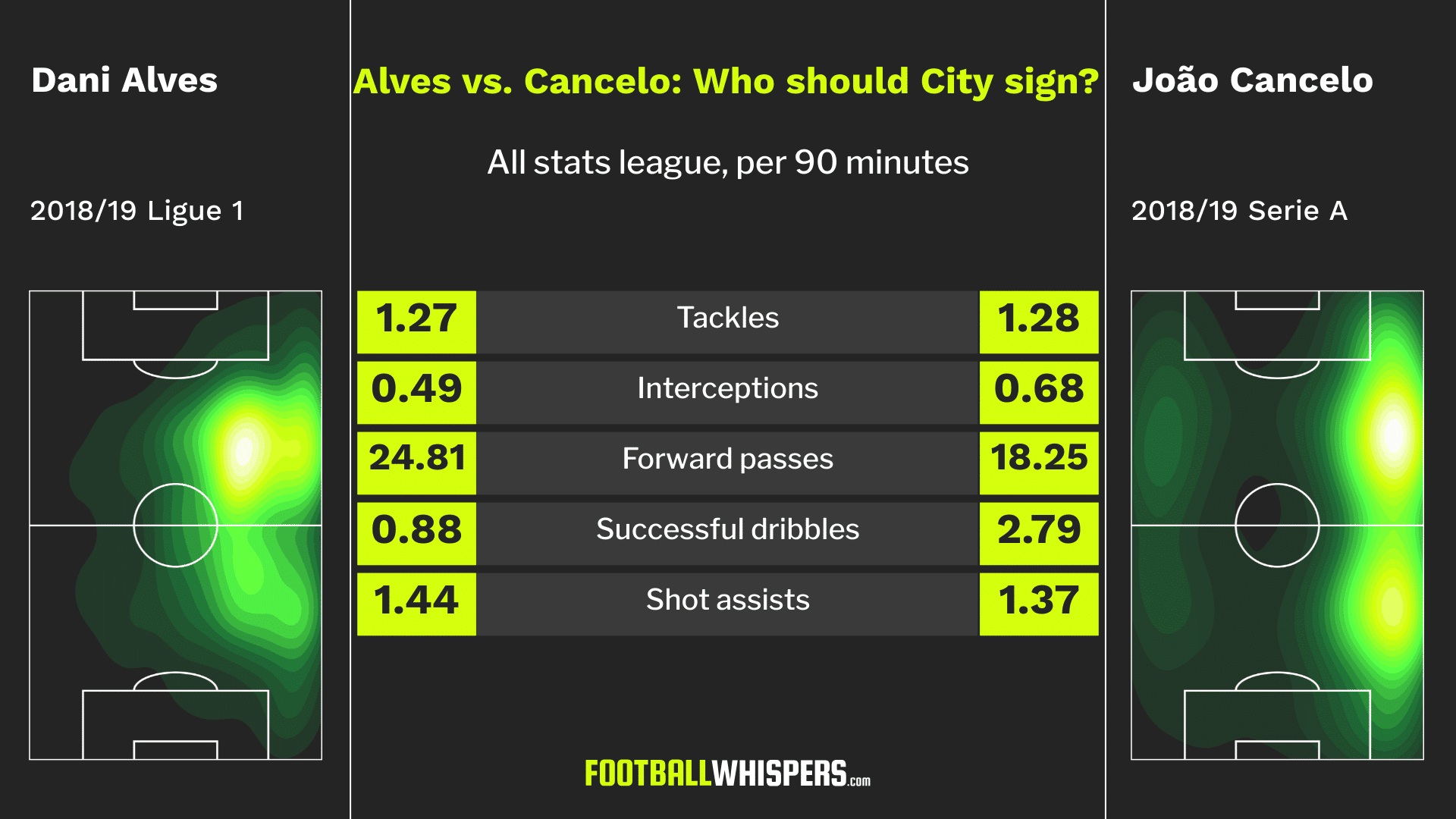 At first glance, there is little difference between the two. But comparing players from different leagues is fraught with danger, even if PSG and Juventus were the dominant sides in France and Italy last season, Serie A is a far stronger league.

The biggest difference between the two is seen in their respective heat maps, although this will be skewed by the fact the Brazilian was used a right winger and also in midfield on occasion last season.

While Alves tended to play in central areas – clearly Guardiola's coaching is not easily forgotten – Cancelo got into deeper areas with more penetrative runs. Alves came out on top for completed passes (68.84 per 90), passes completed in the opponents' half (44.86) and forward passes (24.81).

There's little question that, right now, Alves remains a better fit for Manchester City even if Cancelo's ceiling is higher thanks to his youth. But is Alves the player he was during his Barça, or even Juventus, days?

Taking data from his one season in Serie A with the Bianconeri (2016/17) and comparing it to last term we can get a clearer picture of how his game has changed in the last three years. 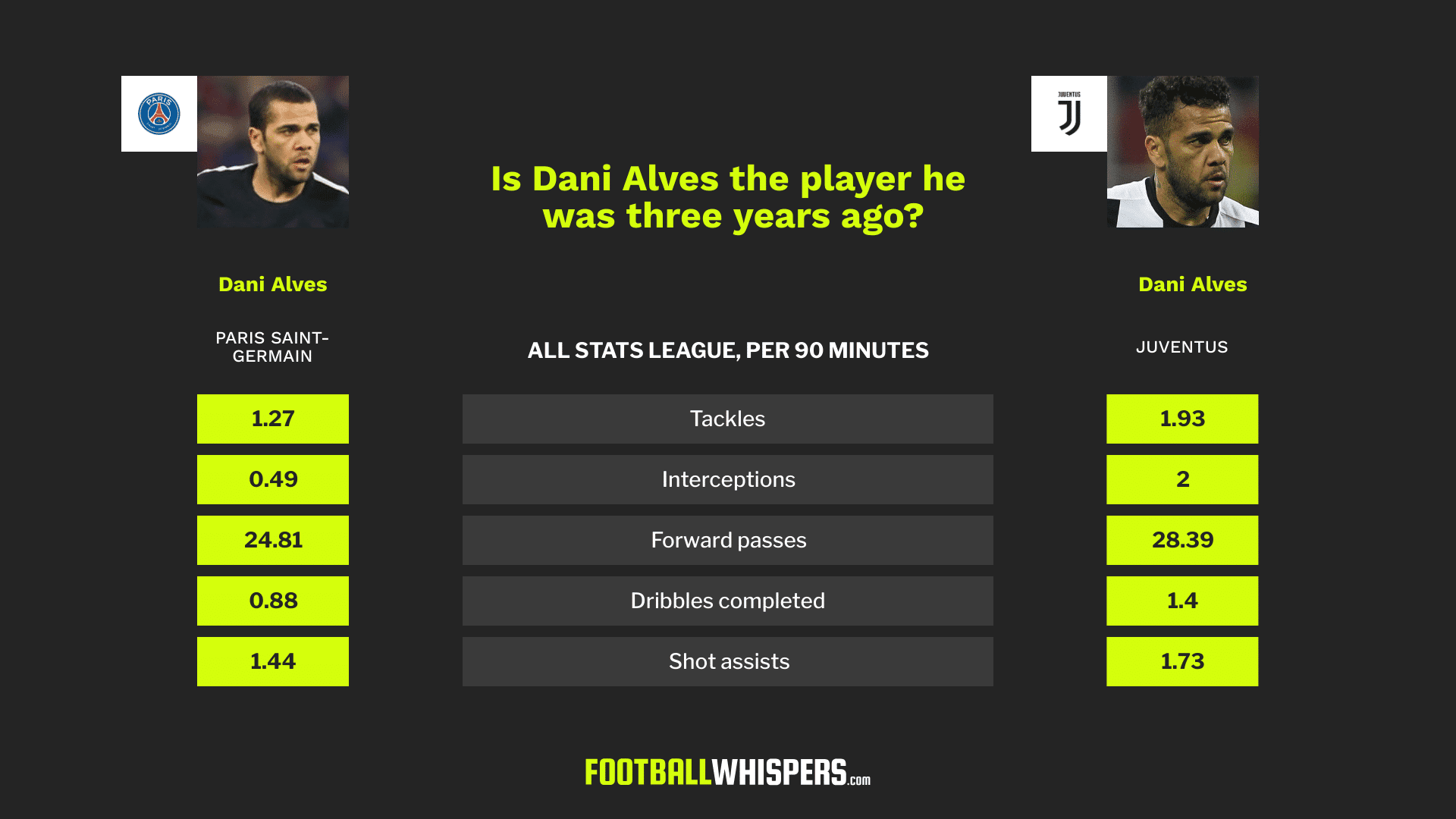 Immediately it's clear Alves is a player on the decline. In each metric above there is a clear drop-off in the Brazilian's performance. That could be down to the fact he is now playing in a less competitive league and in a PSG team who are stylistically different to Juventus, but it's hard to ignore the fact he's now three years older.

Not that his time in Turin was an unqualified success. In the first half of the season, Alves struggled with form and fitness. It was only after the winter break that things clicked for the former Sevilla man and he eventually won a place in the Serie A Team of the Season.

But seasoned observers recall his season somewhat differently, as does Alves.

“I've spoken about it with my teammates – I joined Juventus also to prove to Italian football that it could improve and raise its level,” he told Sky Sports Italia. “I just wasn't understood. I wanted to do something more, but I felt that it wasn't easy for me.

“I wasn't happy like I was used to being and this cost me a lot of effort. This is why I chose not to continue.”

All that said, there are still pros to signing Alves. He is a proven winner and he knows Guardiola's style of play and coaching inside out. Just don't expect him to be the player he was at his Barça best.