If at first you don't succeed, try, try again. Twelve months after raiding Borussia Dortmund for Sokratis, Arsenal are chasing another Die Schwarzgelben player in an attempt to solve their defensive woes: Dan-Axel Zagadou.

Sokratis did little to plug a porous Arsenal backline in the first year of Unai Emery's reign as the North Londoners conceded the same number of goals (51) as in the final year of Arsène Wenger's tenure.

A defensive clear-out is long overdue at the Emirates. Captain Laurent Koscielny has had more than his fair share of injury concerns in recent years and, at 33, looked some way past his best last season. Reports claim the Frenchman could return to his homeland with Lyon offering a two-year deal.

The less said about Shkodran Mustafi the better. Inexplicably a £35million signing from Valencia in the summer of 2016, the German has been a catastrophic signing. Yet, owing to the Gunners' lack of resources, Emery has little choice but to stick with the calamitous centre-back and re-affirmed his commitment to the World Cup winner at the end of last season.

Calum Chambers will return from a season-long loan spell at Fulham, most of which was spent in midfield, while Rob Holding, one of the few defensive bright spots last term, had his 2018/19 curtailed by a knee injury suffered against Manchester United in December. 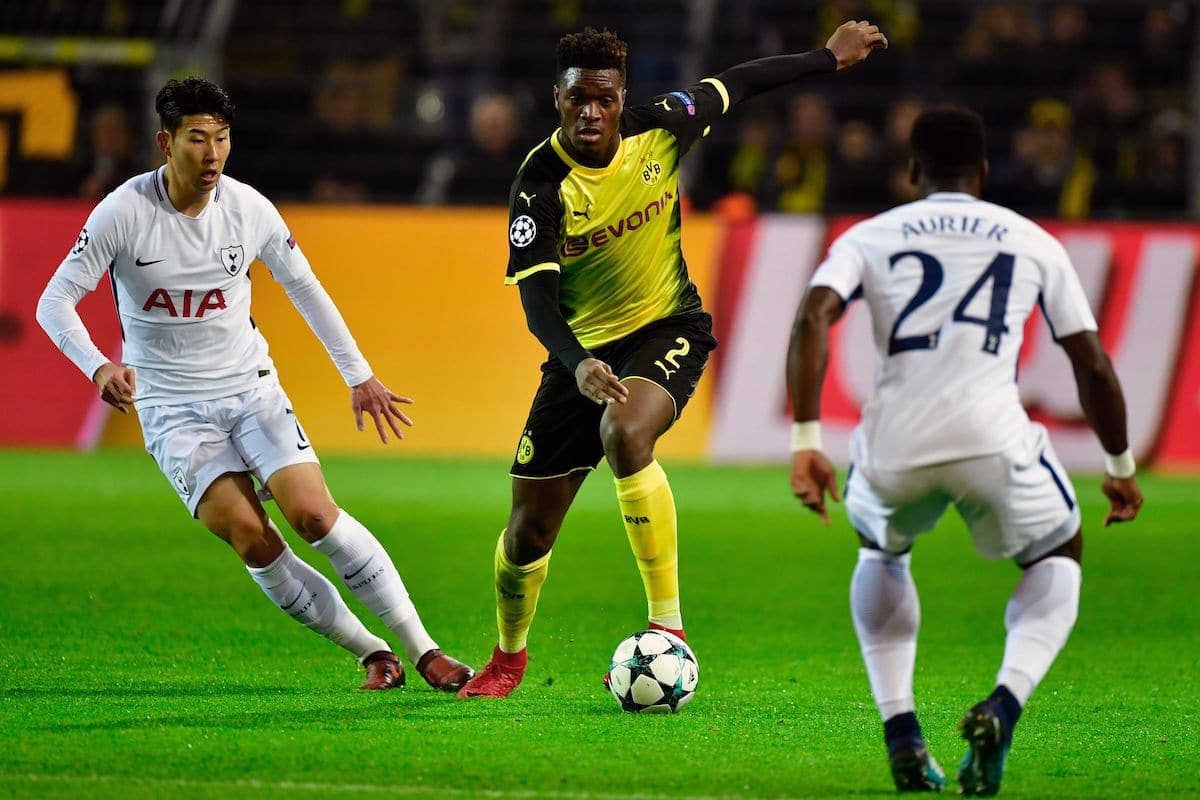 All that taken into consideration, it's little surprise Emery has put a central defender near the top of his summer shopping list. What might be more surprising is the identity of one of his targets: Dortmund prospect Zagadou.

The Frenchman is only 20, for a start, and with just 39 league appearances under his belt does not scream ‘seasoned centre-back'. But that is the reality for Arsenal after failing to secure a lucrative return to the Champions League.

According to German tabloid Bild, Zagadou has told Dortmund he wants to leave after playing second fiddle to Manuel Akanji and Abdou Diallo last season. His prospects of regular minutes will not have been helped by the big-money return of BVB favourite Mats Hummels.

Available at a reported £27million, he does not, however, come cheap. A figure of £45million has been bandied around by way of a transfer budget – a meagre sum for a side desperately trying to regain a place in the Premier League's top four.

So what would Zagadou bring to the Emirates Stadium? 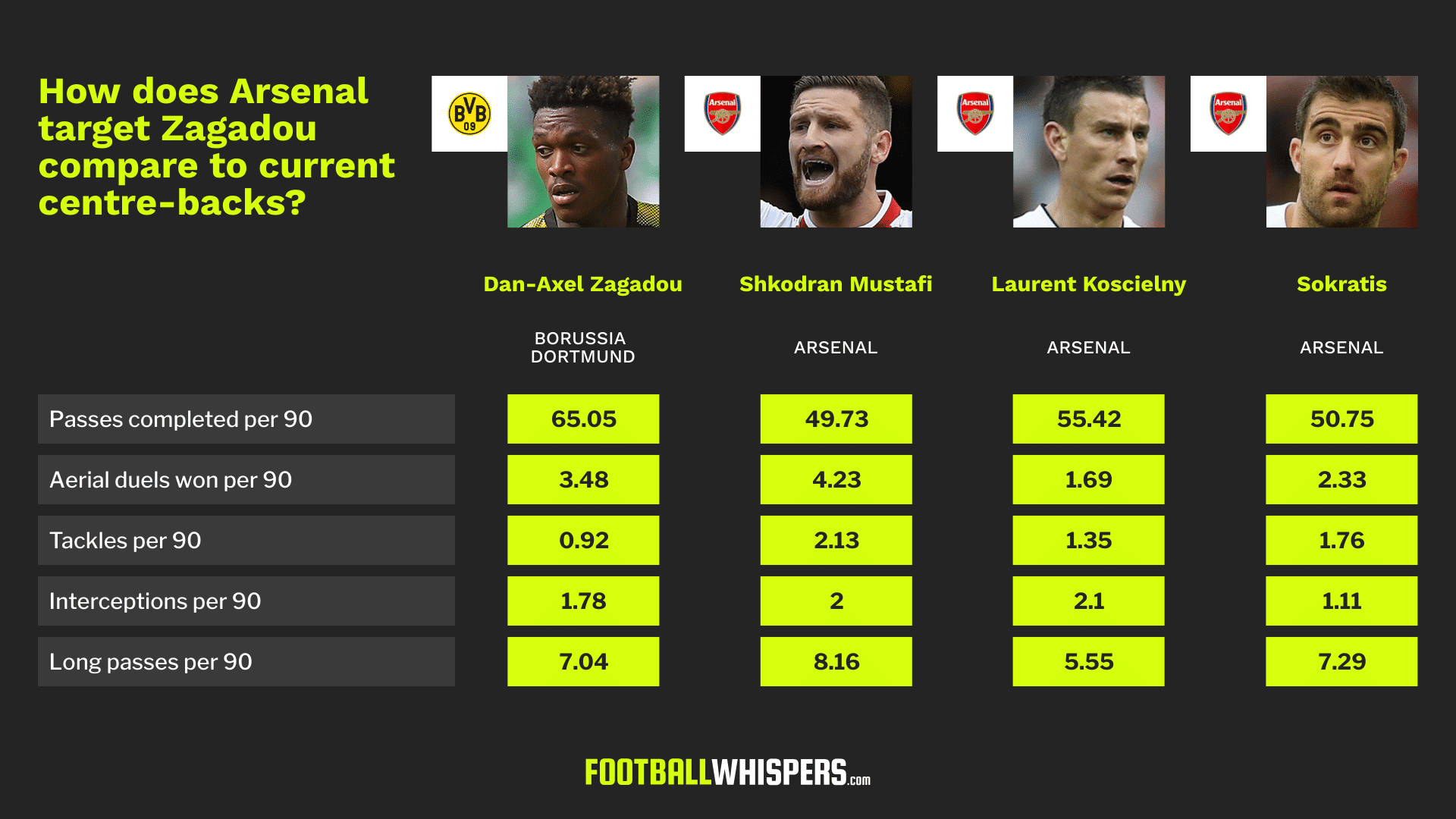 Standing at 6ft 5ins, the most obvious thing is his physical attributes. Tall, powerful and good in the air, the French youth international won 3.48 aerial duels per 90 in the Bundesliga last season – the 13th-most of any defender.

Perceived wisdom says central defenders fit into one of two camps. Stoppers, who are physically domineering and can head or kick danger away for 90 minutes. Or sweepers, who tidy up and play the ball out from the back.

But Zagadou can do both. He was ninth among Bundesliga centre-halves for attempted passes last season (74.07 per 90) and 12th for completions (65.04 per 90) giving him an overall pass accuracy of 87.8 per cent.

That is important because while the Gunners aren't as pass intensive as they were under Wenger, they have not completely abandoned that style of play and still ranked fifth for completed passes per 90 last term with 456, while the average duration of their possessions was 12.83 seconds, also fifth.

Any central defender Emery signs must be comfortable playing out from the back and Zagadou ticks that box. His passing is not limited to simple square balls either. He was 11th among his Bundesliga peers for forward passes (25.09 per 90) and completed 25.37 passes in the opposition half per 90.

Using data from Football Whispers' Lab, we can see that while Zagadou was no stranger to passing the ball inside to his right, he also attempted – and completed – a healthy number of more progressive forward passes. Judging by the direction, we can assume the bulk of these were out to right -back. 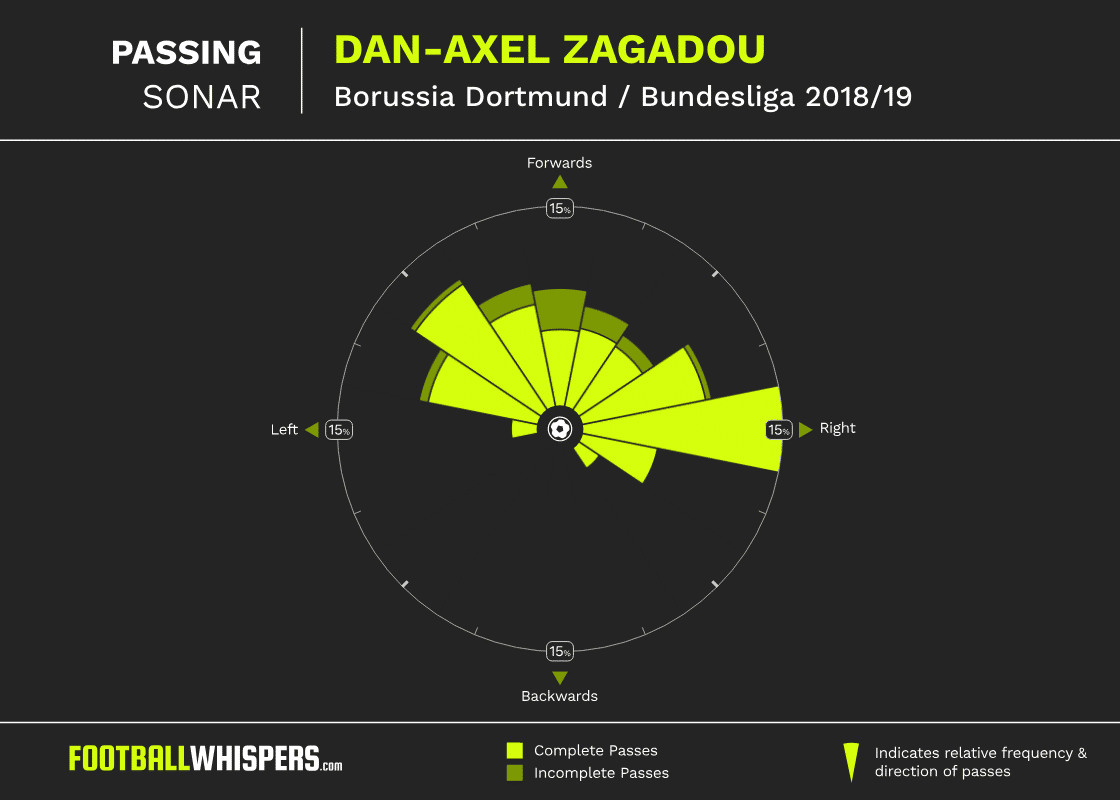 A good one-on-one defender who – despite his frame – is no slouch, Zagadou's reading of the game and positioning are largely strong points too. He is, as is the case with any young defender learning his craft, prone to the odd lapse in concentration, though.

For example, in Dortmund's chastening 5-0 defeat to rivals Bayern Munich in April he passed the ball straight to Robert Lewandowski, allowing the Polish hitman to race on, lob the ball over onrushing keeper Roman Bürki and volley home the Bavarians' second inside 17 minutes. Three more followed as the title slipped from BVB's grasp.

He'd clearly not recovered a minute later, switching off entirely at a throw-in to allow Lewandowski the space to spin into the Dortmund penalty area and get an effort off which Bürki had to push around the post. 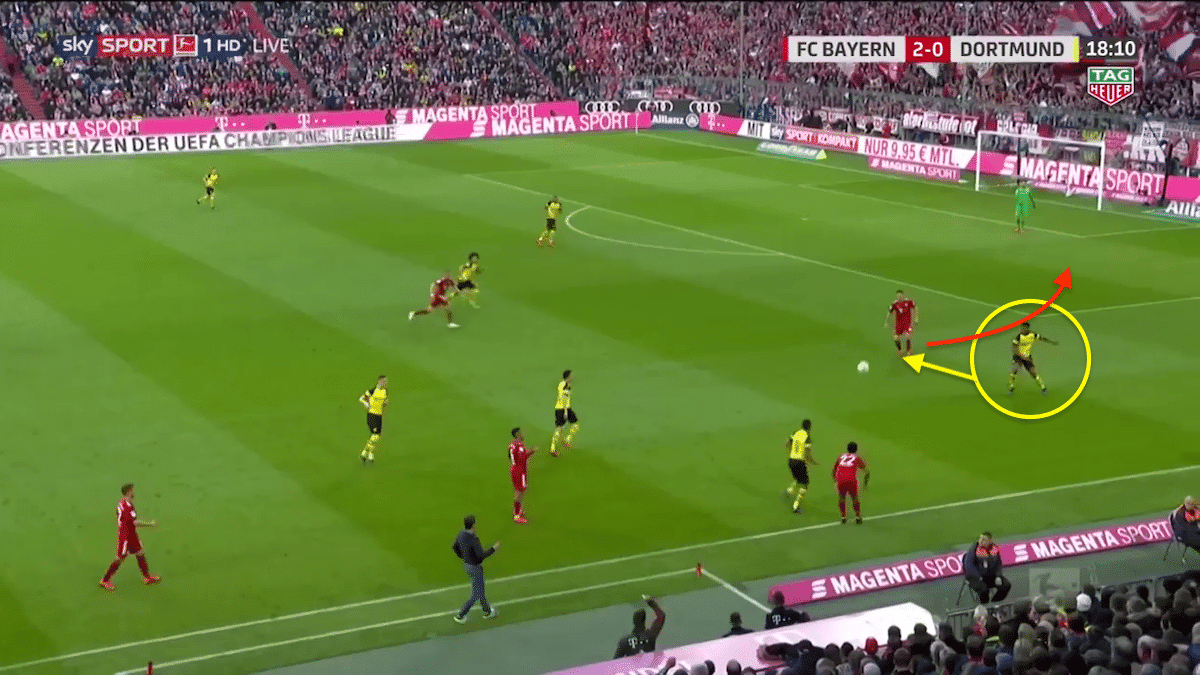 In short, it's the kind of mistake a 20-year-old defender with 50 club starts makes. But, like it or lump it, that is the market Arsenal have to shop in until they return to the money pit that is the Champions League.

Thanks to the riches in European football, even players with those shortfalls cost a serious amount of money nowadays. An established centre-half with hundreds of games behind him could easily cost twice that – see Harry Maguire, who will reportedly cost £100m, enough to put Manchester United off.

But if the Gunners can show patience with Zagadou and Emery can refine some of the rougher parts of his game, they'll have a gem on their hands.