There are, reportedly, a number of key positions Manchester United manager José Mourinho has earmarked for reinforcement this summer.

The Red Devils, who finished second in the Premier League in 2017/18 and lost out to Chelsea in the FA Cup final, are set to back their manager in the transfer market once again, with the Portuguese said to be intent upon adding at least one midfielder, a centre-back and a full-back on each side.

Last summer, Mourinho made clear his desire for four new additions, while only three arrived, missing out on a wide attacker until Alexis Sánchez was signed from Arsenal in January. It remains to be seen whether the Old Trafford boss will be furnished with all the incomings he hopes for this time around, but reports suggest United's recruitment drive is off to a solid start, with the arrival of Diogo Dalot imminent.

As champions Manchester City close in on highly regarded Napoli midfielder Jorginho and Leicester City's Riyad Mahrez, and with Liverpool having moved swiftly to snap up Fabinho, while working to seal a €60million move for Nabil Fekir, United fans could be forgiven for looking enviously across to their rivals, hardly salivating at the prospect of a 19-year-old full-back.

What's more, Dalot, whose €20million contractual release clause with Porto United are said to be on the verge of triggering, only has a handful of senior appearances under his belt and is believed to be viewed as an understudy to incumbent Old Trafford right-back Antonio Valencia.

For those craving instant upgrades in United's positions of weakness, this move doesn't exactly whet the appetite. However, those who have seen Dalot extensively believe he is a young prospect of the highest order, and will soon usurp Valencia, who will turn 33 before the new season begins, making the right-sided defensive berth his own; his impact is unlikely to be instant, but his qualities will soon become apparent. 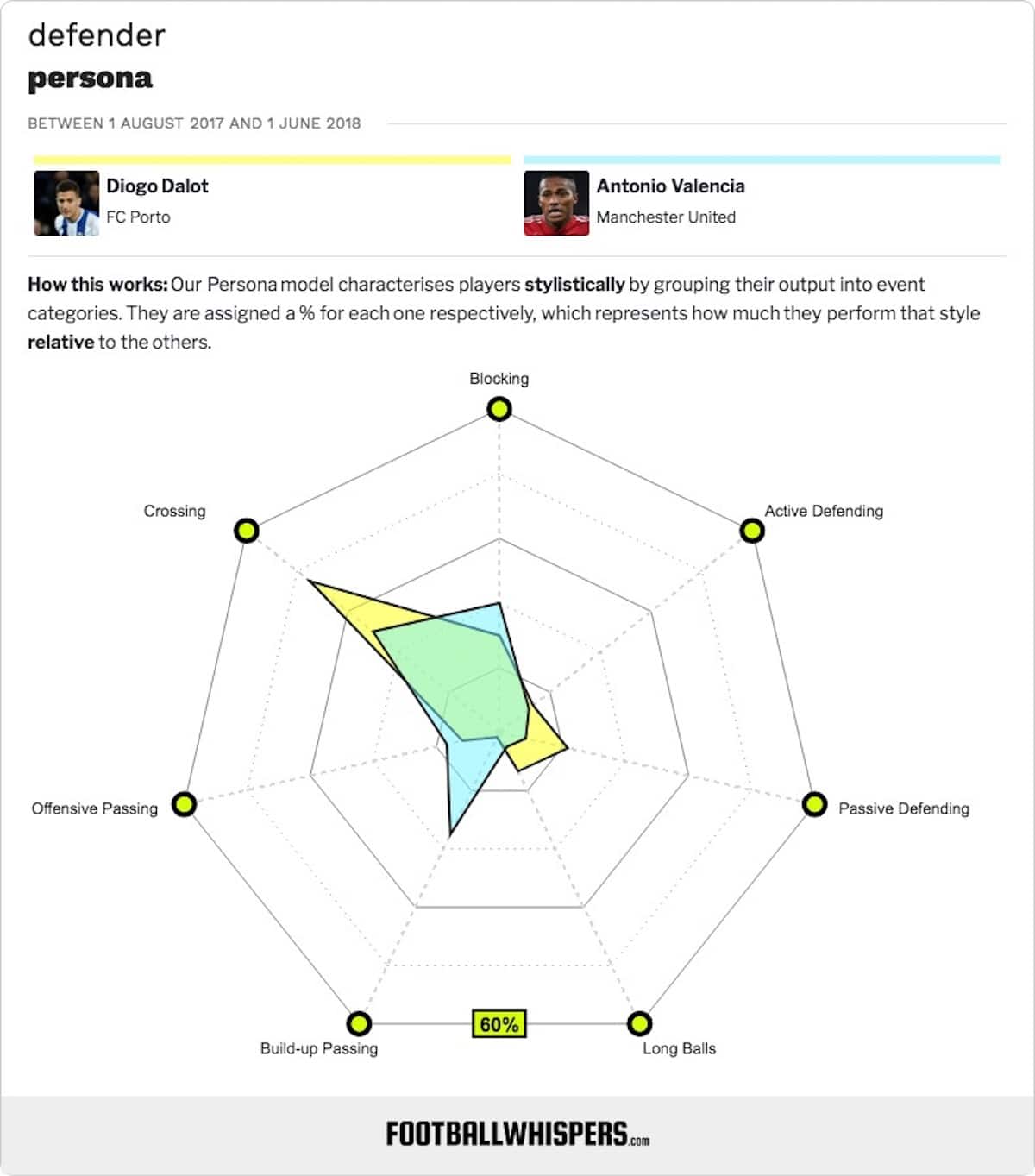 In discussion about Dalot, Portuguese football expected Tiago Estêvão was effusive in praise of the youngster's potential. “For the two to three years that I've watched him, I've considered him Portugal's brightest prospect,” he said.

“I think he has everything to be a top-tier full-back in the future. I think the best way to put it is, barring injury, I don't see a scenario in which he doesn't turn out at least a very respectable-level right-back, which is just about the best you can say of a 19-year-old.”

One of the main points of contention many United fans have with Valencia is, despite his roots as an orthodox winger, the Ecuadorian, perhaps due to an inability to get up and down the flank as readily as years past, is not enough of an attacking threat from wide areas.

With such narrowness in the final third due to their wide attackers tending to drift centrally, United often rely on their full-backs for width, meaning Valencia's aversion to overlapping and crossing renders the Red Devils easily contained.

In this regard, Dalot would represent a significant upgrade. With just 408 minutes of Liga Nos action under his belt, the sample size on the 19-year-old is small, but his tendencies are clear. As the above Player Persona radar illustrates, crossing accounts for a bigger part of his overall game that it does Valencia.

Filling in for Brazilian Alex Telles, Dalot's first-team opportunities in 2017/18 came at left-back, with the youngster demonstrating a useful versatility, and the boldness to remain aggressive defensively and ambitious in attack despite playing on his weaker side, crossing well with either foot.

He is much more comfortable on the right side of the backline, however, where he has featured regularly for Porto's B team – contributing two goals and three assists this season – and at youth level with Portugal. 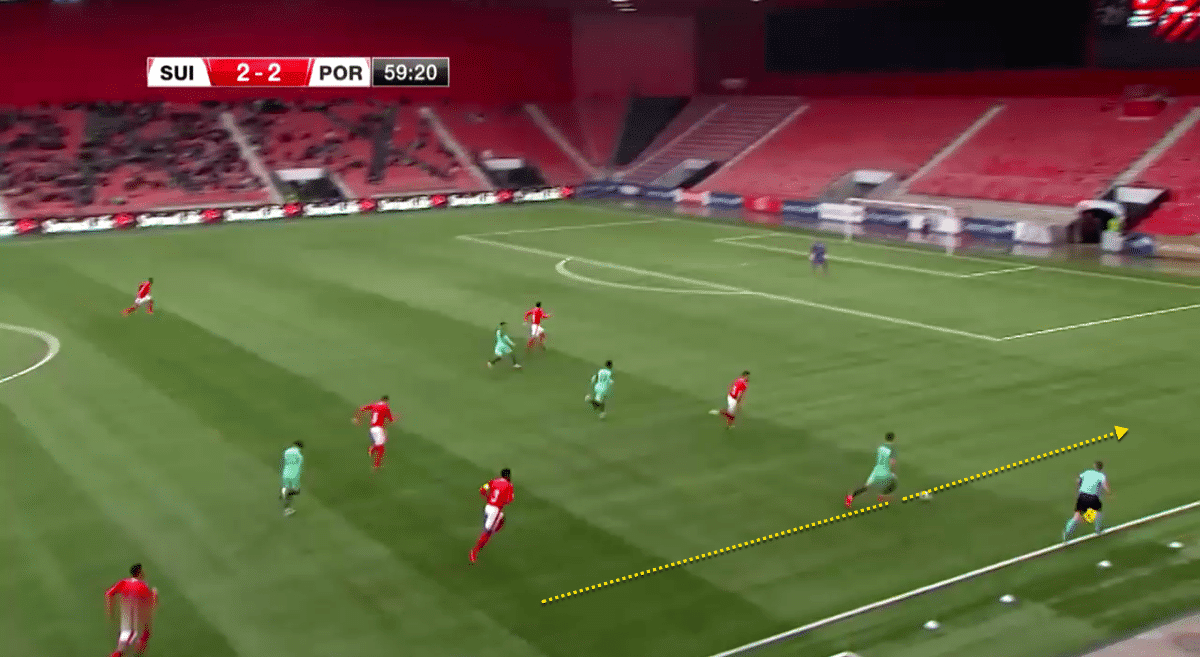 Here, we see the teenage full-back's ability to break forward in full effect, taking on Switzerland's under-21s with Portugal. Identifying open space on the right flank, the fast and athletic defender pushes forward without hesitation. 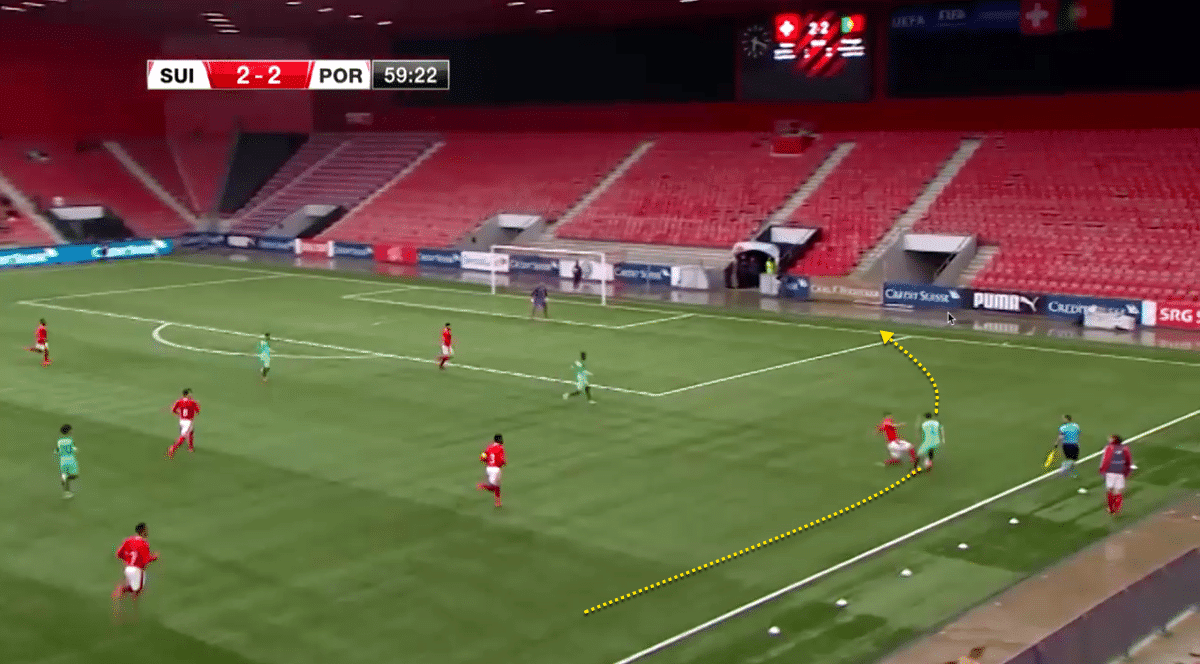 He then easily skips away from the challenge of the on-rushing opponent, maintaining impressive balance throughout and continuing his progress, arcing his run goalward to allow for a more-open crossing angle. 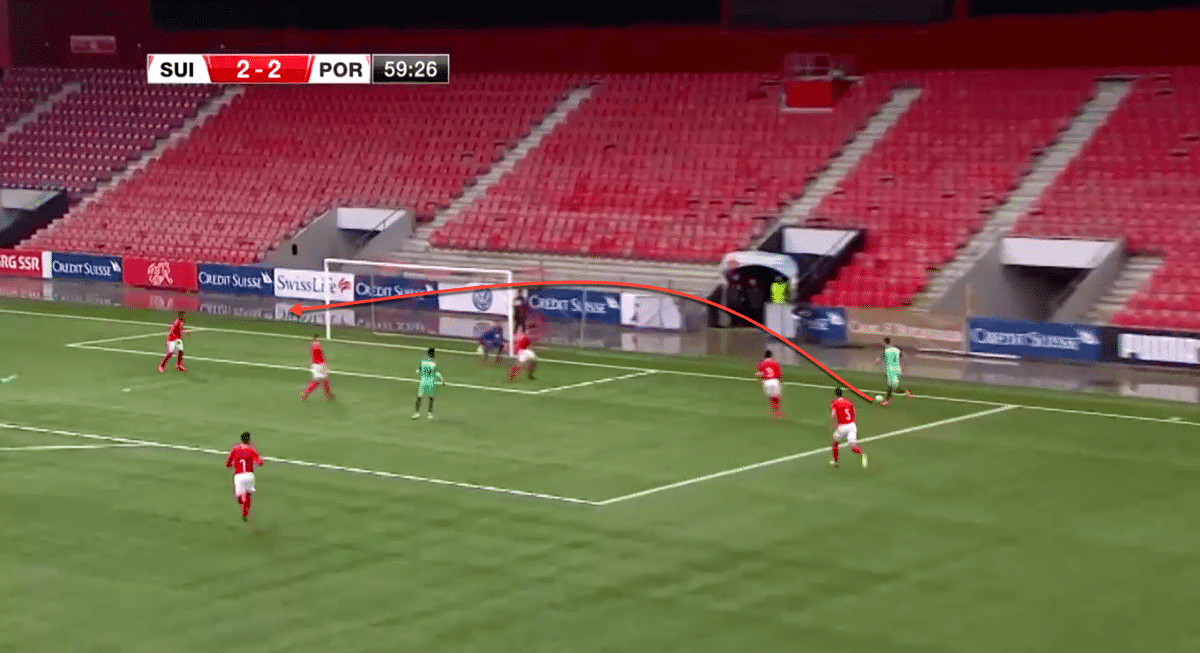 He then composes himself, raises his head and lifts a delicate, inviting cross toward the far post, demonstrating a level of comfort in attacking areas, without the appearance of being rushed that often betrays full-backs so high up the pitch.

Dalot does not always look to hit the byline before crossing, though. Instead, he is just as threatening when crossing from deeper positions, backing his technique to send swirling deliveries into the danger zone. 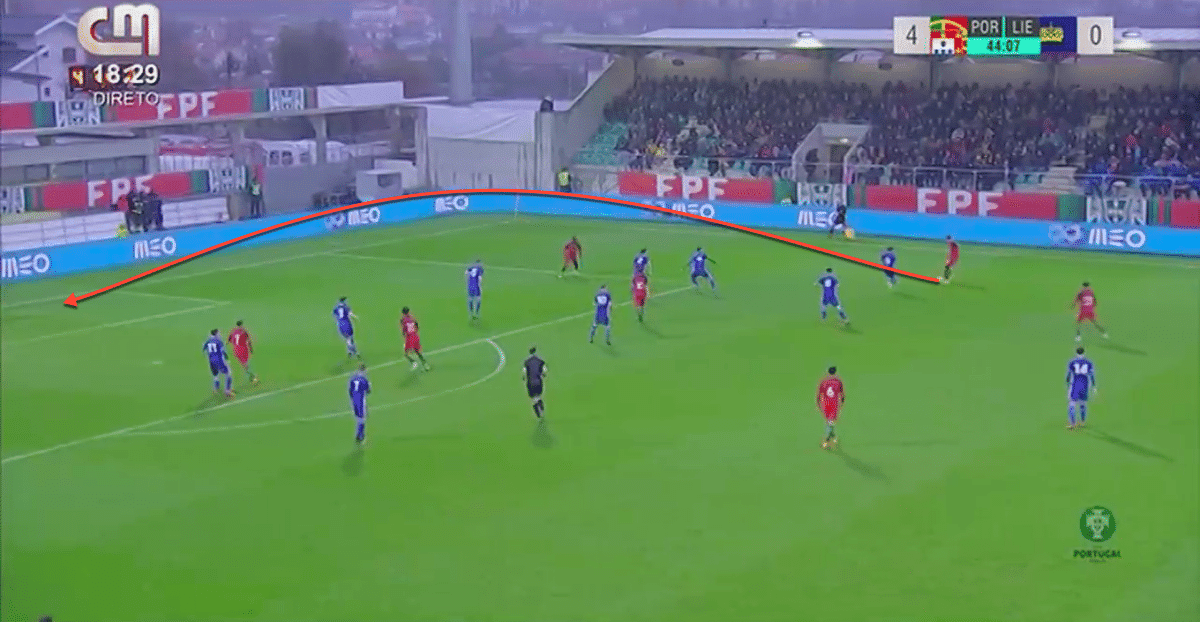 Above, we see an example of his willingness to cross from deep, in action for Portugal Under-21s against Lichtenstein. Having found a small pocket of space for himself, he needs just one touch to steady himself before quickly releasing an early ball into the box – this kind of delivery, if his United move does indeed materialise, would make excellent use of Romelu Lukaku's aerial skills.

While most modern full-backs concern themselves primarily with their attacking duties, Dalot possesses a very balanced skillset. Watching the 19-year-old in defensive one-v-one situations, it is readily apparent that he is a natural defender: aggressive yet controlled, tenacious without being reckless. Used to converted wingers on either side of their defence, having a specialist full-back might feel like a rare luxury for United. 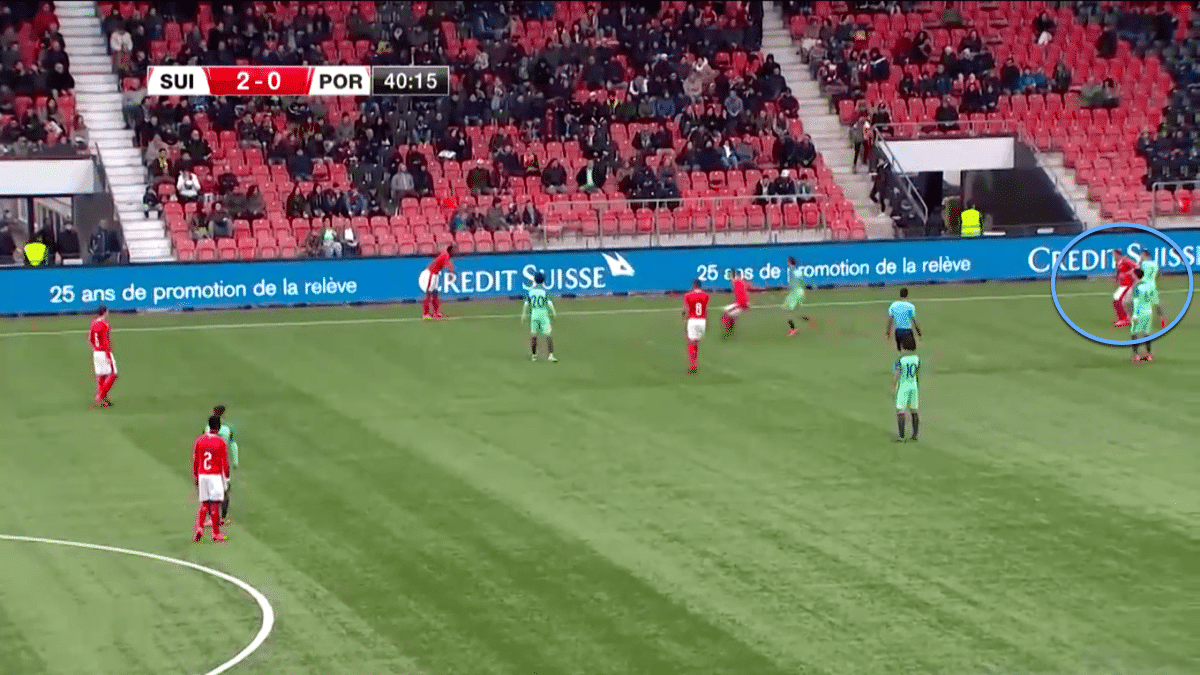 In the above image, taken from the same under-21 game for Portugal against Switzerland, we see how Dalot appears to relish the physical challenge of defending one-v-one – which, standing 6ft and athletically built, he is well equipped for.

As the Swiss restart the game with a throw-in, Dalot (circled) tightly marks his designated opponent, preventing the attacker from receiving the ball in space. 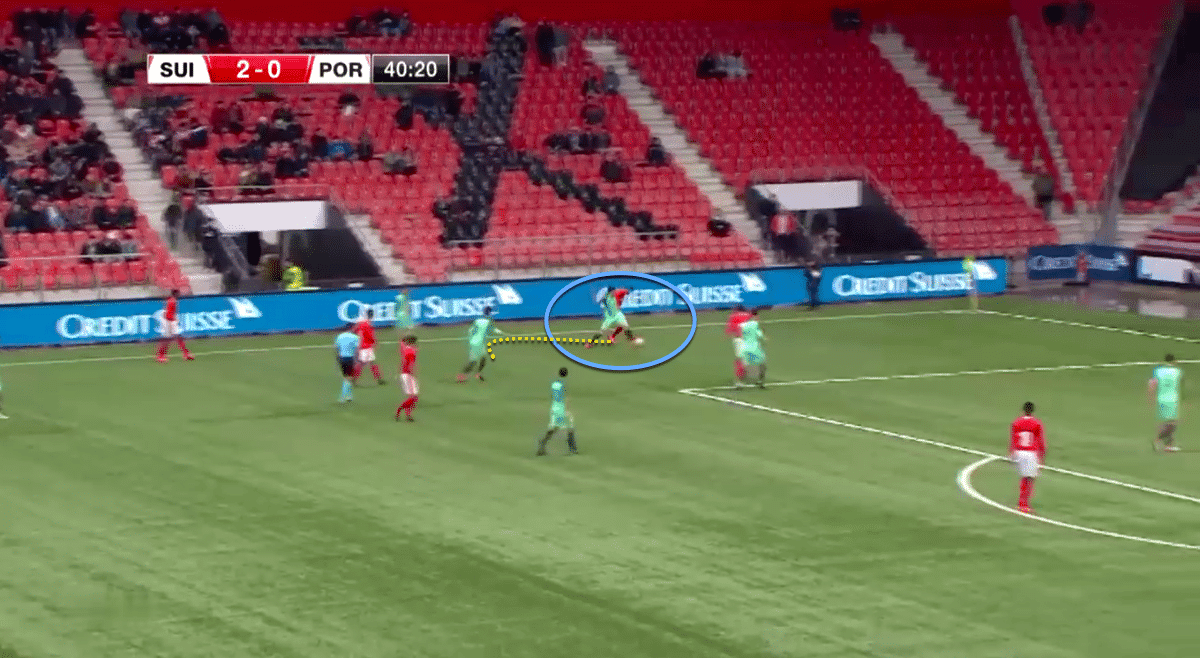 Then, when the Swiss player attempts to turn and break free down the flank, Dalot diligently sticks to his task, outmuscling his man and cleanly winning possession, before then being awarded a pressure-relieving free-kick after being tugged back by the player he has just robbed of possession. 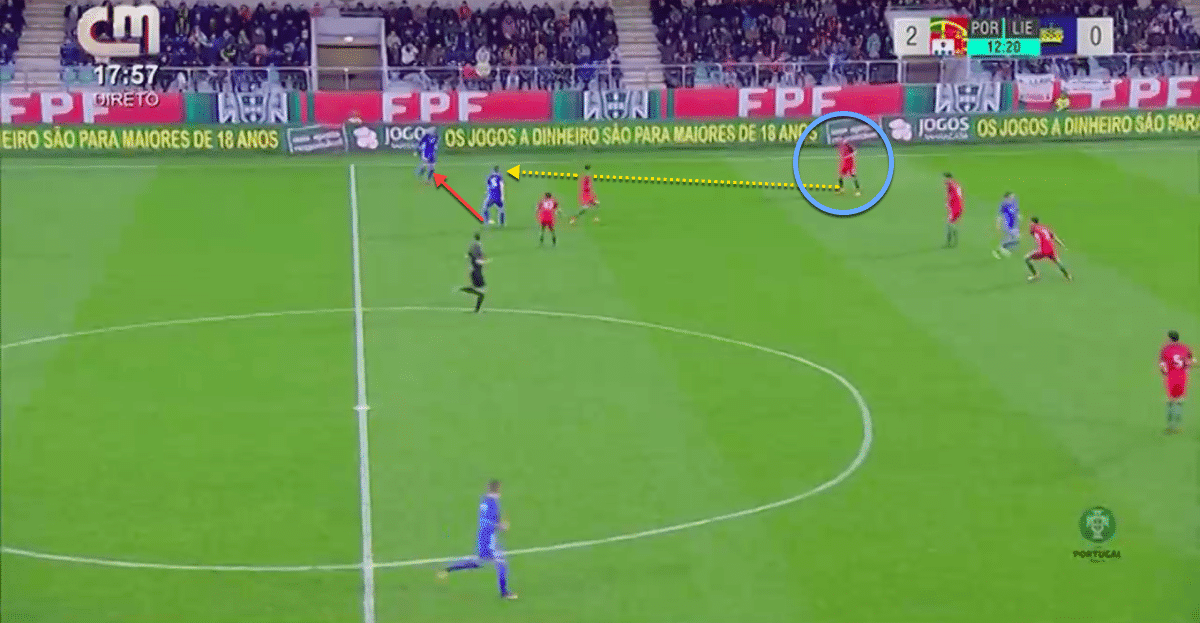 We see Dalot's proactive approach to one-v-one defending in action here, too. With the Lichtenstein left-sided player about to receive the ball in space, Dalot (circled) immediately moves to close him down. 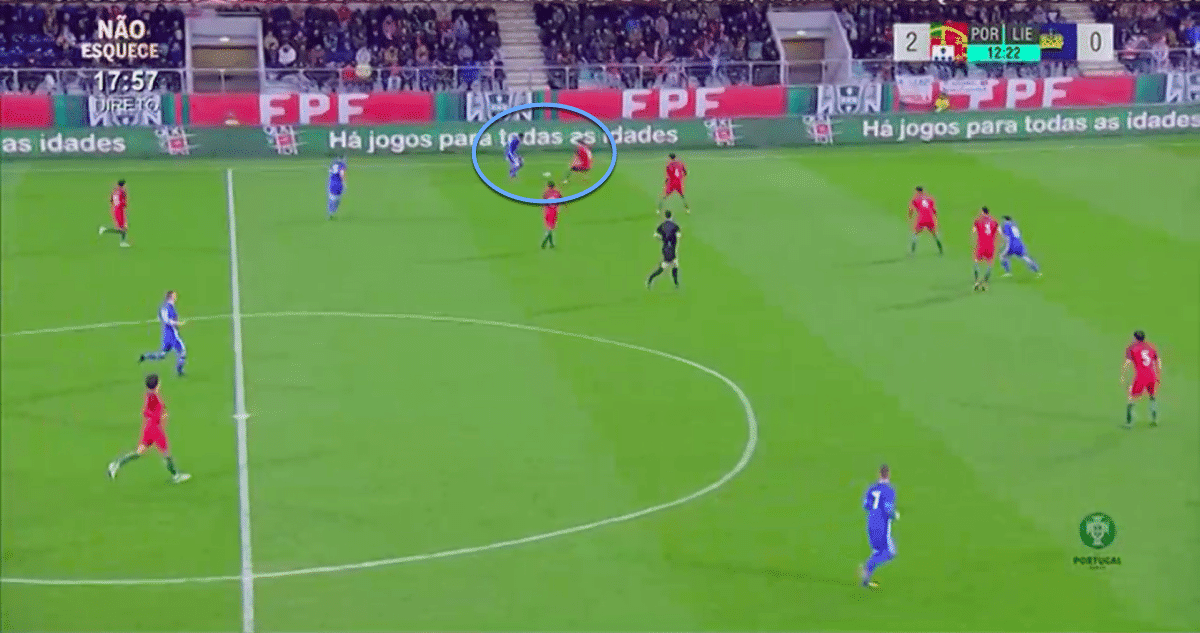 Perhaps surprised by the ferocity of the approaching Portuguese, and the speed at which his space has suddenly evaporated, the Lichtenstein player, who is being forced wide by Dalot's clever body positioning, takes a heavy touch, the ball harmlessly rolling out of play for a Portugal throw.

There have been times when Dalot has looked slightly hurried in the Porto first team, perhaps owing to the fact he was playing out of position, and this is certainly forgivable given his relative lack of experience.

For the most part, however, the youngster has shown maturity beyond his years, with the understanding of his primary right-back role of a much more accomplished player; he already has the knack of knowing, for example, when to accept the concession of a free-kick in an innocuous area in order to thwart an opposition breakaway.

A move to a huge club like United, and the realities of swapping his homeland for a new, unfamiliar country, will mean patience is required. His adjustment, however, should be slightly eased by the fact his sister already lives in England.

He may not be the marquee name many United fans crave as they hope to see their club spend sufficiently to narrow the gap to champions City, but Dalot is a young player of high potential. Nurtured properly, he could make the right-back berth his own for a decade to come.