Dakkada hosts Shooting Stars in Round 32 of NPFL on 5th June 2022.  We have a comprehensive preview of this game in this post, which includes our best free predictions as well as detailed analysis, odds and betting tips. Read further for details.

While Dakkada FC suffered four defeats in their last five games, Shooting Stars were defeated twice in their last five assignments. This will be the second ever meeting between the Nigeria Professional Football Teams, so expect some tension on matchday as Dakkada hosts Shooting Stars for the first time and hoping to overturn a narrow 1-nil defeat in the first leg. The following are the free predictions for this game by Football Whispers:

Dakkada will be the first to concede a goal

Looking at the way these teams have performed lately, there is a problem with scoring goals on both sides. We expect fewer than three goals at full-time just like it was in the reverse meeting. The reverse encounter and which is the only previous one between these teams had a scoreline of 1-0 in favour of Shooting Stars.

For the latest stats, H2H and current team form, check the tables below.

With only one previous encounter between Dakkada FC and Shooting Stars, this promises to be the mother of all battles this weekend. Only a single goal was scored in the reverse game, so we don’t expect a high scoreline in this second meeting. It is partly because Dakkada will look to avenge the narrow loss with home support while Shooting Stars come to defend the previous win or at least get a point in this trip.

However, Dakkada have more reason to worry after losing thrice in a row. They must fight to end the poor run or risk getting grounded at the bottom of the NPFL table. For Shooting Stars, finishing higher up the table even is top three ambitions become increasingly elusive. 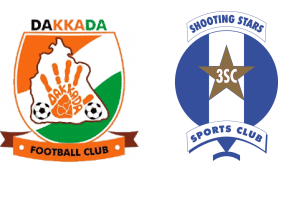 Dakkada FC vs Shooting Stars Pillars will start at 18:00 GMT+3

Which is our favourite outfit in this fixture?

We think the hosts can get a win in this game.

Where is the game venue?