Odds not yet avaiable

Dakkada FC hosts Rivers United in Uyo, Nigeria for a Round 30 NPFL fixture scheduled for 28th May 2022. Our tipsters have the details for this game in this post. The game preview also features the best free predictions and betting tips for the NPFL match.

Nigeria Professional Football League predictions by Football Whispers are well-researched. Our NPFL predictions are premised on in-depth analysis and the latest team news, H2H and available information. We have settled on the best two tips for Dakkada vs Rivers United as follows:

There is a good chance both teams will score in this game. Dakkada FC may have the third-worst home record but the visitors have had a strong offensive performance on home soil. Dakkada has scored 17 and leaked 7 goals at home. Moreover, the hosts have won 9, drawn 2 and lost 2 of their 13 home games. On the flipside, Rivers has been phenomenal on the road. They are ranked the best away team with 4W, 6D and 4L. Moreover, Rivers United has scored 11 and leaked as many goals in 14 trips. We think the visitors will score in as much as they are likely to concede a goal.

We are tipping the visitors to win. As the best away team, there is a good chance that record will continue in this trip. Another win for Rivers United will keep them right ahead as they look to widen the gap at the top. The visitors have 11-goal advantage and 7 points clear of second-place.

Check the tables below for the current form, H2H stats and the best odds from handpicked UK bookmakers.

Rivers United is top of the NPFL table and 7 points clear of the second spot. They also boast 11-goal advantage over second-placed Plateau United. However, that only translates to two games and a draw. The race remains tight at the top and this 30th game of the season could reshape the chase for the title. A loss in this game could be costly for Rivers United as they fight to secure an early crown.

On the flip-side, Dakkada FC is the second-last in the table. Interestingly, the hosts have the third-worst home record despite winning 9, drawing 2 and losing only two home games so far. Notably, these teams have met four times, winning twice apiece. All the two victories for both teams were recorded on home soil. 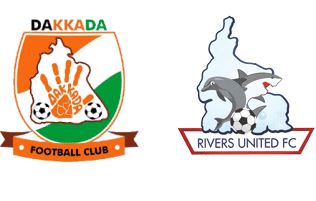 How many goals have these teams scored so far?

Dakkada FC has 24 goals in 28 games while Rivers United has netted 46 goals in 29 matches.

What time will Dakkada FC vs Rivers United game start?

Where is the venue for the game?

The NPFL match will be staged at Godswill Akpabio International Stadium in Uyo, Nigeria.