Dakkada FC hosts Akwa United on Sunday 19th June for NPFL Round 34 fixture. While Dakkada is fighting for survival, Akwa United is currently 8th and only three points shy of third place. Will Dakkada get the important survival points in this game to avoid getting relegated? Read this our preview for a detailed analysis as well the best tips for the game.

The hosts currently sit 18th and need two points to go above the relegation zone. That means Dakkada FC must either win this game or lose their chance of survival yet again. We looked at the stats, H2H information, and team news to bring our readers the best free predictions for this game as follows:

Draw will be the outcome

A draw is a very likely outcome in this game. The hosts are ranked 16 on home run. Dakkada FC has won 11 games, drawn twice and lost thrice at home. On the other hand, Akwa United has done fairly well away from home, considering how the NPFL teams have been performing on the road. The visitors have the 5th best away record. However, 6 draw, 2 wins and 8 losses away record for away is why we feel the best the visitors can get in this game is a draw.

We also don’t anticipate many goals in this fixture. Dakkada FC couldn’t do much in the last meeting with Akwa that ended 3-2 in favour Akwa. It was the highest scoring encounter between these teams. Four of the previous six meetings didn’t have more than two goals. The visitors have a stronger defence but poor scoring record. We expect a more defensive approach from Akwa if they are to get anything from this match.

Dakkada vs Akwa Match Odds and the Latest Team Stats

Here are the best odds as well as the latest stats for this NPFL fixture:

Notably, Dakkada FC will not only be fighting to get survival points but also end Akwa’s domination of this match. In five meetings, Akwa won three and drawn the other two. So, the visitors have a record to defend in this trip. 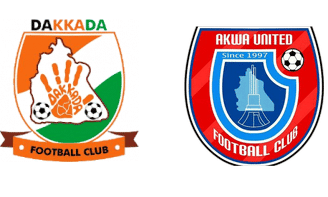 Where will the match be staged?

Godswill Akpabio International Stadium in Uyo, Nigrria is the venue for the game.

What time will Dakkada vs Akwa game start?

How many goals were scored in the reverse meeting?

There were five goals in the reverse game