The Czech Republic will host their last match of the first round of Estonia against Estonia at Generali Arena. The hosts have been advanced to the next round via the Nations League ranking but the visitors have been eliminated from the second round.

The Czech Republic vs Estonia free betting tips and odds

Here are our predictions for the Czech Republic vs Estonia.

The Czech Republic to Win

The Czech Republic are unbeaten from the last four matches and enter the game with two consecutive wins. They have managed two wins and two draws in the last five matches along with one defeat. But on the other hand, Estonia came into this game on the back of two consecutive defeats and have claimed only one victory in the last six games. Moreover, Lokomotive has done better in the group stage than their upcoming rivals and also have won all of the H2H meetings against them. Based on these stats, the hosts are likely to remain in their winning sequence against Blueshirts in the coming game.

The Czech Republic has been fine in terms of goals recently that have yielded 12 goals in the last five attempts, but their coming rivals stand on the opposite side in this case. Estonia has scored only three goals in the same duration. So we are expecting that there will be a total of under 2.5 goals in this match. Two of the last three H2Hs also have followed the same outcome.

The National Team are scoring from the last four consecutive matches but their coming rivals are lagging in the front line that didn’t score in three of the last five games. We also have seen two clean sheets from the Czech Republic in the last three H2H meetings. They also came into this game with two consecutive clean sheets and all of these facts let us predict the match to conclude without both teams represented on the scoreboard.

The Czech Republic vs Estonia: Check out the best odds and the latest stats

Match Preview of the Czech Republic vs Estonia: Easy win expected for the Lokomotive at home

The Czech Republic hammered Kuwait in their last match with 7-0 playing in the friendlies. The team has managed three wins and two draws in the first round so far and is currently in third place in their group. They still have a chance to finish in second place but have already qualified for the next round based on the Nations League ranking.

Blueshirts went through a run of defeats in the qualifying round and claimed only one win in the seven matches of the first round. The team will finish their group stage campaign in the fourth position without advancement to the next round. They lost their last game against Belgium with the result of 3-1.

Questions About the Czech Republic vs Estonia 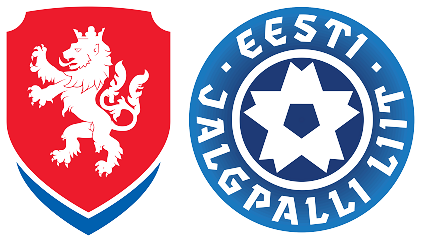 Where is the game being televised? CT Sport, DAZN Deutsch and COSMOTE Sport.

Where is the game being played? Generali Ceska pojistovna Arena (Prague).